Well ... if you don't follow me on social media, you may not know what my family is going through. A very long story short, my adored and revered Mother had to have her leg amputated below the knee last Friday. I am back in Minnesota to help and to advocate - and to cry and hold hands a lot. I don't know how I can possibly leave this warrior woman until I know she will be in good hands and is solid, so in the meantime, I'm going to share some stories from what I'm calling Clogtown - The Twin Cities. In all of this ordeal, I have maybe never felt more stressed out. I never planned to be here so long, so there is work to think about, my mother's health, her home, where she'll go next ... all of it. I've driven by The Salt Cave Minneapolis for a few years, and wondered about it. I looked it up and one of the things it claims to help is stress, so yesterday I found myself taking a break from the hospital and headed to The Salt Cave. 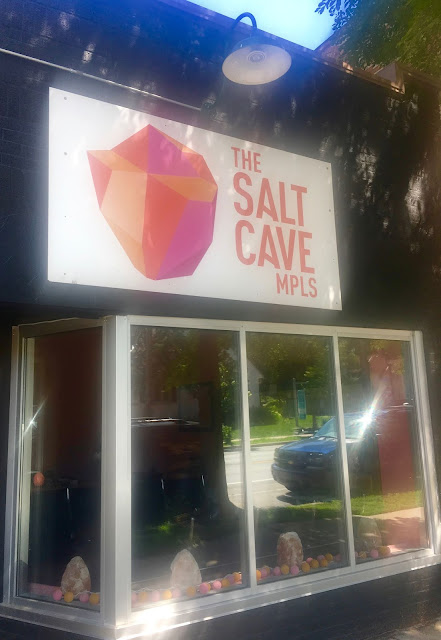 A little storefront on Nicollet Avenue doesn't really look like much, but once you are led downstairs into the salt cave, it's pretty cool. One room that is bathed in a rose quartz-ish light and lined with lawn type chairs, and the floor is covered with so much salt it's like having your bare feet in sand. 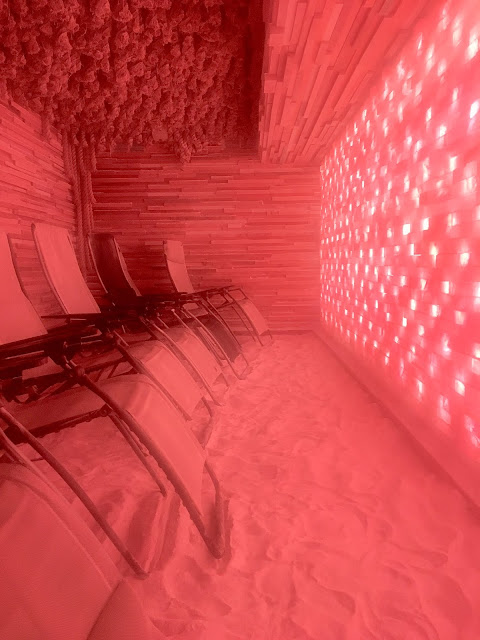 This beach vibe is enhanced by a soundtrack of crashing waves, and the attendant told me to sit in the chair closest to this vent for the best salt experience - but that I would get salty. I sat down and tried to just breathe and focus the breaths along with the ebbing and flowing waves on the sound system. I'm a terrible meditation person, because my mind immediately races to ten thousand places - especially now. Focusing my breathing to the waves did help a bit, but I still found myself going over what calls and emails I need to make, and all that jazz. 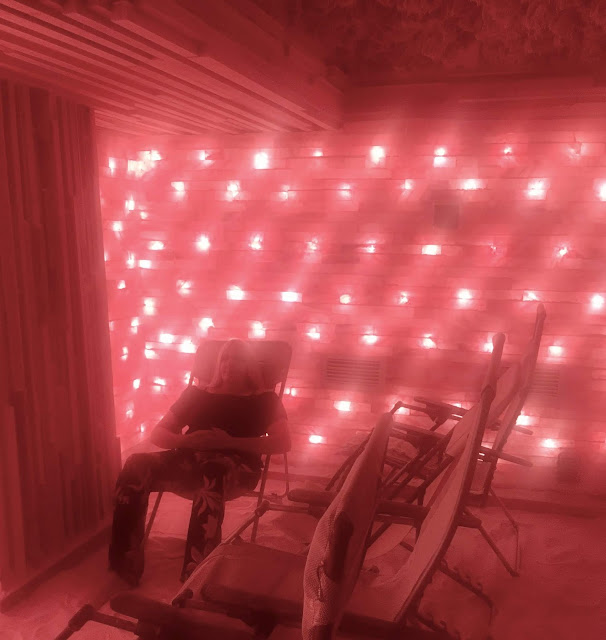 I was alone until an older gentleman came in and sat a few chairs down. We paid no attention to each other, and after a while I forgot he was there. I felt tingly a couple times, and also nearly nodded off another couple of times. It was supremely relaxing (as opposed to the Dragon City Acupuncture at Southdale cacophony I endured for a chair massage. I don't know how a place meant to relax and de-stress can stay in business across from Dave & Buster's!), and when I briefly opened my eyes, I saw that my clothes and body was entirely covered with salt, as if I'd fallen asleep outside in a light snowfall. I was told that it works via your breathing, but the Himalayan pink salt also goes in through your pores. I was covered an inch deep, so I should be real good. 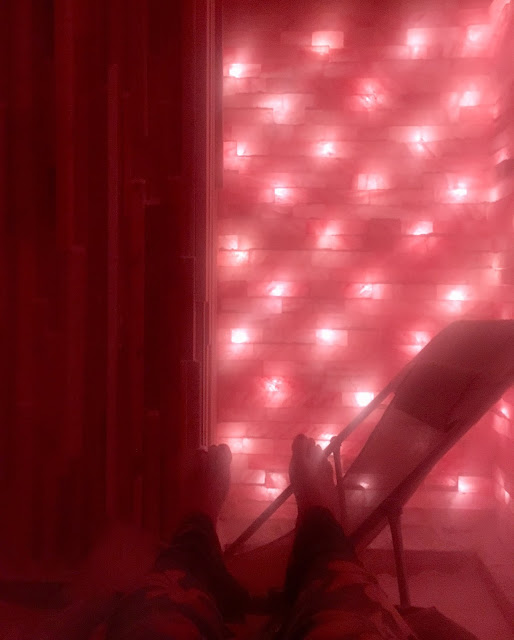 After the 45 minutes session ($30) was over, the lights gently get brighter and you start dusting off the salt. While doing so, I realized that the tension I had felt at the base of my skull was no longer there. The slight headache I'd had between my eyes was also absent. I felt as if I had just woken up from an intense nap, though I never fell asleep. The only physical thing I could really complain about after was that I was extra thirsty - makes sense. I asked the man who was in there with me how it was working for him, as I'd been told he comes every week, and we had waited for him to start. I'd still be there listening to him (and I was fine with it) if the attendant hadn't come downstairs to say she had to close up, but he was EFFUSIVE in how much it had helped him. He had a rare lung thing that he went to the Mayo Clinic for, and after regular sessions at The Salt Cave, he'd been told at his follow up visit that the thing was gone and that his lung capacity had actually increased! I believe. 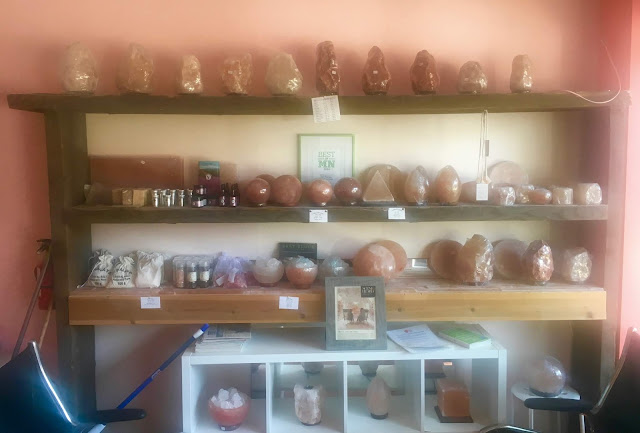 There are several afflictions the salt sessions help with, from asthma to allergies to skin problems, but even if you just need a break from some real harsh reality, like me, The Salt Cave really can help you. My spirits, attitude, tension, and stress had all been somewhat lifted, even if for just 45 minutes. The invisible part, like salt in your pores, must help too, because I feel physically fantastic today. Hey ... whatever helps in times like these! They also offer yoga classes in there, and gong and sound bath things, and you can arrange to get a chair massage while sitting in your session - next time for sure. I like that Minneapolis is into groovy things like this, and realized once again that you can find your Venice anywhere, as it's inside of you. But Venice could use a Salt Cave too! Check it out ... you'll be better for it.

And Have a HAPPY 4th, Everyone - from sea to shining sea and every lake and river in between!