I got back to town just in time for the opening night celebration of the L.A. Art Show, and as usual, it did not disappoint. There is just SO much art that you really almost need to attend every day if you think you might be able to see everything ... and you probably still won't. There is truly something for everyone, and as I heard a dude say to his friend, "Dude, aren't you getting inspired?!" You can't help but be. 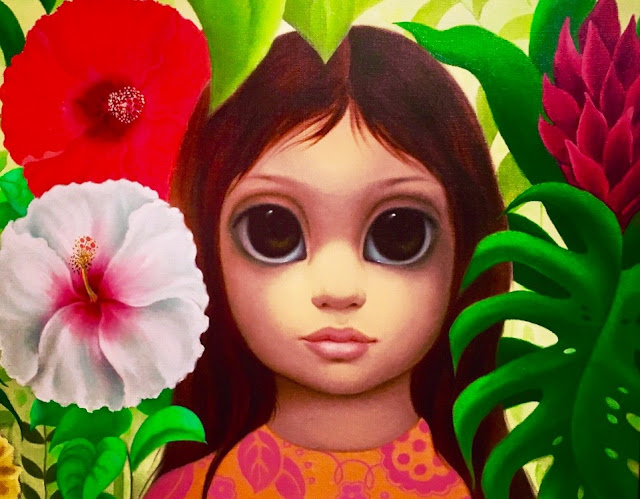 Margaret Keane (of Big Eyes fame) was an honored with a lifetime achievement award this year, and it was very cool to see her work up close and personal - especially after watching that film and knowing her back story. Whoa. I loved her Girl From Kaanapali, 1971 the most. It's happier than anything I've ever seen from her. 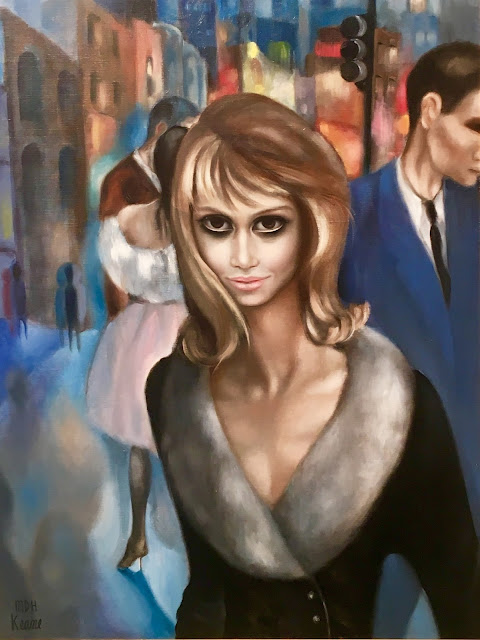 I'd never seen any of her work with adults in it, and it's really something. Her characters (as in the above Escape, 1962) draw you in with their eyes, and make you want to know more. There are also very recent works, like up to 2015 by the now 90 year old artist. The trip downtown was worth it for this alone, but oh boy, was there ever SO much more. 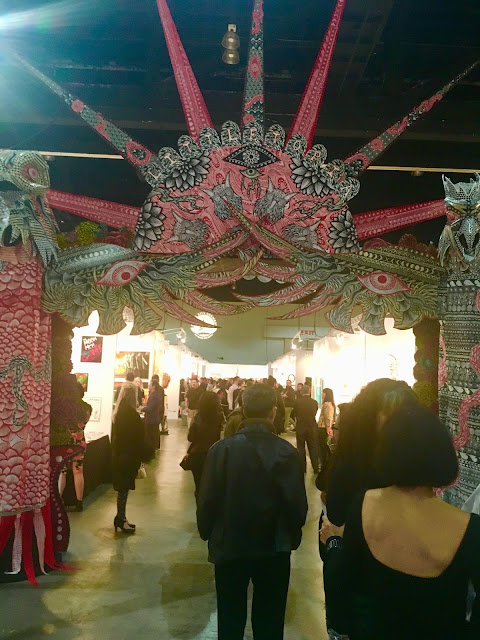 Littletopia is always my favorite section of the L.A. Art Show, and always the most interesting. Curated by the fine folks at the Red Truck Gallery (from New Orleans), they have the best stuff, in my humble - and honest - opinion. Red Truck is so cool, and I made their Rachael Cronin pose in front of the wonderful Albino Deer piece by Chris Roberts, whose work I simply must own one day. She's incredible - and the mother of gallery owner Noah Antieau. Awesome. 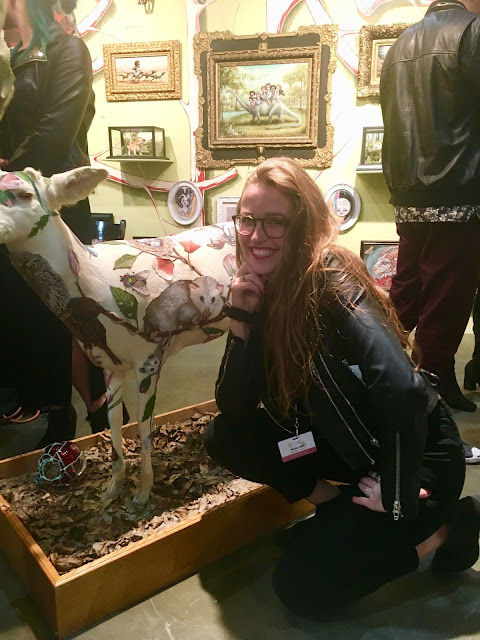 I loved the works by Vance Lorenzini, with an entire booth featuring his work. There were the 12 stations of the cross, with words like "Truth" and "Love" emblazoned across the tops. 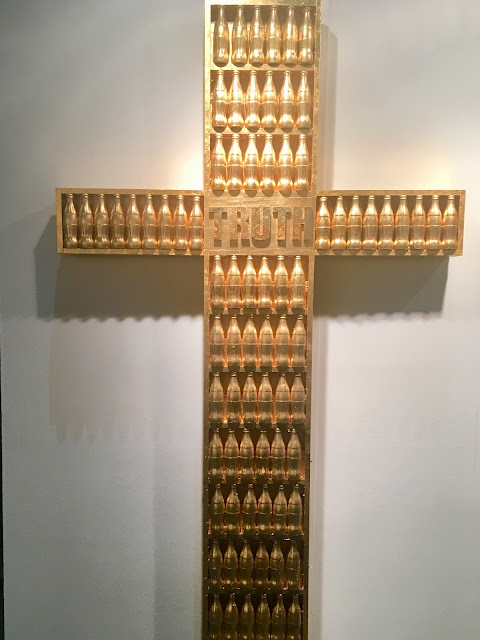 There were assemblages with pop culture icons embedded within, like the excellent pieces featuring lyrics by David Bowie (as we pass the two year mark since losing him). 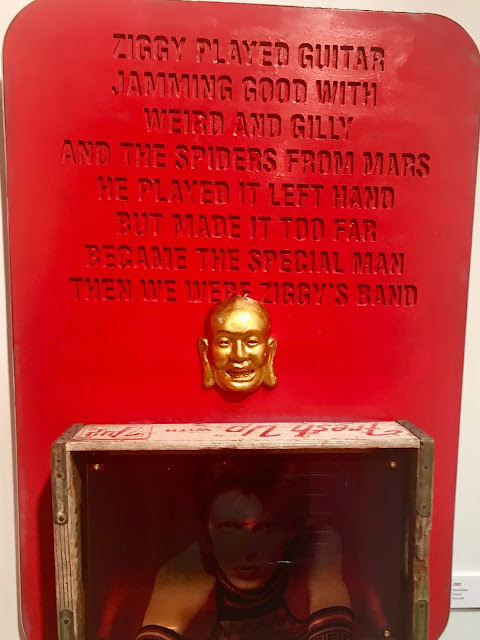 Everywhere you look there is something great to look at, so much so that it almost gets overwhelming, especially when you're running into friends and trying to get something to drink. (*Forget about getting food on opening night unless you're there lined up the second it starts. In all the years I've attended this wonderful event, I've never made it to the food section in time to taste a single thing. Oh well, it's about the art. Eat first.) The good news is that near the food area is the L.A. Arts Online booth, so we got to see and compliment the wonderful Paige Petrone on all of her hard work for this event every year. Venice representing! In this time of strong women (like Paige), there was a piece by Kim Dong Yoo showing off some awesome women. 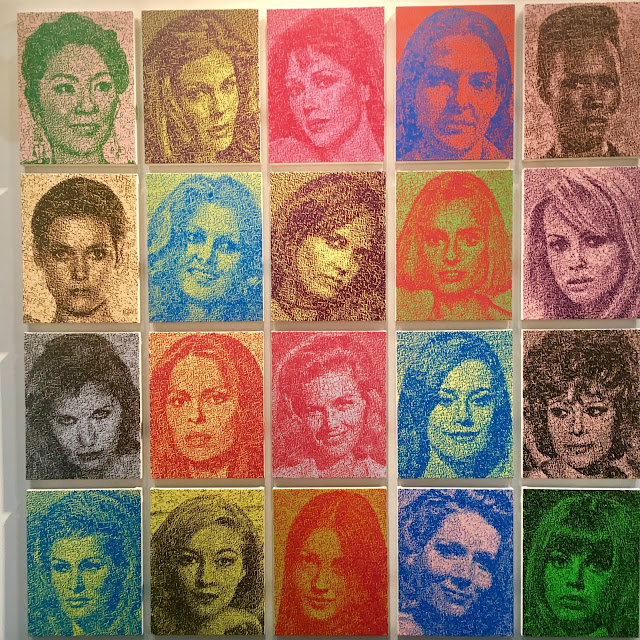 Art means so many different things to everyone, and there truly is something to appeal to everyone at this massive show, representing artists from all over the world. There was a bike covered with fish from Japan that was probably someone's favorite piece there. 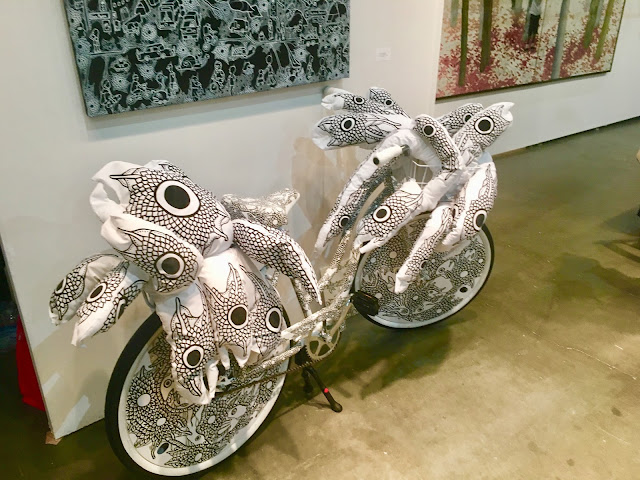 There are always fun installations at the show, and this year was no different (if a bit less dramatic than the live naked lady in fresh flowers from a couple of years ago). The big crowd pleaser this year was Left Or Right - A Healing Project (1998-2018) by Antuan, rows of red punching bags adorned with the most punchable faces in the world. There were particularly long lines to punch Trump, of course, and it was very personally satisfying to me to smack George W. Bush in the kisser, but I was a little disappointed there was no Paul Ryan or Steven Miller there. OOH, are they punchable! Kim Jung Un and Putin were also popular to punch. And rightly so. 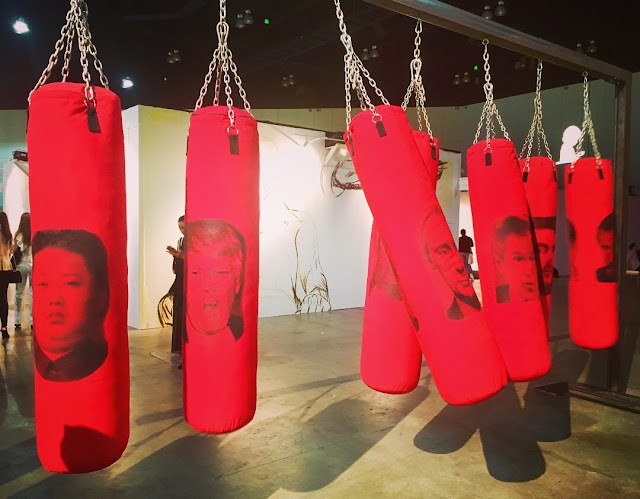 Interactive exhibits are always cool, and this time around they had a thing you took off your shoes and walked on and looked at stuff (I didn't have the luxury of time to do so, so might have to go back this weekend) that people seemed to like ... 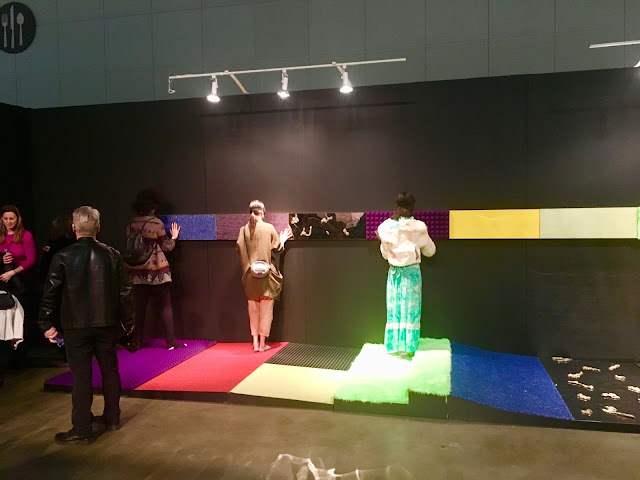 ... as well as Brainstorming: Empathy by Victoria Vesna and Mark Cohen - a thing where you could don alien heads and have your brain waves communicate through color and sound to the other person. Trrrrrippy. 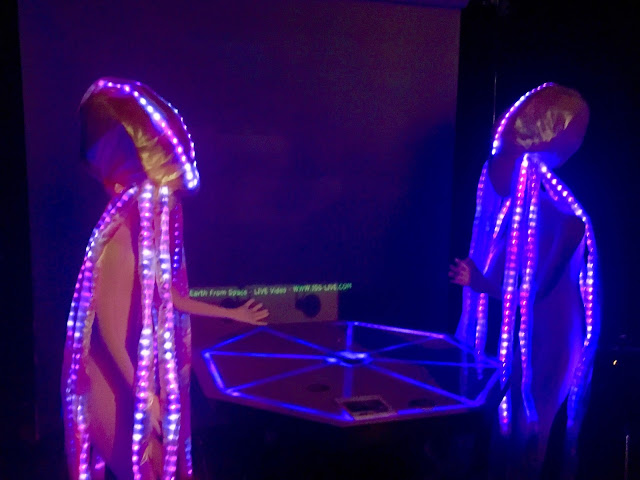 I was happy to see a booth featuring the works of Dan Eldon, the young journalist who was killed in Somalia in 1993, and was the author of The Journey Is The Destination - a personal favorite of my brother's and mine. Eldon's mother and sister have taken on his mission of storytelling to influence hearts and minds. 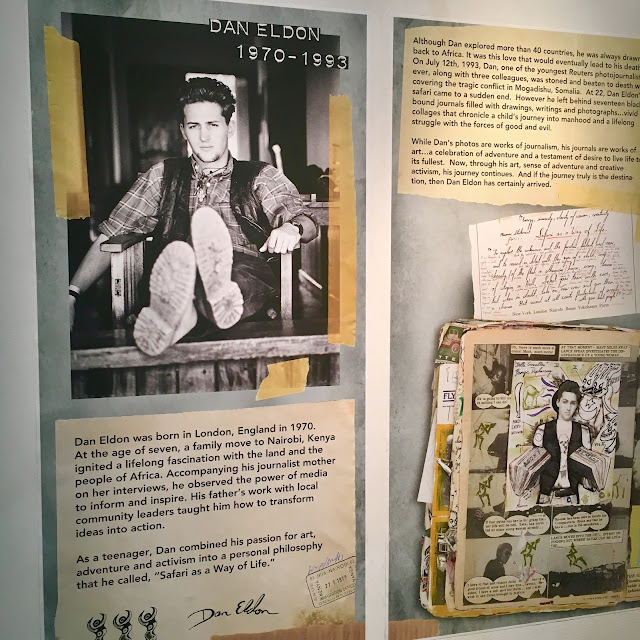 To that end, this was also an interactive situation, where you could fill out postcards with your personal thoughts and missions to add to a wall to create insight as to how "Connection is the solution." Very cool, and also very, very important to our global village in times like these. Seeing Eldon's personal journals there was also very moving and great. 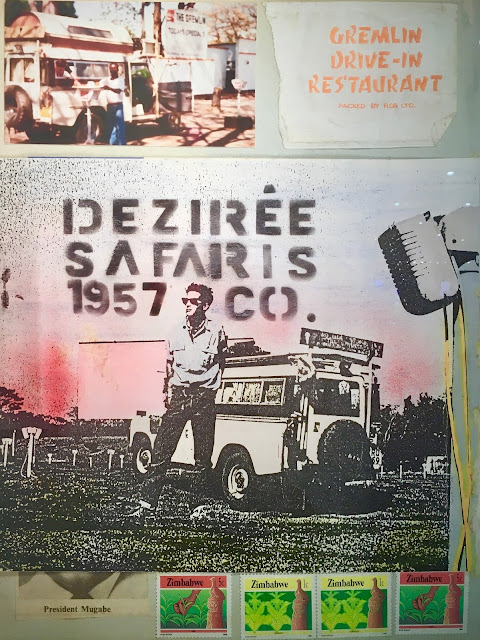 Right after that I walked by a piece that summed that all up ... Matt Smiley was right. His Lessons In History, 2017 tells us the truism, that the world is just not that simple. 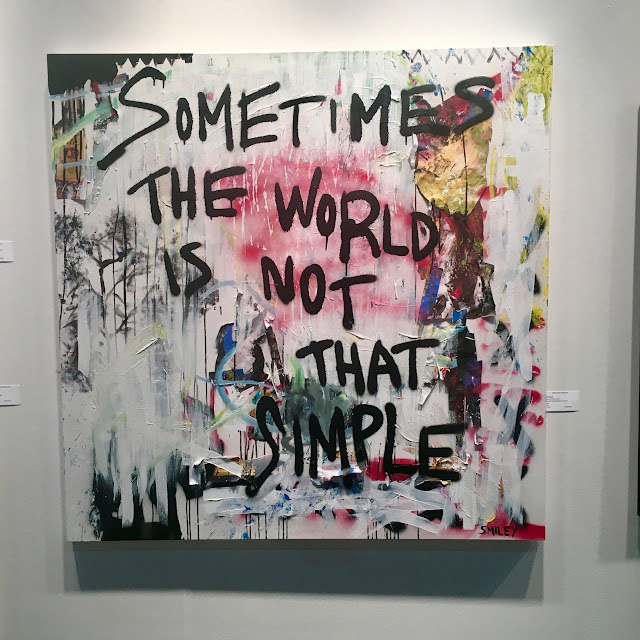 Many works made their statements, as all the best art does. I particularly enjoyed Mass Incarceration by Ryan McCann, showing a weed life in what looked like prison cinder blocks. Good one, as L.A. legalized marijuana as of January 1st, just as the little weasel Jeff Sessions is trying to make it the same as heroin again. Please. 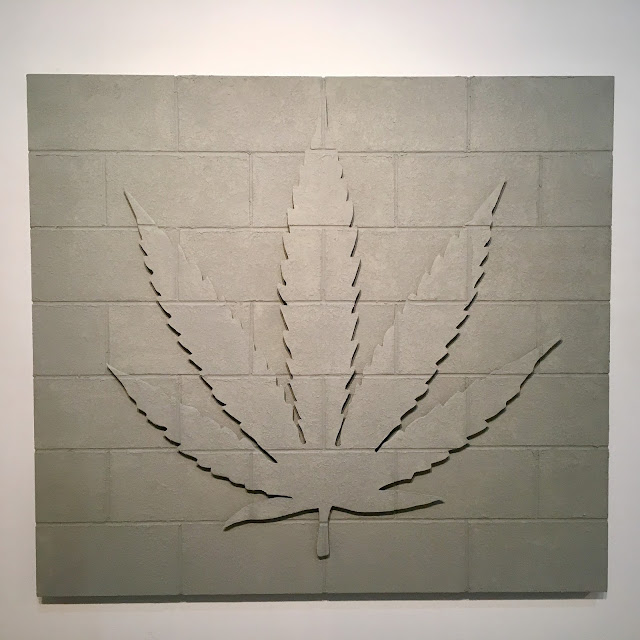 This re-cap is all over the place, as were my meanderings around the massive Convention Center. I'd bump into someone and they'd tell me I just had to see the butterflies made out of international currency, so off I'd go ... 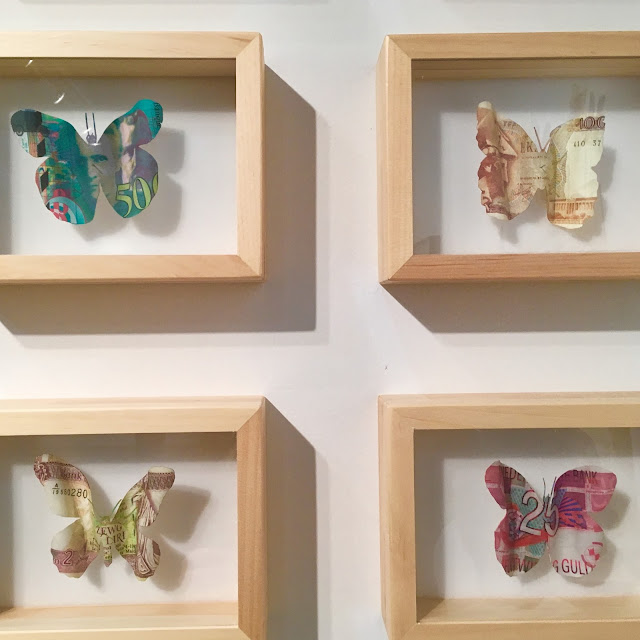 Someone would say to go check out the bedazzled punk rock buddhas, and off I'd race in an entirely different direction. 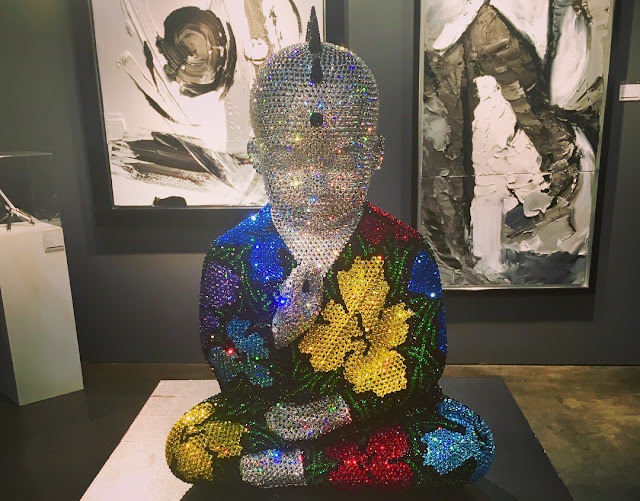 Inevitably, in my travels back to the other side, I'd pass by some other thing that would stop me in my tracks, like the statue of Rocky punching the side of beef that changed dimension as you circled around it. (I'd often be racing so fast that I didn't catch the name of the artist. Sorry if I did!) 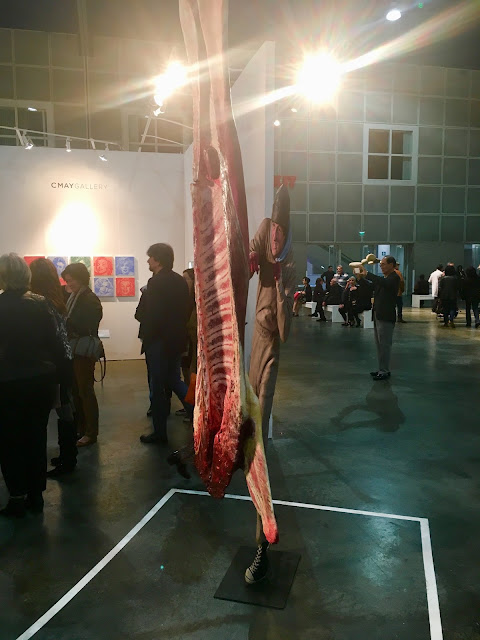 There was a fantasy "Spaceboat" installation that looked like something a Wes Anderson type kid would sail away in, brought to us by Bunnie Reiss at the Superchief Gallery in L.A. Loved it. 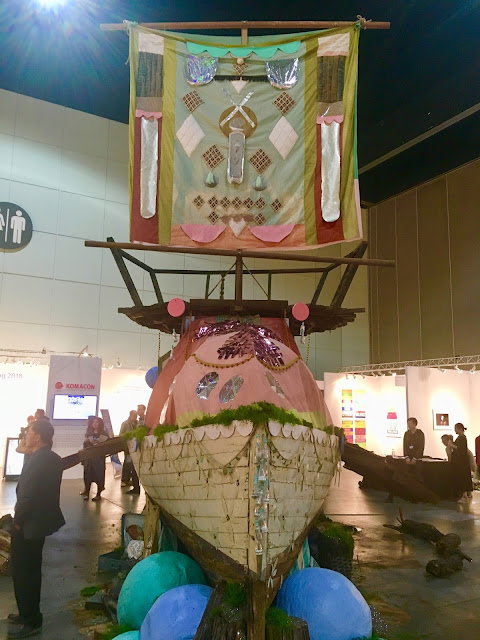 Jeff Gillette created a hood out of Hollywood, with a Hollywood sign disintegrating into a shanty town that was pretty heavy. 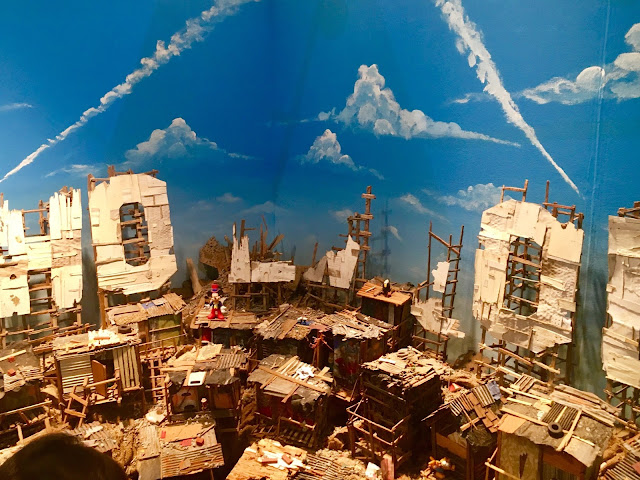 I loved the needlepoint pieces by Suchitra Mattai, with idyllic scenes featuring people with lasers coming out of their eyes. Why not? 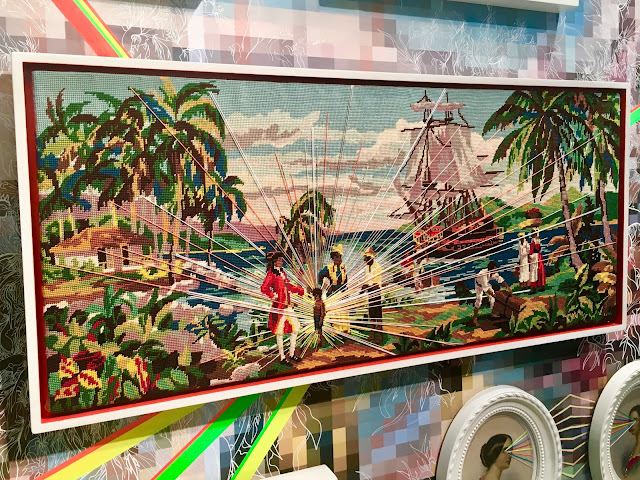 For What It's Worth was a mixed media guitar by Victoria Roberts, inspired by the Buffalo Springfield song that was pretty cool. 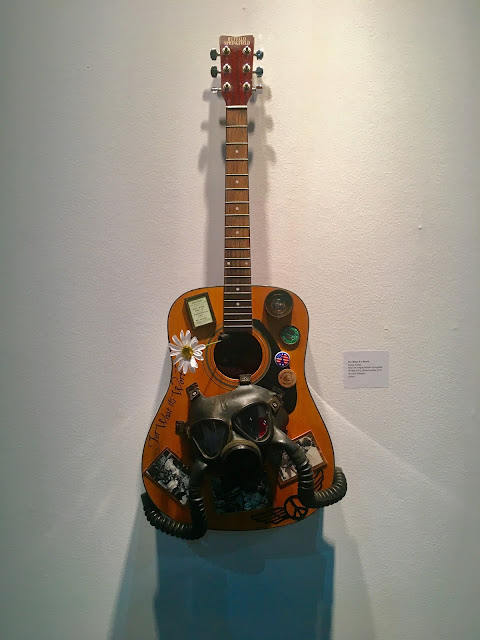 This year's crazy realistic head by Kazuhiro Tsuji was the artist Mark Ryden. Not as recognizable as the previous years' Frida Kahlo, Warhol, and Dali, but still as trippily real as ever. 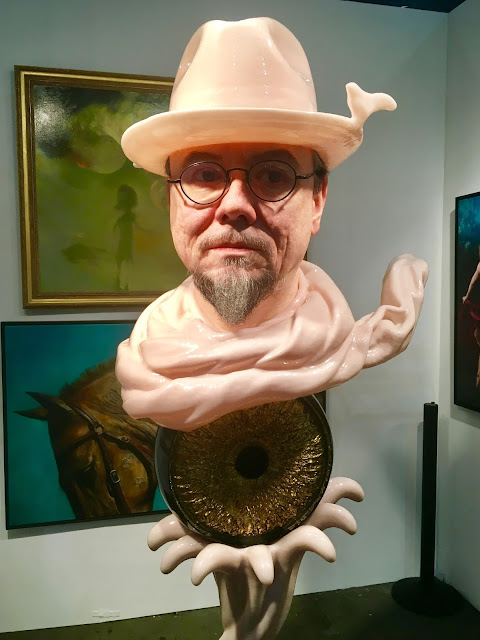 The L.A. Art Show lets you know that art can be a sculpture of a pile of thousands of pennies ... 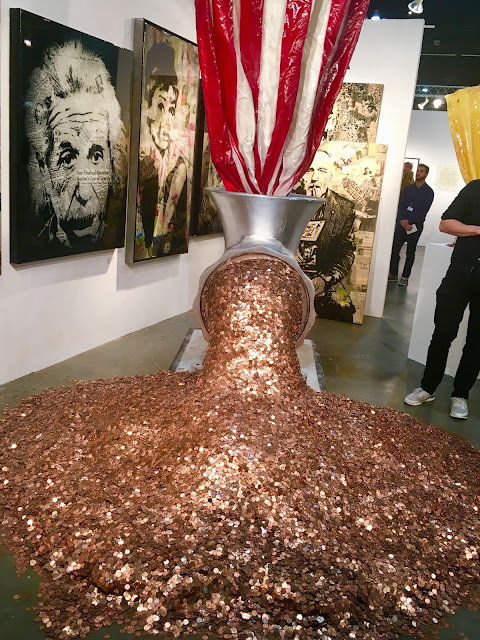 ... an archway made out of wood (that you could probably build yourself for loads cheaper) that I loved and wanted for my own pad one day ... 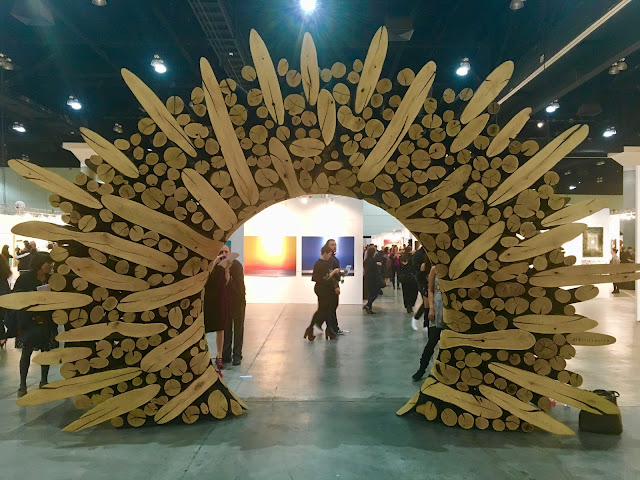 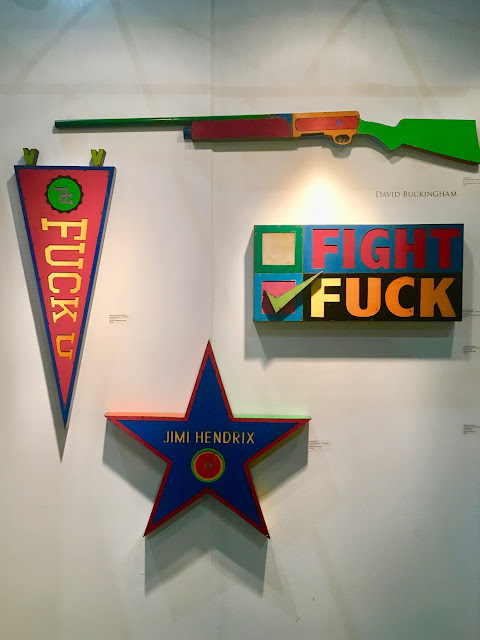 ... or even a clipboard stating that one will no longer draw flying penises in class.  Again, why not? 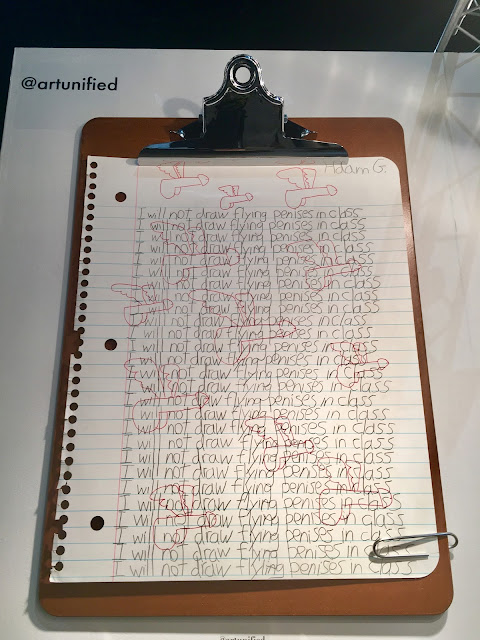 All in all, art is awesome. The L.A. Art show itself is awesome, in every sense, including size. Thank goodness that so many people still care so much about art, as it and its creators are needed in the world now more than ever. To shape culture and life, to question it, and, ultimately to celebrate it. And as long as this is, it only scratches the surface, so you really gotta get there yourself if you also love art.