There are some things you just can't really understand how much they mean to an entire state unless you were born and raised in Minnesota. The Minnesota Vikings. Prince. And maybe the accent. 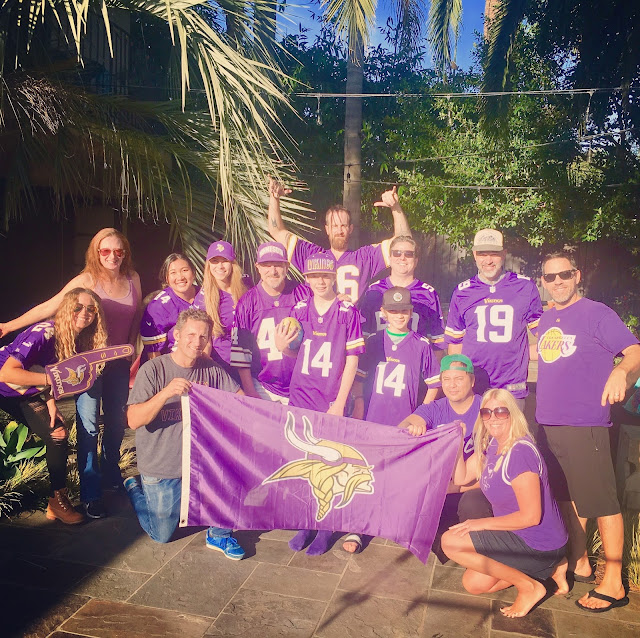 When I moved to California, it almost made those things MORE special, because I missed them. The good news is that there are several Vikings in Venice, and all of us have never been more happy than when the "Minneapolis Miracle" took place last Sunday. I'm still laugh-crying about it, especially when you re-watch the play for the thousandth time, and realize that IT REALLY HAPPENED. And it will never get old.

You have to know that things like this just do not happen to the Minnesota Vikings. We've always been the ones on the other end of miracle plays, or more often, they've just blown it. But we love them anyway. To be a Vikings fan is to know how to handle disappointment. It - and the extreme weather - are probably why people are so nice back home ... you just have to be. You have to look out for each other, and you have to keep up your chin up through crushing blows.

But not on Sunday. Sunday was our turn to REJOICE!!! You've never heard such pure jublilation than when Case Keenum threw a miracle pass to Stefon Diggs who made a miracle catch, and ran it in for the first ever walk-off NFL Playoff touchdown in history. The crowd slowly realizes that all might not be lost, and then it become pure pandemonium. Just listen ... !

Even then we couldn't believe it. We were sure it would be called back for a penalty, or out of bounds or some such nonsense, but nope. Not this time. It was real, and our involuntary, out of control celebration really hasn't ended. Calls and texts came in from across the nation, as everyone knows how much that moment means to a Minnesotan.

If you're not into sports, you would still get the excitement of this miracle. I had just returned to Venice from Minneapolis, and all I wanted was to be back there, yelling and hugging with all my people. They could probably hear us from here, though. It was - and is - just so good.


I was sad to see the garbage New Orleans coach, Sean Payton, mocking the crowd with our "Skol!" chant when we very briefly trailed on the scoreboard ... but his karma was almost immediate. HAAAA. He screwed us over back in 2009 with "Bountygate" (Look it up. Awful.) We STILL rooted for New Orleans in that Superbowl (Well, I did), because the people of that city needed it after the nightmare of Katrina, but now it's our turn to go for it. Fairly and squarely, I might add. And they should root for us. The Vikings still have to play the NFC Championship this weekend, of course, but we're feeling pretty good about it. As far as we're concerned, there is no other team to cheer for. The Vikings are by far the coolest team left, and if victorious this weekend, they will be the first team in history to play in their own town's Superbowl. Minnesota will be going OFF. Who can't get behind rooting for that?

No matter what happens, no one can take away that moment of collective JOY on such a scale that we'll all remember it all of our days. There is a meme going around of an angel Prince stepping in to make the block for Diggs on that last catch, and I honestly wouldn't be surprised. It was that miraculous. 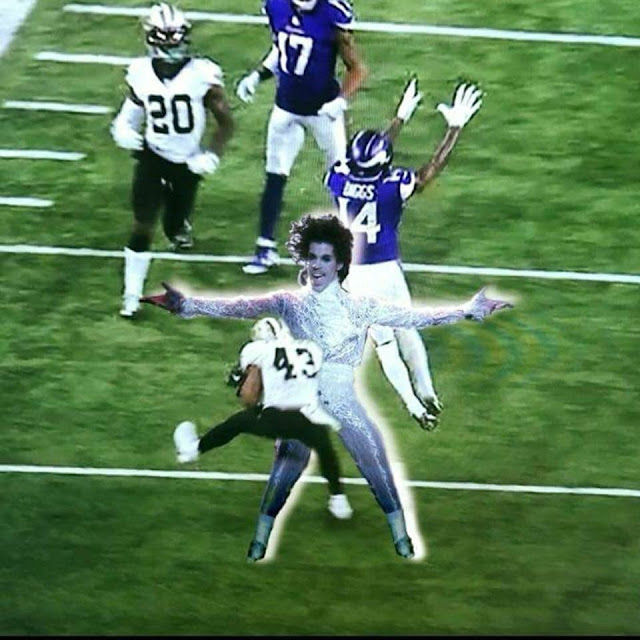 You gave us all something to celebrate the rest of our days. It's more than a game, it's the spirit of a people. The spirit of home. SKOL VIKINGS!!! BRING IT HOME!! But above all, THANK YOU!!!
Posted by CJ Gronner at 2:12 PM