2017 is almost over, and I think we're all breathing a collective sigh of relief. I know we all breathed one together last night at Apogee Studios for the KCRW Best of 2017 shindig, in the best way possible - through the most acclaimed music of the year. 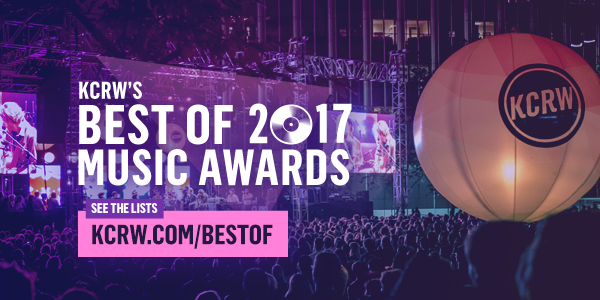 Music and public radio lovers gathered at the excellent Santa Monica facility run by producer Bob Clearmountain to count down the KCRW D.J. picks for their favorite albums and tunes of the year. Small bites and delicious drinks were served, and the newly added cocktail tables in the studio made it all the more easy to enjoy. Early arrivals were treated to a smooth d.j. set from Reggie Watts, who we discovered is as funny as he is talented. He was soon joined by our host, Morning Becomes Eclectic D.J. Jason Bentley, clad in a holidazzling shiny jacket to be proud of. When Bentley asked Watts what was the highlight of his 2017, he responded after some thought with, "I saw this kid pick up a penny ... " and he was right. That was about as good as it got ... besides the music. 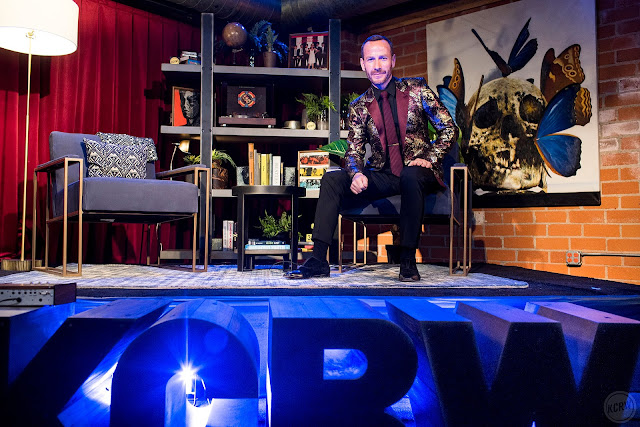 Each album selection was announced by a KCRW D.J. opening a sealed envelope, and after an extra rough week in Southern California with all the awful wildfires and an awful government, everyone was ready to celebrate with some good year-end jams.

The list kicked off with #10, announced by Rachel Reynolds, who books the bands for MBE, and chose Father John Misty as her favorite live session of the year. The tenth spot was given to Elbow for their Little Fictions. Reynolds called it "Incredibly beautiful", and "Absolutely stunning .. you can feel the warmth of their living room in Manchester, England. They played "Magnificent (She Says)" from the album, and it was enough to immediately put it on my to-get list.

Travis Holcombe was up next to announce #9, which was Beck's Colors. "I like happy Beck, and it's been a long time since we've heard him. He's on my personal Mount Rushmore of musical icons, and Happy Beck is even better." When asked if it made his personal list, Holcombe replied that it did not, cracking everyone up. They played the track "Wow", prompting the guys to say that they think Beck has been listening to his kids' records a lot in this return to his "Odelay" sound.

#8 honors were presented by Dan Wilcox, and given to Washed Out for their Mister Mellow. This one DID make the Wilcox Top 10, who said he got lucky because this was the album he had listened to the most in 2017. They spun "Hard To Say Goodbye", and I could see why they gave these accolades to this groovy chill-wave group. Cool.

Smooth-voiced Garth Trinidad came up to throw down the #7 spot, which went to Dan Auerbach for Waiting On A Song. This one was definitely on my personal list, and my album of the Summer. It sounds like Summer. It was also my favorite Apogee session of the year, as I was introduced to this lovely album live in this very room. Trinidad remarked that Auerbach was "Our new generation of greats, when we've lost so many ... he dispels the myth that white people don't have soul." Bentley agreed, calling Auerbach a "Genius", and when they spun "Cherry Bomb" it was not hard to hear why. LOVE this album.

Newest D.J. José Galvan took the stage with his drink in hand, ready to reveal the occupant of the #6 spot. Chicano Batman took it home for their excellent Freedom Is Free. It made Galvan's personal list, and he spoke to the fantastic year this band has had. An epic sunset slot at Coachella that by all accounts was especially memorable, and Bentley commented on how they were the only band there that was really SAYING something, socially and politically. They got the biggest applause so far of the evening, and it got louder when they played the title track, "Freedom Is Free". The bass line gave Galvan shivers, and Bentley added that "They also have style, which I appreciate." Clearly. Chicano Batman is a group you want to know more about, trust a sister. 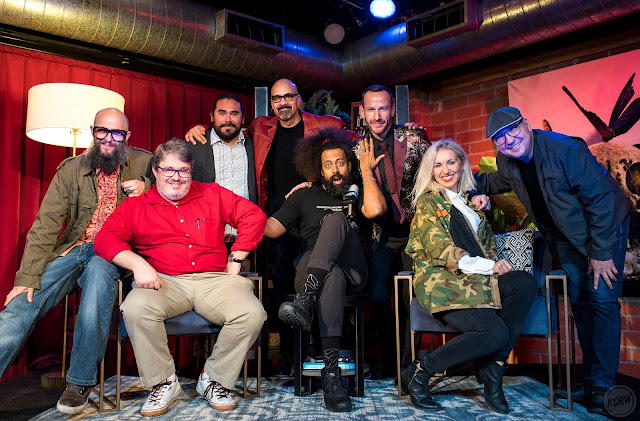 "You're such a character, I love you.", said Bentley by way of welcoming Jeremy Sole to the stage, to which Sole replied, "I like me." Between his shirt and Bentley's jacket, they combined to "break the internet" as they said, (though this was for a radio show). Sole got #5, and gave it to Gabriel Garzón-Montano for his Jardin, which garnered huge applause. "We can talk about this album all day long,"  Sole said, adding that Garzón-Montano knocked it out of the park this Summer at the Annenberg Space outdoor concert opening for Miguel. He dedicated this album to Prince, so he had me at hello, but it is truly exceptional. Everyone was shouting requests, but they played "Fruit Flies", which was so good it had Sole kicking both feet straight out, yelling, "Come ON!" They also played "Crawl" and Bentley shook his head, saying, "It's SO Prince." It would have been fine if they'd played all the tracks, but we had a list to get back to. When Bentley asked Sole what he was looking forward to in 2018, he answered, "Impeachment!" - which received perhaps the biggest applause of the night. Rightfully so. Get Jardin though - it's great.

Eric J. Lawrence is a real music scholar, and you could kind of tell he wasn't that into the #4 spot that he announced .. LCD Soundsystem's American Dream - which made neither his nor Bentley's (nor mine) lists. Lawrence called it basically a James Murphy solo album, but called LCD Soundsystem "one of the most potent live bands around", and said "I have no problem with the new album." Not exactly a ringing endorsement, but the list makers and Grammy committee must have thought differently. OK.

"I'm having 'Best Of List' remorse!", said Chris Douridas when he took the stage. It really is so hard to choose from so much good music every year, but it has to be done, and the #3 spot this year went to King Krule for The OOZ, probably my own least favorite album of the year. Blech. Like, I'll change the radio station if it comes on, and I love me some KCRW. I don't get why people like this stuff, but they do. They played "Dum Surfer" which made me sick, and made Douridas say "I thought it delivered on his weirdness." Yeah. It did. Moving on ...

D.J. Valida gave #2 to "one of the best poets of our time" - Kendrick Lamar for Damn. This one made Valida's list, my list, and probably everyone else's list at #1, because, just DAMN. His social consciousness, his production, his lyrics ... "He does it all so beautifully," Valida said, and I wholeheartedly agreed. Bentley clearly did not, cutting short the track "Love" saying, "Alright, alright...". Not everything is for everyone (*See: King Krule), I get it, but on this one Bentley may be all by himself. 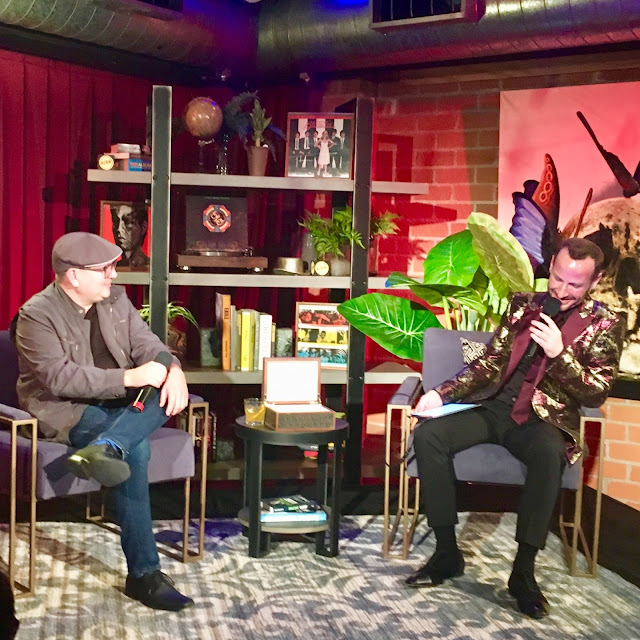 As I might be in thinking that KCRW's #1 would not have made my any-numbered list, but Raul Campos came up and gave it to The War On Drugs for A Deeper Understanding - which I do not have for the choosing of this album in the top spot. Not my cup of tea, but Campos called their songs "epic" (meaning in their length, I believe), and called their Apogee Session his favorite of the year (I missed that one. On purpose.) I don't mean to be snarky, it's just not my jam. The honors were accepted by Atlantic Records' Brian Corona, who thanked KCRW for "sharing all the musical joy in this room", which there really was. A joy both tangibly felt and sorely needed, especially this weird and trying year. An acceptance video by The War On Drugs was played, and they were rightfully grateful.

Best Song of the Year honors went to Amber Mark for "Lose My Cool", and Best New Artist was given to Tom Misch. How all of the year's music can be gone through and chosen as best is a hugely daunting task, but KCRW does it well, and stresses to the listener once again how very, very important music is to us all in our daily lives, and how important KCRW is in delivering it (their pledge drive is on now - thank them with your support!). Individual D.J. Top 10 lists can be compared HERE. 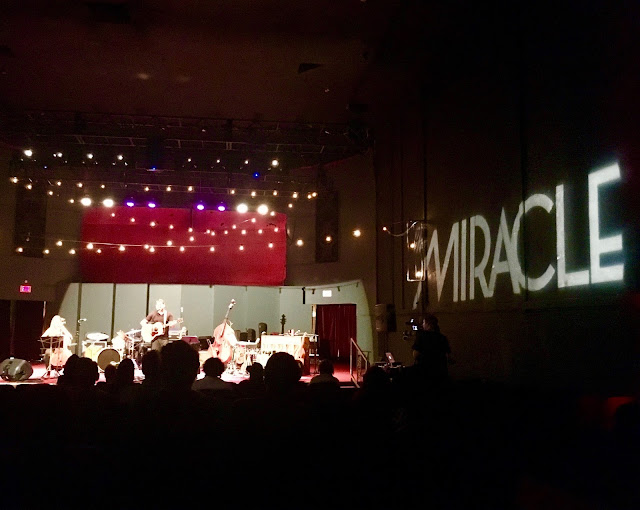 Bentley thanked everyone for coming, though we should have been thanking him. The party carried on to celebrate this year's victors, but I raced across town to The Miracle Theater in Inglewood to catch a benefit show (for The Miracle Theater Foundation) from Tom Freund and friends. I love the Miracle space, and though I missed a bunch of the music, I caught Freund backing up the excellent spoken word poet, Adwin Brown to a rapt audience. It was another round of awesome music, making us feel lucky we live in an area with so much abundant and wonderful live musical offerings. 2017 is almost behind us, and music was probably the best part of it. THANK YOU to the music makers, and to the people that bring it to us as well. Cheers to an even better list - and world - next year, everyone!