The 6th Annual Venice Sign lighting was held on Saturday, and it just keeps getting better. It is one of the best events of the year in Venice, mainly because all of your old friends come out for what is truly a community event. Like the Abbot Kinney Festival, this is one for the locals. Tree Man was even back in town! 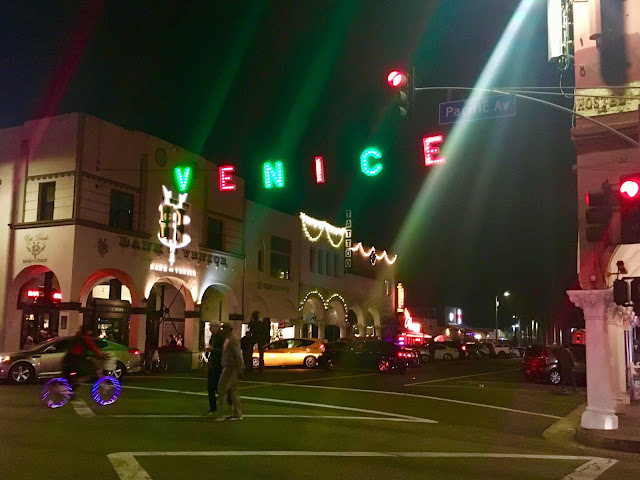 This year featured the addition of fake snow blowing down from the rooftops, so the entire proceedings had more of a real deal holiday feel, and as I heard one friend say, "It's like Edward Scissorhands!" It was both lovely and trippy to look up in the Venice sky and see snow falling while it was warm enough to not really even have to wear a jacket. 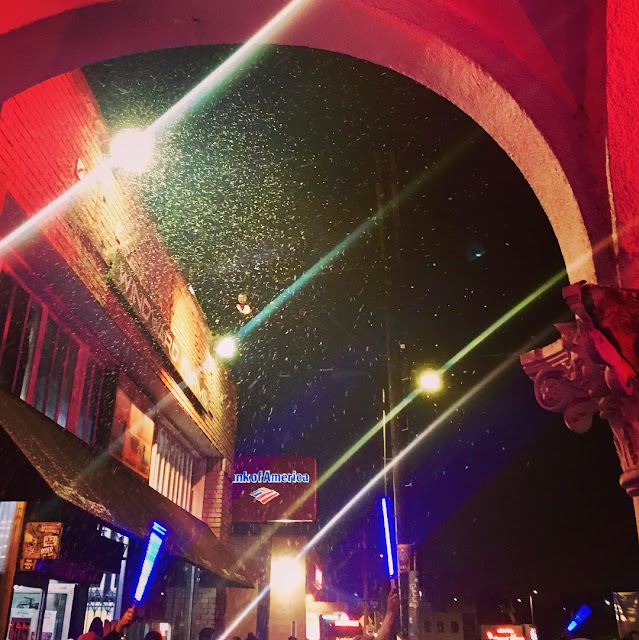 Windward Avenue was already packed by the time I got there, and it was great to bump into one friend after another, all there to kick off the holidays with their friends and family, and have a whole bunch of fun. The whole thing is simply adorable, and it was made even more so by the excited kids that got to have their poster art honored from the stage. 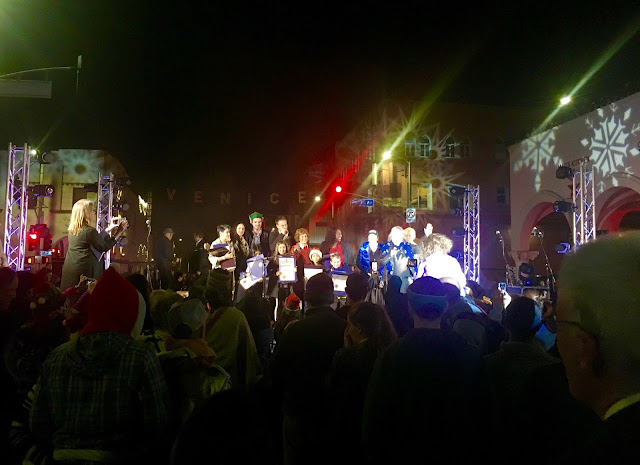 One of little pals, Rowan, was so excited about the official certificate he got from the poster contest, he was showing it off and beaming about it the rest of the night. I think he thought it was even cooler than Santa ...who was pretty cool this year. 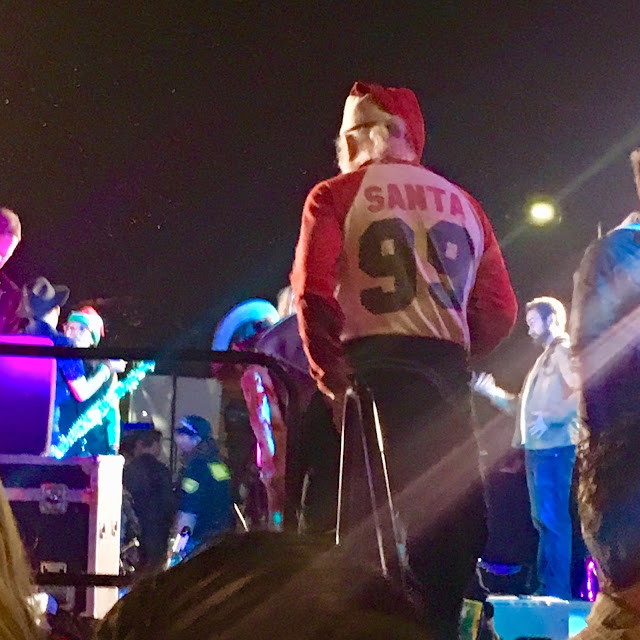 Booths were set up all along the curbs, with hot chocolate, snacks, face painting ... all of that good street carnival type stuff. Venice Paparazzi was there so you could have your fun, holiday-themed photo taken. Everyone was feeling festive, and it showed. 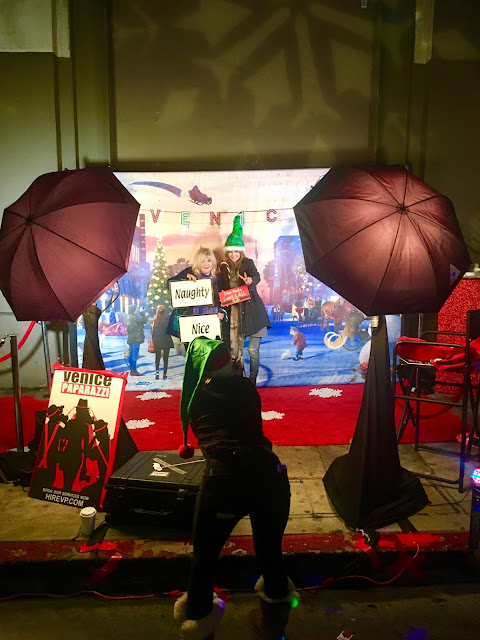 Great White is the new spot in the neighborhood this year, and they hosted a fun party alongside the street party. There was the usual tipping of the hats to all the Chamber of Commerce people and local politicians, and then things got extra fun with Al Jardine of The Beach Boys leading everyone in sing and dance alongs to all your favorite surfy Beach Boys tunes. It was awesome. 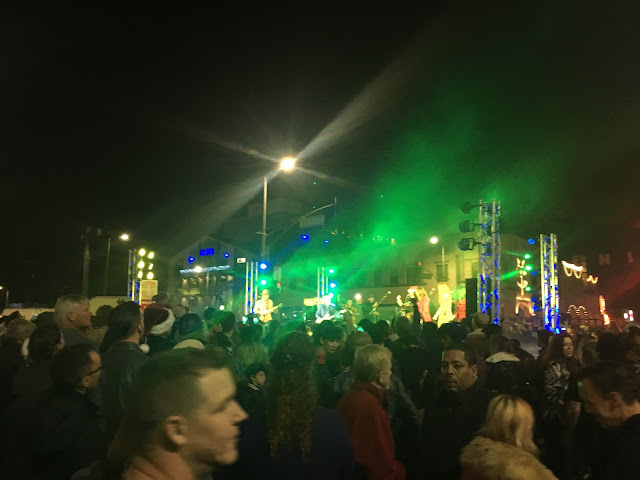 All the talking and introductions meant that the sign lighting actually happened well after its appointed 8 pm, but they finally got a platinum-haired Matthew Modine up there (who I guess lives in Venice now) and we all did the countdown, and just like that, the sign was lit, and it's Christmas time in Venice! 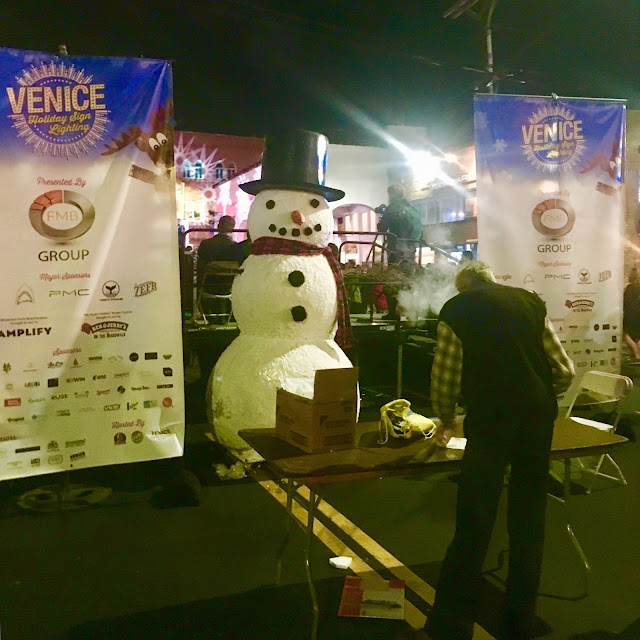 Revelers filled the intersection at Pacific and Windward to take their holiday card photos, and then everyone dispersed off to the after-parties going on all around. I hit The Townhouse and Surfside, both of which were going off and full of Santa-hatted partiers. The fog rolled in late, making the skies look actually wintery, for added effect. GOOD times with REAL Venice. 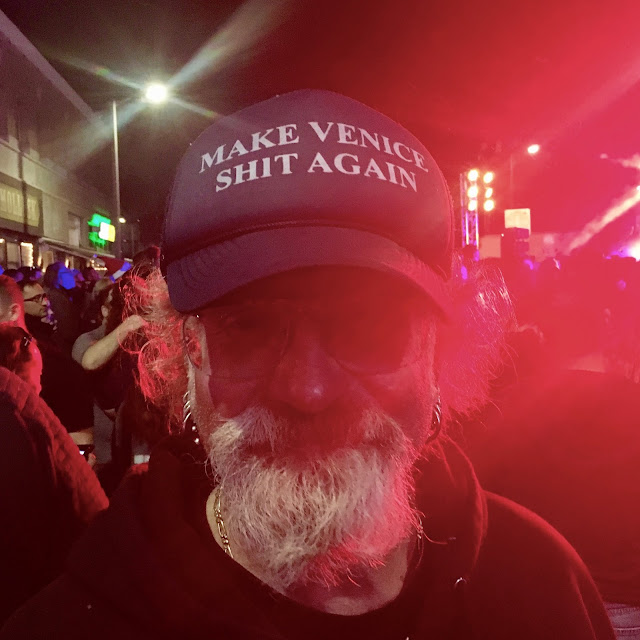 Venice kids may have been a little confused the next day when there was MORE snow and a DIFFERENT Santa on Abbot Kinney for the Holiday Stroll. It was a warm and sunny day, and the fake snow being made in The Brig parking lot got a bit more melty as each moment passed. 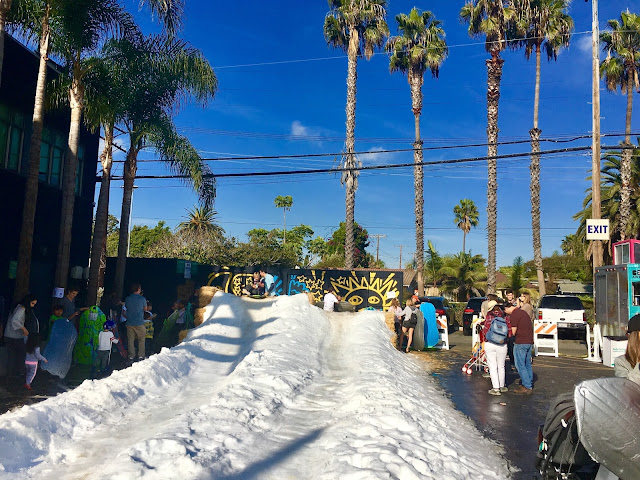 The little ones squealed with delight as they sped down the wet and icy little slope made there for them to sled down in Venice's version of winter. 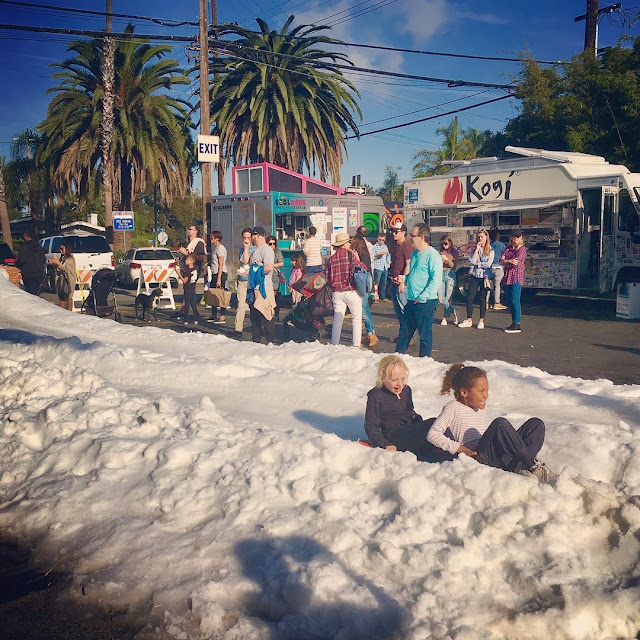 This day's Santa was awesomely authentic, with a genuine twinkle in his eye, and and actual jolliness to his laugh. That little bit of magic that you can see in the kids' eyes when they see him and talk to him about Christmas is truly what makes it all so special. And so sweet. 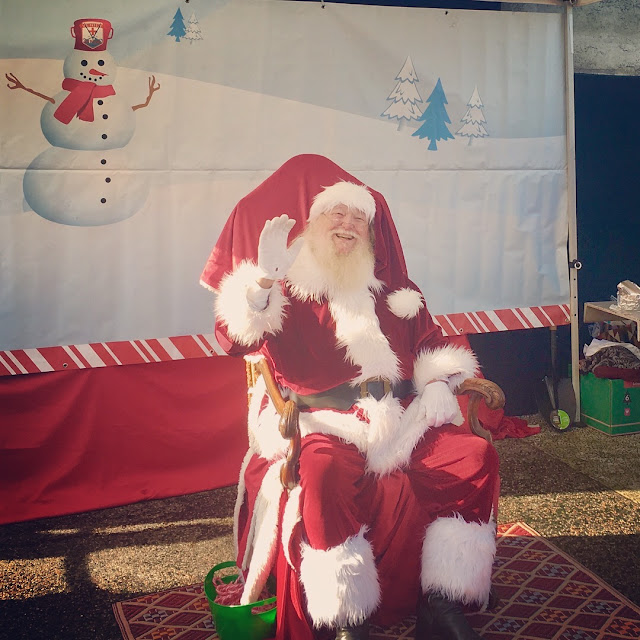 There was a cute little craft camper where you could make all kinds of holiday themed arts and crafts, as well as the ever-present and important face-painting situation. The line was too long or I'd have been all over that myself. 'Tis the season! 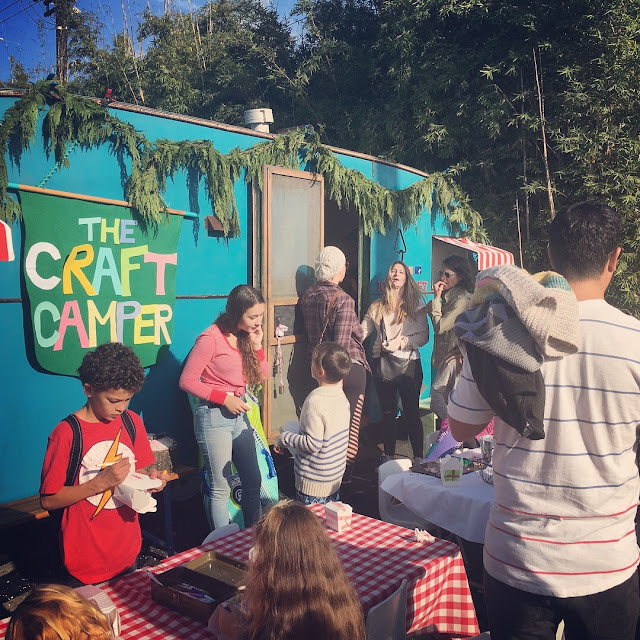 The food trucks were there, of course, and once again, the best part of this whole shebang was seeing the friends that these days otherwise try to avoid the Abbot Kinney mayhem. It's worth it, especially when you see how absolutely thrilled the little grommets are. 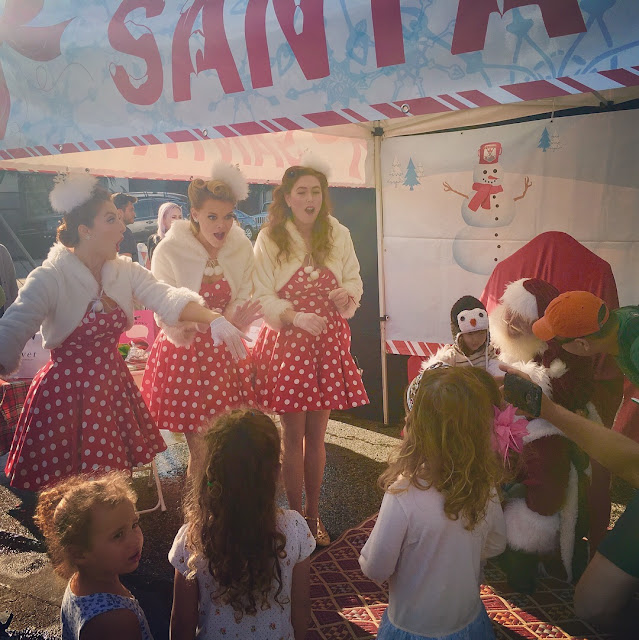 There wasn't too much else going on as far as the Holiday Stroll went this year. I didn't see the usual fun Carolers, and the only real stores that seemed to be that into the theme of the day were Burro, Principessa, Huset, and Show Me Your Mumu, who had a great little hot chocolate bar set up for their holiday shoppers. The corporate stores all looked like it was just another day of taking your money, so the strolling was cut short as we declared it time for a drink - namely the yummy spiked apple cider at Wabi Sabi, to keep the holiday vibes going. We sat in the window seats and watched the shoppers and sledders go by, laughing and jolly themselves ... it's infectious! 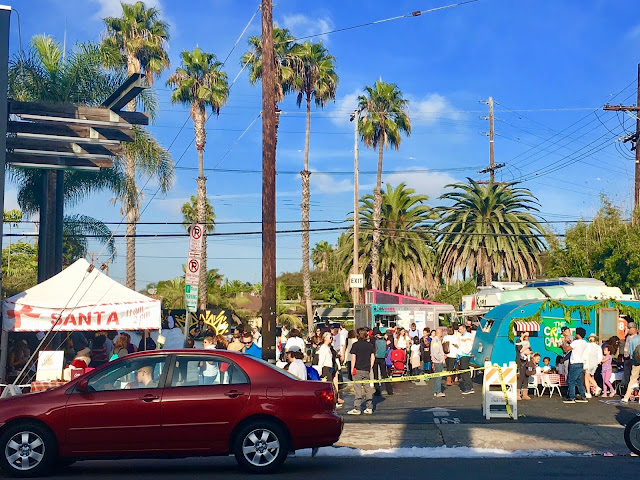 It gets real busy from here to the end of the year, so let's try to remember the good vibes and wishes for peace that this season has always been really about. It seems like everything has been so dark lately, that people are really going for it this holiday ... like let's have the best times ever possible, because you never know what's coming next. But anything can happen ... it snowed in Venice! 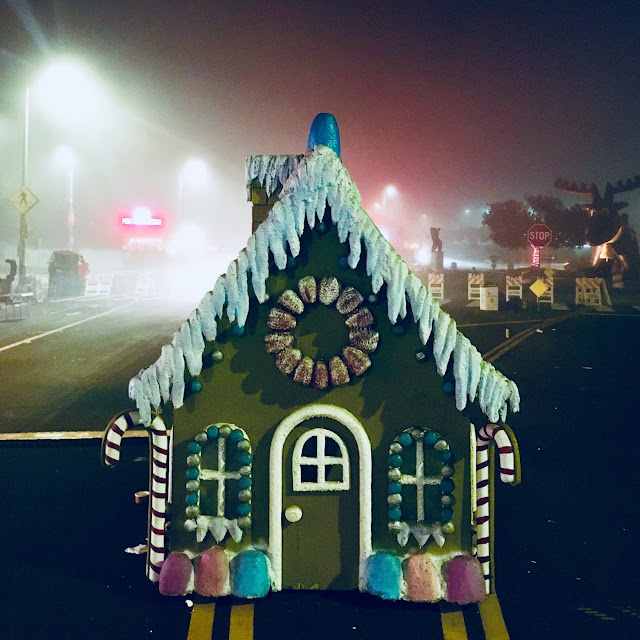 Let's love all of it.