Well. Here we go again. Another sketchy situation I have to move out of in Venice. Today is my last day at my Cabrillo Avenue pad that I've lived in since 2013. I have no idea where I'll live next ... or even if it will be in Venice. Obviously that is the hope, but with things going how they are here in our quickly changing - for the worse - Venice ... everything remains to be seen. 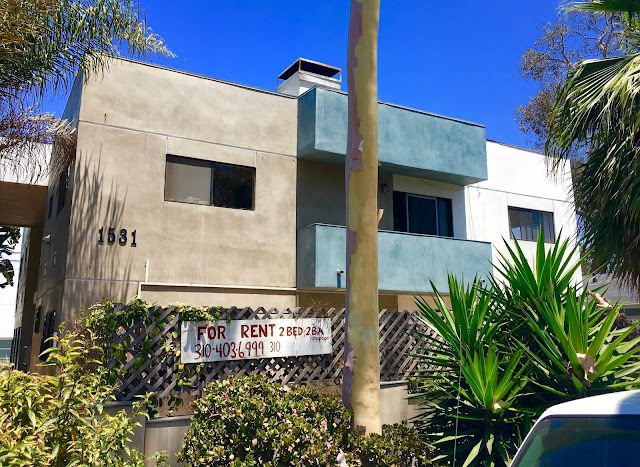 My first Venice landlord, the disgusting Phil, decided it was fine for him to enter my place on Venice Boulevard whenever he wanted. He would engage in fun activities like going through my underwear drawer, hanging out on my bed, all that good stuff. When confronted, he lowered my rent without admitting any guilt - other than lowering my rent. He didn't share with his parents - the real owners - why he lowered my rent, so they decided to evict me for not paying what they thought to be the full amount. His criminal activity was not on the docket in our civil trial, so I lost, and had to be out of my home of over a decade in 30 days. It sucked.

We had to move out of the next place because it was under constant jack-hammering construction for months downstairs, and then when it was finished, they told us they were going to put in wall to wall carpeting over our wood floors so we wouldn't disturb the new, posh downstairs neighbors. My friend's dog would have ruined that carpet in one day, so out we were - again.

I've been living in harmony on Cabrillo now since 2013 ... until today. Last year, when my dear friend roommate decided to move to Oregon, I had to get a new one. I found a girl from New York who would only be here part time, because she had a restaurant out there. Great, right? Not great. She went behind my back to the landlord to try to rent out her room while she was back in NYC, which is strictly forbidden. When told no, she decided to break her lease. The landlord told her she could - if she found a replacement for herself. Now, at the time I was working on a tv show that had long hours and I was never home. The NY girl found another girl, and she seemed ok enough. We had a trial period - that I was always gone during - and then she signed a new lease here. And it has sucked ever since.

Psycho Susie the Squatter. This little piece of work would bust into my room so often, I had to get a lock on my bedroom door for the first time ever. She didn't even have her own spoon, so was constantly using everything of mine. She ate my food. She set up a home office in the living room. Since the eviction notice appeared, I have returned home FOUR times to the stove burners left on high for hours, like she's trying to burn the place down to get out of it. She never paid a utility. And then I recently found out she hadn't been paying her share of the rent either (we paid separately). For five months. Now SIX. I only found out because I came home to an eviction notice on the front door. As I HAVE paid my rent every month, I figured great, let's get this girl out of here and I can get someone new in here that actually is a responsible adult that pays their rent, etc. But nope. The landlord, an elderly woman from Minnesota - so I automatically thought she had to be cool - was over it. She didn't want to have two people here anymore, and as it's not a rent control building, that's her choice not to renew my lease. But I didn't do anything wrong! I've never called her to fix anything, always taking care of things myself so as not to bother her. I never complained when our water has been shut off for months at a time due to plumbing problems. I shoot the breeze with her. I thought she got it, she was from the Land of 10,000+ Lakes! But nope. A neighbor told me she asked if they thought she'd get in trouble if she maced a sleeping homeless man in the alley behind the building. Not at all Minnesota Nice. More like cruel. Heartless.  And that's how she was on the phone the other day when she told me I needed to be out on July 1st. When, meanwhile, the squatter roommate is still here until the sheriff comes for her! And I'm out. Wow. Just wow.

Thank goodness I have a wonderful brother and mother who helped me throw my whole life in boxes in two days. Thank goodness my brother has a garage I can put them in. Thank goodness I have friends who love me and have my back, and so far, I don't think I'll have to sleep outside. This all comes at a time when freelance work is extra hard to come by, so it's ultra stressful, believe me.Yet, somehow I feel like things will be cool. The second I hung up with this cranky, inhumane lady, I was done. Like, BYE. I don't need this. I've put up with a hell of a lot the last year, and now it can just be in the past. The place is nowhere near worth it, and I was killing myself to hang on to it with my claws, when it's actually a bit of a dump. Venice has us all paranoid that we have to hang on to places that are so sub-par, just because nothing else is affordable. My friend in Minnesota has a beautiful, massive house with a giant pool, that costs less than my crappy Venice digs. And I don't want to give one more dime to someone that lacks humanity. We can all do better, for ourselves and each other.

Venice is a trip. Last week, I was the Neptune Queen on Saturday, having the time of my life. This Saturday, I was sweaty and in tears, moving my whole life to who knows where. Bukowski said, "What matters most is how well you walk through the fire." So, I'm planning on strutting through this fire, without a glance back. The absolute perfect Venice palace might make itself available to me, or I might have to actually live in Neptune, under the sea. Or some awesome travel opportunity may make itself known, now that all my stuff is packed away. Or ... or ... or ... it's wide open.

I hope that I will be able to remain in my beloved Venice and tell its stories, and I humbly ask your help in that endeavor. If you hear of a decent place, or an actually cool landlord for once (Unicorn?) - not the ones that are just trying to suck all they can off of the gigantic, gentrifying teat, or a writing gig in Spain, a Circus to run away to, or anything remotely cool at all, I'm all ears. Thank you for your continued support and love, dear people of Venice. We gotta stick together now more than ever.

Bye, Neighbors! Thanks and love ... and please keep our hummingbird nest safe. That was the best part of this place.