The long awaited new album Wow and Flutter, from our much-loved local folk/country/awesome singer/songwriter Amilia K Spicer was celebrated in a cd release show and party at Beyond Baroque last Saturday night. Though Spicer is often on the road, Venice has been spoiled lately, as Spicer also played at the closing party for Abbot's Habit last month - which got me very excited about this album and show. Beyond Baroque is a wonderful venue, but in this case did a little double-booking and both Spicer's show and Suzy Williams' annual Lit Show were scheduled for the same time, the same night. I brought this to their attention and a little juggling was done, and now The Lit Show will be next Saturday, July 22nd, also at Beyond Baroque. Some folks showed up to Spicer's show expecting Suzy's, and were treated to a wonderful show anyway, with another one on deck for the following weekend, so everybody won. 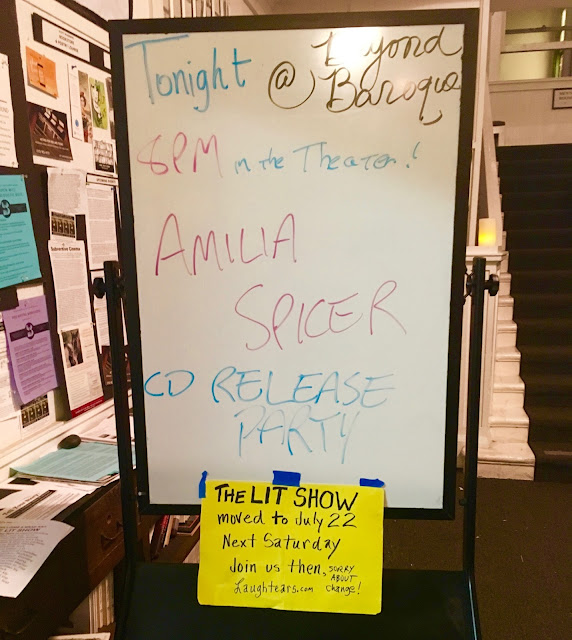 It was a beautiful evening, and the courtyard behind Beyond Baroque was filled with friends, family, and fans of Spicer, all there to get down with some fantastic music and fun. There was food and drink, and a lot of catching up with our local luminary musicians that mix and match with each others' shows all the time. It's a true musical community, and always excellent in whatever the combination is ... and this time it was Spicer's turn. 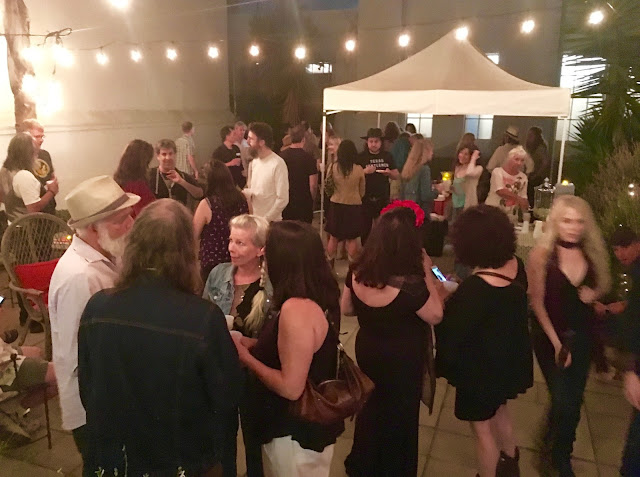 The show opened with a few great songs from Sam Morrow, clad in a Texas Gentlemen t-shirt. The guy has some pipes, and reminded me a bit of Sturgill Simpson, only with better enunciation. He sang about how "the same old bullshit doesn't make the grass green", and other truths. He sang a pretty one called "You Gave It All Away" that had us all nodding and tapping our toes along, including Spicer watching from the front row. "I have stuff for sale, if you like cd's ... or me," said Moore at the end of his set. We liked both. 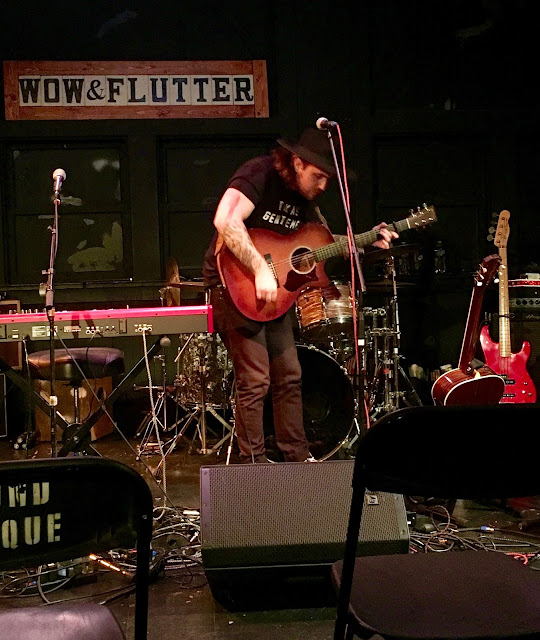 KP Hawthorn of the band Calico was up next, and was also excellent. She sang a funny song called "405" about being in love with someone on the west side ... when you live in the Valley. We get it. We also all had a group singalong for Hawthorn's cover of "California Dreaming" ... and it was as dreamy as you would imagine. It was really a lovely moment for a group of people to be singing about the place that we're all in, and know and love so well. It was special - even more so considering it seemed that everyone knew all the words! I'll be catching Calico at my earliest chance.

There was a break for some more fresh air and drinks, and then all reassembled in the theater to see the premiere of Spicer's brand new video for her song "Lightning". It was a gorgeous clip and song, and was all the more impressive to find out at its end that Spicer had shot almost the whole thing herself - underwater! This is truly a multi-talent. I was seated next to a woman who told me that she runs a poetry night, and often invites Spicer to play, as her lyrics are so poetic. That exchange caused me to sit up straight and really listen to all the words throughout the night, and I came away from it all even more a fan than I already have been for years. Amilia K Spicer is the real deal. 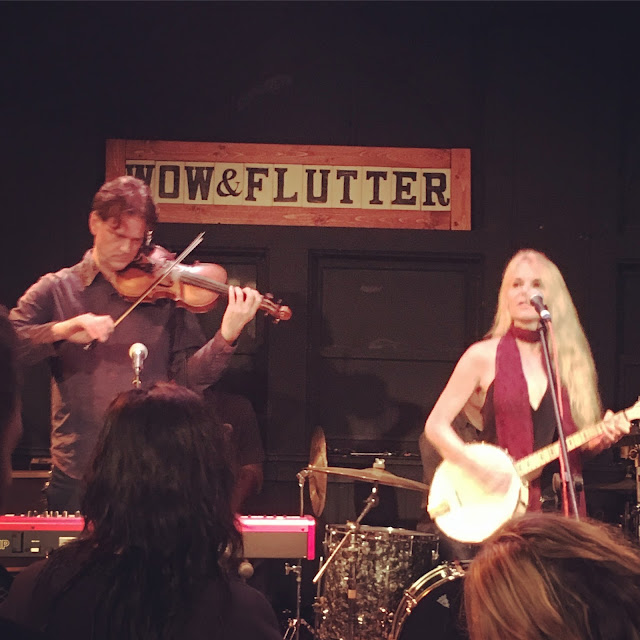 That was evident from the first notes she and her All Star band performed this night. I mean, Spicer started out on the banjo! Her musical companions for the night were all headliners in their own right, from Steve Postell to Michael Jerome to all the backup singers - all were of the highest caliber. Everyone knew it too, so the place was packed. SRO. People began to spar over their seats, and others offered to sit on the floor. It was a great turnout for a great performer, that's for sure. 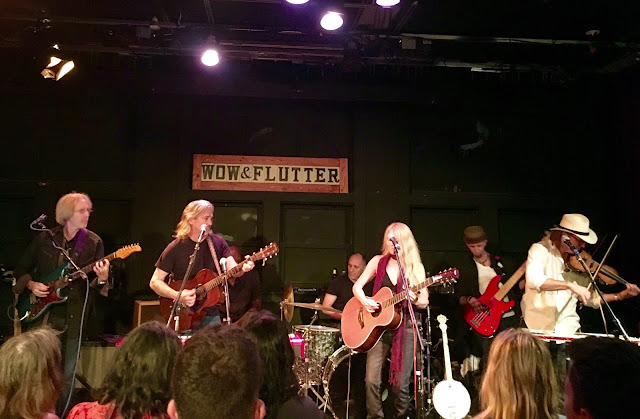 They began with "Fill Me Up" from Wow And Flutter, showing us from the start how good it was. It was, as expected, wonderful. It's all just so expert, with the smooth drumming from Jerome, the blistering solos from Postell, the mandolin player ruling, and the lush harmonies from all made you know that you were in some esteemed company. Spicer's sublime "Train Wreck" is so pretty you instantly knew why she has become such a darling of NPR radio in recent days. She's just something else. 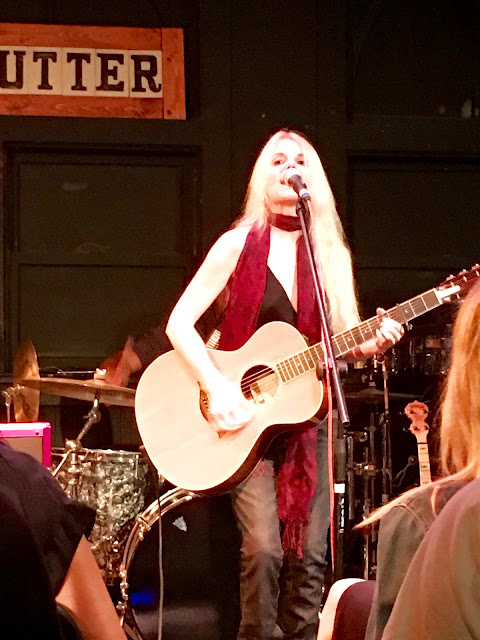 Christopher Allis joined everyone on stage for a gorgeous rendering of the big radio song, "This Town" and when Spicer sang the line about "My home is in this town ..." it made me choke up because I don't currently have a home in this town, and it's all pretty daunting with what's out there now. My home might NOT be in this town unless something cool happens pretty soon here ... And then I snapped back to the present and LOVED this song. Spicer's dad grew up in Harlan, Kentucky, so she had to do a song about it. She told us, "Whiskey runs through me like Mississippi mud, you can't water down my blood." To that, I raised my own glass.

One had to. Witnessing these musicians building it all to a crescendo together was powerful, and emotional. Like, thank GOODNESS we have music! What would we all do without it?! Especially incredible music like these guys brought. "What I'm Saying" was also just straight up great, and cemented the fact that everyone needs this new album, Wow and Flutter. It's just WOW. Extra well worth the long wait it took to get it just perfect - which it is. I'm not yet familiar enough with the songs to know all their titles, but when she sang, "In a little while, there will be beauty ..." I had to object, because there was plenty of beauty right then! It also consoled me a bit, that in a little while - things will be better. Thanks! 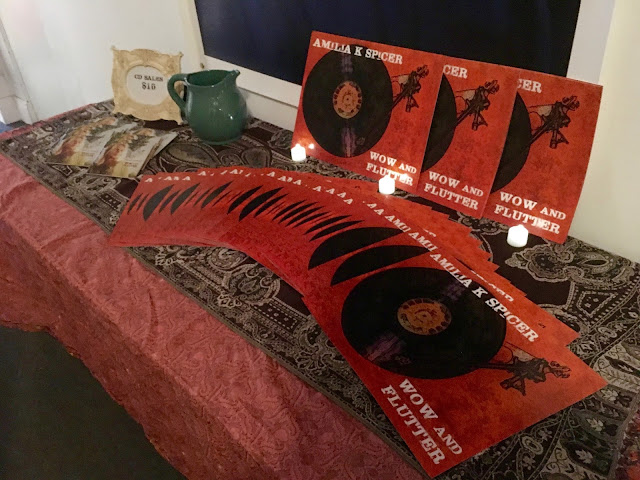 "My parents sent me flowers today." (Awww) "I freaking KNOW!" Spicer acknowledged all who had made this night possible, and noted her parents above all. After a little sorely needed pinot grigio for our girl, she got down to "Wild Horses", which was pure stunning, with its lap steel solo. "I'm a good man every other day ... I'm afraid I built this house on mud" I was all about the lyrics on this night, and I was not at all disappointed. So so so good. Then it was time for "The one that started it all", and they played "Windchill". It was so pretty, I got all teary again. I wasn't alone, as after another beautiful mandolin solo, the whole place burst into applause and shouts of "Bravo!" 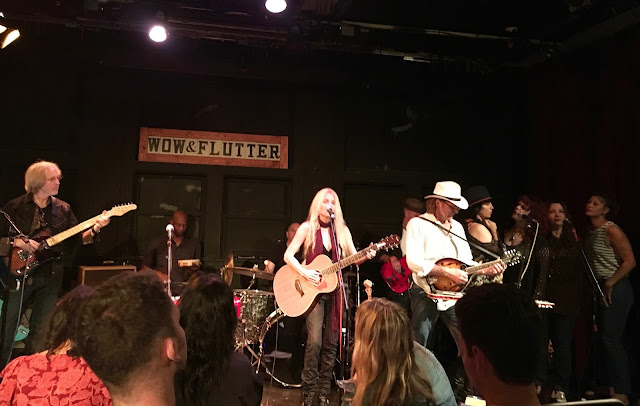 Spicer invited a "gaggle of girls" up for "Shotgun", and all those female harmonies were just the best. The best with more tears. I love this song. I love this lady. I love this music. I loved this night. Steve McCormick (who helped Spicer beautifully realize the new album as co-producer and co-musician) came back for a Dixieland inspired NOLA jam that was real fun, and then Spicer announced she had one more before it was time for her to party. She told about driving from L.A. to Texas once, and she was heading down the highway with a crazy storm on one side, and bright sunshine on the other. "Shine" was again so pretty I got emotional as it built to its climax. It's all just so well thought out and special ... I realize I'm gushing a bit, but it's how I feel, and I'm pretty sure there was a lot of gushing being done after - by everyone there. 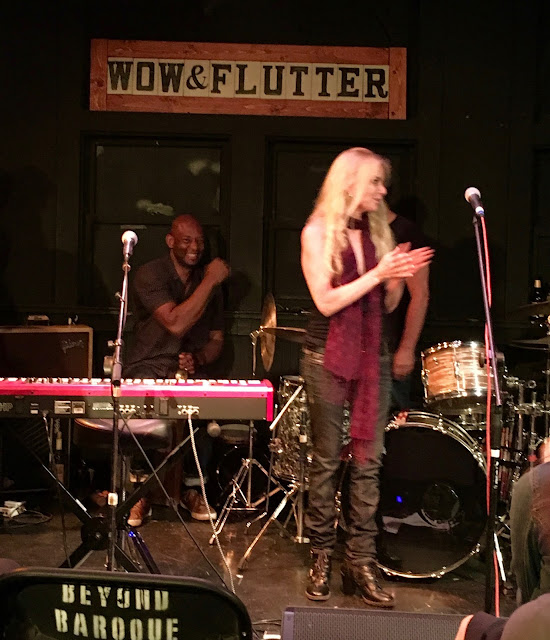 Sincere CONGRATULATIONS to Amilia K Spicer and all involved on what is a wonderful project that is now being launched out into the world for everyone to hear and enjoy like we did.

Enjoy Wow and Flutter now everywhere. Trust me, you will.