Surfside Venice had their grand opening jamboree last night, and it was a complete blast. Taking over the space left vacant by Danny's Deli, Surfside was an instant hit with locals and visitors alike. You could tell because it was jam packed inside with a ton of people I knew, and by the end of the night a line had formed outside of people I didn't. 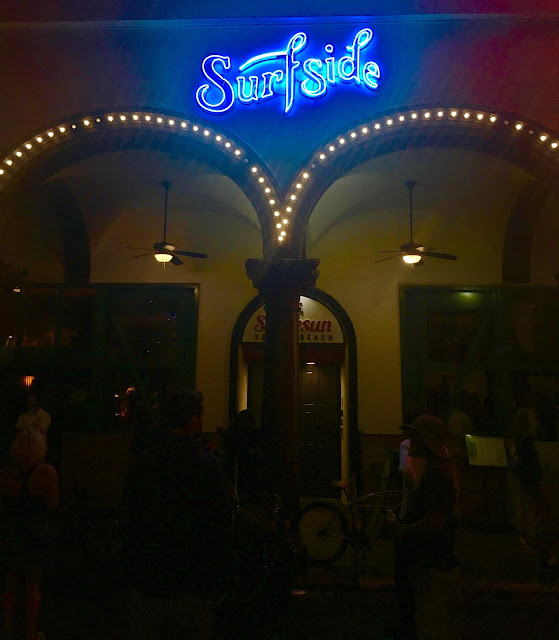 The evening began with a little ribbon cutting ceremony thing, complete with big, fake scissors and crepe paper red ribbon. As it was taking place in Venice, it did not take place on time. The new owners are the same folks that run the travel hostel upstairs, so this venue has been kept in the family. There was a big photo op of all of those involved, the ribbon was cut, and the fun moved inside. 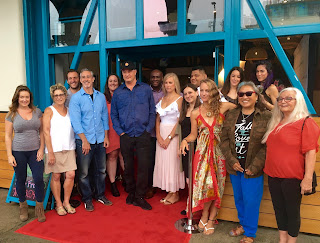 Venice Paparazzi was on the scene, and there was even a Surfside step and repeat for the occasion. Neighborhood favorites from the Danny's Deli days are back on the staff, like Dakota Rayfield, who painted the custom board proclaiming the Surfside love for Venice. 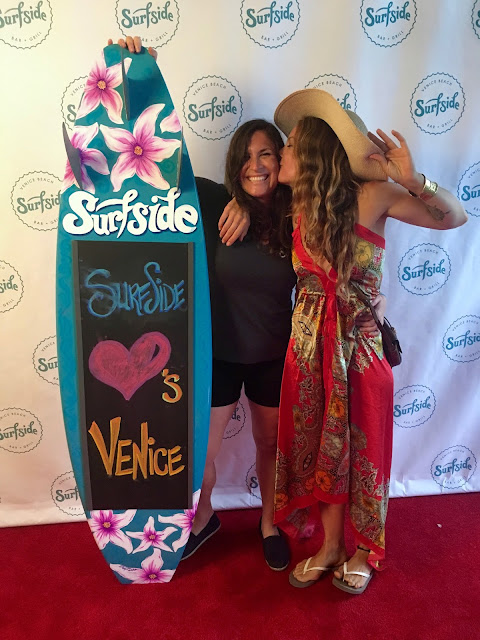 That love is apparent everywhere you look. The new rooms are bright and airy, with a turquoise and white beachy color scheme. The dining room is anchored by a big mural of a wave - perfect for the close proximity to the Venice Breakwater. 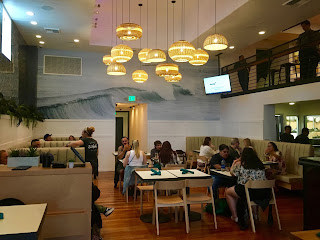 One pleasant surprise was how actually good the food was. Beach food is not famous for being that good, so the expectations were not that high. Well, exceeded! The menu has something for everyone, and while it might be a little steep price-wise, it's not that bad for a place that's right at the beach. I had fish and chips - delish. My friend had the seafood pasta - yuuuuum. My brother had a Mexican bowl with fish, and he rolled his eyes at its savoriness. Our neighboring table had just about everything it looked like, and all seemed extra satisfied. 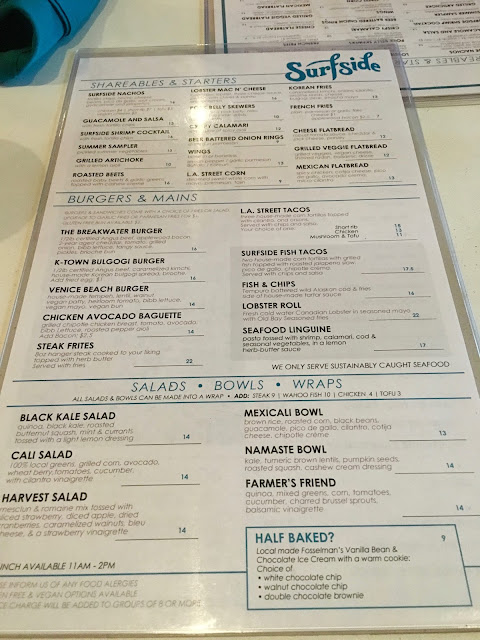 The drinks must also be mentioned, because they're delicious too. I had a "Pink Bikini", and it was even better when delivered by Christina Marquez (of Davy Jones' Liquor Locker fame). Friends everywhere we looked ... that's what you want in a new joint to hang out at. Solid. 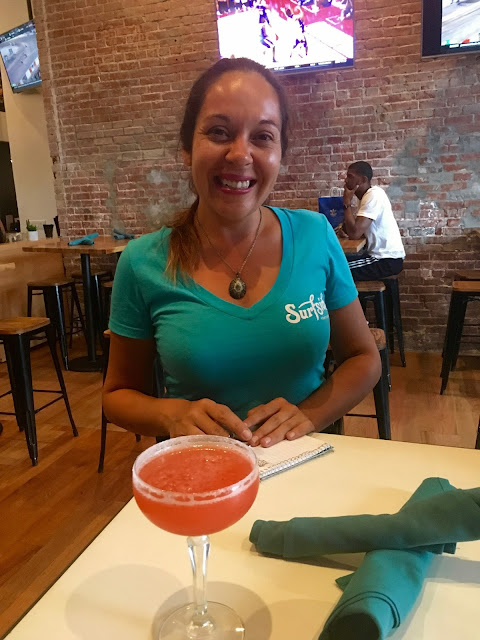 We kind of lucked out because as we were eating, the staff began clearing tables and setting up an actual stage right in front of us. The debut band for Surfside was none other than Peace Frog, the ultimate Doors cover band. The singer, Tony Fernandez, channels Jim Morrison (and my pal Shooter Jennings a bit too) so well that if you close your eyes, you've time traveled back to seeing Jim live - which nearly nobody has these days, so it's even cooler. 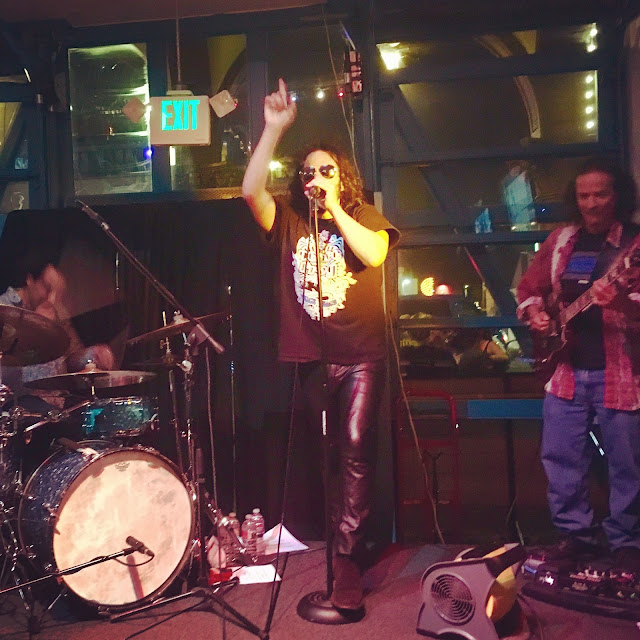 The room was dancing the entire time, with total enthusiasm. Loud group singalongs went down with every song, because pretty much everyone in Venice knows every word to every Doors tune. Or should. Another live music spot in Venice was sorely needed, and Surfside is delivering. If sports is more your game, you're covered there too, with large t.v.'s set up all around for whatever event you're into. It's gonna be a hang, trust me. 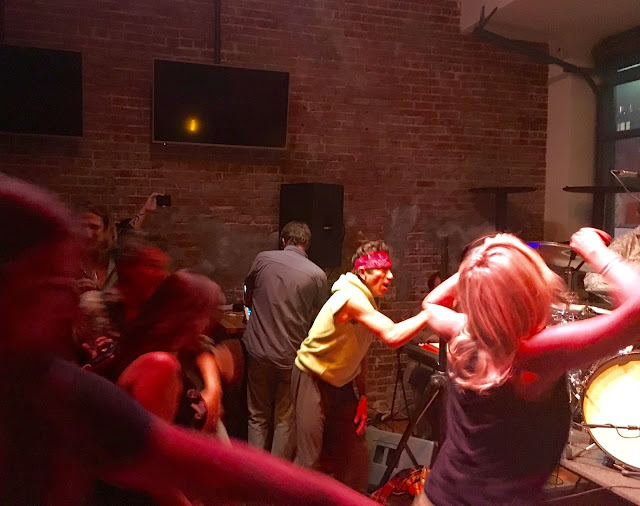 The dancing was not limited to inside. In fact, the best moves were going down outside on the sidewalk behind the stage, courtesy of Tonen and Company. It was rad, and so fun on a summer night in Venice. 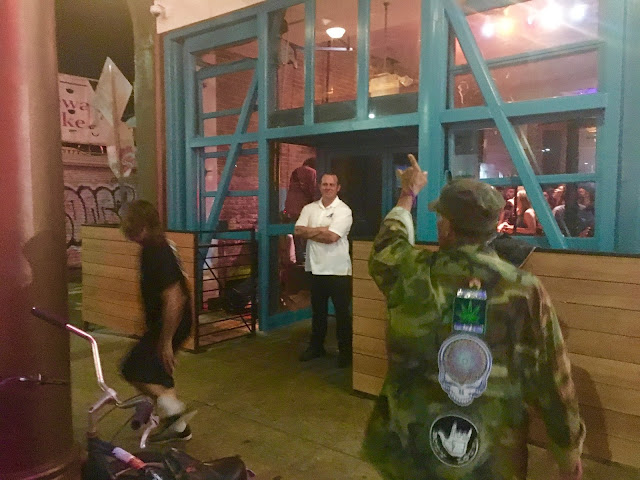 The line to get inside was long by the time we left, and I was happy for the Surfside folks for having such a great time on their opening night. I hope they will continue to honor the Locals vibe, not only by letting us cut the line (crucial!), but by making it clear that our Community is a priority. Venice needs that so badly right now. 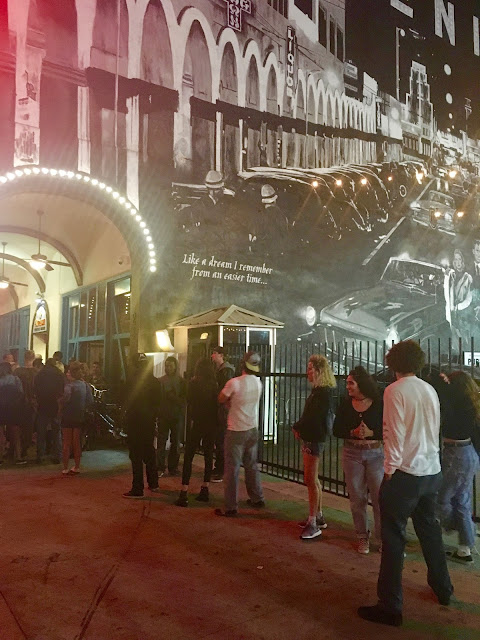 It was a super fun night, with a super fun crew, at a super great new spot for Venice. See you there!