With all the craziness in the world these days, the mellow vibes of Jack Johnson's music was exactly what was needed this past Sunday night. Johnson played a sold out show at the Hollywood Bowl, which was transformed into an intimate-feeling beach party for the evening. The weather was perfect, the majority of the crowd was clad in Aloha shirts or breezy dresses (and very white), and the stars twinkled above like they were put there just for this event. 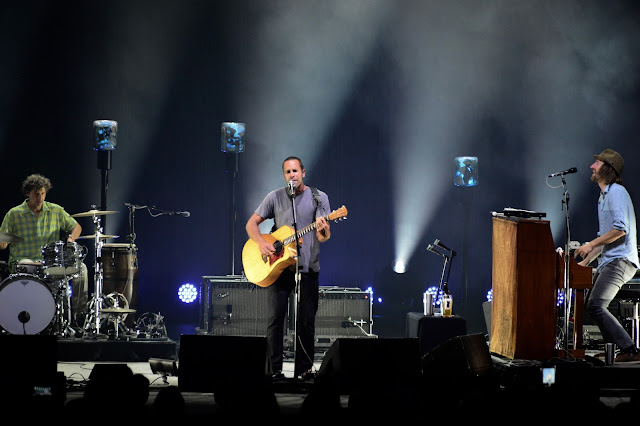 Jamtown set the tone early, playing their party-style tunes under a setting sun for an appreciative crowd of revelers. The collaboration between the individual talents of Cisco Adler, Donavon Frankenreiter, and G. Love is even better as a group, and all the partiers at the Bowl on this night were eating it up. With song titles like "Island Time", "Out To Sea", "Strawberry Moon", and "Jetstream," you gather that this is a band that digs their vacations, and they instantly made us all feel like we were on a good one of our own. After their last number, Adler shouted out, "You look ridiculous, you don't even understand it, this is beautiful!" - and I completely understood his enthusiasm. All was truly beautiful, and we were all in it together. Loving it.

The whole endeavor was sponsored by the "All At Once Foundation" in association with Johnson's Ohana Foundation. This meant that recycling was strongly encouraged (they gave out refillable glasses to drink from), plastic was strongly discouraged, there were bike valets, and best of all, the Bowl was strung with lights made from recycled materials just for this event that gave it all the feeling of a backyard jamboree. Of all the artists out there, it truly seems to me that Johnson is among the very most legit when it comes to walking his talk. Love the guy. 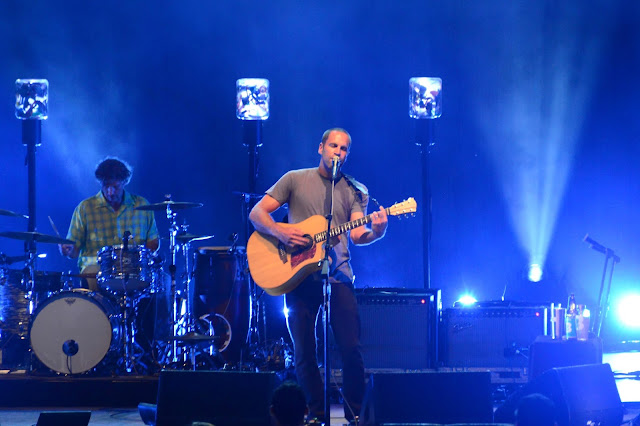 It's been a while since Johnson had played in L.A., so the crowd was all the more hyped to get down to his surfy, acoustic jams. He's such a casual character (remember the SNL skit where they had Jack Johnson shoes that were bare feet looking shoes?), that it almost took everyone by surprise when he ambled on to the stage, saying, "Hey, how's it going?" The ovation that met that simple greeting was massive, making clear the respect that Johnson has earned over the years. The band kicked it off with "Sitting, Waiting, Wishing", with the audience already clearly in the palm of his hand. I was sitting in a box with a new friend named Taylor, and when the band next began to play the song, "Taylor", she was beside herself with happiness. It was her college theme song. I get it. I was happy for her, and just looking at her beaming face reminded one of the absolute power of music to elate. Great. 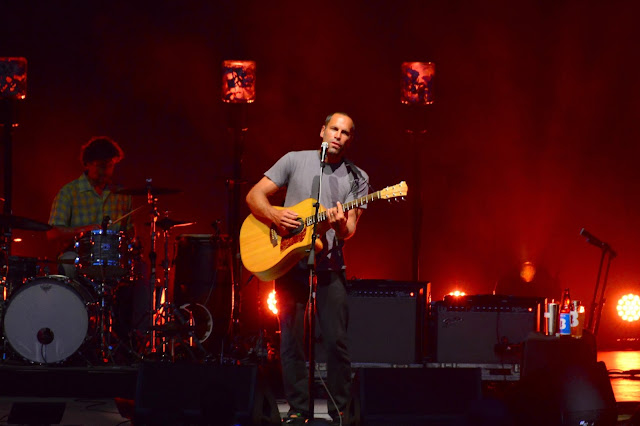 "Flake" brought me right back to 2001, when my brother brought home an advance copy of Brushfire Fairytales for me to check out. Johnson's debut album made a fan of me from the first listen, and for life. Every song was great, an instant classic, and when he played this one it was as fresh as if I'd just heard it. I heard someone say all of Johnson's songs sound the same, to which I'd reply, "Excellent!" It's a timeless vibe, Brah. Keyboardist Zach Gill was particularly fancy on this one, a real standout. It's fun because you can tell how much of a good time these guys all have playing together, and it's infectious. 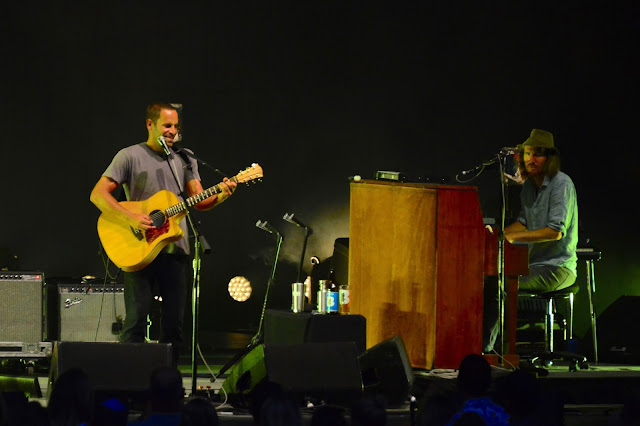 "A quick cheers to anyone who ever saw us play here at The Mint!" (WOOOO!) Johnson then shouted out to his drummer, our local Venice pal, Adam Topol, who has played with Johnson since the very beginning. He's a wonderful solo artist in his own right, and one of the few drummers out there who can distract me from the whole song because he's so good and fun to watch on his own. After introducing Topol, Johnson said, "My name is Jack, thank you, look at all you guys who came, I can't believe we get to do this!" Many artists feign humility, but Johnson is one of the very few with whom it rings true. You can feel his gratitude is absolutely sincere, especially with how much he really does give back. Like a Sublime cover of "Bad Fish/Boss DJ" for instance! The party was now even more on. 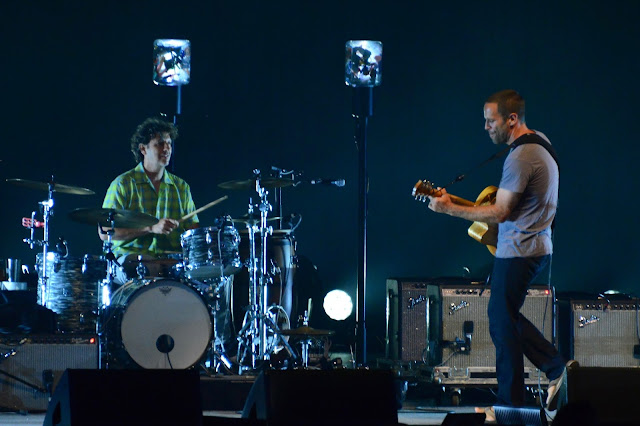 To introduce "Inaudible Melodies" (which I'm still humming today), Johnson told a story of how he originally wrote it in school at UCSB, to try and get an extension on a project. His film school professor, Edward Branigan, gave a lecture and Johnson tried to get all his notes into a song. Bruce Lee was so fast in Kung Fu films that the frames couldn't capture it, hence the line, "Frames can't catch you when you're moving like that ..." Rad. I love knowing stories behind songs.

"I don't really drink beer on stage, cause I'll burp when I sing, but this is the first L.A. show without our friend, Ben Bradley, backstage, so this song in particular is for Ben," said Johnson to introduce "Go On." Bradley passed away earlier this year, and was featured on the cups they gave away, which we heartily toasted to his friend's memory with. And the song was beautiful, of course. As was "Upside Down". 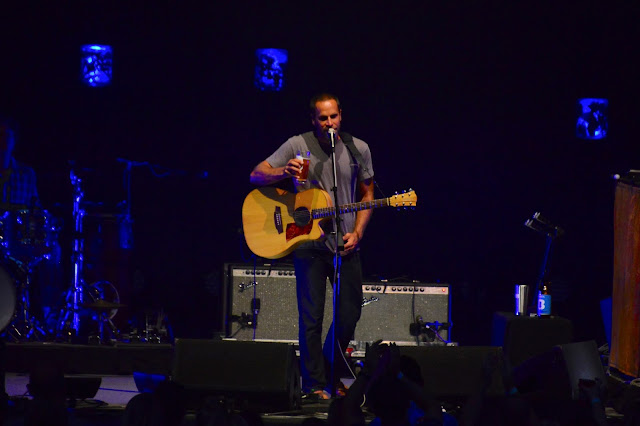 The brand new "My Mind Is For Sale" from Johnson's upcoming album, All The Light Above It Too, is a great example of how Johnson subtly (or not so subtly in this case, where he straight up takes Trump to task) works in his socially conscious messages, like a spoonful of sugar making the medicine go down with elegantly crafted, fun-sounding tunes that actually pack a wallop if you're really listening. "I don't care for your paranoid us against them fearful kind of walls ..." Right on. September seems a long way off when you want this album NOW.

"Tomorrow" started out with Johnson singing his old answering machine message his friends would hear when they called his house. He is clearly still crazy about his wife, Kim, and it was at this point that my box mate, Taylor, told me that Johnson is now her new standard for men. Like, if they don't step up and behave like Johnson does publicly to his his wife, then why even bother? I'm with her. Step it up, Men! Johnson is a fantastic example for you. Pay attention. Thanks. 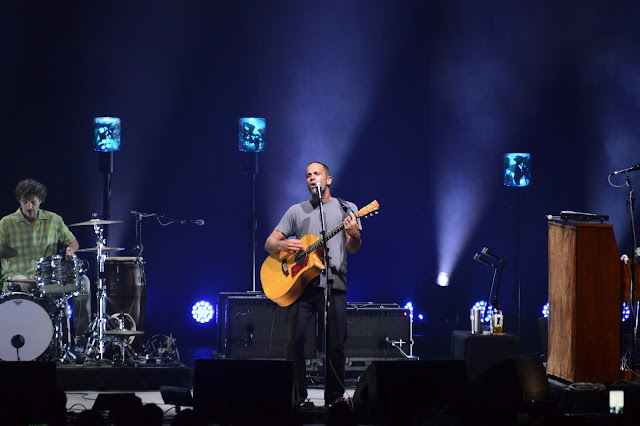 "Bubble Toes" got people dancing after Johnson said, "If you wanna dance, this is one of our few dancing songs, then it's back to boring again." Um, hardly, but we did dance. Then there was a smooth rendition of The Steve Miller Band's "Joker" that everyone sang along heartily with. "Wasting Time" and "I Got You" were great as ever, then it was my favorite, "Constellations". Johnson dedicated it to his Dad, who gave him this line and memory ... "To lay down underneath the stars, listen to Papa's translations of the stories across the sky, we drew our own constellations." So beautiful, you had to feel a bit emotional. I did for sure. (Shocker). 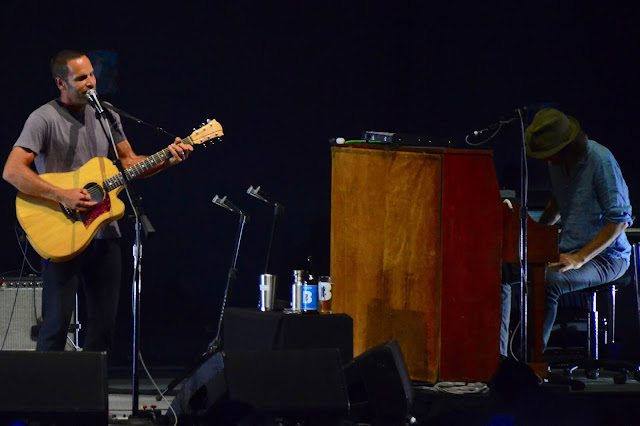 "Breakdown" was for Johnson's little daughter who was there, and I can only imagine was thrilled when he said, "I love you, little girl!" Cool Dad supreme. "Tape Deck" featured Stewart Cole on trumpet, who goes back with Johnson to his 16 year old punk rock band days, and he stuck around for "Banana Pancakes", giving it an extra flair. G. Love came back out for the one-two punch of "Rodeo Clowns" and "At Or With Me", creating a harmonica frenzy of awesomeness. The good time they have playing together is obvious, and their long friendship creates a cohesion that comes from decades of riffing, rocking, and ruling. 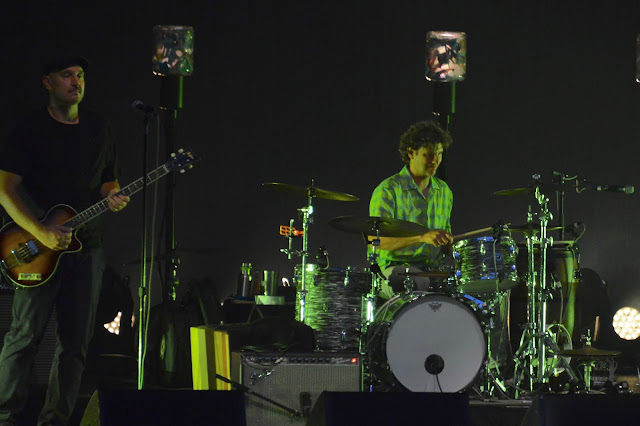 "Whole Wide World" was great, and "Good People" posed the very important and timely question, "Where'd all the good people go?" Seriously, where?! A good answer was that they were almost all at this show, having a ball. I was looking down, taking notes, and Taylor tapped me from behind, saying, "Just so you know, everyone is dancing!" I turned around to look and the whole entire Bowl, front to back, surely was up on their feet, dancing away. So festive, so happy, so needed. Thanks be! 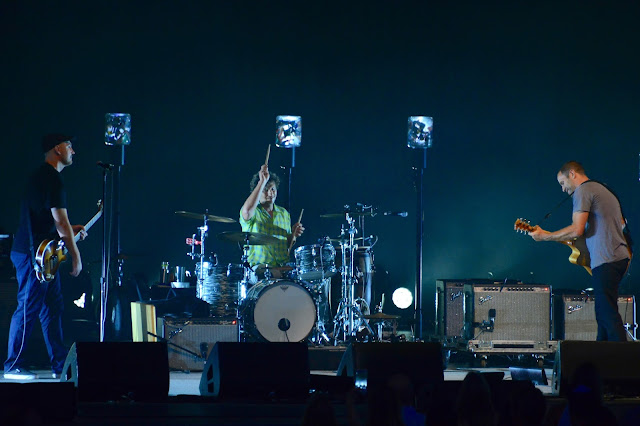 "Mud Football" was more fun - a story in song form, like most of Johnson's tunes. It was the last song of the regular set, and the applause was so thunderous then that Johnson didn't even leave the stage. He returned to the mic, saying, "I'm not gonna clown around like I'm not coming back out, there's a curfew." See - he's the real deal. 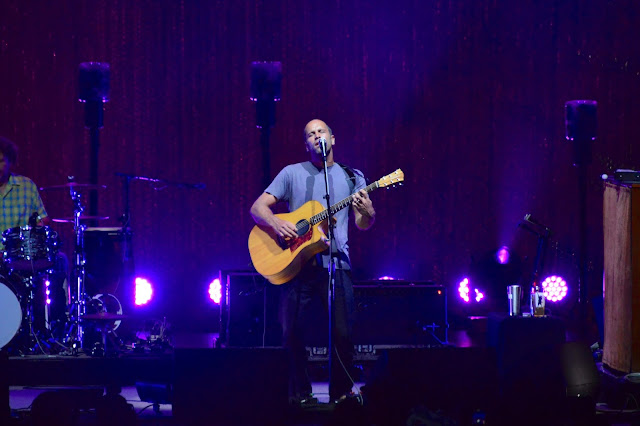 Johnson played solo acoustic for the encore, and dedicated "Angel" to his "lovely wife, Kim." We all cheered (and swooned) when he sang "Over 23 years have gone by, and I'm still yours." Again, the real deal. After that delight, he told a story about Willie Nelson getting him stones and taking all his money at poker, adding, "I'm dropping a name, but that's cool." It was. 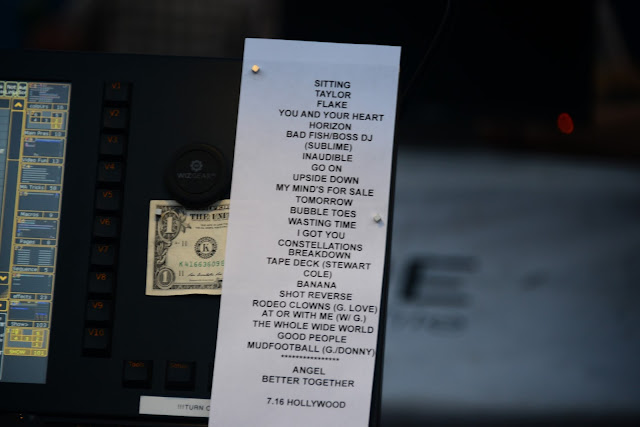 "Better Together" was the final song of the evening, and was again real swoon-worthy, Taylor and I agreed. "Love is the answer, at least for most of the questions in my heart" ... I mean. He's right. Love IS the answer, and when this many people come together and proclaim it to be so, singing together as one ... it's pretty hard to argue with. We are ALL better together ... we're all in this together ... and shows and humanity like this remind us of this in the best possible way. It was a magical night, in a magical place, with magical people all around, feeling the same way. And as the All At Once Foundation's mission statement goes, "An individual action, multiplied by millions, creates global change." That's pretty basic, but ultra true. The good vibes of the night carried over as everyone exited the Bowl, still on that natural high you get from good times that also do actual real good. 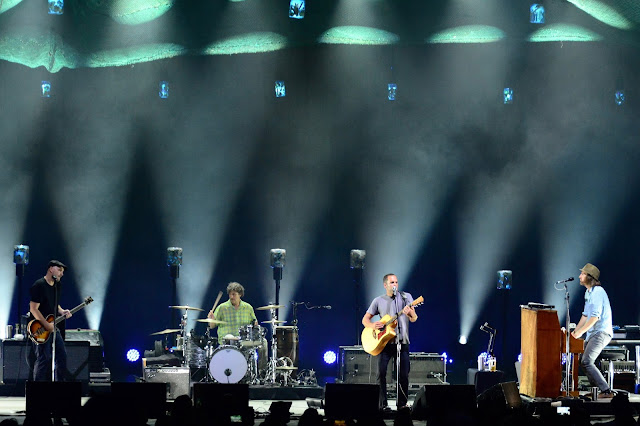 Thanks eternal to Jack Johnson for creating his musical, activist, positive world, and for allowing us to share it with him, through song and action. Right on.