This was an all-time classic Venice weekend, kicked off with the farewell to an absolute Venice treasure. It's true. Abbot's Habit is closing for good this Wednesday, June 28th. The corner of Abbot Kinney and California will never be the same ... and this is the one that hurts the most. By far. 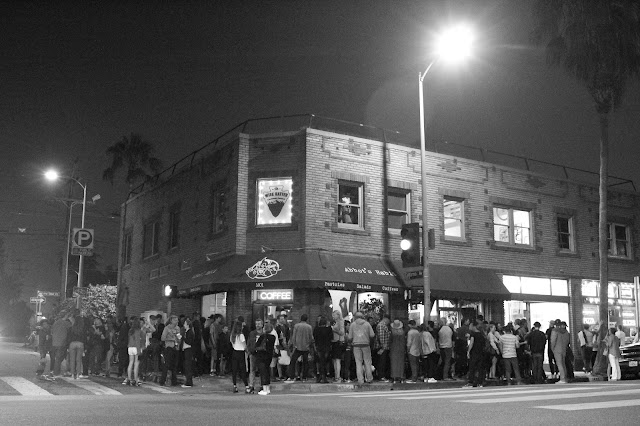 There are so many memories tied up within the walls of this legendary coffee shop you can almost see the ghosts of Venice past with your naked eye every time you enter. Last Friday night we gathered to have one last hurrah, with a musical celebration of both the people and the place that has been so special to so many. 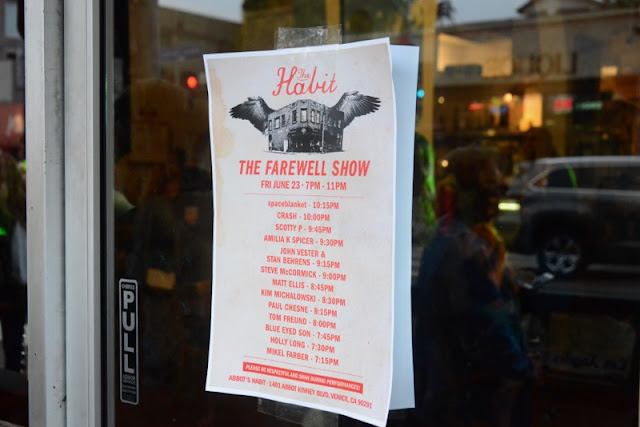 My brother, Paul Gronner, managed Abbot's Habit for years, and during his tenure there he and our friend, Scott Passaglia (Scotty P!) hosted a music night most Fridays (setting off what became the dread First Fridays that are now nothing like they were). Many of the musical artists from those storied days returned on Friday to serenade what seemed like ALL of Venice crammed into Abbot's for one last throw-down. Those who didn't fit (many) spilled out on to the sidewalks, in a visual display of just how much this place meant to us, and how very much it will be missed. 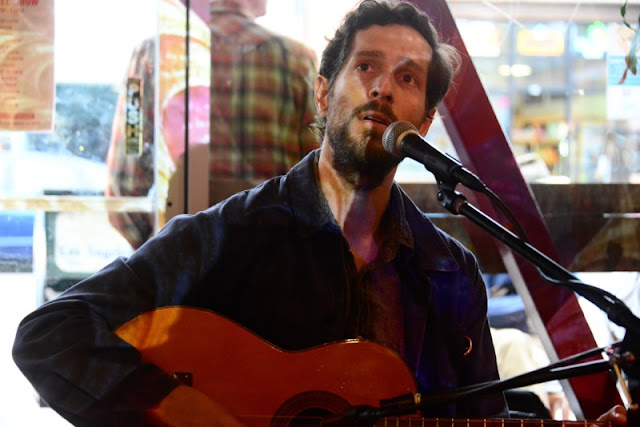 The evening started when it was still light out ... and so did the tears. Mikel Farber opened up the music, and got me choked up right off the bat by remembering the friends who would hang out outside every day ... Abbot's Habit was their spot. Dr. John ... Zeta ... they've passed away now, but their presence was tangibly felt through Farber's touchingly beautiful musical tribute. He sang, "He'd hang for hours because he knew it was where it was at." Abbot's Habit was always where it was at in Venice ... people left for years, and Abbot's would be their first stop back, because they knew they'd run into someone they knew and get caught up on all the latest in Venice. Now that is no more. Farber posed the question ... "What's next?!" Indeed, what? Where do we go from here, Venice? What are we going to do about it? 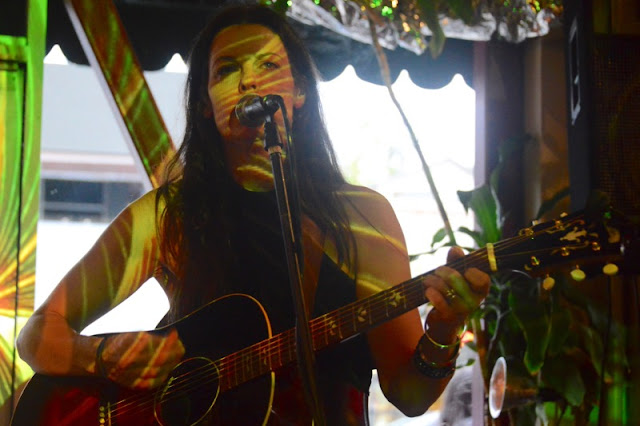 Hugs, laughter, stories, beers, joints, and love were all being shared along with the music, and Holly Long continued the Irish Wake of a night. A motorcycle roared by in the middle of one of her songs, and she said, "That's what I remember!" She was a young mother, and would come to Abbot's Habit to get out of the house, meet other people, and find her community. That story was told often. Once the kids grew a bit and Long wanted to explore her music more, Abbot's was the place that gave her that opportunity. It was obviously a very special place to her, as she choked up, saying, "I'm amazed I can sing!" Looking around, she noted her first guitar teacher was there among all the familiar faces, adding, "When you're up here, it's super trippy." It was very much old home night. 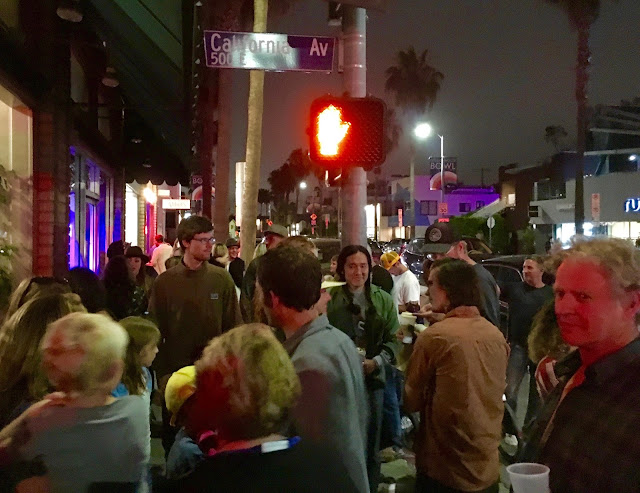 Tom Freund was next, giving us the appropriate "East Of Lincoln", singing, "When I moved east of Lincoln, I started drinking ... I feel my heart sinking..." echoing many thoughts in the room. Next up was "Truly Mellow" about "the smells of Venice", complete with toke breathing flourishes. The singalong at the end "La di dah!" belted out by absolutely everyone might have been my favorite part of the night, as it was the "Venice Choral Society" all singing together in solidarity for a time and place we knew was fleeting. It was emotional once again, for sure. Steve McCormick and Heather Donovan joined Freund for his "Collapsible Plans", and it was beautiful. Freund had his last Abbot's coffee and said, " I send my love to you all, may it grow in another place!" Yes, please. But where? 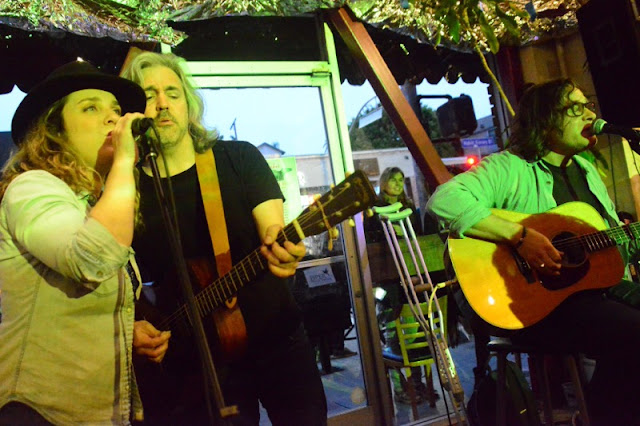 Paul Chesne and Dutch Suoninen were up next (there were many acts booked, so we had to keep it moving!), and gave it their Venice all. Chesne spoke about playing here with wine in his coffee cup (which many of us had in our hands that moment), and kicked off their set with the fun, "Pink Champagne", which the crowd (now equally as large outside as in) ate up. They gave us a brand new one called, "It's Called I'm In Love With You" that was swoon-worthy, and for "one more song at Abbot's Habit", they got down with "Get Myself Right". Chesne ended up with a "Who you gonna call?!" chant that had everyone yelling back "Ghostbusters" in the Snapchat dig of the night. Ugh. Looking around now, it was like the All Star Game of Venice musicians in there ... and their fans. It was like the coolest family reunion possible ... which it exactly was. 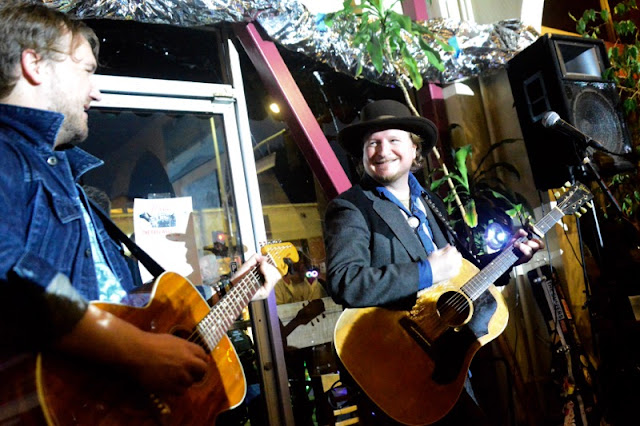 Kim Michaelowski played a gorgeous set, but I didn't hear the specifics because it was very hot inside, and like musical chairs in that some would go outside to give others a chance to hear inside. I was outside at this point to catch my breath, and Kim sounded so good that even more people wanted to cram inside. 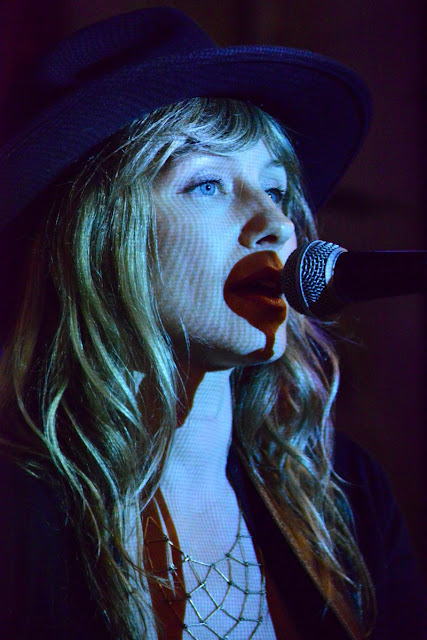 I returned just in time to see Kim taking the crowd's photo from the stage, and thanking Abbot's Habit, and its owner, Nina Santangelo, for everything over the years. 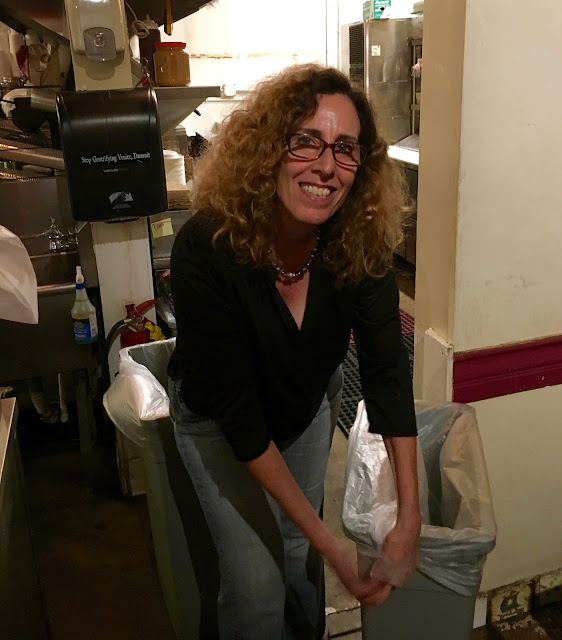 Nina was being thanked and hugged all night, and it was hard to hold back the tears when doing so. How do you even begin to sum it all up?! I mean, I remember when 9/11 happened and my brother was working early shift at the Habit, and some stoned guy called there to ask if what he was seeing was real. Paul called me and woke me up telling me to turn on the t.v. ... and I saw that horror show live. I found out Paul Wellstone died while getting coffee at the Habit. Love stories began here. I  know a dear couple who met and had their first date at the Habit. They just happened to be back in town this weekend, and went to have coffee at their old table, and renew their vows to each other there while they were at it. Their kids got to see where Mommy and Daddy met. We had so many art shows, naked poetry open mic nights, and the wonderful music nights we were honoring on this night. It's all just too much to even process yet ... 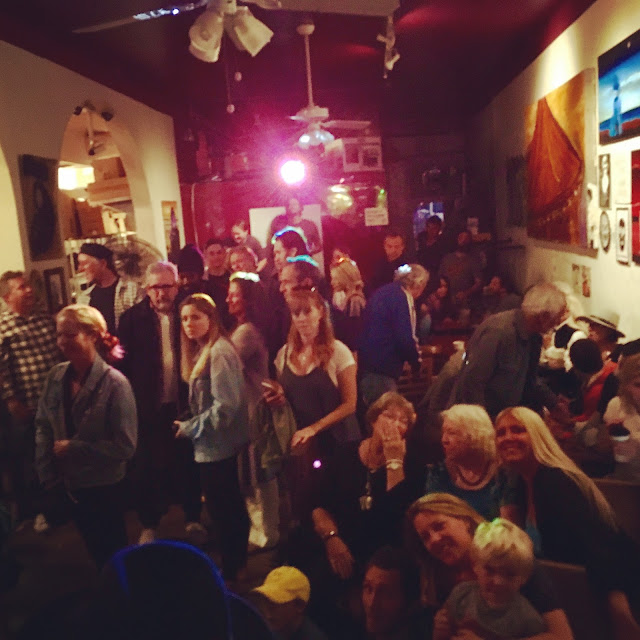 So let's keep talking about the music! Matt Ellis and Vavine Tahapehi took over the stage, and I again got teary, because we met these two now wonderful, lifelong friends, right there at the Habit music night. They were new to town from Australia, and instantly found their people there. As Vav said, "If we'd lived anywhere else in Los Angeles, we wouldn't be here anymore. Here's to you, Venice!" And they sang their lush and gorgeous "Seven Years At Sea", which is all about finding their way here. As we sat on the wooden pews, I heard someone behind me say, "It kind of IS our church." Exactly, and the solemn reverence Abbot's Habit was receiving on this night was both appropriate and well-deserved. "Heart Of Mine" was played first ever at the Habit music night, and Ellis' last Abbot's song - "Won't Let This Die" - was about the friendships forged within those walls, that will last "'Til the day we die!" Venice friends are forever. 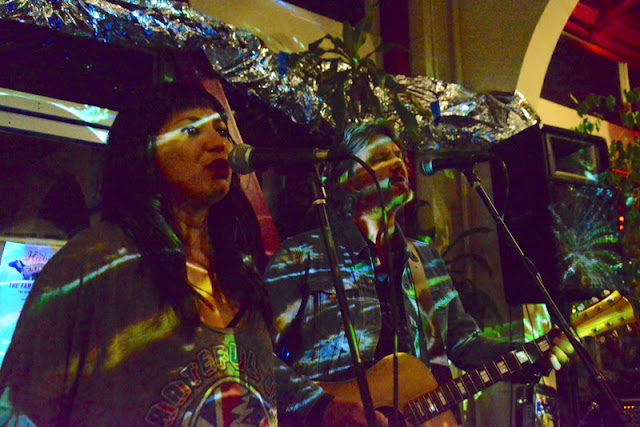 Steve McCormick and Stan Behrens played the blues that everyone was feeling, and "Lying On The Bottom Of The Mississippi River" is just about how we felt ... but in a good way. David Ralicke joined them to rule the trombone. It was Venice Greatest Hits in there, man, and it was good. I feel for Stan maybe the most ... he and his cronies have hung out on the sidewalk in front of Abbot's Habit ever since I've been here ... a good twenty plus years. Where will he go for his morning joe and shooting of the breeze? It's all just sad. Period. 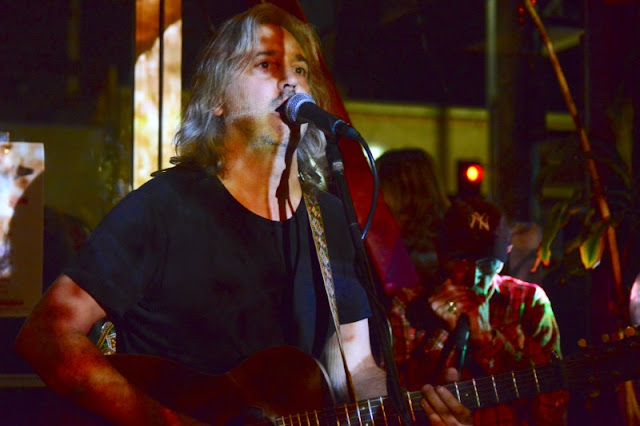 Stan stayed up there to accompany John Vester and Marky Lennon (of the band, Venice), and they played beautifully together, with Stan's artful harmonica weaving a spell around John's acoustic guitar and Lennon's harmonies. It was the world's greatest living room concert in a coffee shop. I miss it so much already just typing about it ... 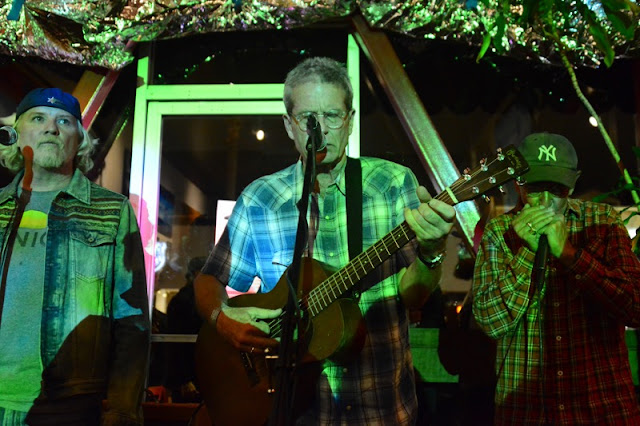 Amilia K Spicer is one of my very favorite songbirds, and we were privileged to get her back at Abbot's Habit one more time before it's gone. She had a mandolin player with her, and together they astounded everyone with the beauty of the harmonies. The reception to the music was so great that she urged, "Come on the road with me!" It was so, so beautiful, and you can hear more at Spicer's c.d. release show at Beyond Baroque on July 15th. SO good. Music Night co-founder, Scotty P. was next, with "She Has Magic In Her Heart", where she might have been Venice, and her heart might have been Abbot's. "This place is special. It's been a really great spot in Venice for everyone, and I'm gonna make up a song right now," said an inspired Scotty P. And did just that. While he was riffing on the spot, my friend Shane leaned over and asked me, "Can you imagine not coming here anymore?" All I could say was "No." I truly can't imagine it. 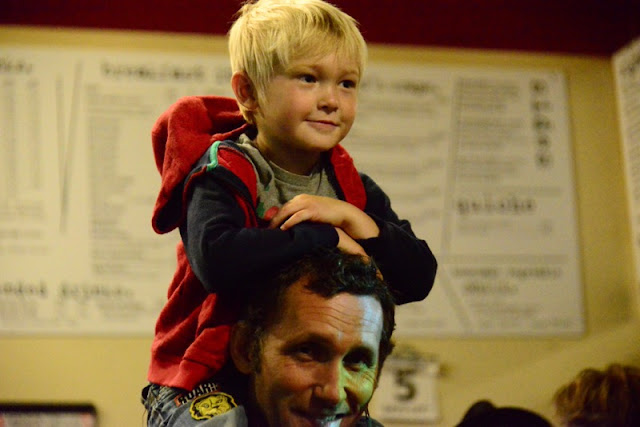 And we've only got until this Wednesday now - even though last Friday felt like the real goodbye. The final made-up lyrics from Scotty P's last Abbot's gig were, "Celebrate life, making memories that will last until the end of time ... remember the good times!" He's right. That's all we can do. And must do. 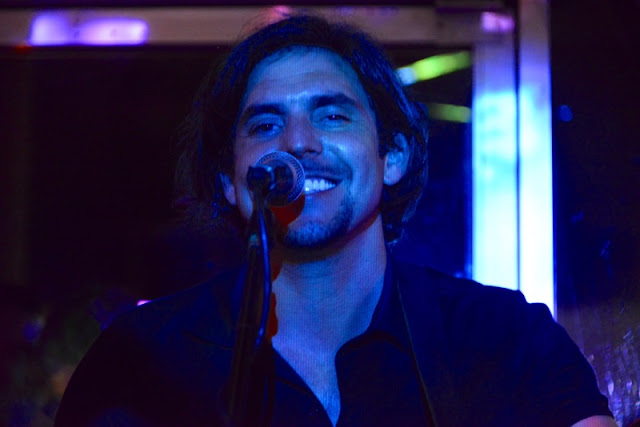 Crash was up next, and I must be forgiven because I was back outside trying to breathe again during his set, but my brother said the loungey vibe was great, and that Crash even sparked up a j while singing, in true Venice fashion. I'm sorry I missed being inside for it, but it sounded fun from outside - where it was also real fun. People were feeling it, and not wanting to let it go. 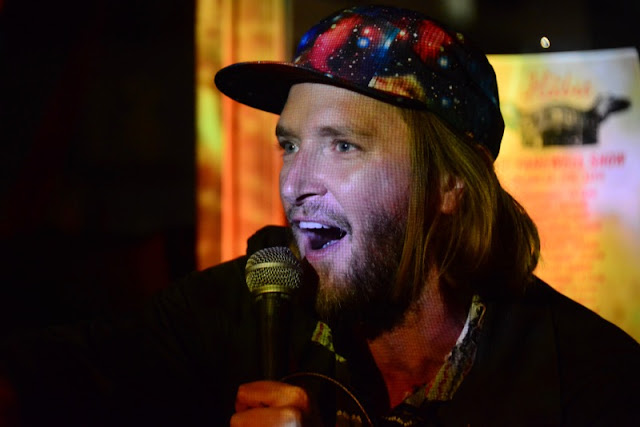 Scotty P. introduced my brother, and asked for a big salute to him for starting the music nights back in the day, and everyone hooted and hollered. "We've met some of our best friends here ... and now, Ladies and Gentlemen - spaceblanket!" A shiny silver spaceblanket back-drop was unfurled and Paul's shoegaze band mesmerized the room for the remainder of the night. There are no lyrics and no singing, which I think was apt for the occasion that there really were no words for. I looked around the room as they played, and saw so much love in the eyes that it really capped off the emotional night for me. After the last song, the mics had already been put away, so Paul just shouted "I love you! I love us all! We gotta stick together! Thank you, Nina! Thank you, Abbot's Habit!" 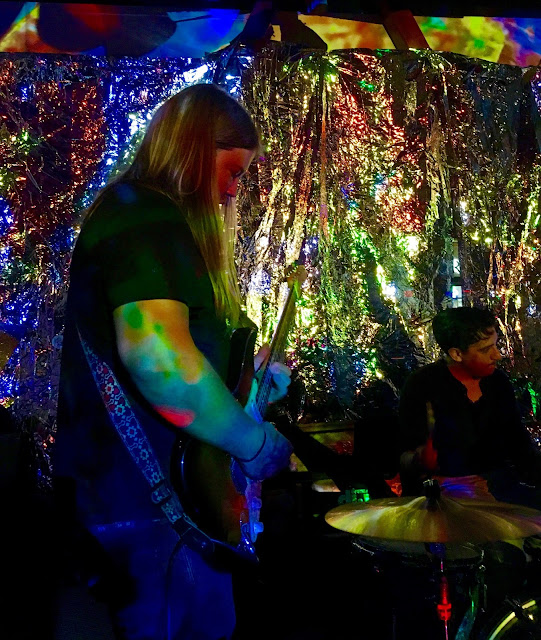 And that was that. The last music event ever at Abbot's Habit. The crowd didn't want the fun - or the camaraderie to end there, so everyone dispersed to after-party ... and another wonderful Venice night went down in history.