Ziggy Marley Live With Orchestra At The Hollywood Bowl - One Love!

One of my favorite nights in Los Angeles went down last night with the 16th annual Reggae Night from KCRW at The Hollywood Bowl. It was extra special this year, because the headliner this year was Ziggy Marley playing the songs of his father, Bob - on Father's Day, with the Hollywood Bowl Orchestra for the first time. Special, for sure. 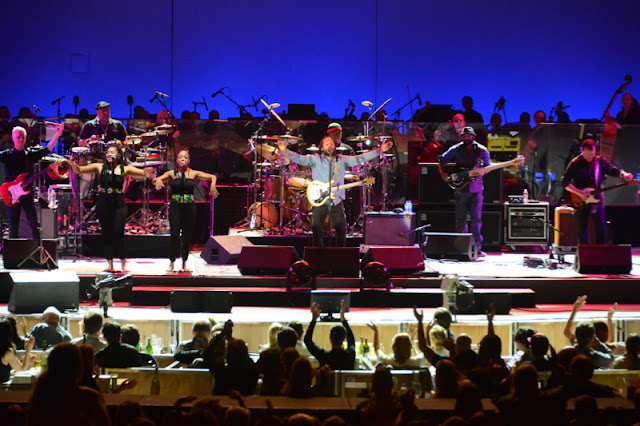 The good times were already rolling when we arrived at the Bowl, due to the ever-awful traffic that one must endure to reach this storied venue. Once there, however, the long lines were a distant memory as the whole place was raring to go to have as good a time as possible. Which we all most certainly did! 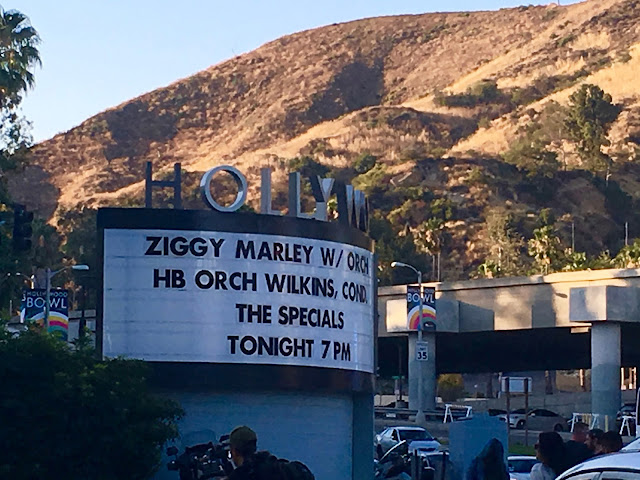 The show opened with a set from Keith & Tex that got the people dancing in their seats. It was still light out, and picnics were still the main focus, so these cats provided a welcome soundtrack to the al fresco dining. "Sweet Jamaica", indeed. I ran into a whole slew of people I knew, and many of them were mainly excited to see The Specials. The legendary U.K. punk/ska band had the folks up and at it from the first note. People were excited, and it showed. The dancing was non-stop, as was the wafting of weed from the last row to the stage. It felt like a giant, open-air club, of the best possible kind, with only the very best vibrations. Everyone looked to be in an awesome mood. At one point, Lynval Golding shouted out, "Are there any father's here?!" A huge roar indicated yes. "Well, Father's Day has been cancelled, it's Mother's Day every day!" Right on. 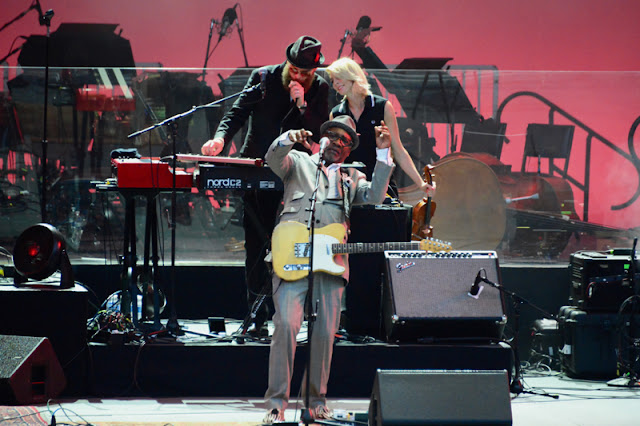 The Specials got quite a long set, and it kept building until it reached the superhits, and the superfans were overjoyed. "A Message To You" was ever-classic, as was the ultra-upbeat, "Monkey Man." By the time Lynval Golding, Horace Panter, Terry Hall, and their excellent backing band reached the final number, "Enjoy Yourself" - well, that's exactly what everyone there was doing. Beyond enjoying themselves, really ... it was just an absolutely perfect night. That was about to get even better. 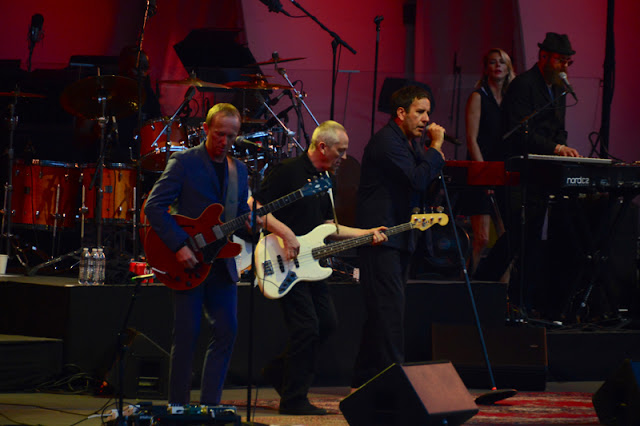 I LOVE Reggae, and it doesn't get any better or more legit than when played by a Marley. Tonight was Bob's eldest son Ziggy's turn to shine in the spotlight, and the fact that it was Father's Day made it feel even more poignant when Ziggy played his father's songs. Marley was introduced by KCRW host, Aaron Byrd, who said that it felt more like April 20th than June 18th in there, and acknowledged single mothers (like his and mine) who pulled double duty ... "Happy Father's Day, Mom!" We toasted our own mother right then and there. Byrd added that there were three things that brought Los Angeles together ... "The Lakers, The Dodgers, and Reggae Night!" That certainly felt true last night, and when Marley and his band took the stage, as it felt like instant global unity the moment they began to play. 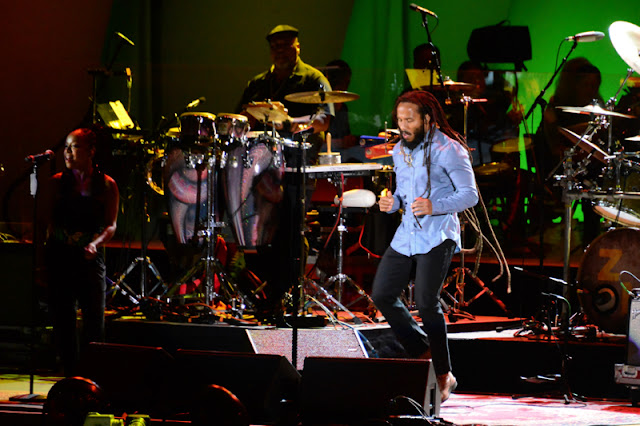 They opened with "Revolution", which was very well received by this most-likely lefty crowd that would be more than fine with a revolution here in the U.S.A. right about now. Timely stuff. "True To Myself" is some great advice disguised in a peppy song, with the line "I can't make you happy unless I am", particularly resonating. "Wild and Free" was an homage to all the marijuana blowing in the breeze, and the miracle that the plant itself truly is. Watching Marley, you can tell he means every word he sings, and performs with everything he's got. His denim shirt was soon soaked through with sweat, from his non-stop dancing and entertaining, with long dreads flying. He's great. 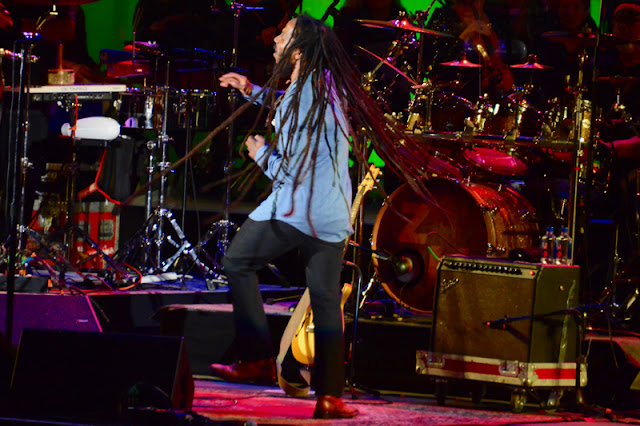 1988's "Tomorrow People" is the one that put Ziggy on the reggae map for me, and he has only made his own name as prominent as his father's ever since. After that one, Marley introduced the Hollywood Bowl Orchestra, who took the stage with their conductor this evening, Thomas Wilkins. I got immediate chills as the majestic horn section chimed in on "Beach In Hawai'i". Orchestras always make everything sound even better - and more emotional. Like on "Love Is My Religion", which is very much true for me, and always brings up a lump in my throat as we used that song for a friend's funeral years ago (RIP Sponto!), and it still always gets me. 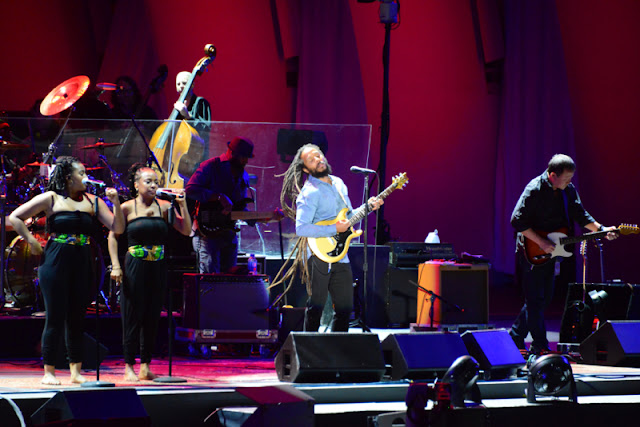 The whole place was got when "Is This Love?" started up, and the lights on the Bowl turned to the rasta colors of red, green and yellow. People love themselves their Bob Marley songs, and Ziggy is the closest thing we've got now to the real thing. He didn't speak much between songs, but at one point shouted, "It's so good to see people gathered in unity! Oneness!" That's what it feels like at each year's Reggae Night, total unity and One Love ... and that's why I've never missed one. My soul needs this feeling annually. Thank you! (It should also be mentioned that pretty much all I want is to be a Marley backup dancer or flag waver. I'm available!). 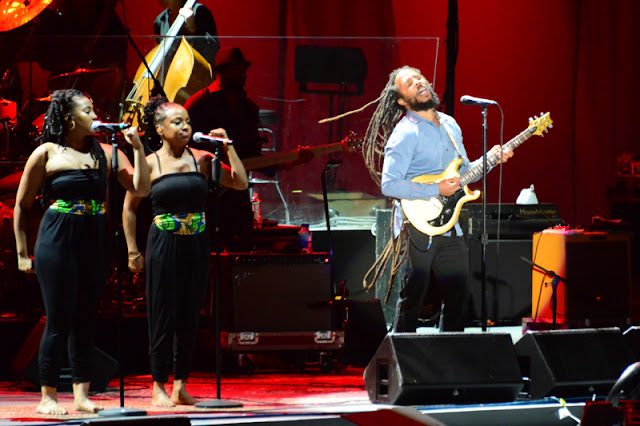 "We Are The People" carried on that theme, and it urges all not to "let them divide us" as we are "People, not corporations" (exactly what we say in Venice these days). "Get Up, Stand Up" - I did, I do. Last night, we all did in there, as this one caused the Bowl audience to leap to their feet, front to back. "Don't give up the fight" ... there's no way we can. Not when things keep happening, like Philando Castile's murderer being acquitted of that crime. NEVER give up the fight. 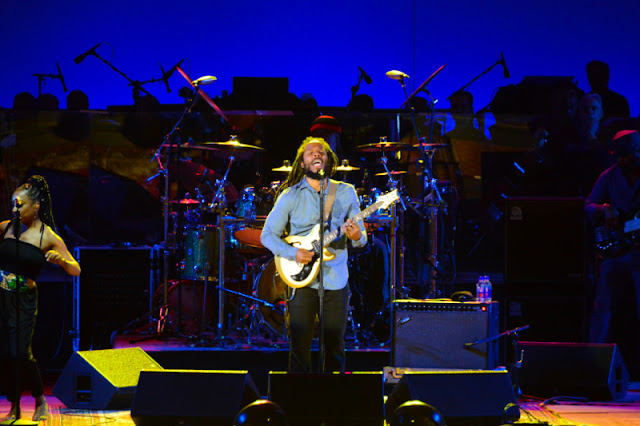 "One Love" summed up the whole event, as we all sang along to that reggae-defining song that really is the answer to world peace. Just love everyone ... we're all in this together. Why is that so hard for people to remember in regular life outside of Reggae Night? Thank Jah for this reminder of a tune. 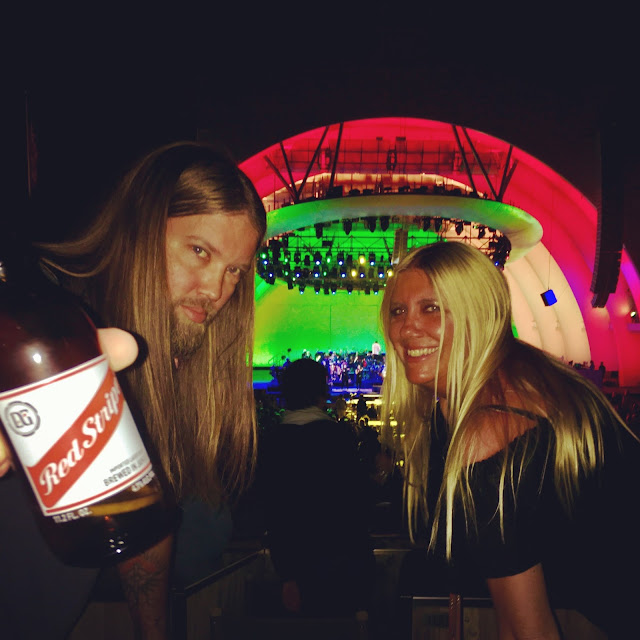 Looking around, everyone was so happy, up and dancing and singing (and smoking and drinking and hugging and laughing), that all one could really feel was truly One Love. My heart was full. 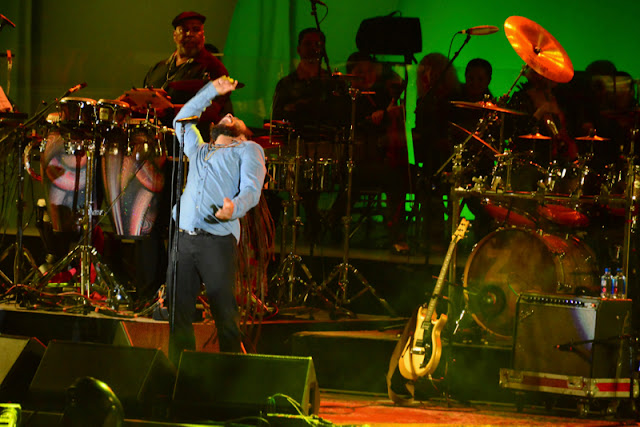 "Exodus" was the last song, and proved to be our outro as well, as there was no encore to Marley's surprisingly short set. I haven't mentioned much more about the Hollywood Bowl Orchestra since their first song, because, frankly, it was very hard to hear them. The reggae beats pretty much drowned them out, but it was still nice to know they were there. Or it all blended so seamlessly that you couldn't discern between it, but I think it was the reggae guitar domination. Before our mass exodus, Marley brought out his own kids, who shouted, "YEEEEEAAHHH!" in their Father's Day appearance on this grand stage. With that, the Marleys were off to have their own celebration, and we all filed out, still humming along, with springs in our steps. Happy. Full of One Love. Reggae Night is the very best. All thanks and praise to KCRW, The Hollywood Bowl, the wonderful bands, and the people that provide all the unity and fun each year for one of my very favorite nights of the year. JAH! Rastafari.