A Proud Weekend In Venice

Well,  that was fun! Venice Pride took over Venice for the weekend, and it was a celebration of diversity and inclusivity for the entire town. Venice has always been a place to be yourself, no matter what, and this past weekend brought that fact into sharp focus with a street party for the ages.

After a ceremony on Thursday (that I missed) to dedicate the rainbow lifeguard tower at Brooks Avenue and that stretch of sand to be officially known as Bill Rosendahl Beach, the real party went down on Friday night with an epic dance party in the street at Windward Avenue in front of the Venice sign. 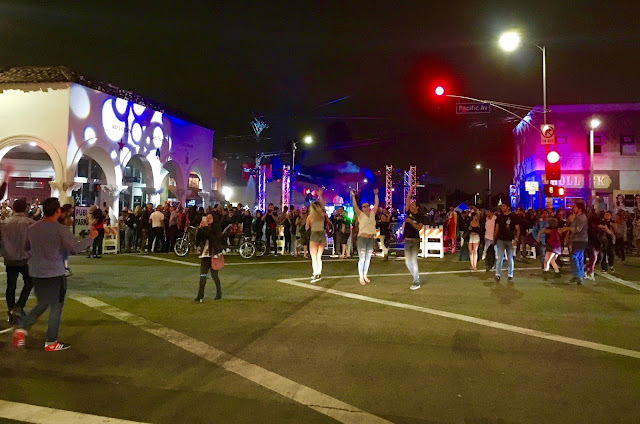 Venetians of every make and model turned out to support their LBGTQ brothers and sisters (if they didn't identify as that themselves), and those brothers and sisters got DOWN. DJ Victor Rodriguez got the whole thing started at about 5 pm, and kept the party going in the streets until 11pm, when people dispersed to the many after-parties. 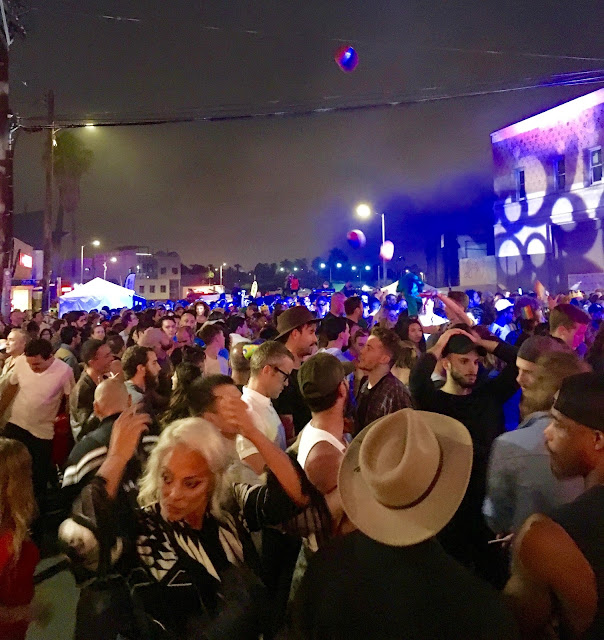 The crowd was huge, and beach balls were batted around overhead, in true beach party fashion. Each speaker's comments about the wonderful people and town of Venice were met with massive roars and applause, and you could tell that absolutely everyone was in the mood to blow off some of the steam this crazy world of ours has built up over recent weeks/months. That steam would have blown the roof off of the place, had their been one, but we were partying under the stars, and under the rainbow lights of our Venice sign. 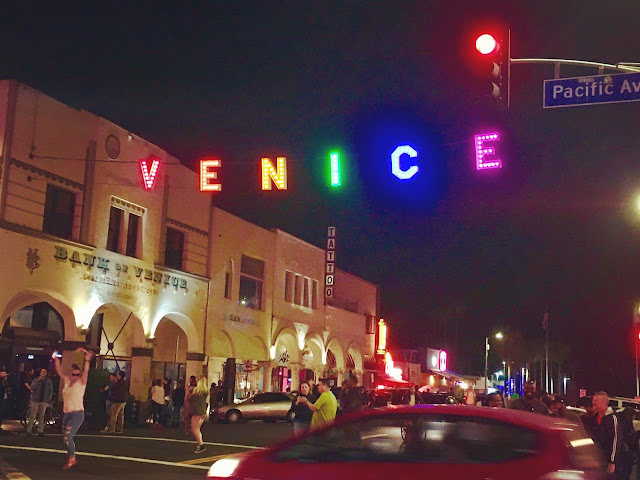 The whole proceeding was family friendly, and many youngsters were spotted in the crowd, creating wonderful memories and building support for EVERYONE from a young age. I was so encouraged to watch my little friends loudly cheering and pumping their fists for every declaration of unity and love for all ... it gave me real hope for the future, watching them with their rainbow-sprayed heads of support. It was truly a night of One Love, and beautiful to behold. 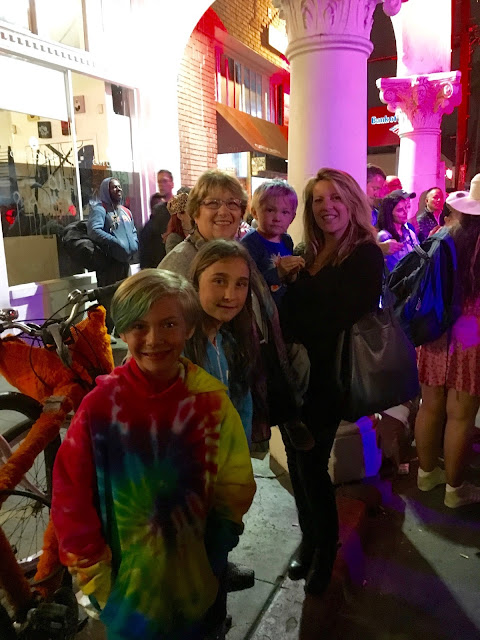 Mike Bonin spoke, of course, as did Pride spear-headers Grant Turck and Danny Samakow. The celebrity sign lighter was Venice fixture, Lori Petty (star of Point Break, Tank Girl, and Orange Is The New Black), who spoke about how she came to Venice from Hollywood, saw naked, wet Red Hot Chili Peppers here, and decided never to leave. She talked about how everyone here is beautiful, and diverse, and how we stick up for what's right. How it's special here, and no greedy landlords or corporations can change that, no matter how hard they're trying. And you could feel exactly that. 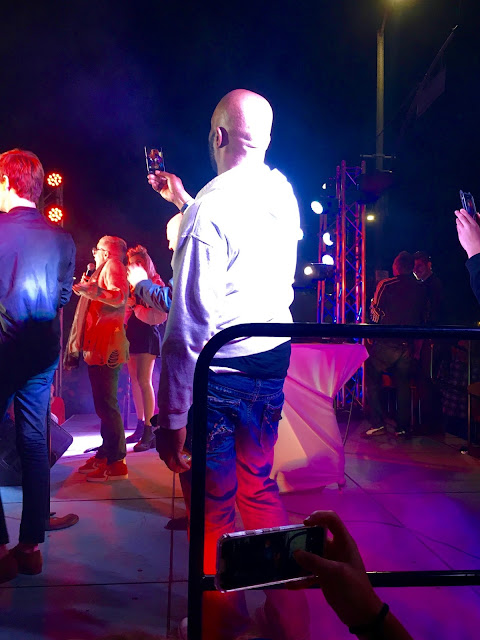 All gathered yelled their agreement, and all the camera phones went up to count down from 10 to light the sign. When the rainbow bulbs lit the sky, the crowd went wild. Photos were taken, dancing re-commenced in the streets, and all was well in Venice, California. First Fridays was happening over on Abbot Kinney, but that's for tourists. If you wanted to see and know the real Venice, we were all on Windward Friday night. 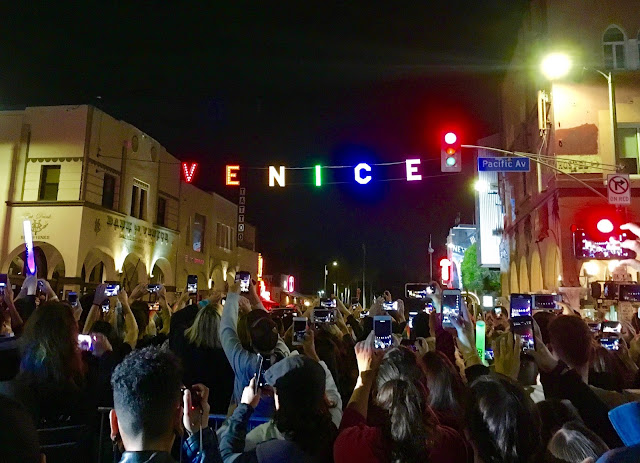 The street party was so fun, and every time the streetlights changed, it was another dance-a-thon right there in the diagonal crosswalk under the Venice sign. Strangers danced together, high-fived, hugged, and generally thanked our lucky stars that we're living in a place that not only accepts all, but rejoices in our differences. It was truly an awesome sight to see. 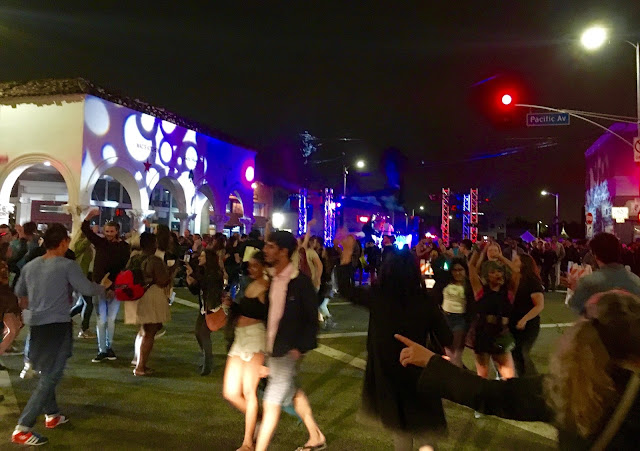 After a while, people took off to all the various after-parties (I'm told the official one - "Gaywatch" at The Birdcage on Main Street was beyond packed, and went OFF). We just carried on dancing around in Venice, feeling happy that our gay friends once again had a place to celebrate on the Westside. 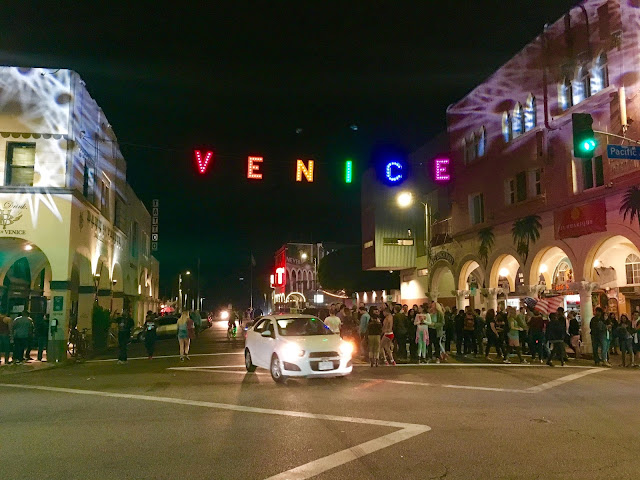 The weekend was super June gloomy, but that didn't dampen any spirits. There was a beach clean-up ("Beach Please") on Saturday morning, and then an all day party at Muscle Beach ("Status Is Sexy") with performances by singers and dancers, speakers, and all the Boardwalk tourists getting a taste of how we support each other down here by the sea. 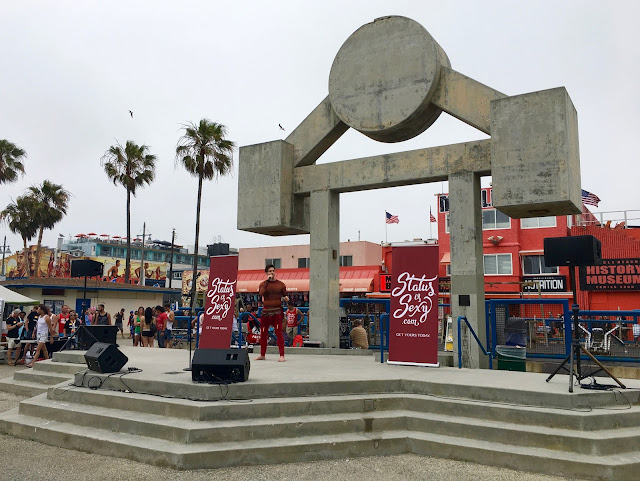 Pride shirts were for sale, with proceeds going back to the Venice Pride organization to do it all again next year, even bigger and better. I want to shout out to the L.A. Rams and the L.A. Chargers for both so publicly supporting Venice Pride by buying up many of the light bulbs for the sign, and taking out ads voicing their support. For such a typically homophobic organization such as the NFL to come out in support of celebrating the wonderful diversity of Venice indicates a real sea change, and true progress for ALL. Super cool. *I do not want to shout-out Snapchat, who did not chip in, even though they could really use the good p.r. Just beat it already ... you're not wanted here. Thanks. 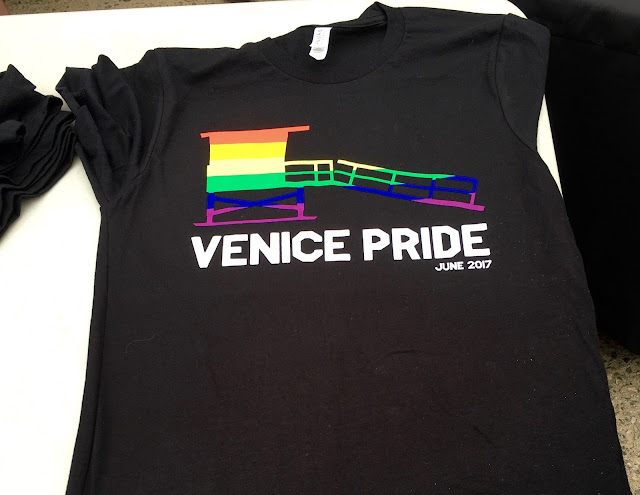 Sunday was pretty much a day of rest, as it felt much quieter everywhere. We basically kicked it with George at The Townhouse, having bloody marys inside to wait out the gloom and discuss how much fun everyone had had the nights before. An enormous THANK YOU to everyone who participated in this very prideful weekend in Venice, from the organizers to the partiers! The world is always watching, and we showed them that Venice continues to be a place of wonder and acceptance and a real good time. Pride is a great word for it, as I'm super proud of Venice when it comes together to support everyone like this. 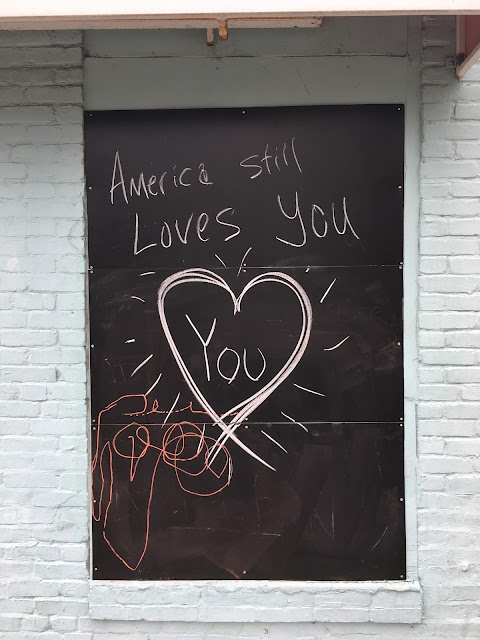 Keep up the good work, everybody! xoxo