An Punk Rock Art And Music Weekend In Venice

With heavy things continuing to go down practically every day in the world, last weekend made clear that people were again in the mood to blow off some steam. 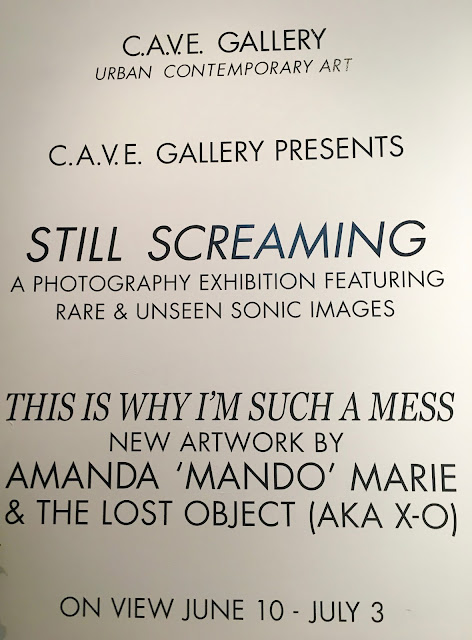 The weekend was also book-ended by tacos. After some Friday night hijinks, we finally got to try the excellent tacos at El Primo tacos, the little taco set up on Lincoln Boulevard by the old aquarium building. There was still a line after 11 p.m., and once we had a bite, we knew why. YUM. Get yourself there for some street tacos ... you will be happy. 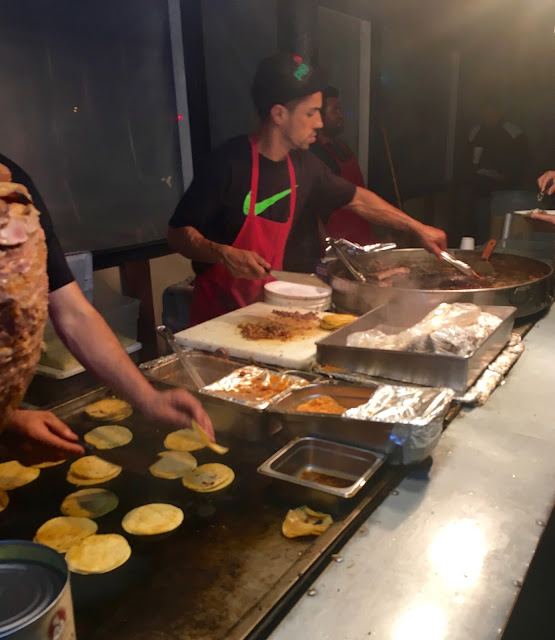 Saturday was all about art. I picked up my pals at In Heroes We Trust, and we made our way over to San Juan and Main, where they were having a party with a virtual reality situation, set up to show new ways of advertising. 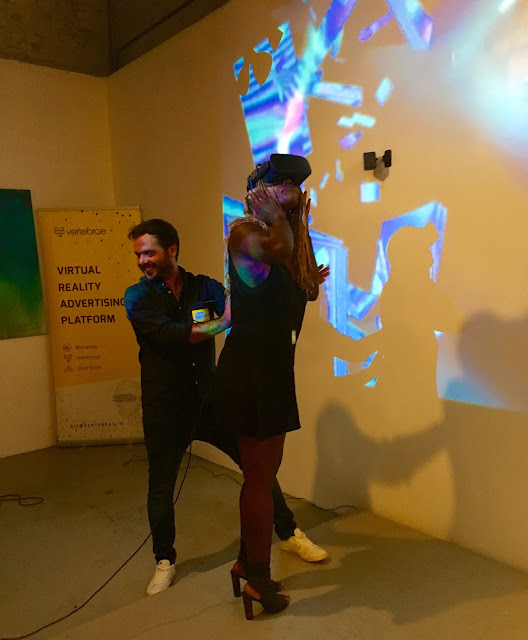 There was quite a line for the v.r. thing, so after admiring Matthew Heller's new First Amendment mural on the wall outside, we made our way over to the C.A.V. E. Gallery for the opening of the Still Screaming punk rock photography show. 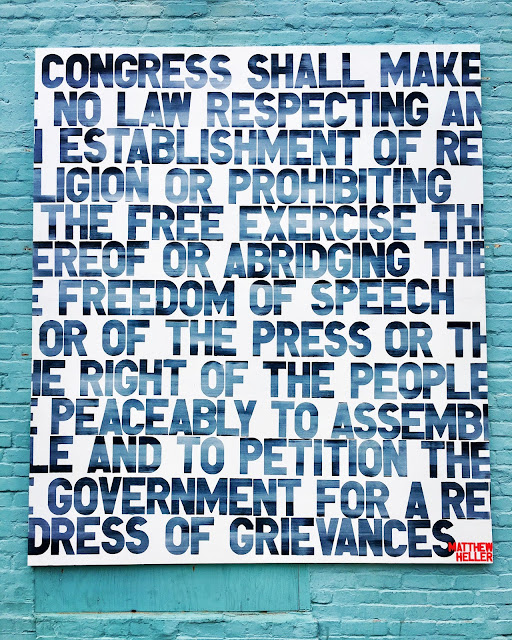 The walls were covered with shots that do a great job at summing up that time period that was ruled by punk rock. My favorites were by our local photographer, Josh "Bagel" Klassman, whose black and whites greeted the opening goers right inside the door. 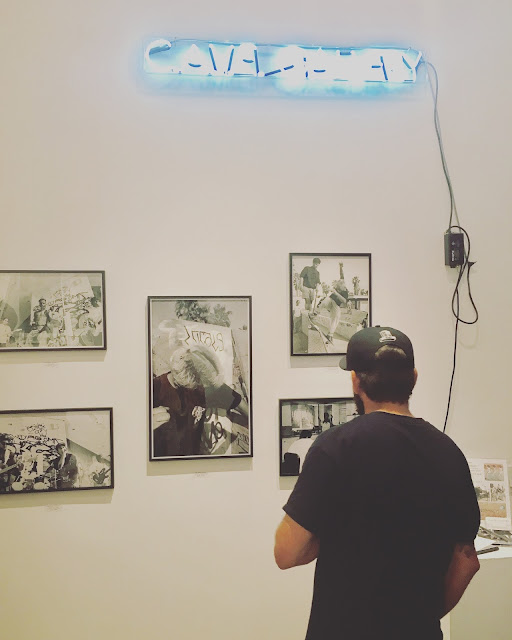 C.A.V.E. was packed with people in their Suicidal Tendencies sweatshirts and otherwise black clothing. It had been announced that Black Flag's Keith Morris was going to be there to spin the punk tunes, but he did not show due to a diabetic situation, we were told. Healing wishes to Mr. Morris! 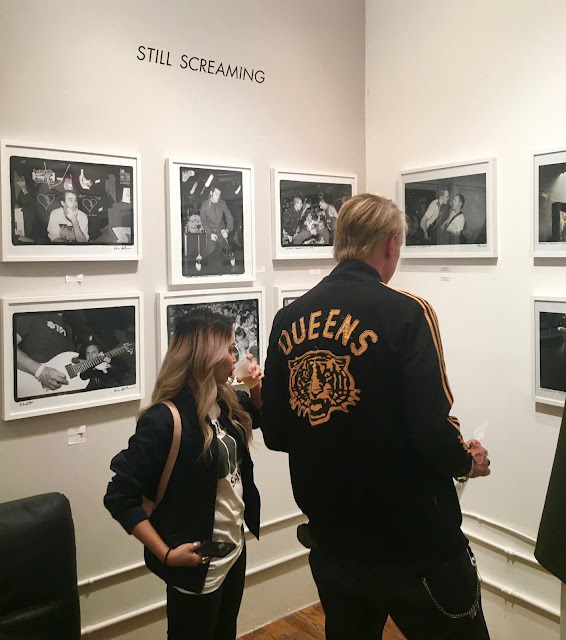 This Is Why I'm Such A Mess took over the back room was decked out with the whimsical works of Amanda "Mando" Marie & The Lost Object (AKA XO), with her little girls and ghosts beguiling the crowd. 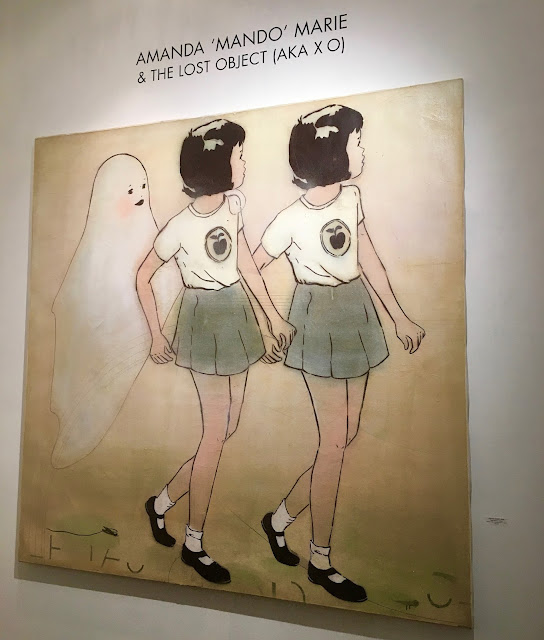 I also very much liked the wooden pieces that named beaches of Southern California, though Venice was missing, curiously. That would have sold for sure. 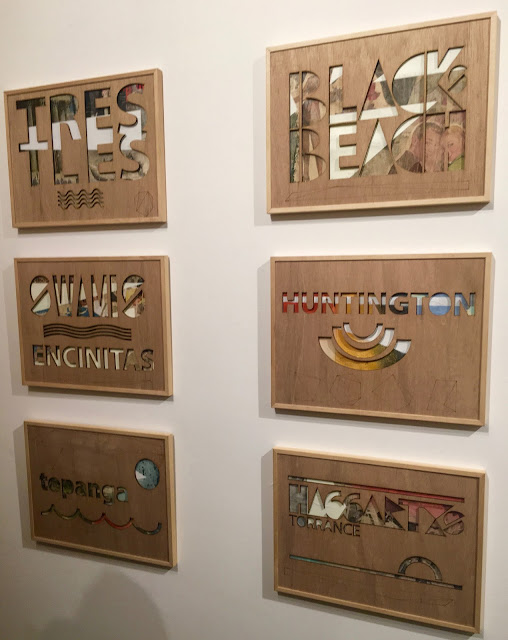 As it was pretty hot and crowded inside, a gang of us hung outside on the sidewalk, swapping tales and shooting the breeze. That was probably my favorite part, as you don't always get the chance to really stand around and talk with the homies at these events. We really slowed it down and talked, and remembered what we love about Venice ... exactly nights like these. Friends coming together for art and communion, and on this night we even got an extra big full moon to compliment it all. Dreamy. This show is on through July 3rd. 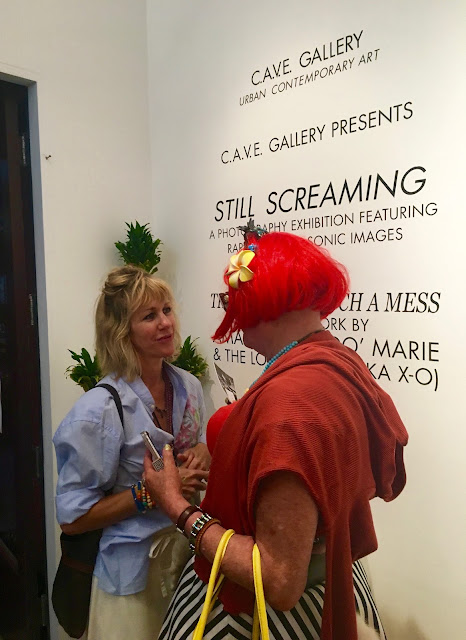 Sunday was the now annual Booze/Bands/Boil at The Cinema Bar, put on by my good friend, Matt Ellis. It was a gorgeous day, and after a fiery set by Chief White Lightning, we took it out back to the patio to indulge in the wonderful crawfish boil put out by our friends at Hatchet Hall. 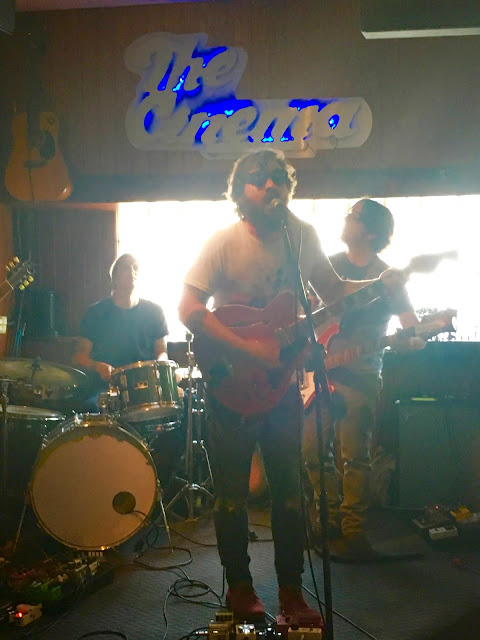 It's a very messy proceeding, but one that is always fun, always delicious, and once again, designed to bring about a communal vibe. Everyone is in the same boat, ripping off crawfish heads and sucking them down, with juice all over their faces. What a great time!

Lacey Kay Cowden was at her boot-stomping best, with her full band bringing it just as hard. The sunshine steamed in the windows, and her cinematic songs gave us all a bit of an escape ... not that we needed one. Things were perfectly great right where we were. 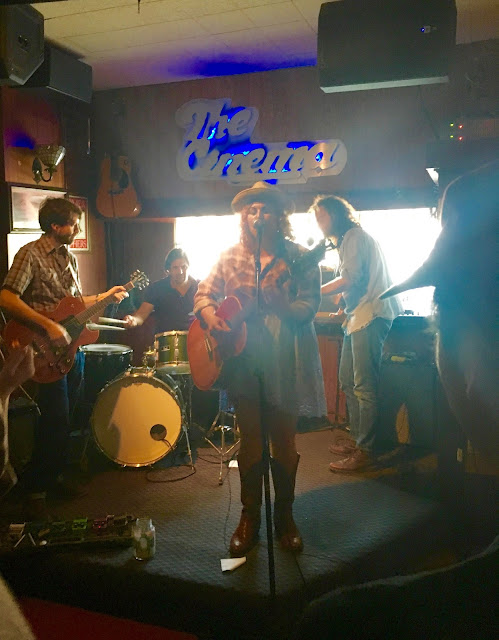 By now a whole lot of my friends had shown up, so it was back to the patio to do some laughing and catching up, but not before I caught a bunch of good songs by Kat Myer & The Buzzards, who I'd never seen before, but will now certainly keep an eye out for. They were great. 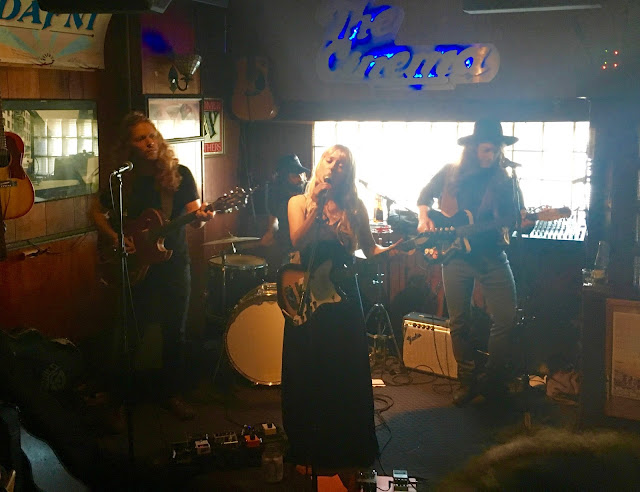 Golden hour found us laughing our heads off, and boy, was that needed. These escapism afternoons are pretty much the only things holding us together these days, and I was full of gratitude for all the great people and vibes. It really is what this life is all about. 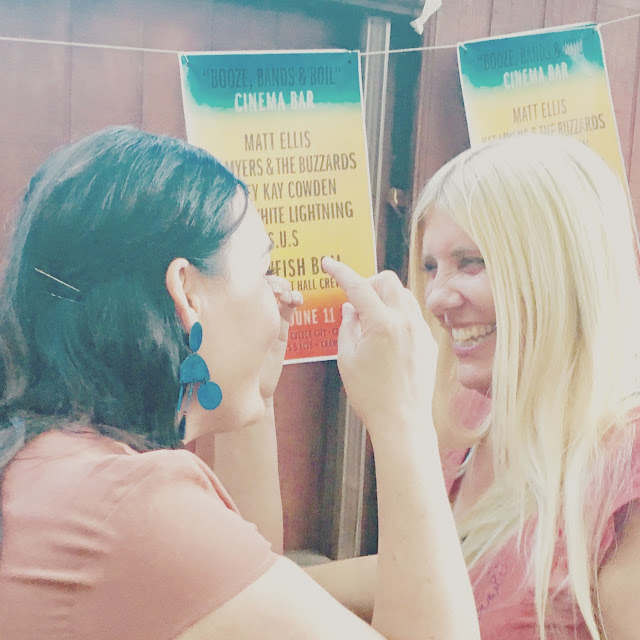 Matt Ellis and his full band were in excellent form to headline the proceedings, and we were all in there singing and dancing along the whole time. Any woes that had been brought along this afternoon were soon forgotten, as friends belted out their friend's songs with abandon. 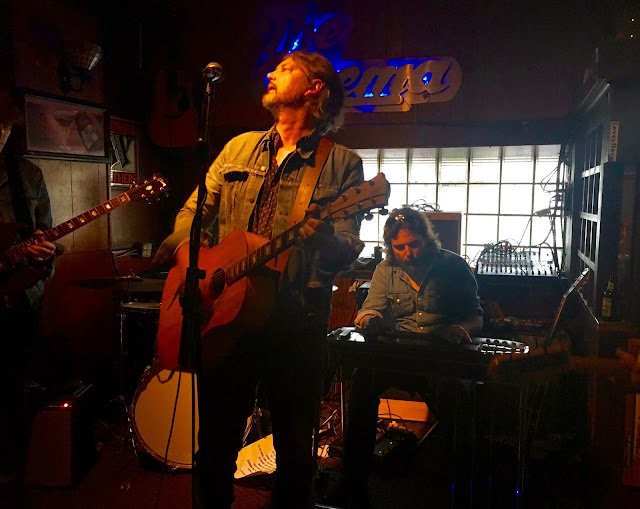 "They Don't Make 'Em Like They Used To" is the Matt Ellis/Paul Chesne duet that finds that title absolutely true ... they sure don't make 'em like these guys anymore. Make sure you get out to see them play - it's always a great time, and they play a lot. Lucky us! 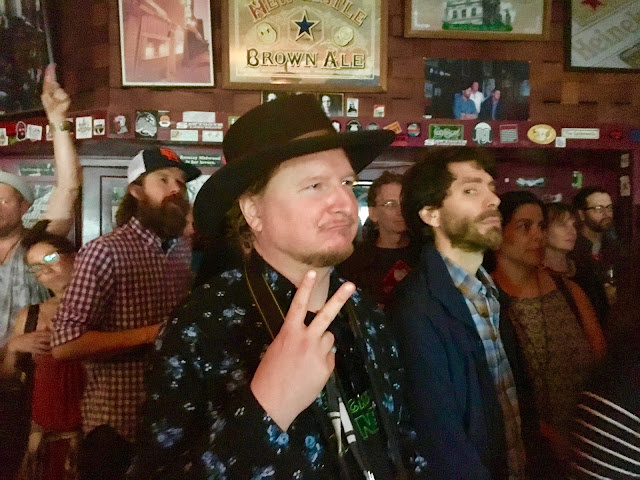 The Cinema's little stage is so small that bass player, Dustin Bookatz, stood on the floor along with the crowd. Each player (also Fern Sanchez, Josh Norton, and Tim Walker - all awesome) in Ellis' ensemble is so good, I always find myself getting distracted by watching one of them riff, and then snap myself back to the whole. Ellis ended his high-energy set with his "Hey, Mister" song, that we all again sang along to, reminding the Misters of now that we are not down with what's going on. Music for the People.

By now, the People were hungry again, and that meant Tito's Tacos. The line was insane, but the tacos were well worth it, as ever. It was again communally fun, as all the people in line chatted and mingled, and made even a long line fun. 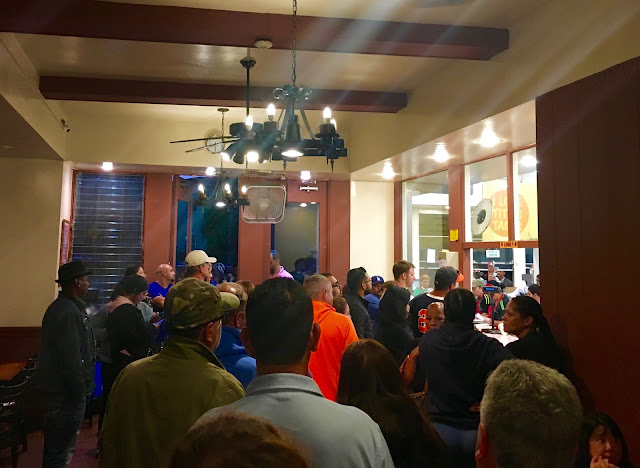 Back to the Ellis Ranch, for more tunes and more fun, and more denial that the weekend was coming to a close. One that had been great, and jam packed with all the things that make being in Venice (and its adjacent zones) so dang great ... especially in the Summer - which it's just now starting to feel like. I'll see you out there, everyone! Have fun, People!