The fantastic play My Girlfriend Is An Alien was up last night at the Pacific Resident Theatre, and finally got to see my next door neighbor, Ron Geren, in action. I'm so happy that we have this gem of a theater company right here in Venice, and am always surprised at how many locals have never attended a production there. That you can walk to. Why not break yourself in this weekend and catch this fun in the Co-Op side of PRT, as your last chance is this Sunday's matinee. I like going in to plays and films not really knowing anything about them, so it unfolds as a surprise. I'm hesitant to even write anything about this play before it's over, because I'd like the same for you, but I also want you to know about it, and GO - so ...

The curtain speech is made by the lead character, Keith DeFacto (Keith Stevenson), who claims to also be its author (but it's really Neil McGowan, directed by Guillermo Clenfuegos), warning the audience not to let their expectations be too high. Keith is a nervous wreck with zero self-esteem, and he just wants some human connection. What he gets instead is an Alien named Carole (Carole Weyers), a co-worker at his office. They meet having lunch on a park bench, and Carole is very convincing as an extraterrestrial, though Keith just sees it as charming, telling her she's like a parrot walking into an office of blackbirds. She falls for it - as would I.

A review posted outside of the theater said that fans of Charlie Kaufman would like this play, and they're right. The fourth wall is constantly broken, the author is ambiguous, it's a play within a play, the sets are changed in front of you, it's sometimes hard to discern if they're actor Keith and Carole or real Keith and Carole, but really it's actor Keith and Carol the whole time ... get it? You will.

Keith and Carole court in real and dramatic life, with a lot of miscommunication and self-doubt on both parts. Like pretty much all relationships. Keith laments at one point that he's a plagiarist hack who only wrote a cheap rip off of Mork & Mindy - which isn't true at all, but it's funny. Ron (my neighbor Ron Geren!) bursts in to help change the set, a bundle of enthusiasm and peer pressure. You miss him when he's not on the stage, and I'm not being biased, just honest. 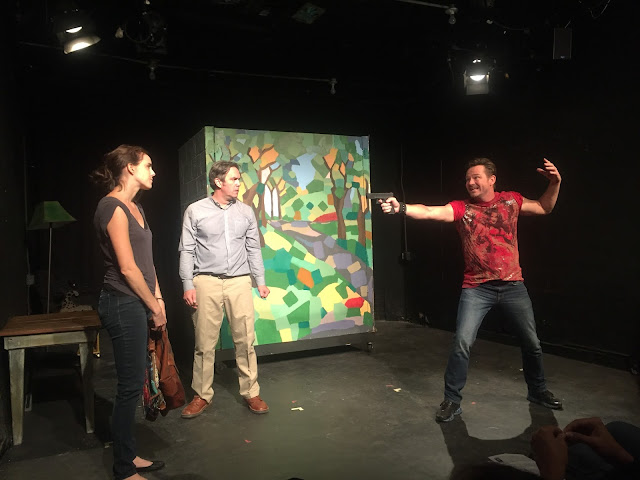 A scene stealing Doubt (a wonderful Michael Prichard) creeps in, in classic villain mode, top hat, twirling mustache, and all. We laughed just at him entering, and he only got better from there, even reading a review of the play aloud as it was happening (there's the Kaufman flair). Also great was the big dose of Reality (great Dan Cole) that slaps Keith in the face with life (also slapping us and the theater (a "Black, dusty fire code violation") in the face, but no offense taken).

One of my favorite speeches of the play was Keith recalling his first memory, of being warmed by a giant ball of comfort in the sky that he didn't understand, but that's what it felt like to him when he was with Carole. Ummm ... swoon. That pretty much does the trick after Government type agent Elspeth (Elspeth Weingarten) berates Keith, and Carole freaks out on him for being a fake, and Keith is back in there. That honesty and vulnerability (that you wish guys actually had), coupled with the Inspiration (Sophie Pollono) that emerges beautifully out of the darkness, is enough to show Keith that he really is good enough ...,for creating something great, for having friends, and most importantly, for love. Carole voices the truism that "We're all aliens to our own hearts", and that's ok. 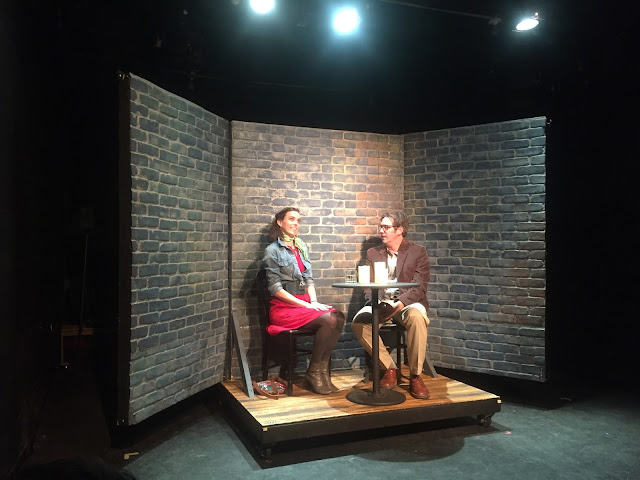 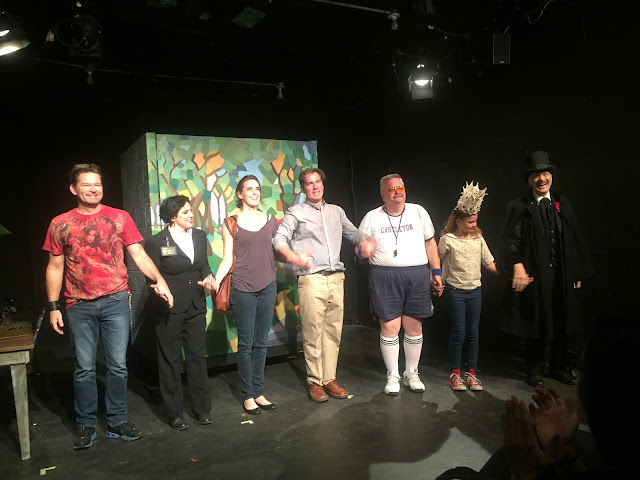 I had no idea what to expect when I went into this creative, whimsical production, and I'm so glad, because the entire thing was a delightful surprise. One that I hope you get a chance to see during its Pacific Resident Theatre run, which ends this Sunday at the 3:00 p.m. matinee show. See everything at PRT for that matter ... it's always a joy.

My Girlfriend Is An Alien goes dark this Sunday, October 2nd. See it if you can!