Jeff Lynne's ELO and the L.A. Philharmonic just shared a three night stand at the Hollywood Bowl and those shows were something to behold. The truly nightmarish Friday night traffic (Thanks, Vice President Biden!) came close to road rage inducing, but the show served as an excellent balm to frazzled nerves once inside the Bowl. We were late, but we were not alone, as hundreds of people were pouring in still behind us. The Bowl staff holds you from your seats until there's a break in the music, so we missed the National Anthem and the first orchestral selection, but it sounded lovely from the concourse. 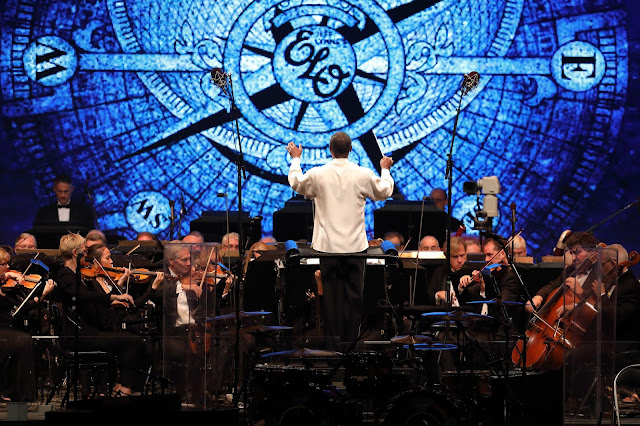 Once settled in to our seats, the pastoral sounds of a Vaughn Williams March, "Seventeen Come Sunday from English Folk Song Suite played beautifully by the L.A. Phil (conducted by cool cat Thomas Wilkins), instantly relaxed the vibe. It helped that the entire Bowl was a light show, so all senses were fully alert and stimulated. It was awesome right from the beginning, and only got better as the night progressed. Wilkins has a great way with explaining classical music, and a sharp wit, so you look forward to his commentary as much as the music. "You an almost smell the fresh air of the English countryside," said Wilkins, and he was not wrong. that led into two pieces from Sir Edward Elgar, the first being "Nimrod" from his Enigma Variations. It was written for his best friend, and as Wilkins described it, was "Music inspired from true love." You could absolutely feel it. 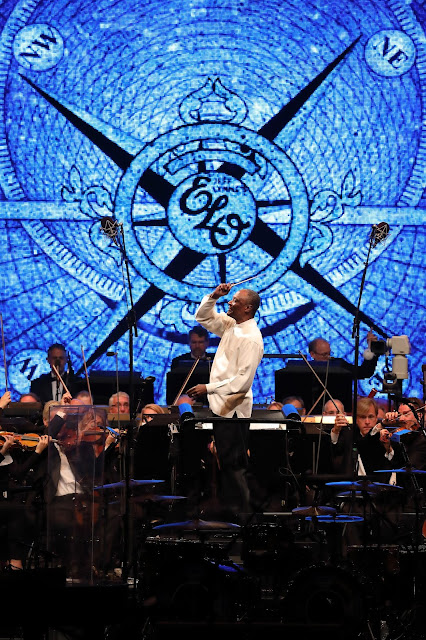 As the gorgeous sounds swirled around us, so too did all kinds of lasers and prisms and spaceships not only on the jumbo screen, but projected on to the actual Bowl bandshell as well. It felt like we were actually WITHIN the music, and it was excellent. When they closed the first part of the show out with Elgar's Pomp & Circumstance March No. 4 in G, Wilkins said it was not only one of the most beloved works in England, but in all music - and it was clear to see why. It was so transcendently beautiful that even Wilkins raised his firsts in triumph at its conclusion. What a joy. 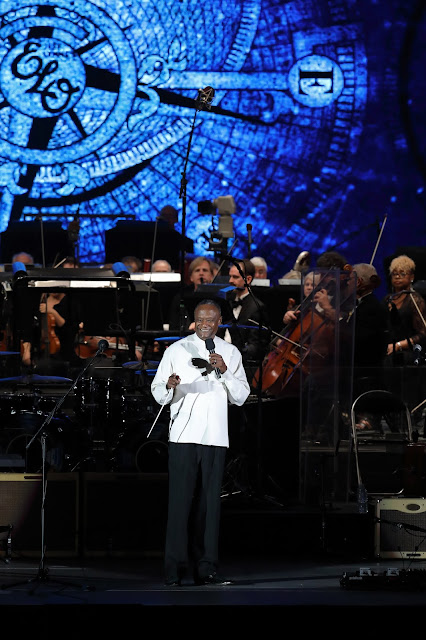 Intermission was fun as we met and chatted with our very cool box mates and people around, all of whom were thrilled to be getting to see ELO after like 30 years since they've played the U.S.  When Jeff Lynne and the current line-up of his ELO came out with the L.A. Philharmonic players, the place just went nuts. They lit right into "Evil Woman", stoking everybody in there, but none more than the man a few rows in front of us who turned into a dancing machine the moment it began. He was almost as entertaining as the very trippy light show, and that's saying a lot. I've never done acid, but I kind of felt like I had when watching this light extravaganza. 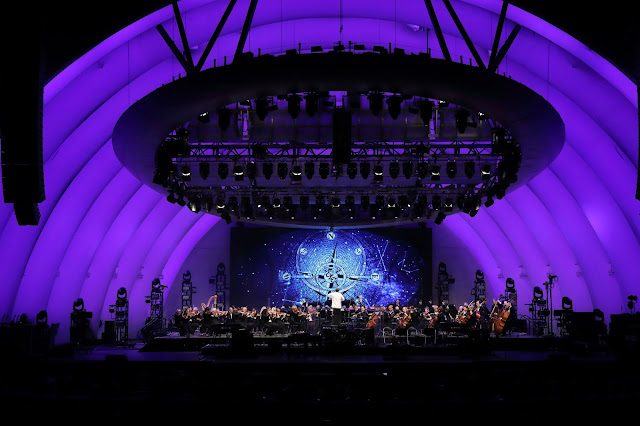 I was also having strong childhood AM radio memories, as all of these ELO songs were hits from back in the day. "All Over The World" featured a world map of lights - and more strong dancing from the Dancing Man, who at this point jogged up the aisle and bumped fists with us all. STOKED. I was happy for him, and maybe a bit jealous that I didn't share his dancing nerve. Lynne addressed the crowd (with his sunglasses at night), saying it was his first time ever playing the Bowl, and that it was beautiful and marvelous. He was fully correct. Before jumping into "Love and Rain", Lynne introduced his daughter Laura, who was performing with him on backup vocals. It was sweet, because you could tell she wasn't all that into being thrust into the spotlight, and also tell how proud he was to be doing it. "She's a lovely girl, and she sings good too!" Dads. 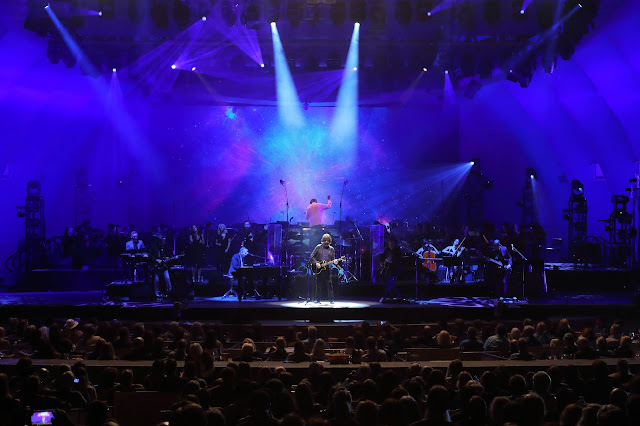 "Livin' Thing" was a real highlight, as it was clear it was many in the crowd's favorite song - but then that was a phrase I kept hearing throughout the show, so there were many highlights for many people. Everyone was up and dancing, and it really was as magic as the lyrics imply. The screen turned into a lava lamp-like projection for "When I Was A Boy", and I thought how awfully similar Lynne sounds to Paul McCartney at times, but especially on this one. "Don't wanna work, just wanna play my guitar instead" probably inspired many young boys, like the one that was now all the way grown and shouting, "YEAH JEFF!" the moment it was quiet. I get it. 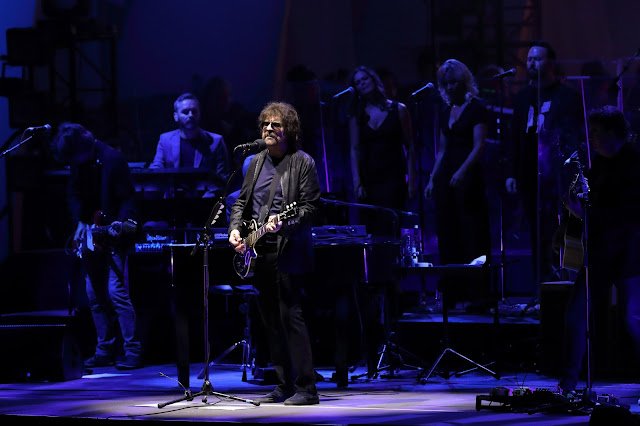 A woman sang an operatic aria to open "Rockaria" and the Orchestra really shone on this one too (as they did on every single moment, to be fair. They're incredible!). "This is my favorite song!" chimed in my friend in my box for the opening chords of "10538 Overture" that also featured virtuoso playing from Orchestras, both electric and regular. SO good. "Can't Get It Out Of My Head" was extra dreamy, probably made more so by the pretty much required and massive clouds of ganja floating overhead. There were all these new prism like lasers flying around and when I mentioned that I'd never seen those light show things, the guy next to me said, "Oh, that's just you, I don't see anything" - just to mess with me. Which was appreciated. 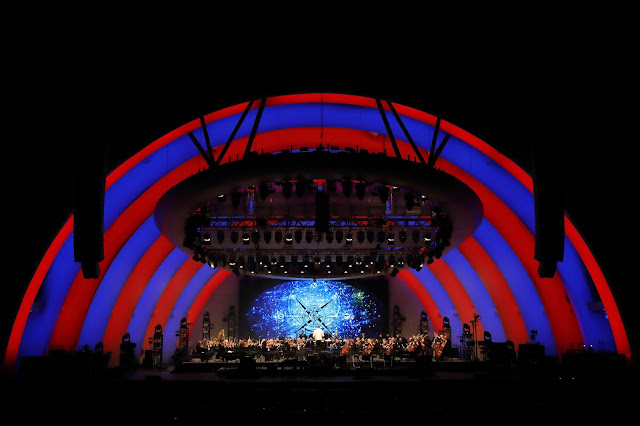 "Shine A Little Love" turned the Bowl into a complete Disco dance party, and the ushers pretty much gave up hope of keeping people out of the aisles, as a LOT of love was being shone. "Wild West Hero" might have been my favorite, as it was accompanied by stunning visuals on the screen, and wonderful a cappella harmonies. It was super inspiring, and made me and everyone else really, really want to be wild west heroes. Of course. Lynne introduced his longtime piano player, Richard Tandy (who also shone on a voice box ala Peter Frampton!), but left the introductions of the rest of the players up to his band leader (it must rotate fairly often). They resumed with "Telephone Line", and it was here that I noted that the entire show was a veritable feast for every sense, with all the music and lights and fresh air, and wonderful food for the belly as well. The Bowl is the best and that's just that.

The classic rocker "Turn To Stone" was rad (as were the asteroid field visuals), and "Sweet Talkin' Woman" was equally great, but the place REALLY went off for "Don't Bring Me Down" which changed my mind and was now my favorite (my notes say "Everyone LOVING it!"). "Mr. Blue Sky" was equally joyous, maybe even more so. The band took a triumphant bow with Wilkins after this one, and they all turned their backs to the audience to get a selfie with us in the background. I'd like to see it, because everyone must have looked SO happy. 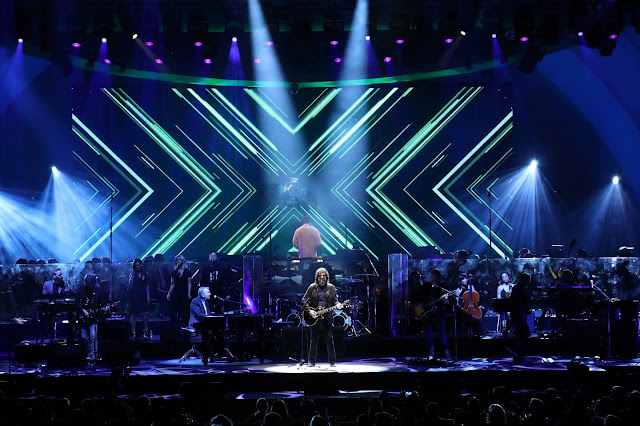 Everyone came back for the Fireworks Finale, that really was spectacular. "Roll Over Beethoven" was the selection, and the Orchestra began with the very serious/famous tones of Beethoven's 5th, then the ELO came in with the rock, and had there been a roof, it would have been obliterated off at this point. The Fireworks burst in the air above the Bowl, the screens were full of spinning records and more trippy lights and the crowd was absolutely thrilled. All the players were working so hard that I thought to myself how weird it must be to not be seeing how very cool it all looked above and around them. As the last notes rang out, the performers were met with such an ovation that their ears are probably still ringing today (especially after two more nights of this!). It was simply wonderful, and I didn't even know how much of a fan I was until I experienced this show.

Another fantastic show at the incredible treasure that is the Hollywood Bowl. Many thanks to all involved in creating a unforgettable night of music and spectacle. ELO!!! Awesome.


* Photos courtesy of The Hollywood Bowl and Matthew Imaging.