I have never been a member of the BeyHive, but after seeing Beyoncé live for the first time last night at Dodger Stadium, I think I might be in there. Destiny's Child was never my thing, and I've had a bit of a chip on my shoulder for Beyoncé for her past instances of trying (TRYING) to upstage Prince (See that one Grammys. See surprise dropping her Lemonade album like a day after Prince died. Please.), but I went because you should see everyone once, right? I even felt bad because I know how many people out there LOVE her and would have sold their souls to go. So, I adjusted my attitude and went. And I'm so glad I did. WOW. 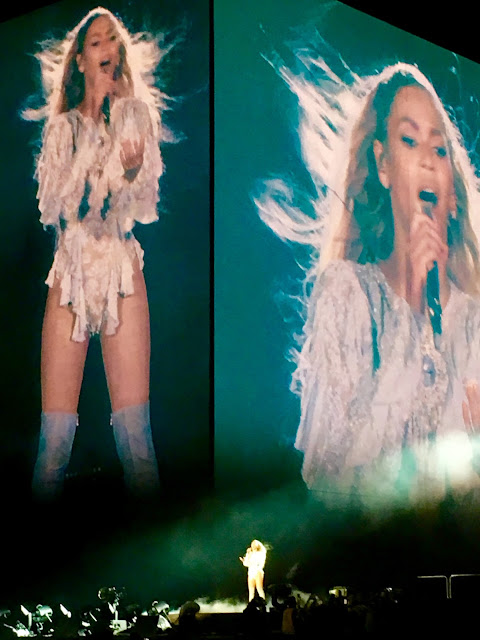 The traffic getting to Dodger Stadium was so bad I don't even know if I'd attend a show there again. Like people were getting out of their Übers and walking the rest of the way it was so bad. We left before 7 and didn't park until shortly before 9. Then had like 5 miles of parking lot to walk, which seemed tough for the many men in drag that showed up. Once inside and in the eternally long bathroom line, the stadium went dark and everyone lost their ever loving minds at the beginning of "Formation". I've never heard such screaming from grown women - and men. This show is a SPECTACLE. Skyscraper-height video screens. Fireworks. Regular fire. Aerial artists. An army of dancers. And Beyoncé. 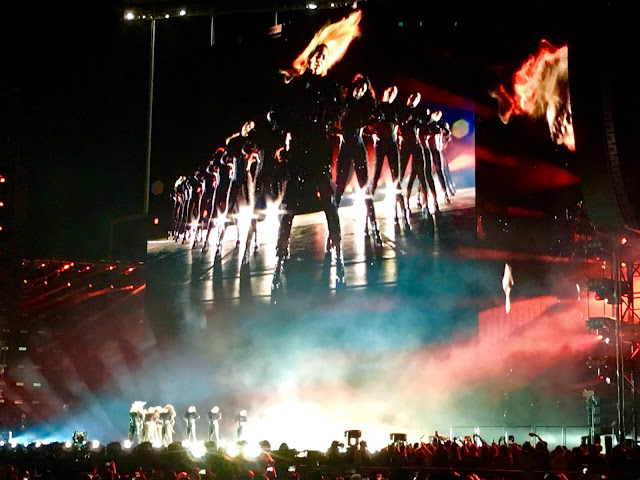 What an impressive woman. I got into it pretty early, as I'm always down for badass women, and Beyoncé is taking names. She is a Boss. She is Fierce. She really is all of those things. As I watched her perform flawlessly- and look like she was having a blast doing it - smiling and tossing her giant mane around, I finally got it. But I was still thinking wow, that's a pretty big ego right there. The whole production is very, very self-aggrandizing ... I mean, she calls herself The Queen. OK.

But then it was time for yet another (amazing) costume change, and the lights went out. except for a giant blank purple screen. The opening chords for "Purple Rain" began, and the entire Dodger Stadium lit up and sang along for Prince's recorded version. I will admit that I have now cried at a Beyoncé concert. It was extremely moving, and also very classy, that she would concede the stage to the memory of Prince, and not even try to sing it herself. I finally got a big public memorial moment. That did the trick. I'm a fan.


By the time Beyoncé and her dancers stomped around on the water stage for "Freedom" ... I was strongly considering getting copycat braids and strutting around with a fur coat and baseball bat every day. It really was an incredible show. Standing there dripping wet, singing and dancing her heart out, it's hard not to appreciate the absolute ALL that this entertainer gives it. 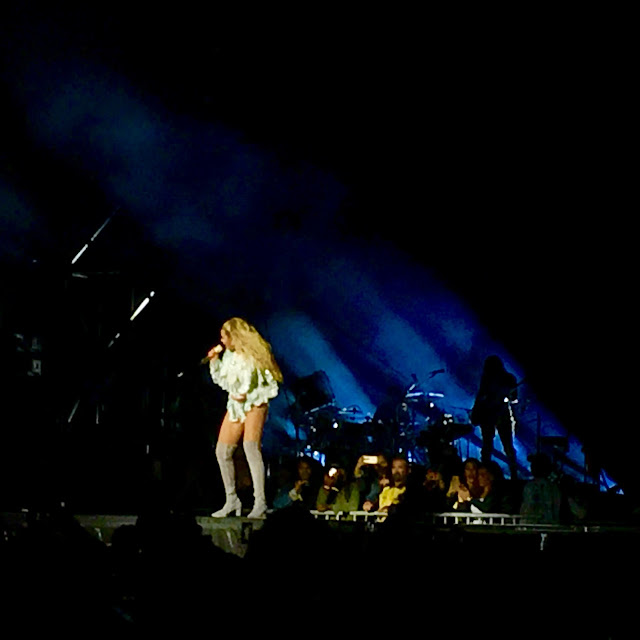 "This is LIFE!" yelled the total superfan sitting next to me, and while I think there might be a bit more to it, I can agree that it was a pretty cool part of it.