Spring has sprung up all over, and last night's edition of the Venice Art Crawl celebrated that the way we do best ... with art and fun and color and community, everywhere you looked. The central meeting point this time around was Westminster Avenue off of Abbot Kinney, which had been closed to traffic for the occasion. I love when we get to party in the streets. 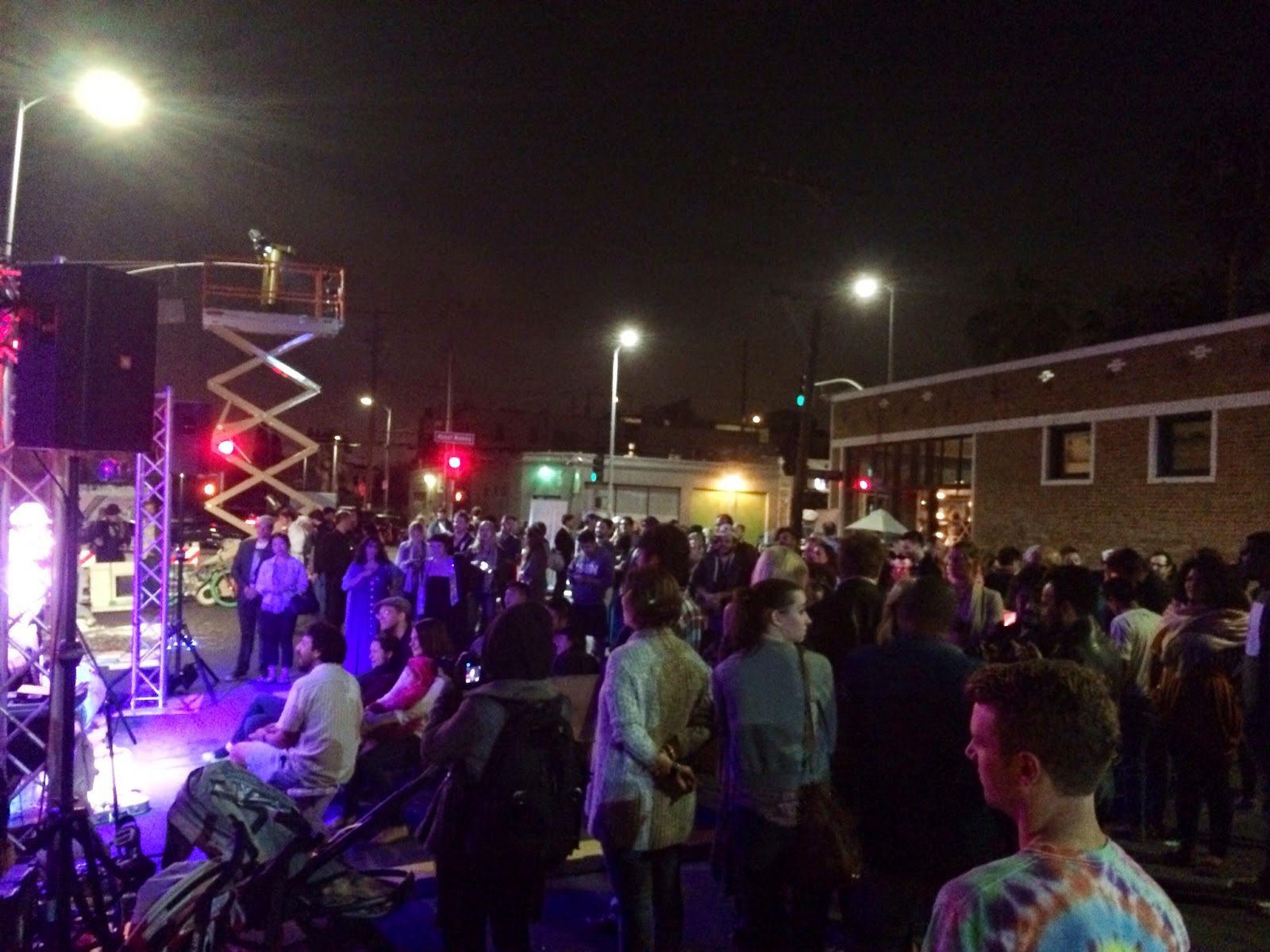 Westminster was happening, and all of it served to bring the people together in the name of art and fun. Much of the art was interactive, which added to the overall vibe of community involvement. I got a late start due to work stuff, so I never even bothered to put together a posse, knowing I'd bump into friends and neighbors all along the way. Which I did. The very first person I came along was the wondrous and talented performance artist, Amy Kaps, dressed like Spring itself, sweeping up and giving out flowers as she traversed the avenue. Perfect. 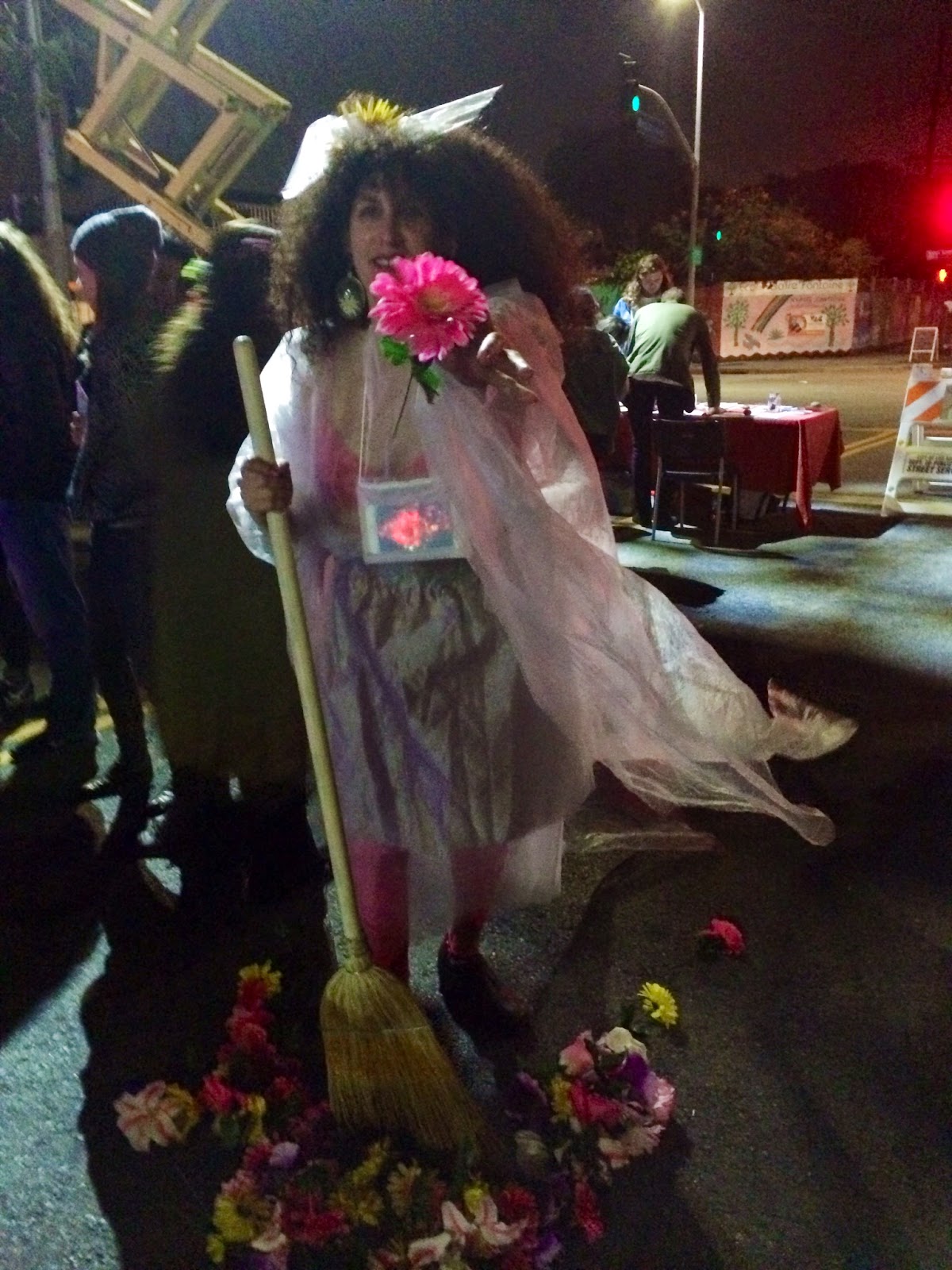 There was a lot of live painting going on, as Westminster basically became an open air studio, complete with live entertainment. 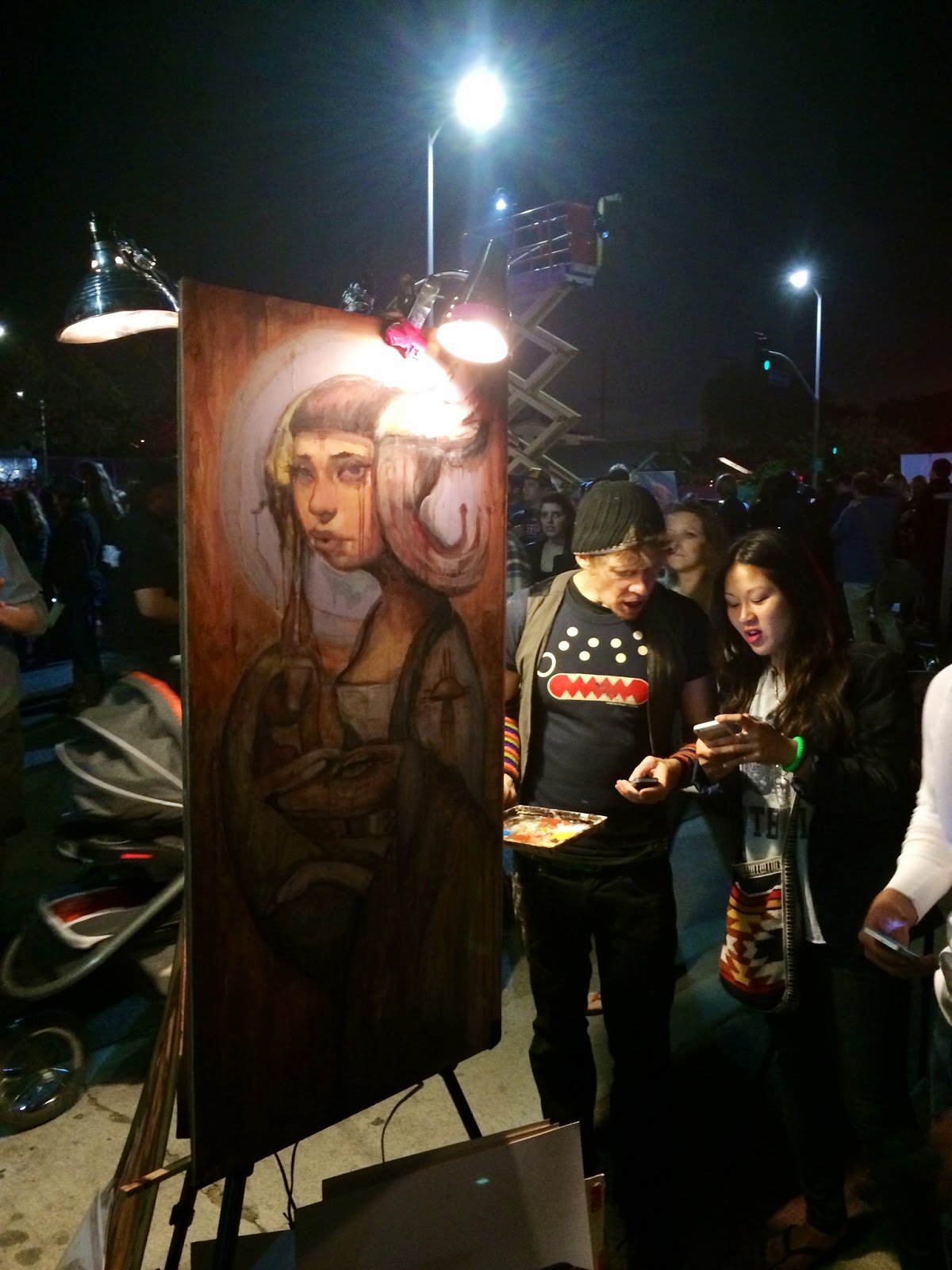 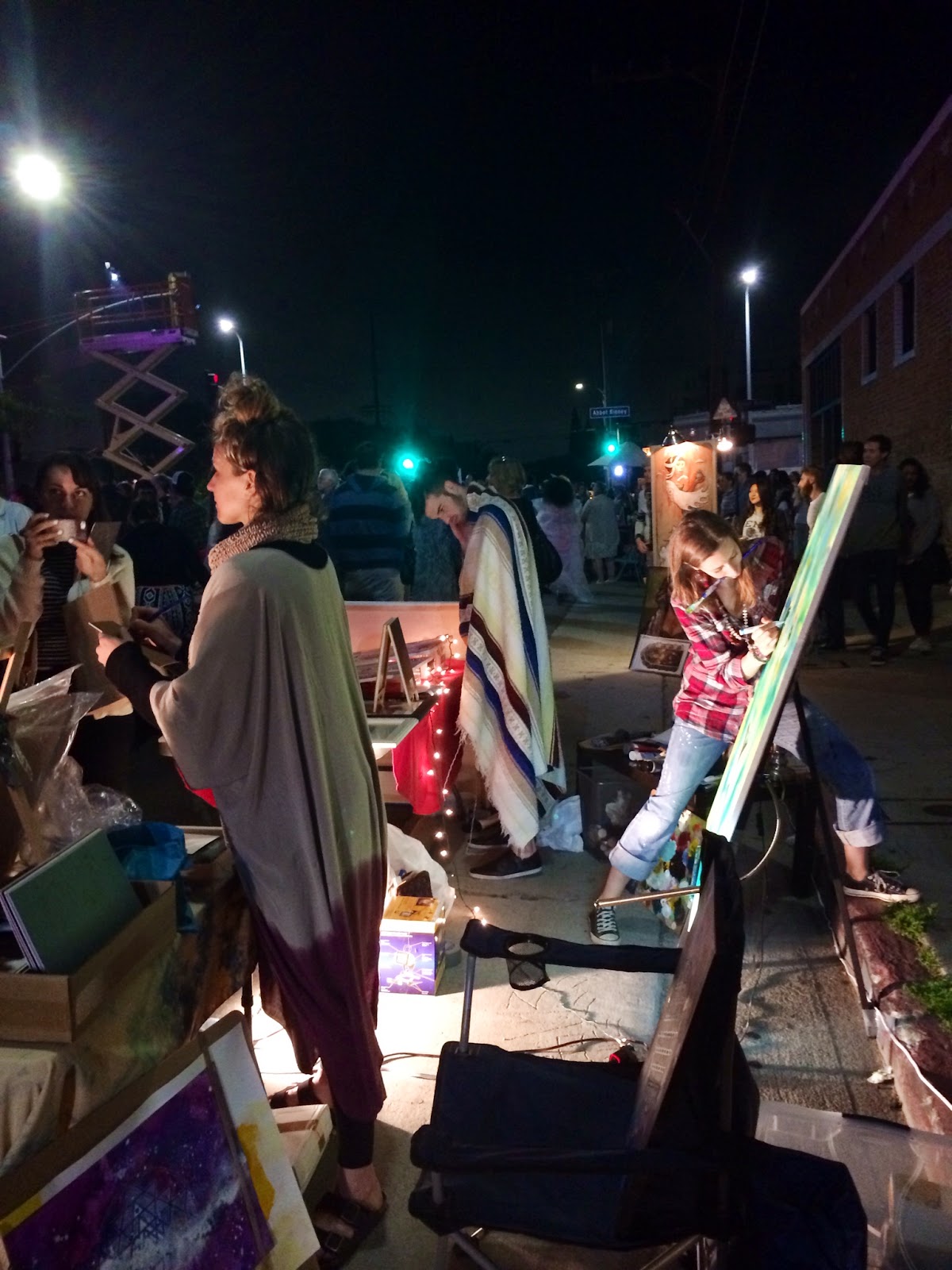 There was an enthusiastic poet at the stage, which I always like to see. Venice itself is a poem every day, so we need as much of that as we can get (whether you care for it or not, it's an important part of our very fabric of the town). 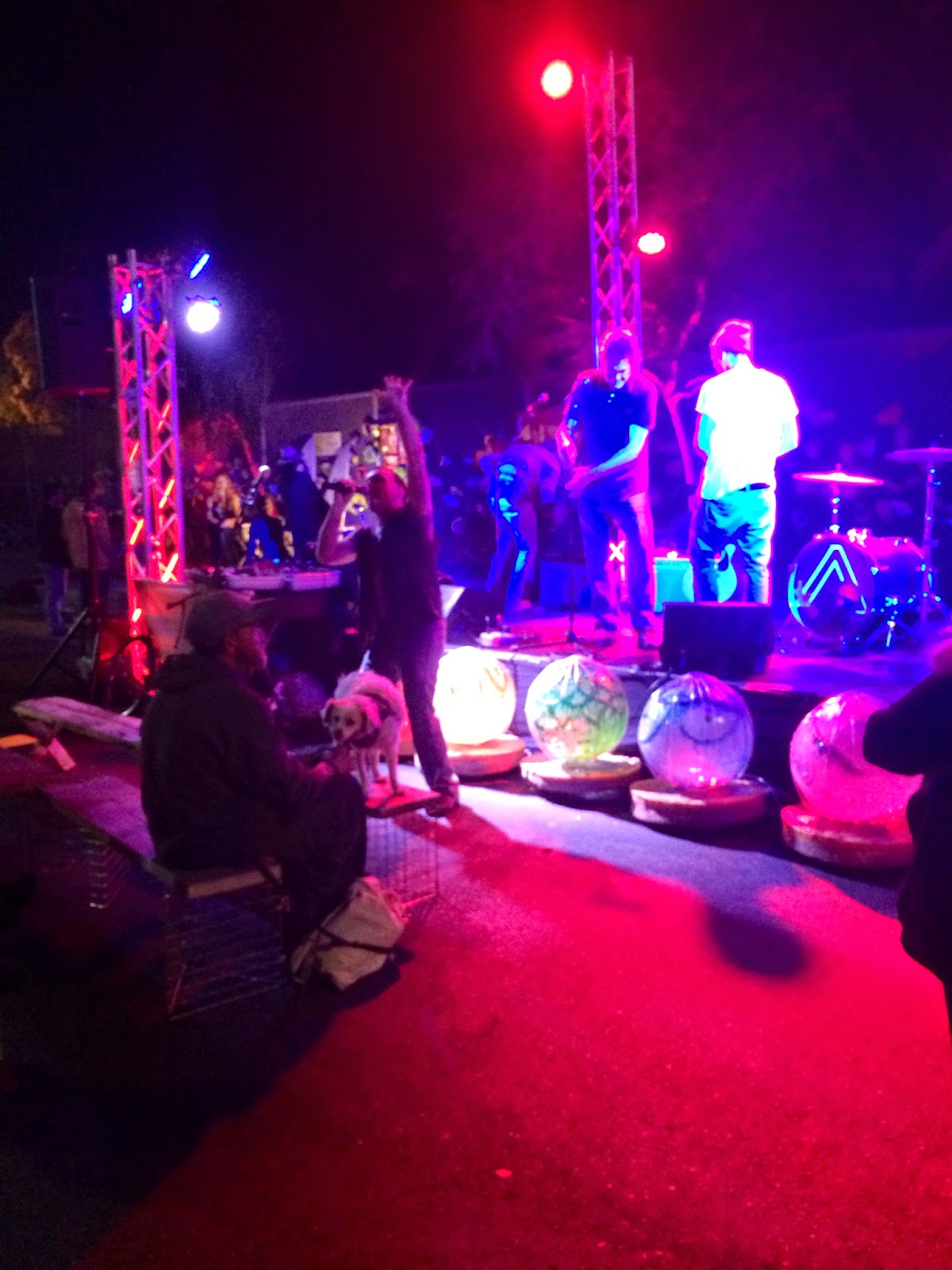 There was an almost vaudevillian show put on by Super Tall Paul, a tall dude that played tennis ball cans, and a mean electric flute. 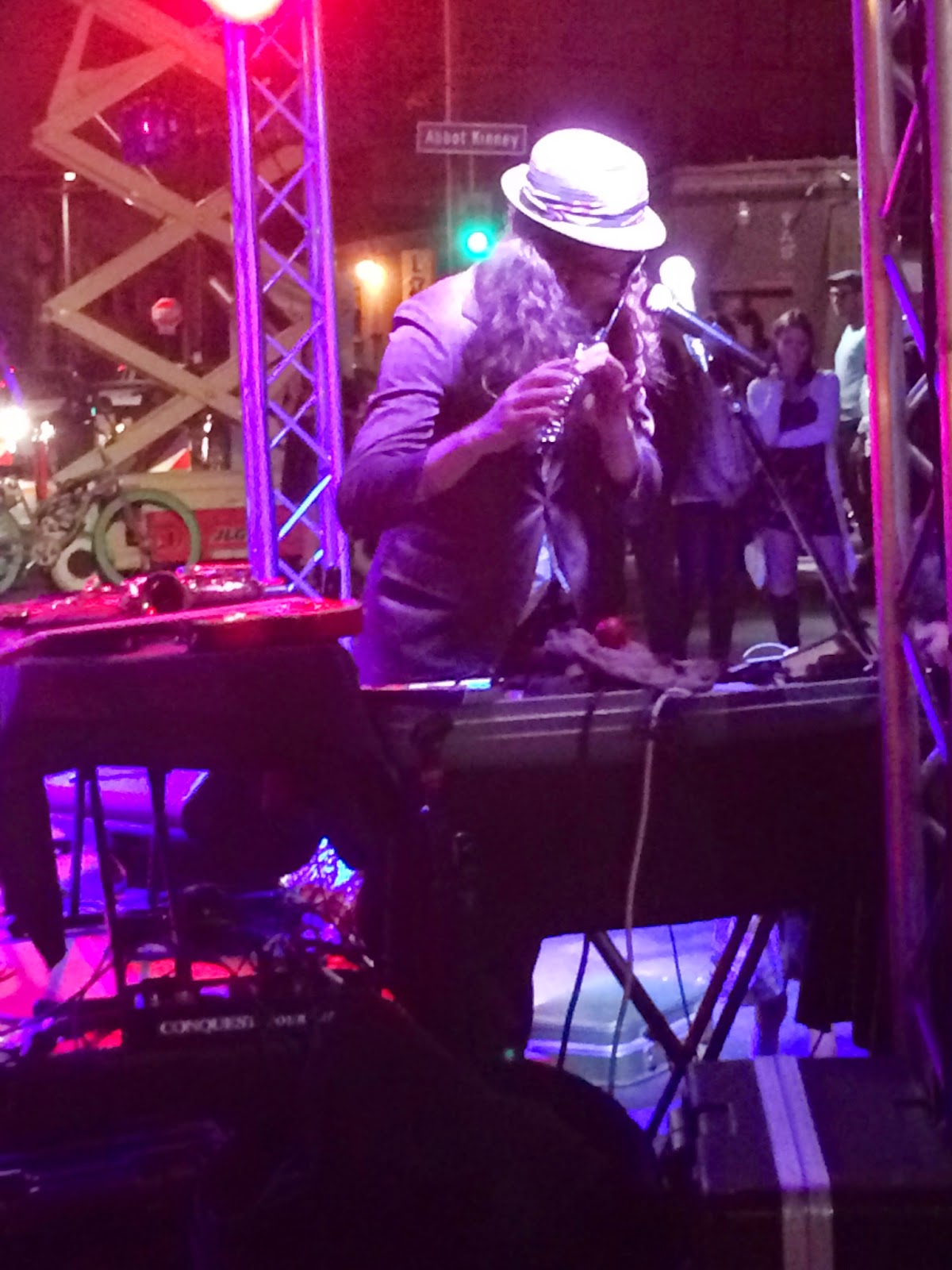 Over at In Heroes We Trust, there was the hula hooping headquarters outside ... 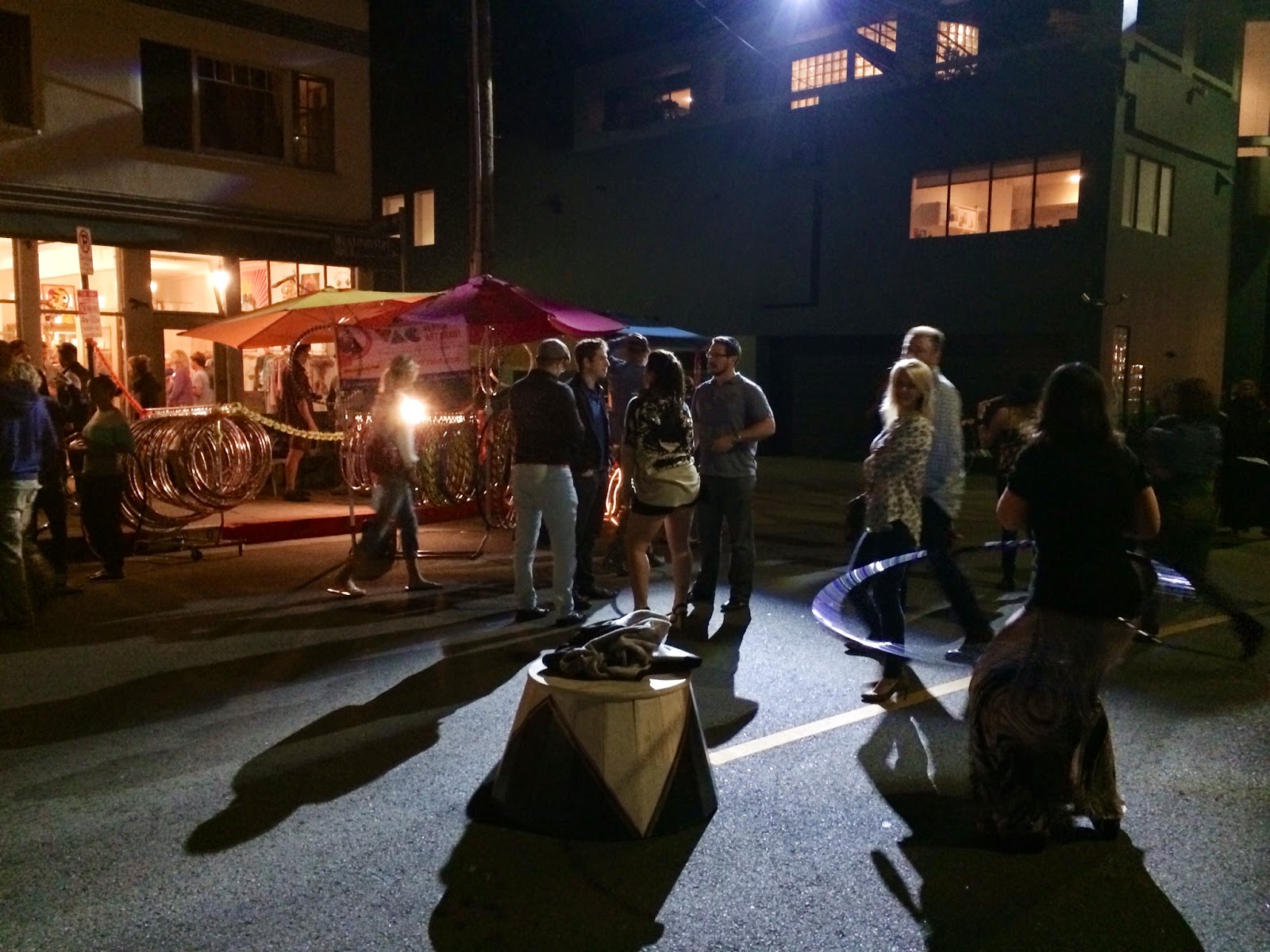 ... And a whole bunch of wearable art for sale from their collaboration with local streeet artists who have done limited edition hats and tees for the shop. There was also wine, in true art opening fashion. 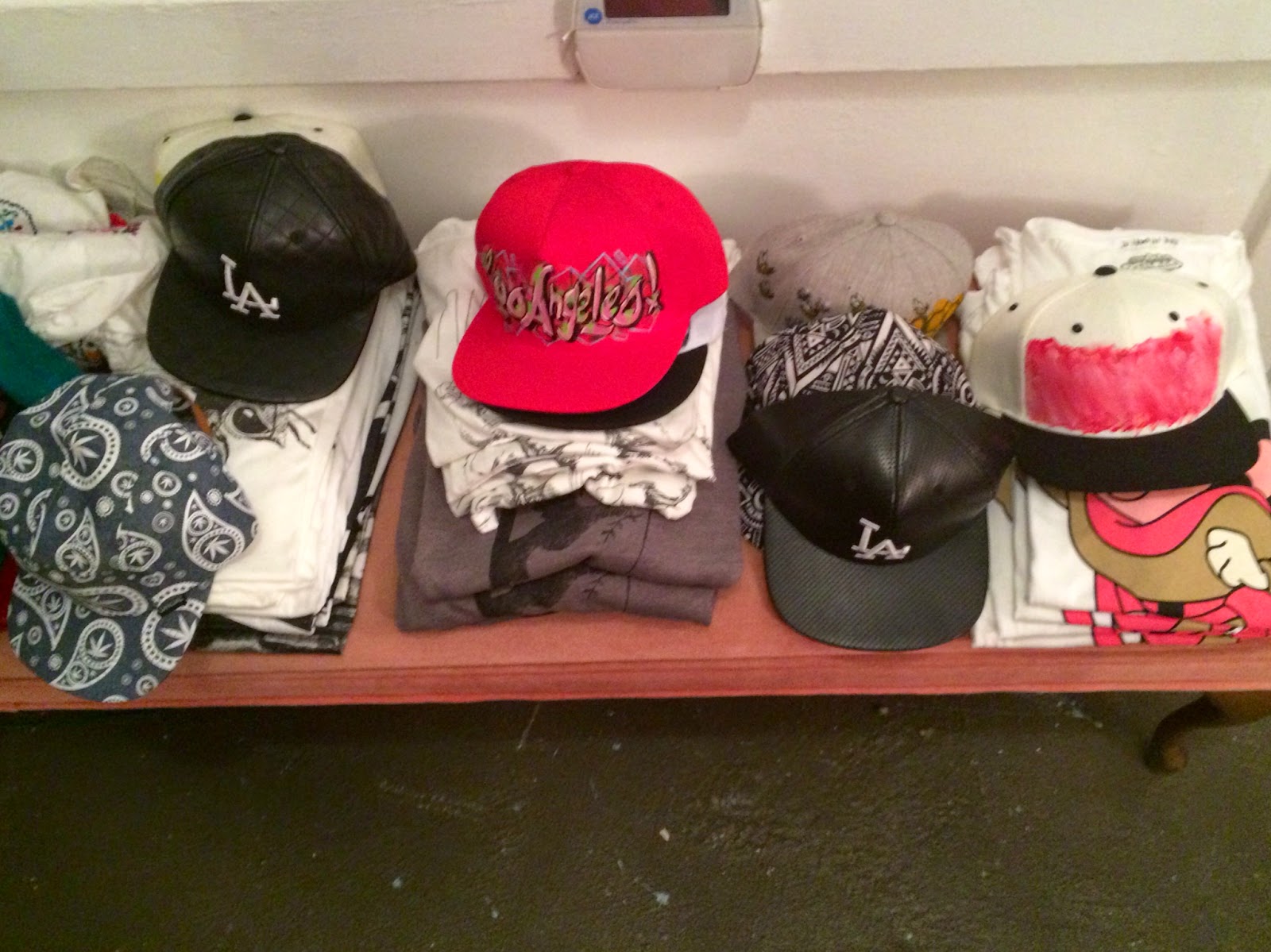 There was an appearance by the Yellow Submarine. 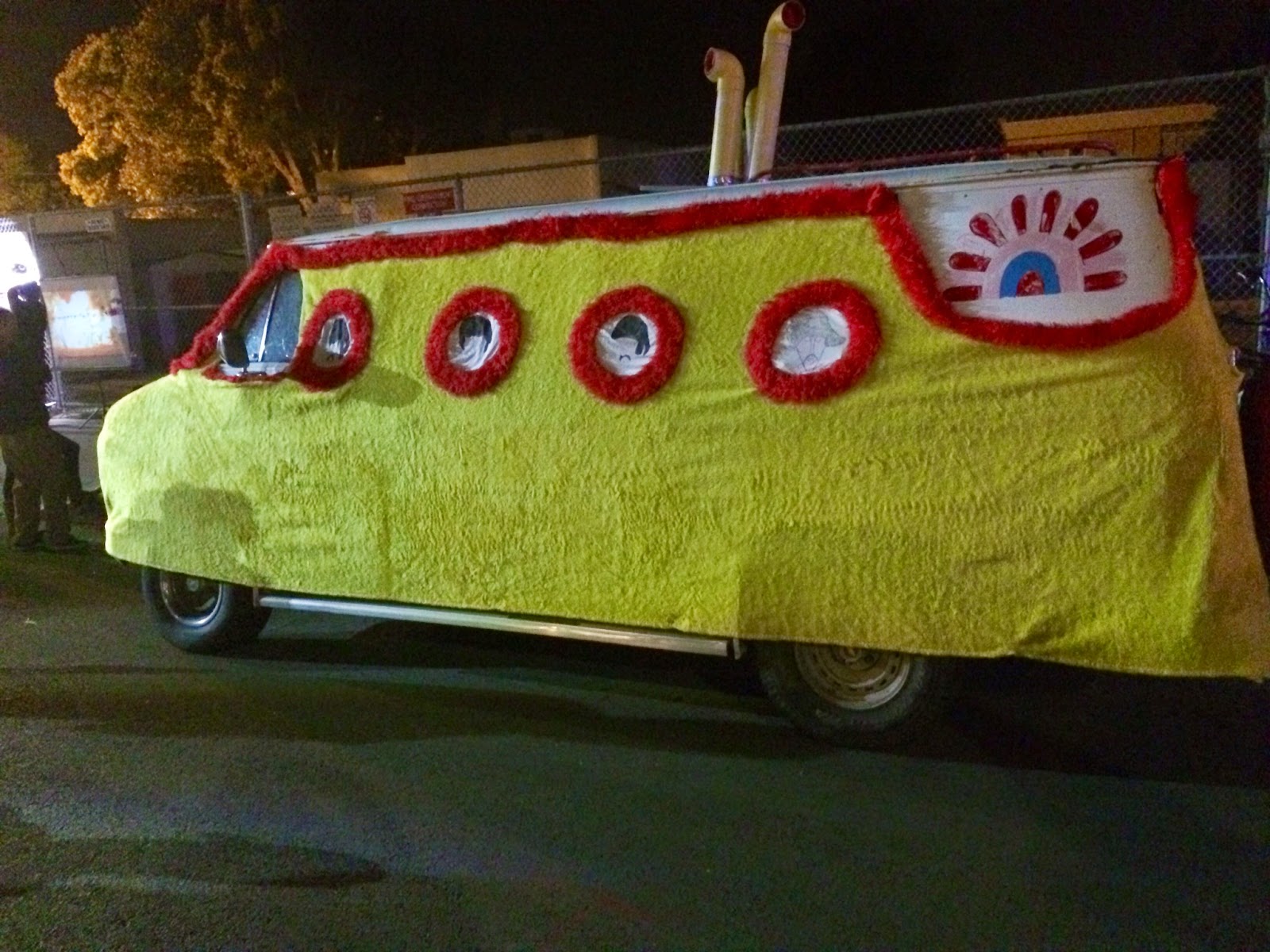 There was a man doing live portraits of passersby that were fun to watch take shape. 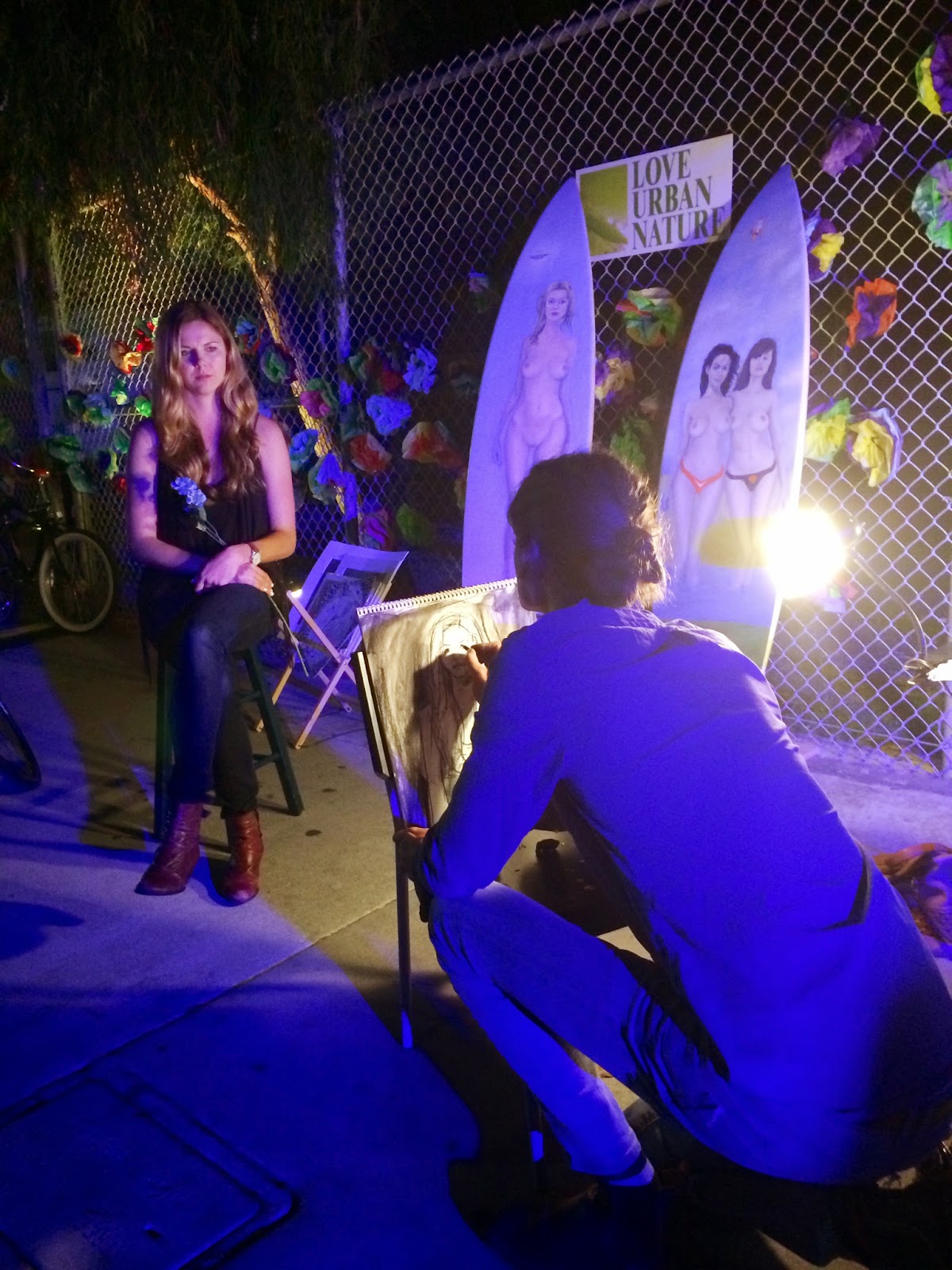 A popular attraction in the street were the "Infinity Boxes", where people look at each other through smoke and mirrors. I have to admit I still don't really get it, but it's fun, and created good interaction between strangers, which is one of the best things about the Art Crawl. 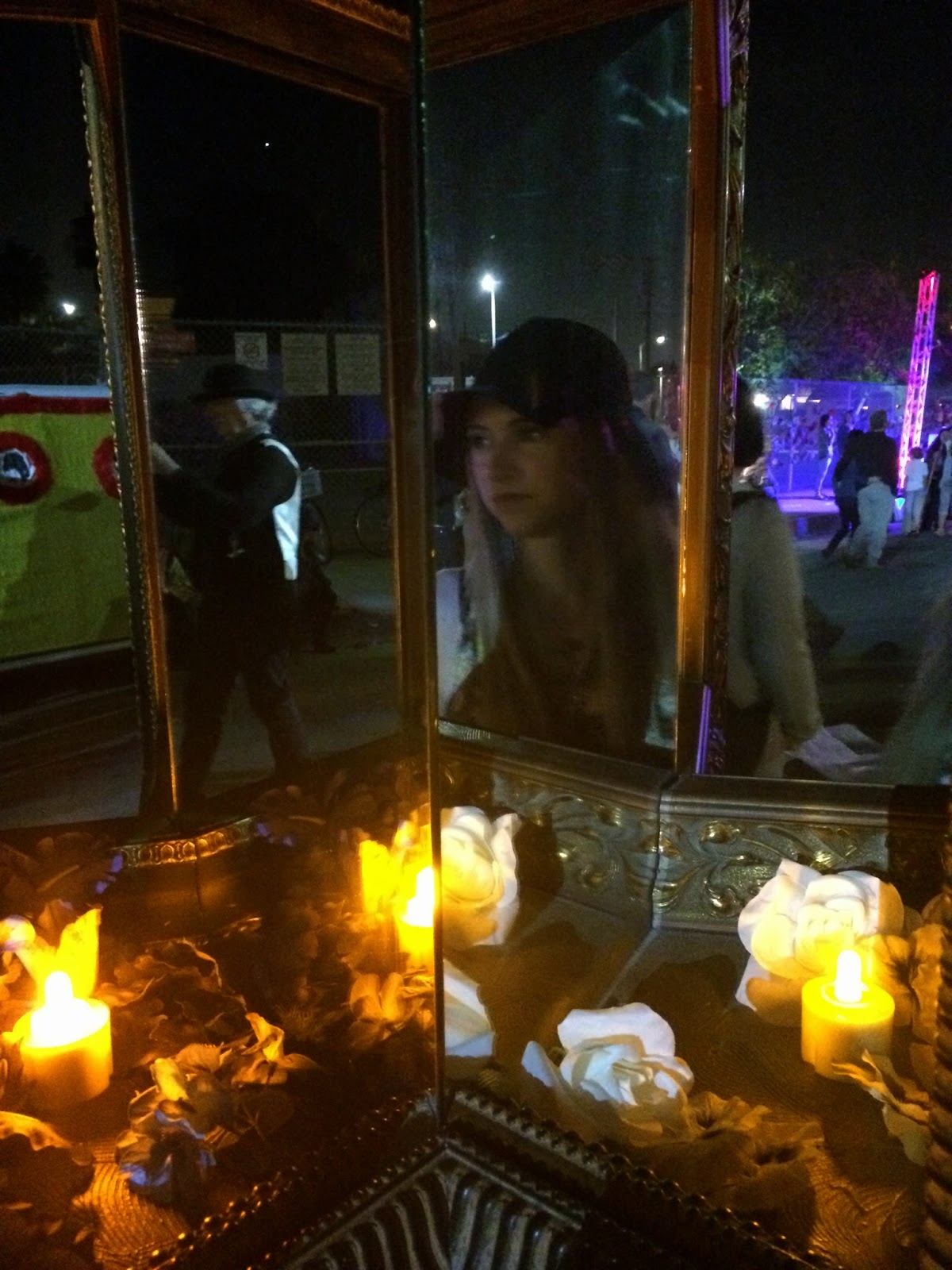 The highlight of Westminster - and I think the whole Crawl this time - was the very cool installation Hydra by Franklin Londin of a bunch of Viewfinders in a circle. When you looked into them, there were different photographs of women underwater. People looked and then rotated to the next one, again all the while meeting people, talking, sharing thoughts and ideas. That's what I really love the most about these nights. 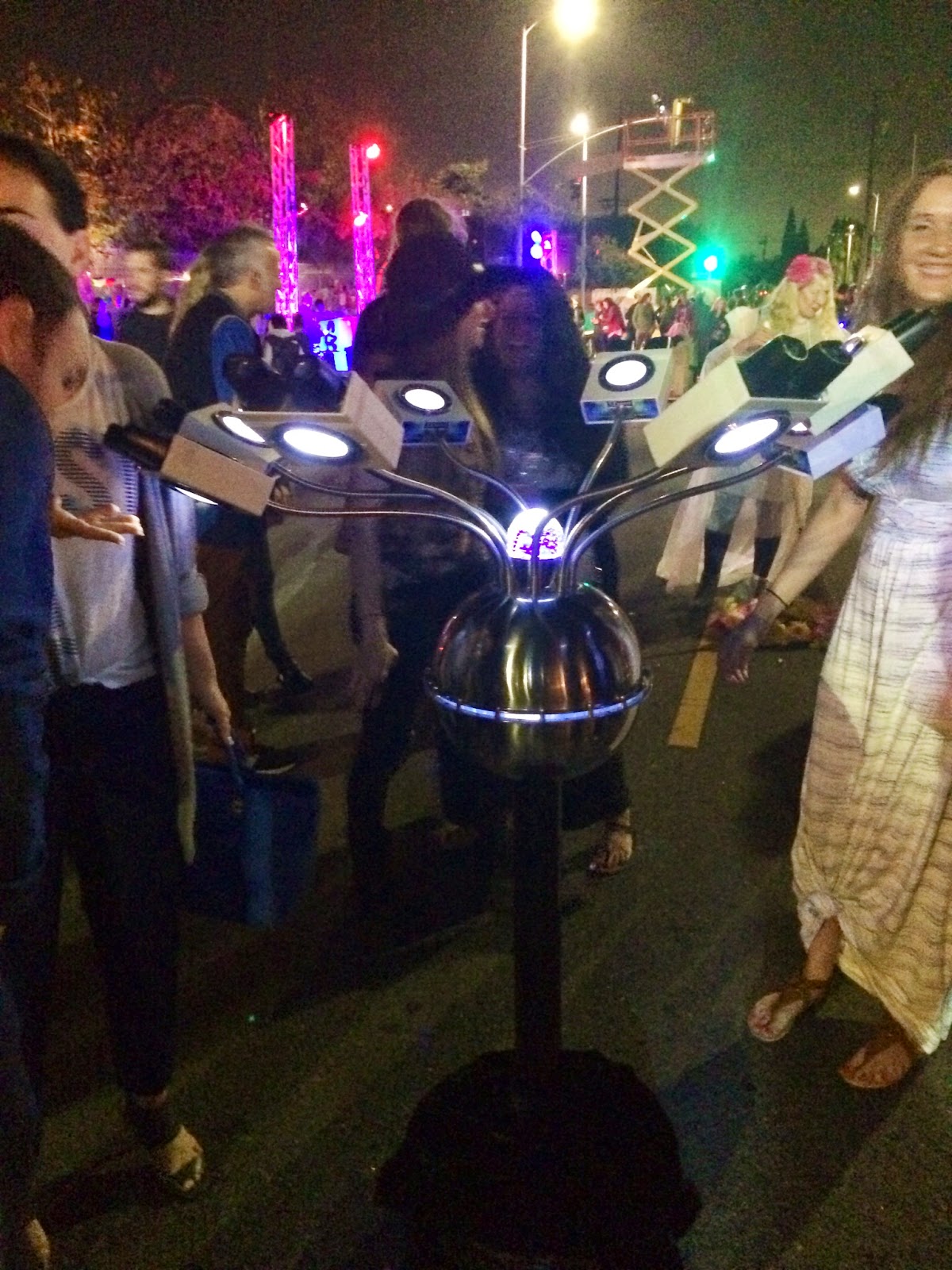 Kids also got into the act, with the Citizens of the World Westminster school fence, and some art being done among a bed of straw. 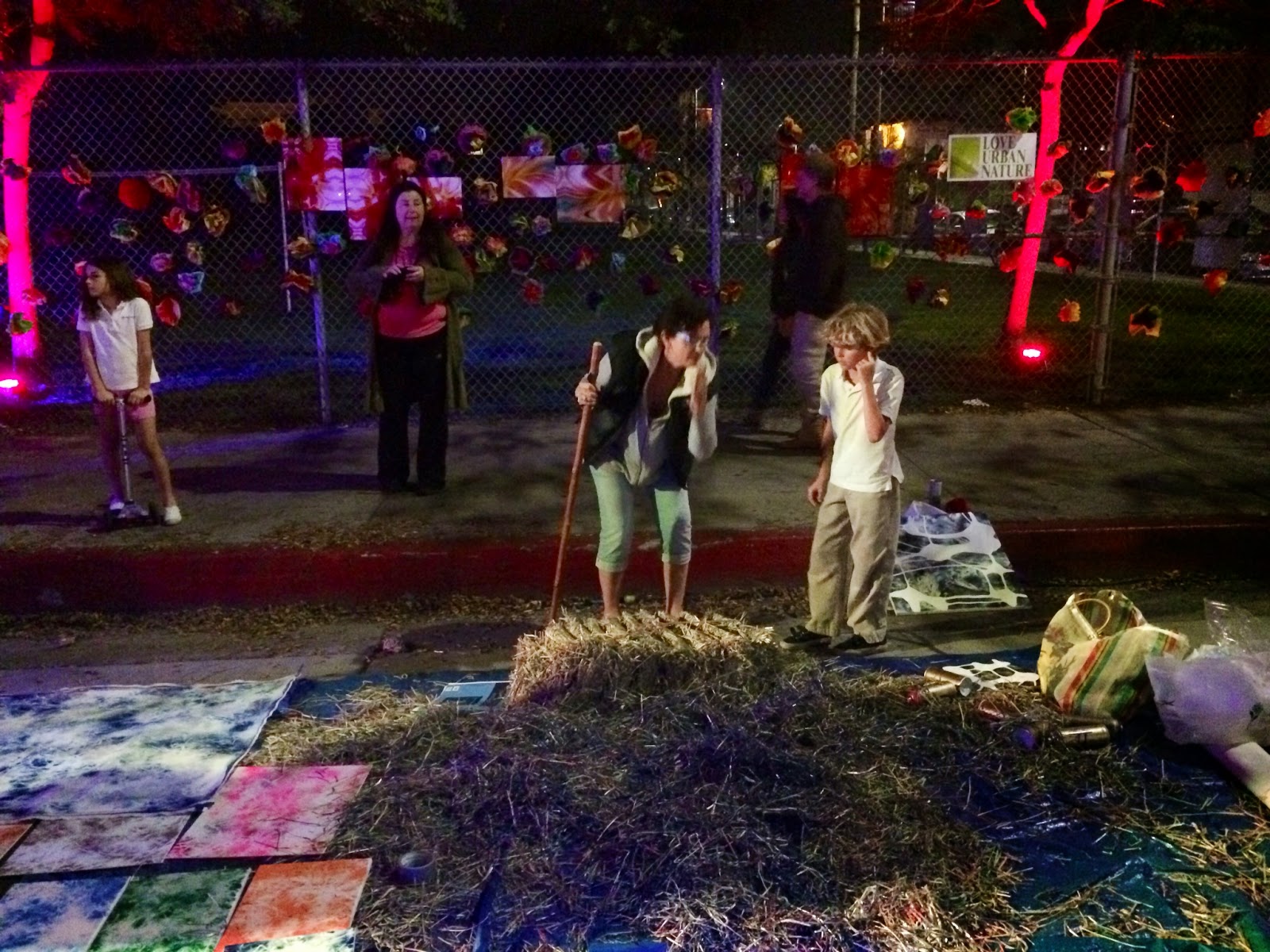 I zipped around the corner to take in the work of Mear One at the C.A.V.E. Gallery. One piece by this renowned street artist was cooler than the next, but I think this one was my favorite. 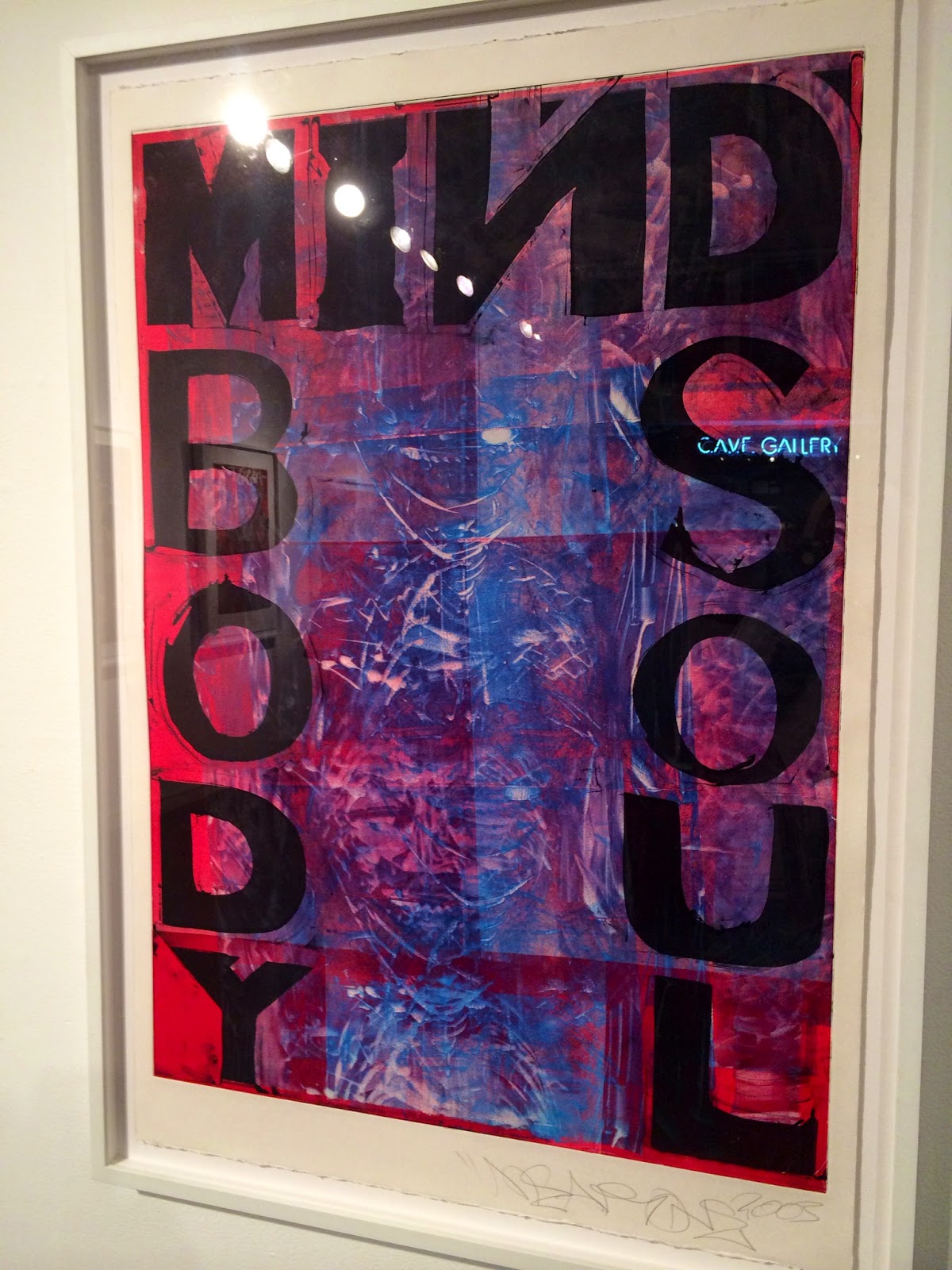 After thoroughly enjoying the "Spring Color Fun" theme on Westminster, there was still a lot of ground to cover, so we took off in search of the next coolest thing. We sped over to Hama Sushi to take in the gorgeous surf work in their "Making Waves" show. It was actually kind of a bust though, because the place was packed and the art was on the walls behind tables full of diners, so you couldn't get near enough to see it without feeling like a creeeper hovering over someone's table. But they looked pretty great at a distance. As did the Venice sign, all greened out for St. Patrick's Day (but it felt a little sad, like a discount table after the holiday does. Change it back fast!). 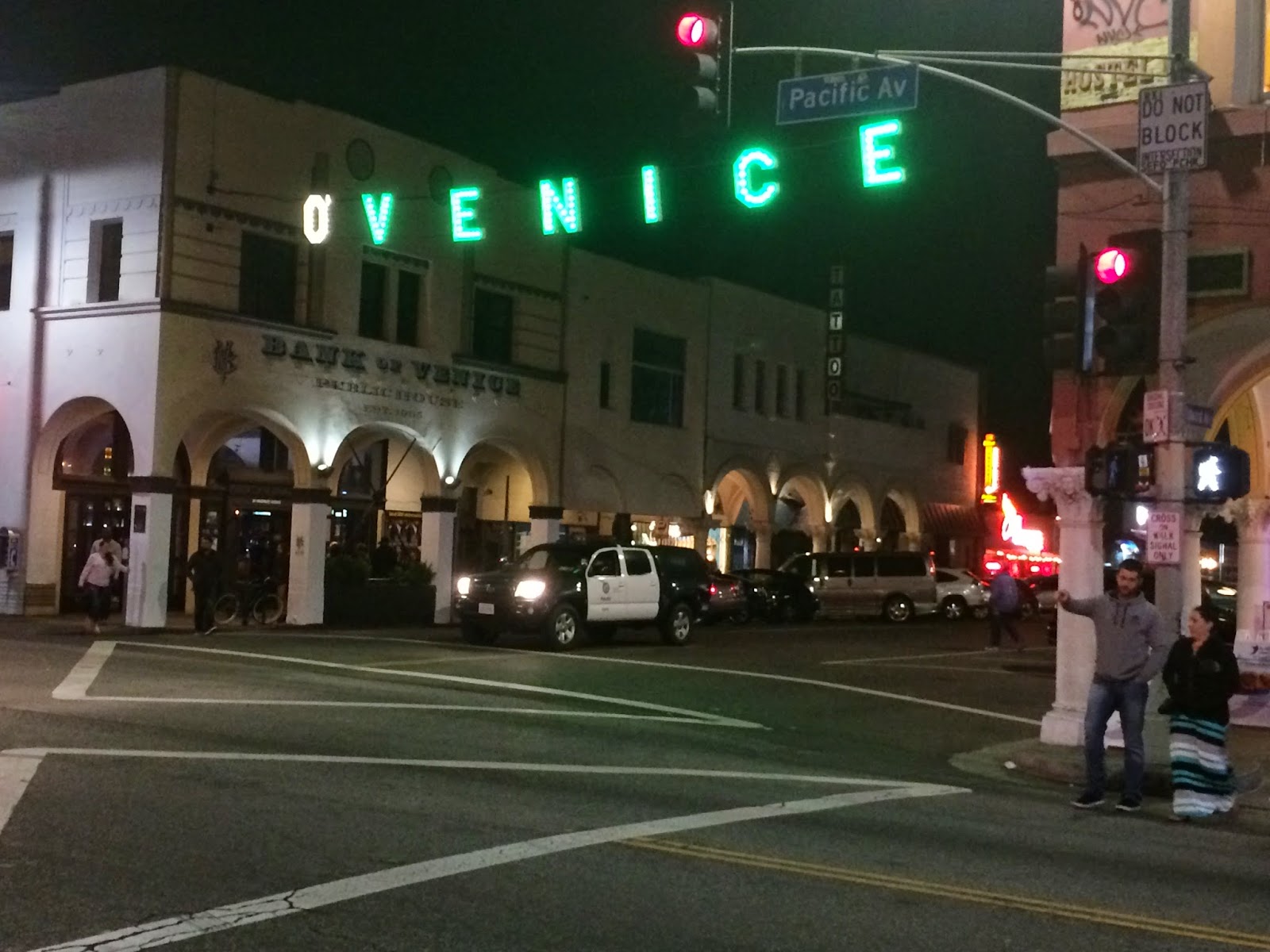 I met two girls I felt bad for outside, because they'd driven across town and were walking around the Crawl in heels. Things were so spread out - with no shuttles this time - that unless you had a bike, you just weren't going to see it all. Or even that much. My bike is actually wrecked at the moment, so all the stuff on the far ends of Rose and Washington just wasn't going to happen. Those girls were bummed. Sorry!

Though Gotta Have It wasn't included on the VAC map (which this time there seemed to be plenty of), so I almost didn't go, I'm glad I did, because as usual, it was one of my favorite stops. The art by Sophie Blazey and Courtney Coll was my runner up to the Viewfinders. Great collages featuring graceful nude women, that now I wished I'd bought one of, but didn't want to carry around. That's one of the flaws of art events - we need party lockers! 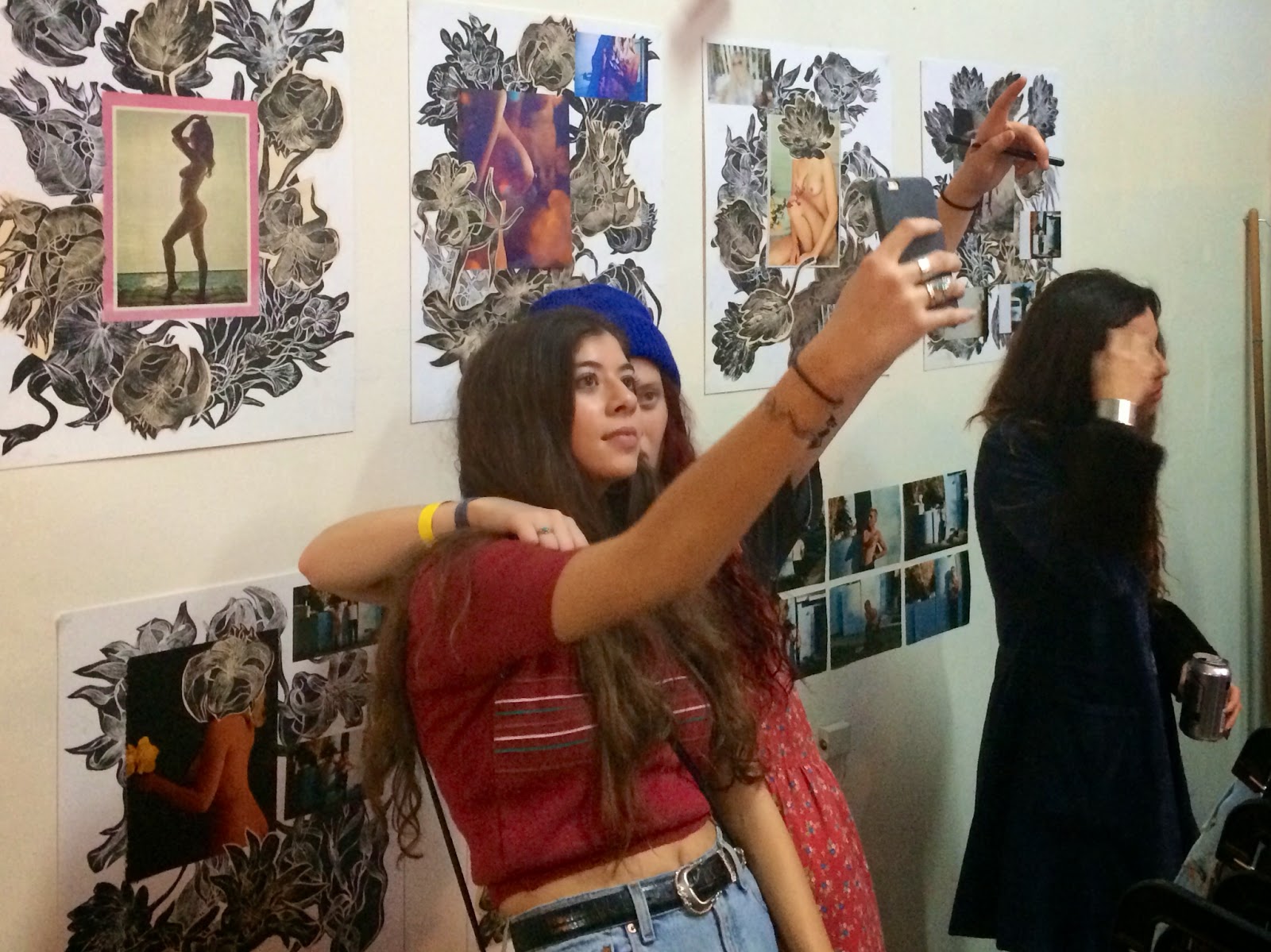 Windward and the Boardwalk both had a bunch of art, but now we were starving, and that meant Hal's. A quick bite before we raced over to the old Samy's building on Venice Boulevard to catch the closing party of the week long Verve exhibit. 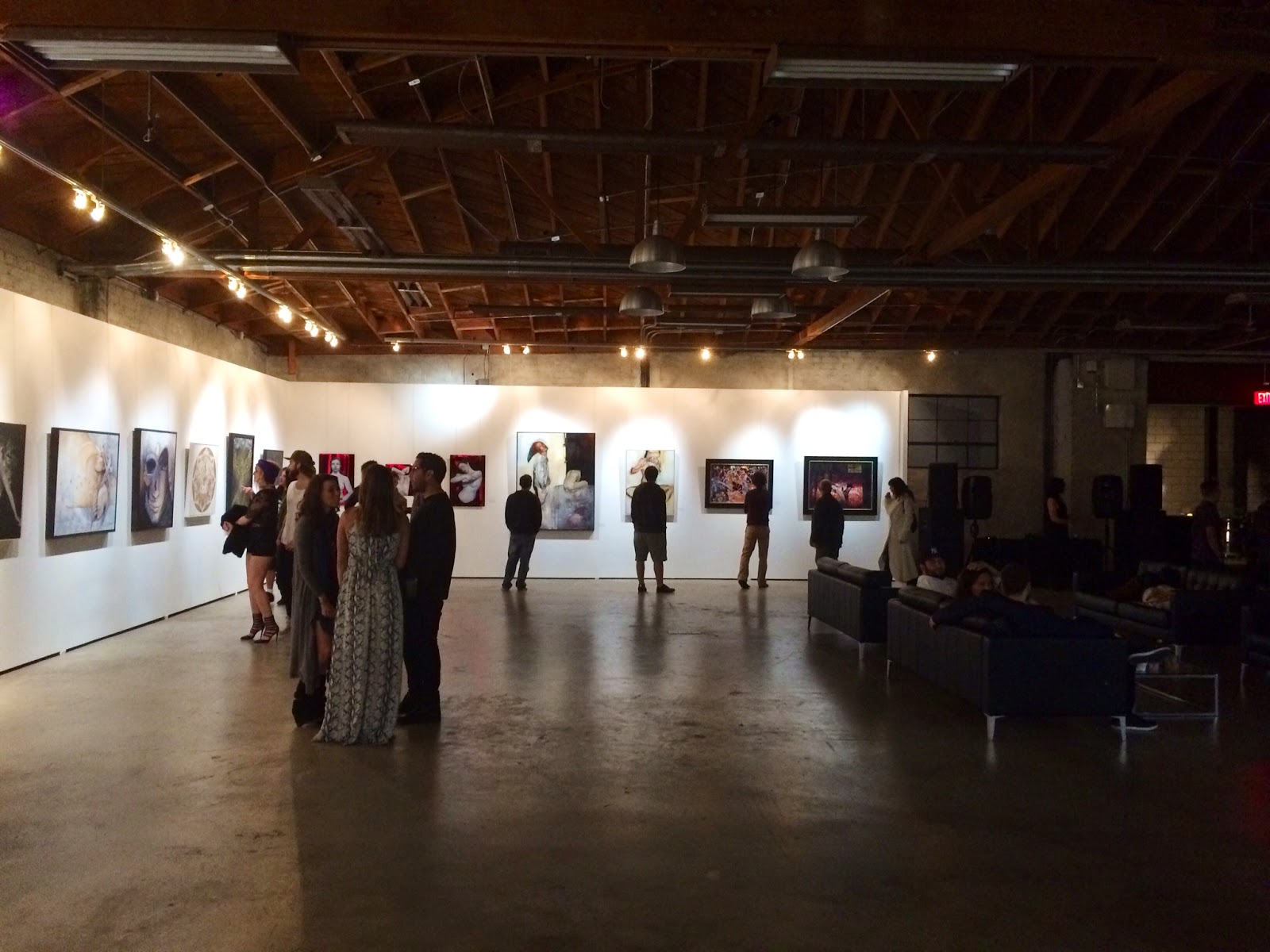 The cavernous space was full of art and art aficionados. There were lounge areas, drink areas, and plenty of good people watching. Though I really can't stand the things, there did seem to be a lot of fun and photographing over at the Spirit Animal hood station. Goofy. And once again, immersive. 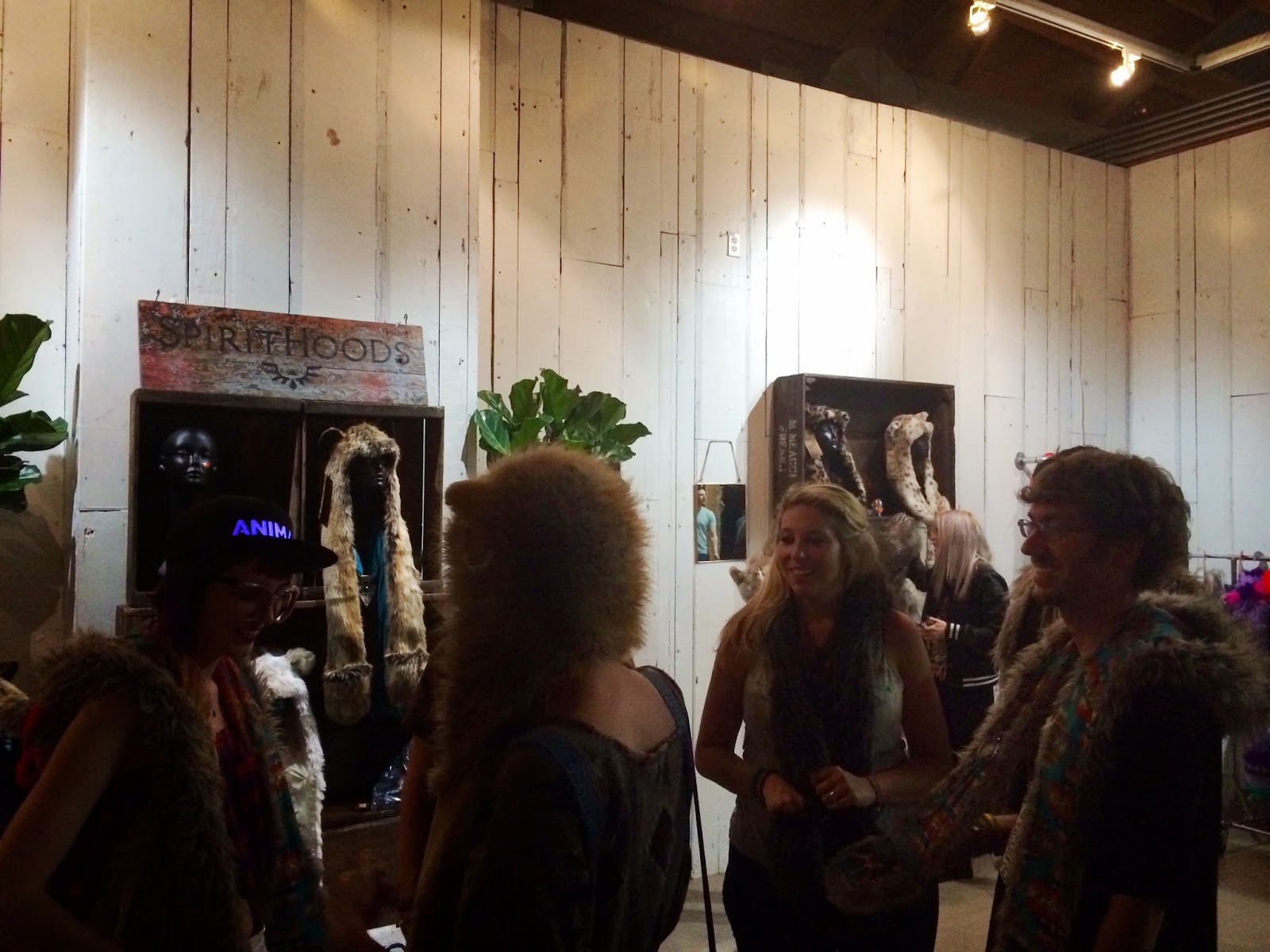 As the Spring Fling Art Crawl, came to a close, Amy Kaps and The Brutal Blondes cleaned up their flowers, and another installment of one of our community's very best events was complete. 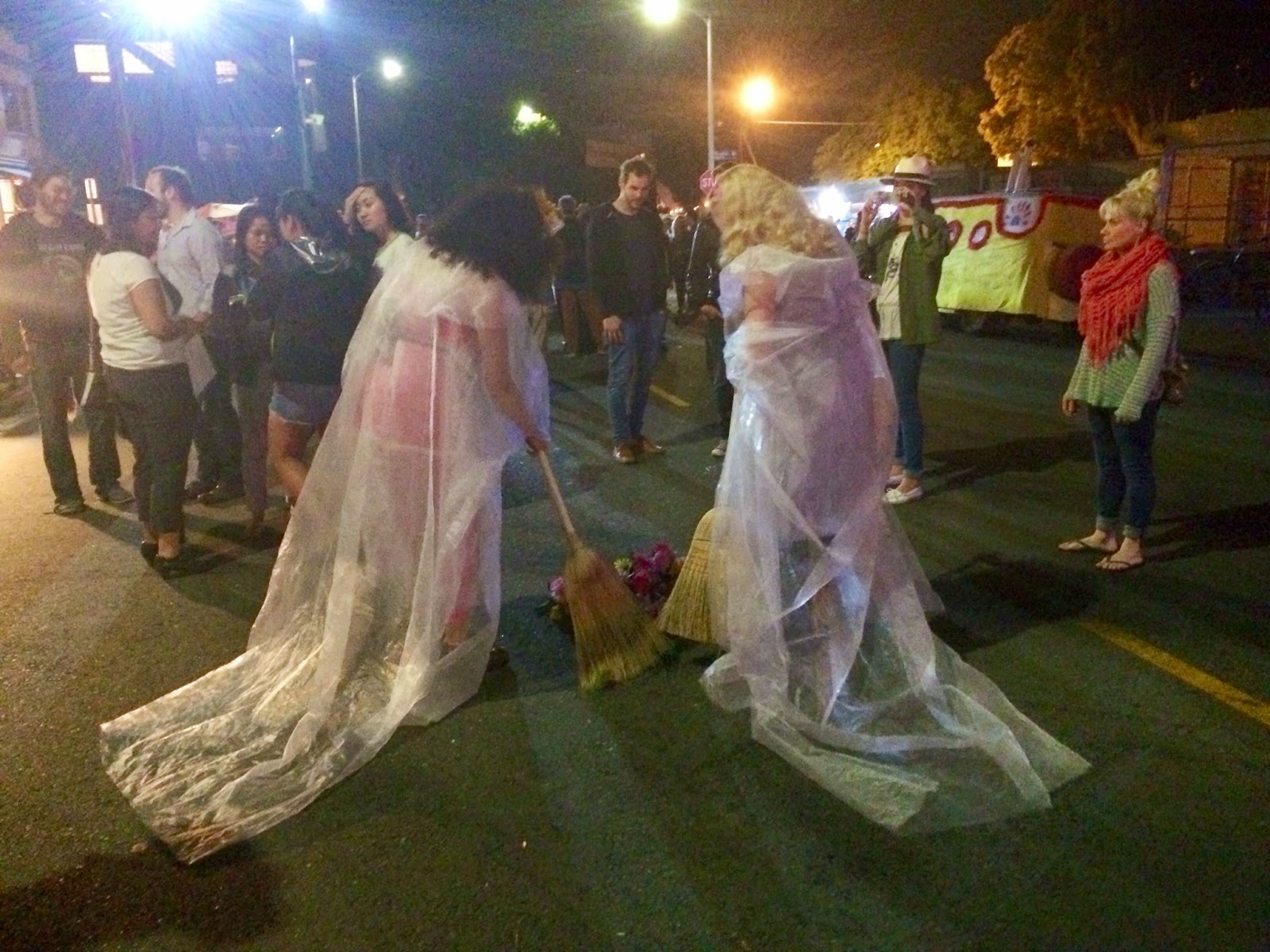 People split off to the various after parties or to hit one of the surrounding watering holes. Walking home from the VAC later, I breathed in the heady perfume of the Spring blossoming ... and already started looking forward to the next one.


*Sorry to any art and artists we missed. On foot!