Sometimes you just have to get away from it all, and in California, about the most extreme place you can do that is in Death Valley National Park. I've been wanting to check that place out ever since I moved here, and when I read that there might be a wildflower "Super Bloom" this Spring, plans were finally made. Well, they weren't really made at all ... we just got in the car and went for the weekend. 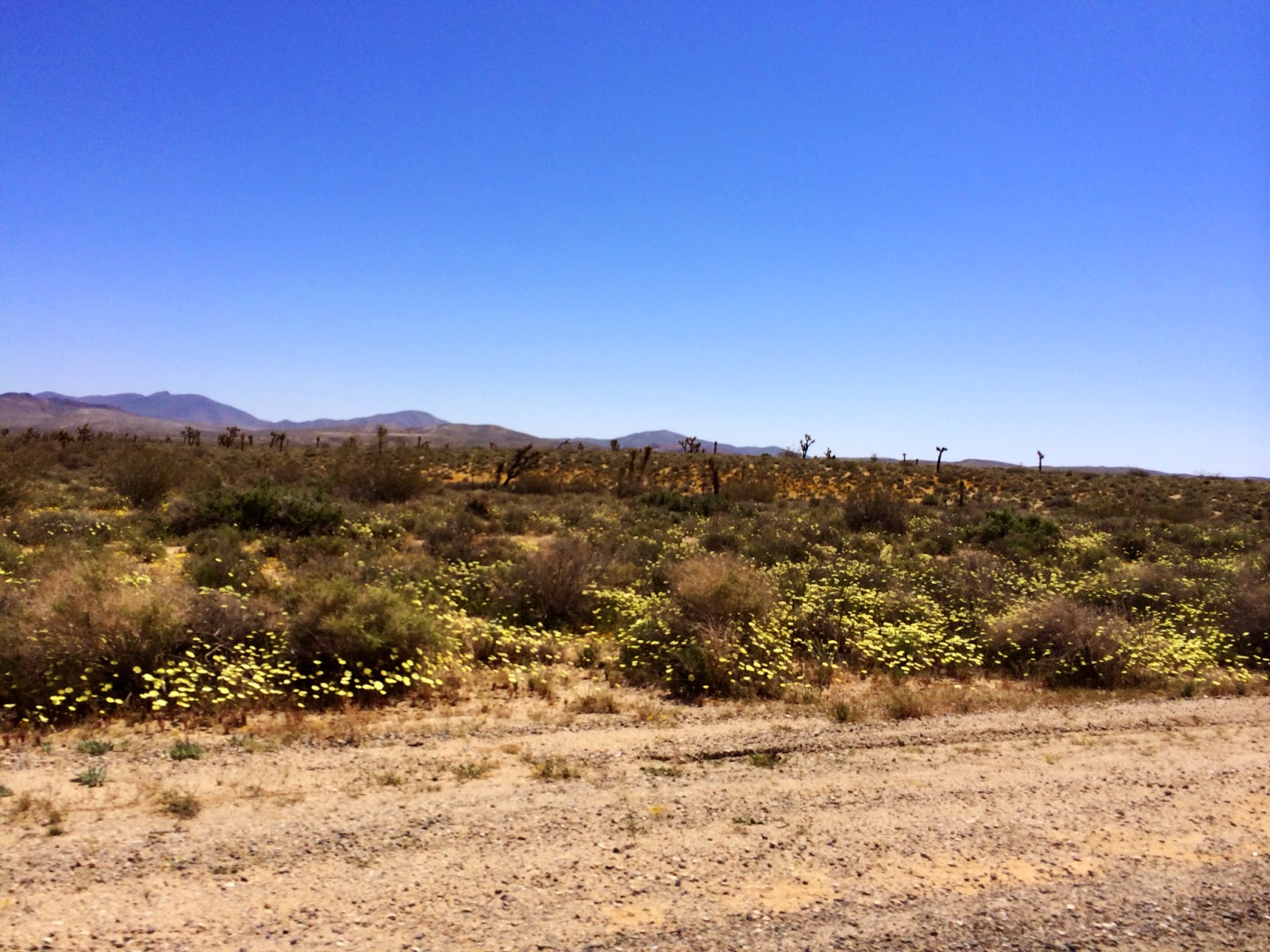 The drive is pretty fast, about four hours from L.A. It gets increasingly hot as you go, and scrubbier and drier. We started to see some wildflowers along the sides of the road, and I started to get that excitement you get when you're almost at a place you've never seen before. 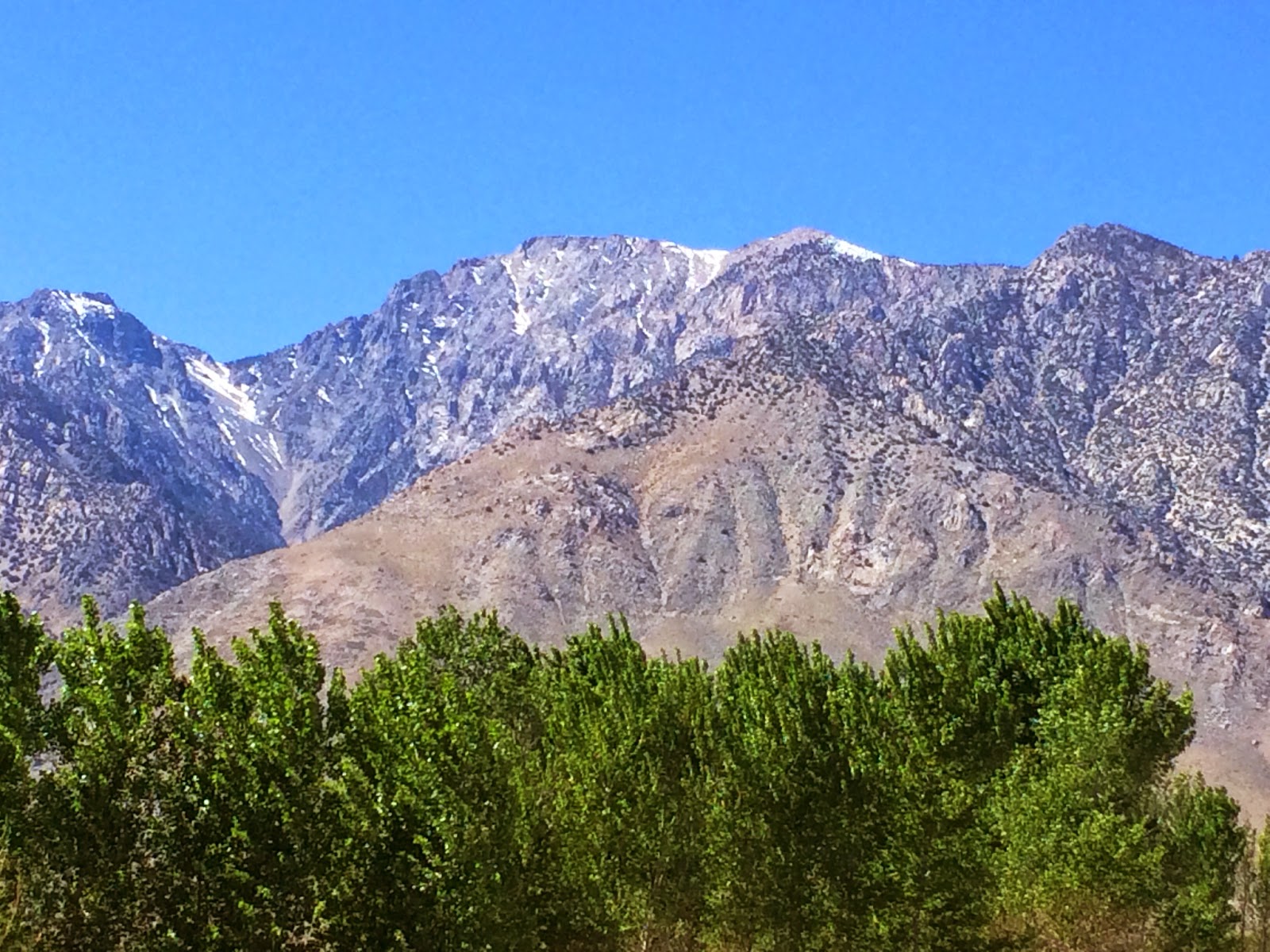 Death Valley is far more dramatic than I'd pictured, and a lot more mountainous. The Valley itself is in between mountain ranges that trap the heat in there, making it the hottest place on Earth at times (the high temperature ever recorded was 134, and they're very proud of that). It's gnarly. 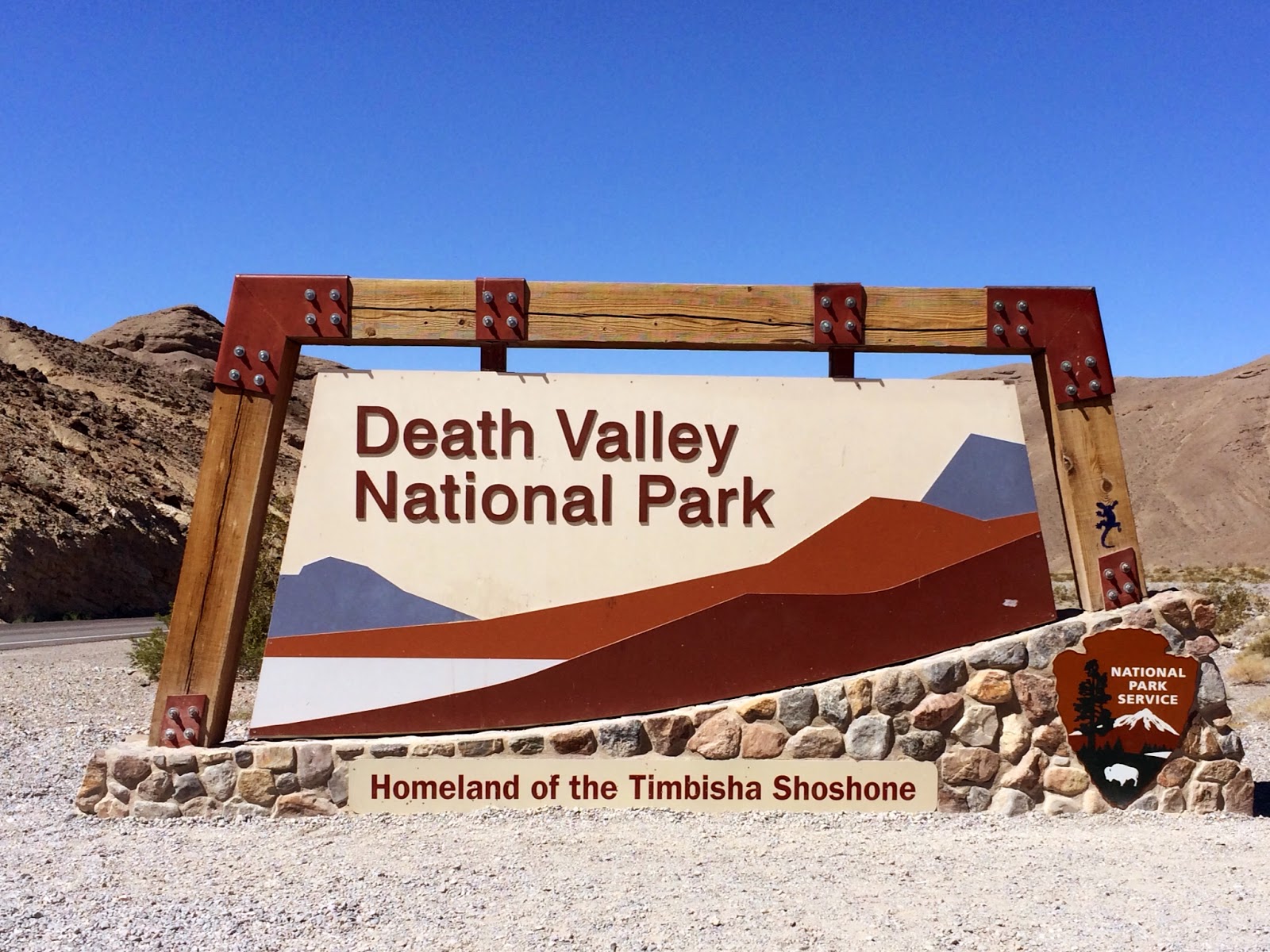 We arrived in the HUGE park in the early afternoon, and immediately set out to see as much as we could. There were surreal landscapes in every direction, but as we had only two days, we opted to look for flowers first, and the park's greatest hits second. 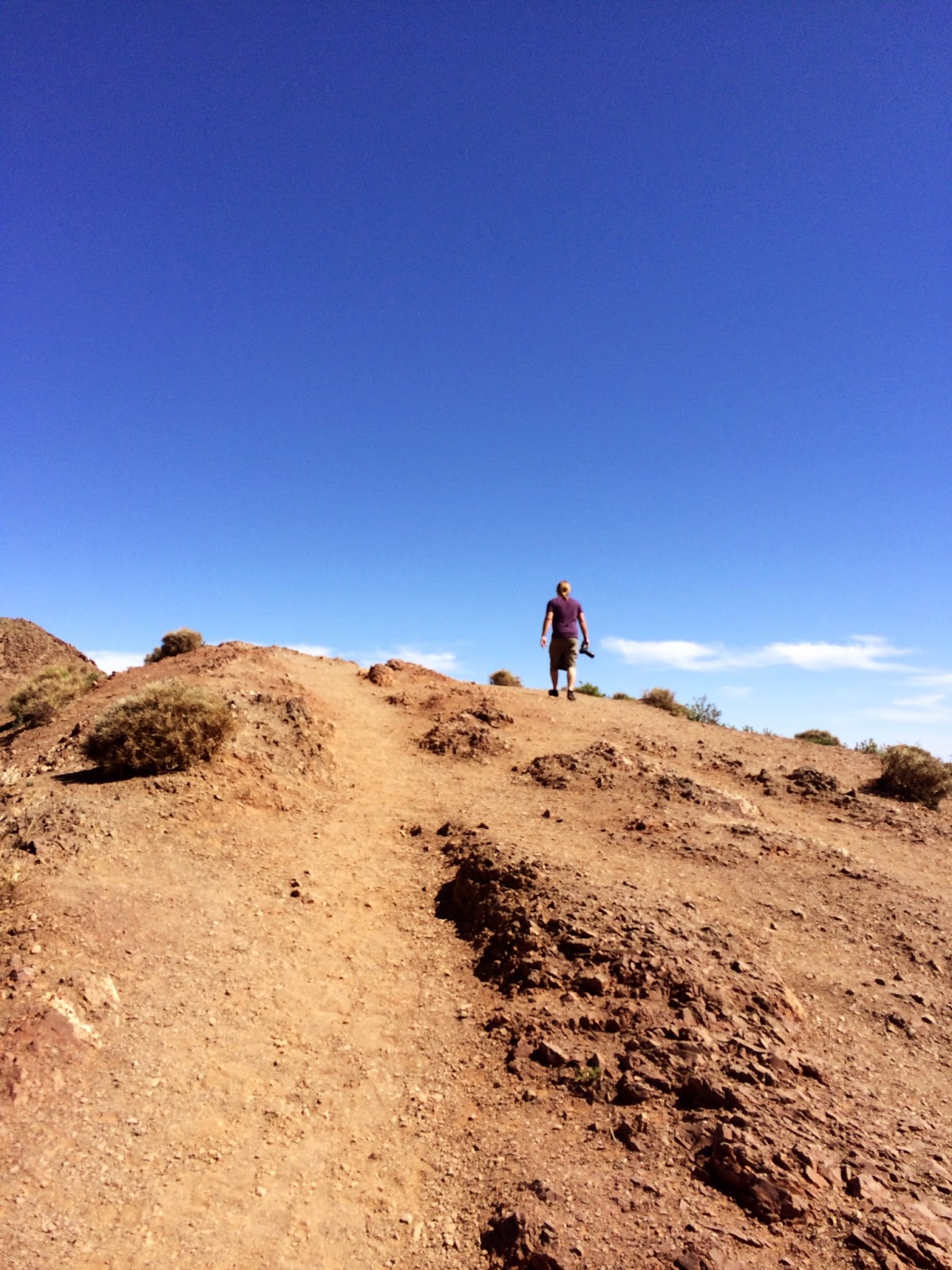 There is a wildflower hotline that had said the day before that it was blankets of blooms like the person had never seen. The thing with Death Valley though is that it's so hot that everything changes every day. The superbloom of the day before had already shriveled up from the heat in one day. We saw exactly one hot pink cactus flower bush in the entire park. 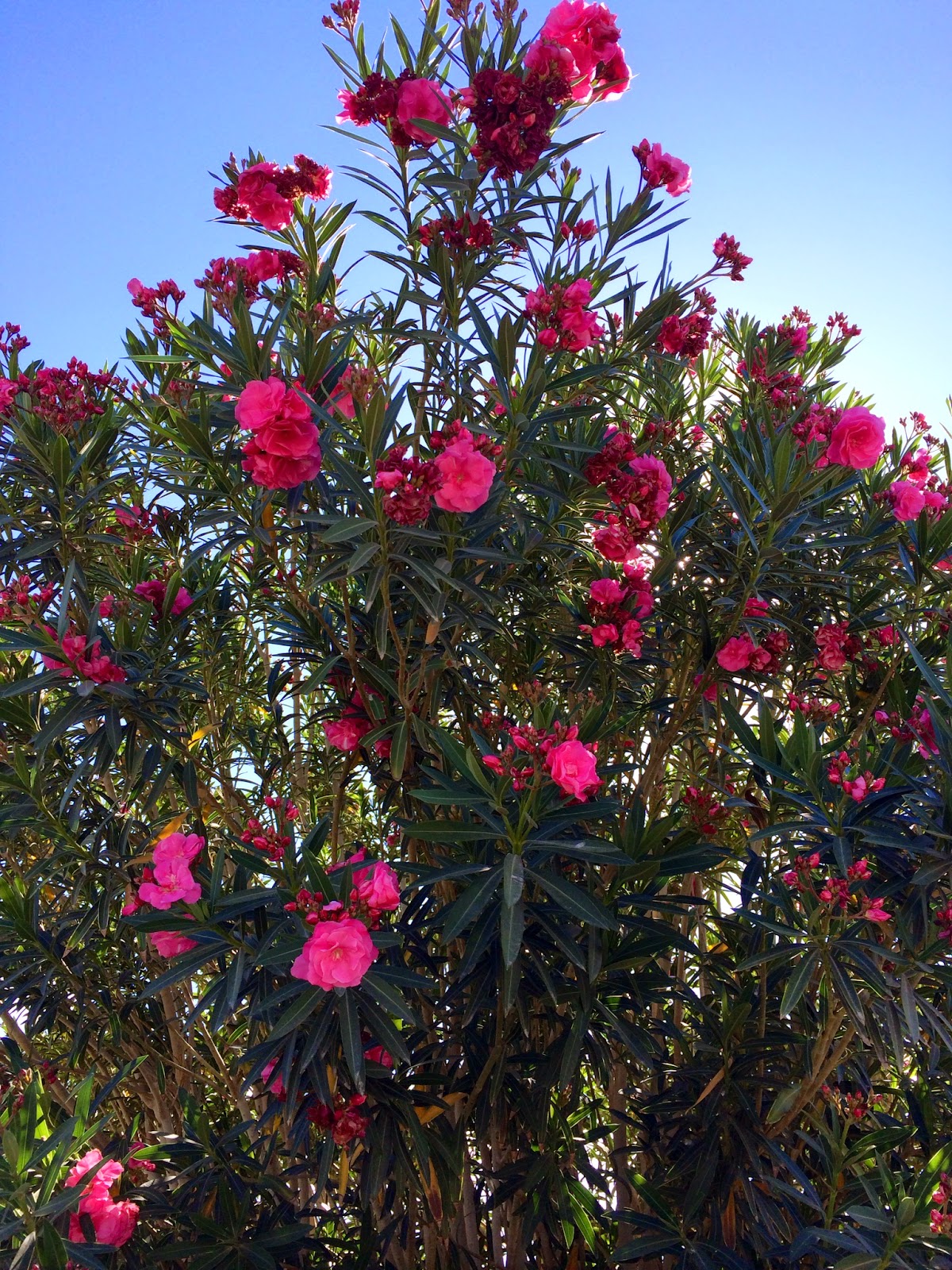 With everything so spread out (like hours and miles between some landmarks), you have to use your time wisely. The information center lady told us what the coolest things were and where we were most likely to see flowers, and that's where we went. The rocks and mountains are multi-hued, as different minerals make up the landscape. You'll see red, green, pink, yellow in the stone, and one scenic drive is even called the Artist's Palette, as it resembles exactly that in the right sunlight. 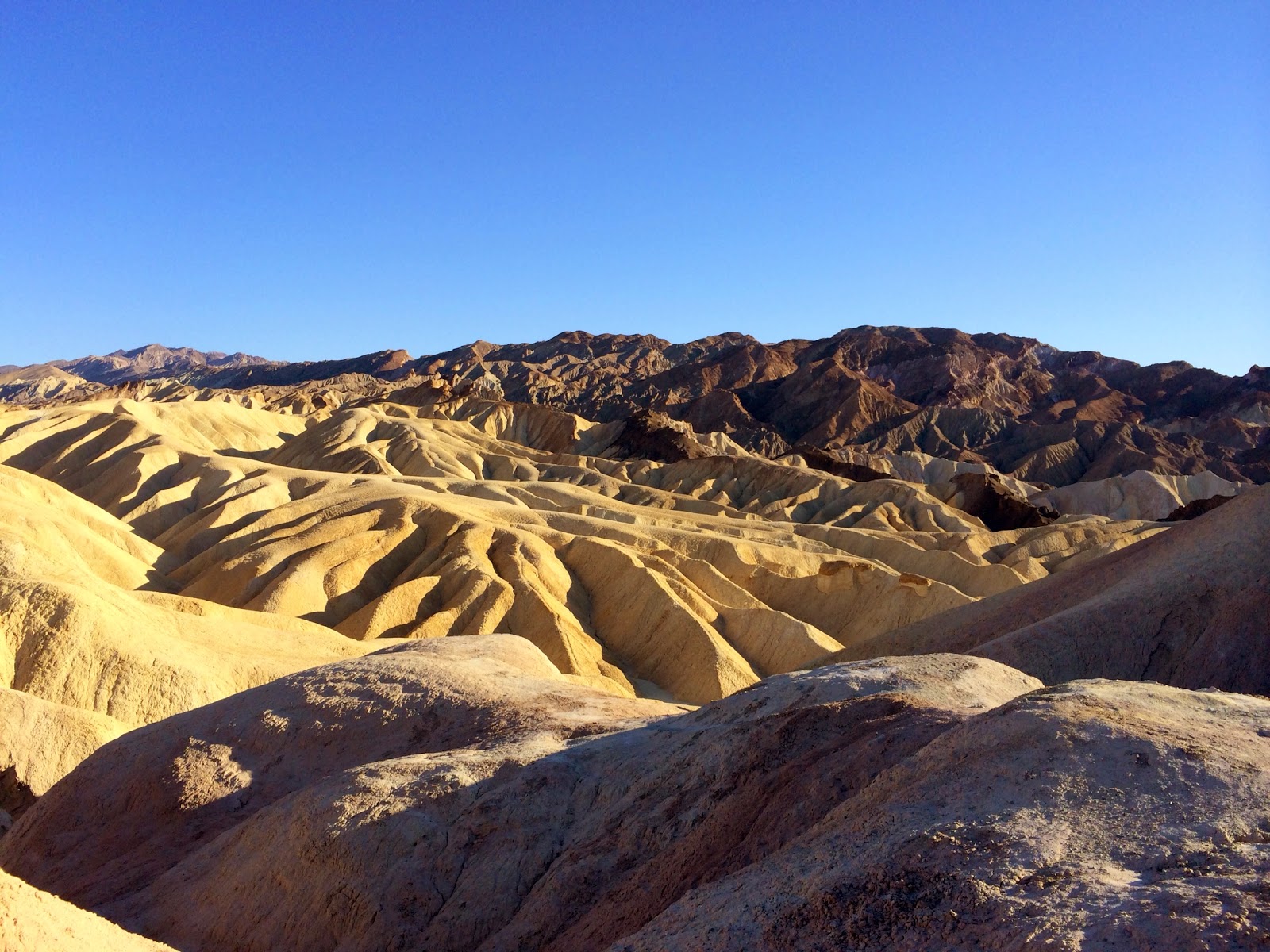 It's harsh conditions in Death Valley. Very rough terrain and the ridiculous heat make it an excursion for at least the somewhat hardcore. I'd like to think that's me, but even I was reduced to tears at the end of the day, so bad was my head pounding from total heat exhaustion. 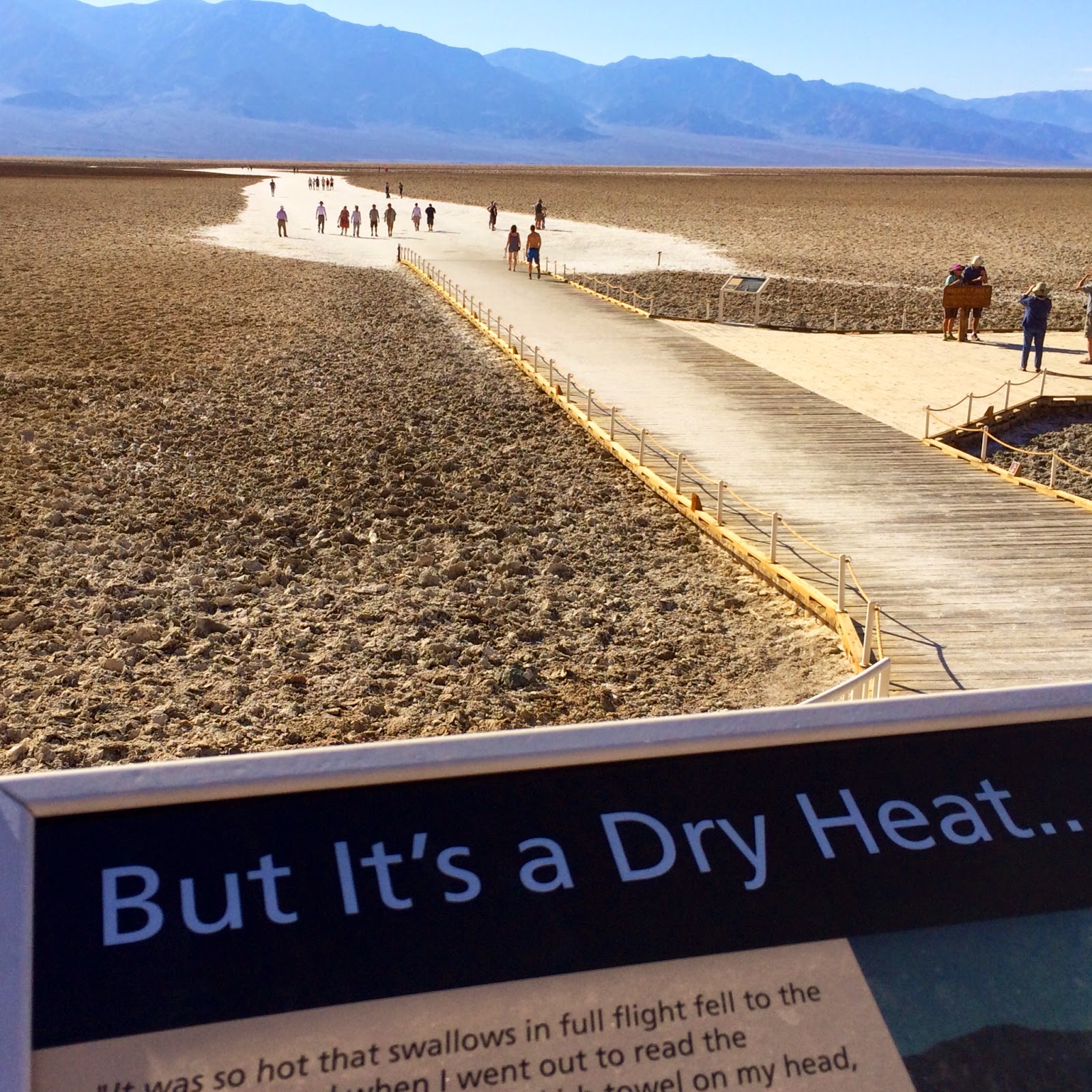 The heat is seriously heavy metal, and not to be taken lightly at all. All the streets and sights are named for things related to Hell, and that's pretty apt. But an awfully beautiful hell. 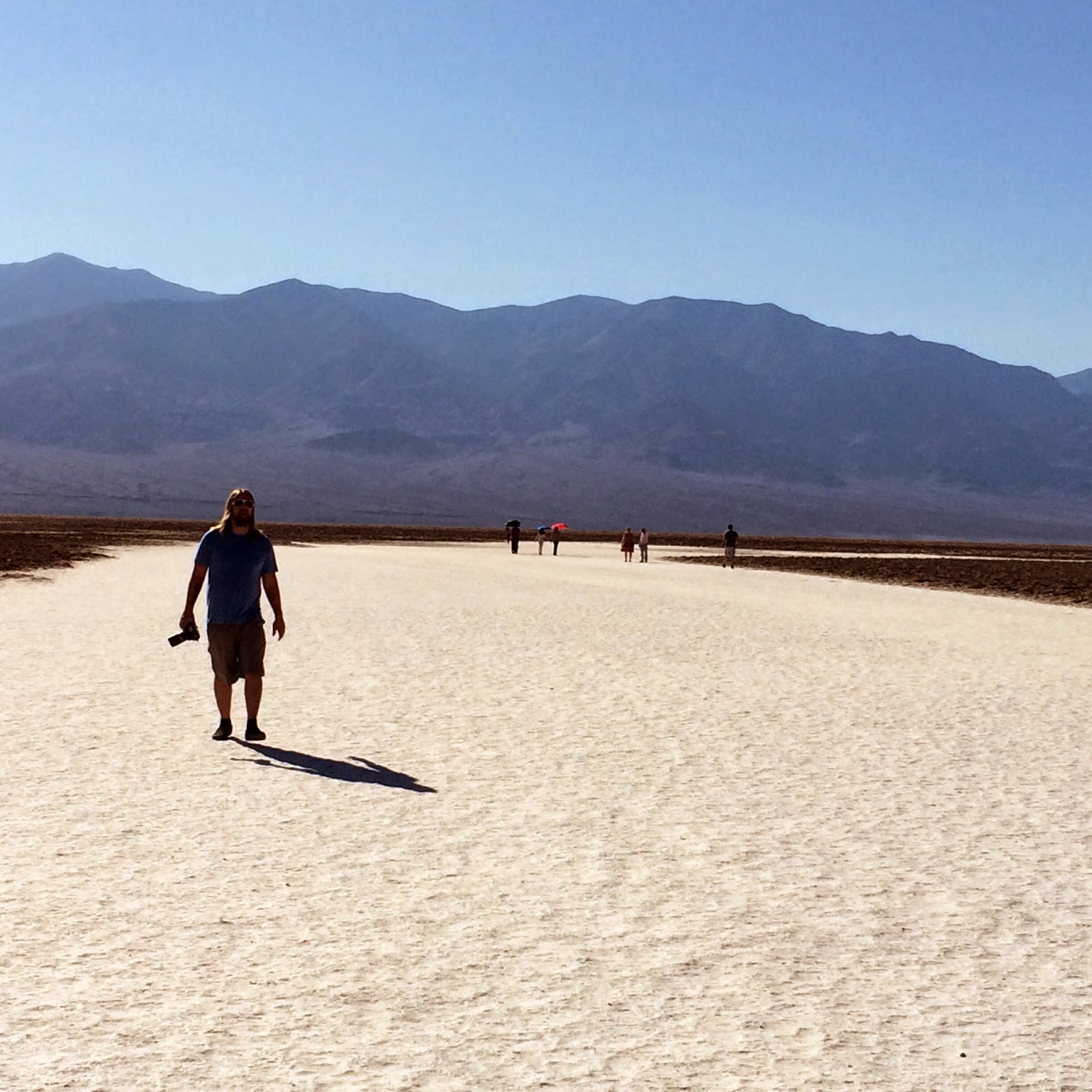 Badwater Basin is the lowest point in the U.S. It is probably also the hottest. This is where I started to wilt. It's a giant salt basin, and you can feel your lips and skin chapping as you stand there. In the photo below, Paul was being honest, I was faking it. 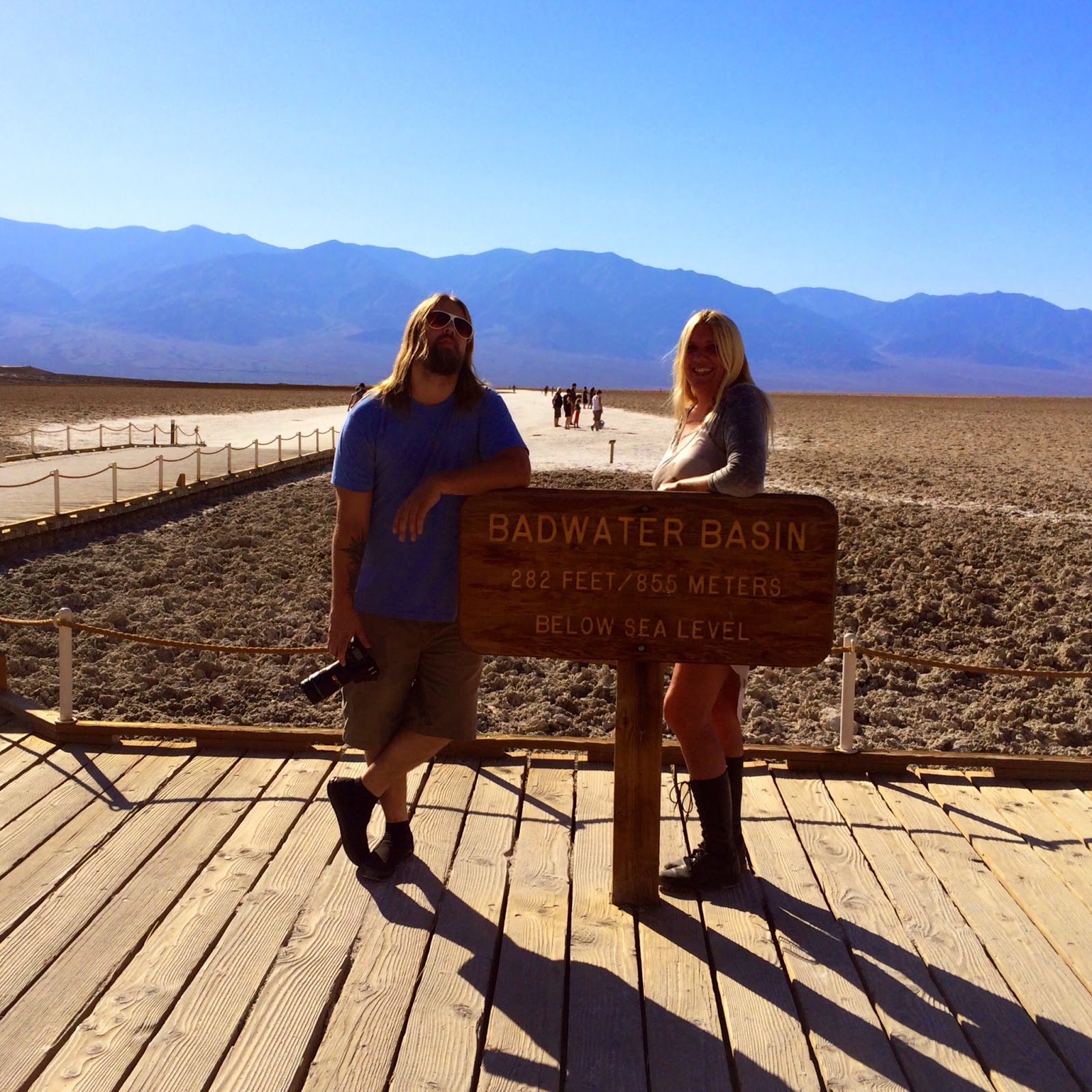 When you turn around and look up, you can see "Sea Level" painted hundreds of feet above you. You're now under the sea, in a total Land Of The Lost environment. The fact that ANYTHING can live there is a serious miracle. 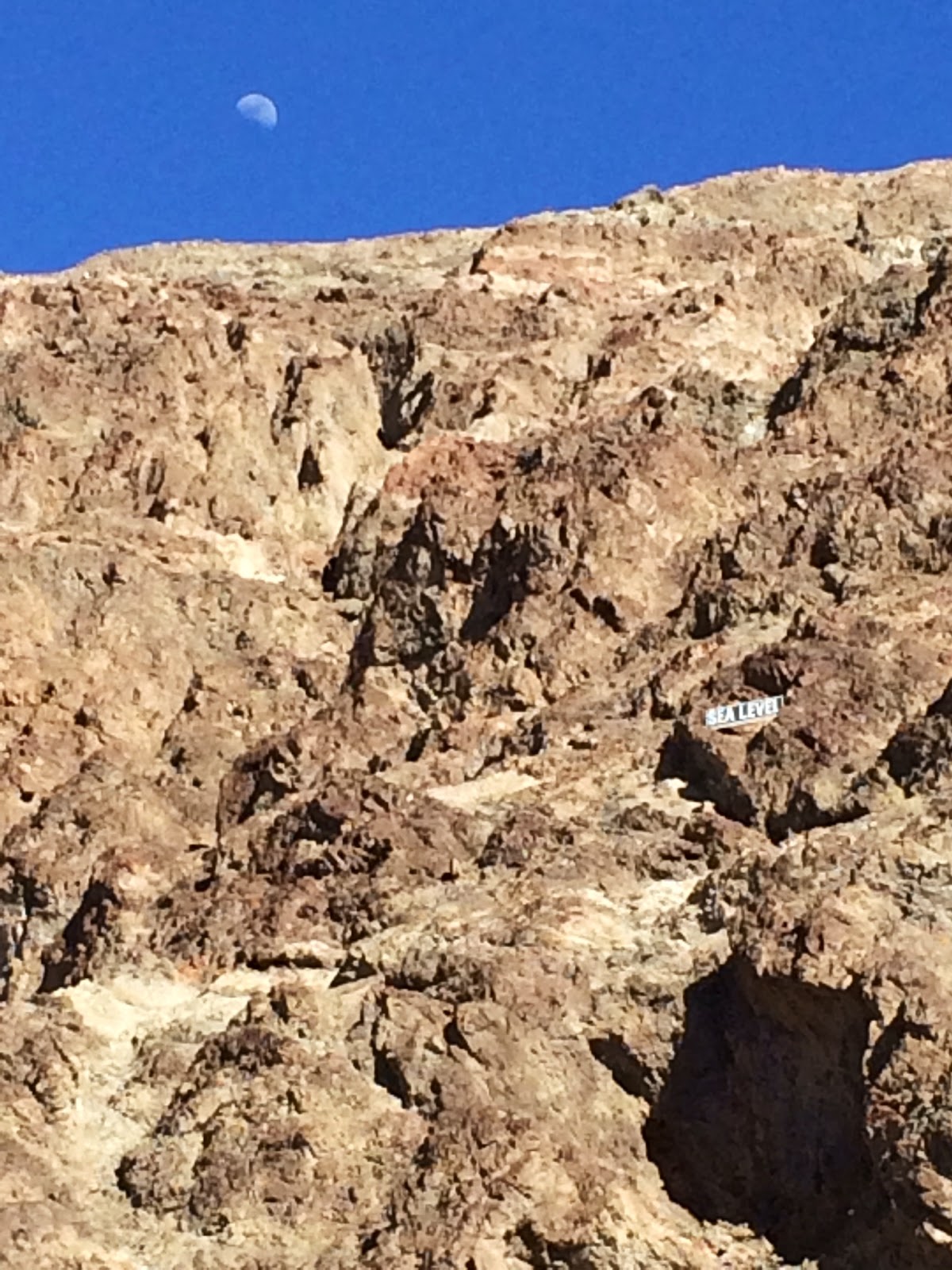 But things do. Little lizards, mountain goats, caterpillars, scorpions, snakes, spiders, hawks ... and those elusive flowers we were looking for. 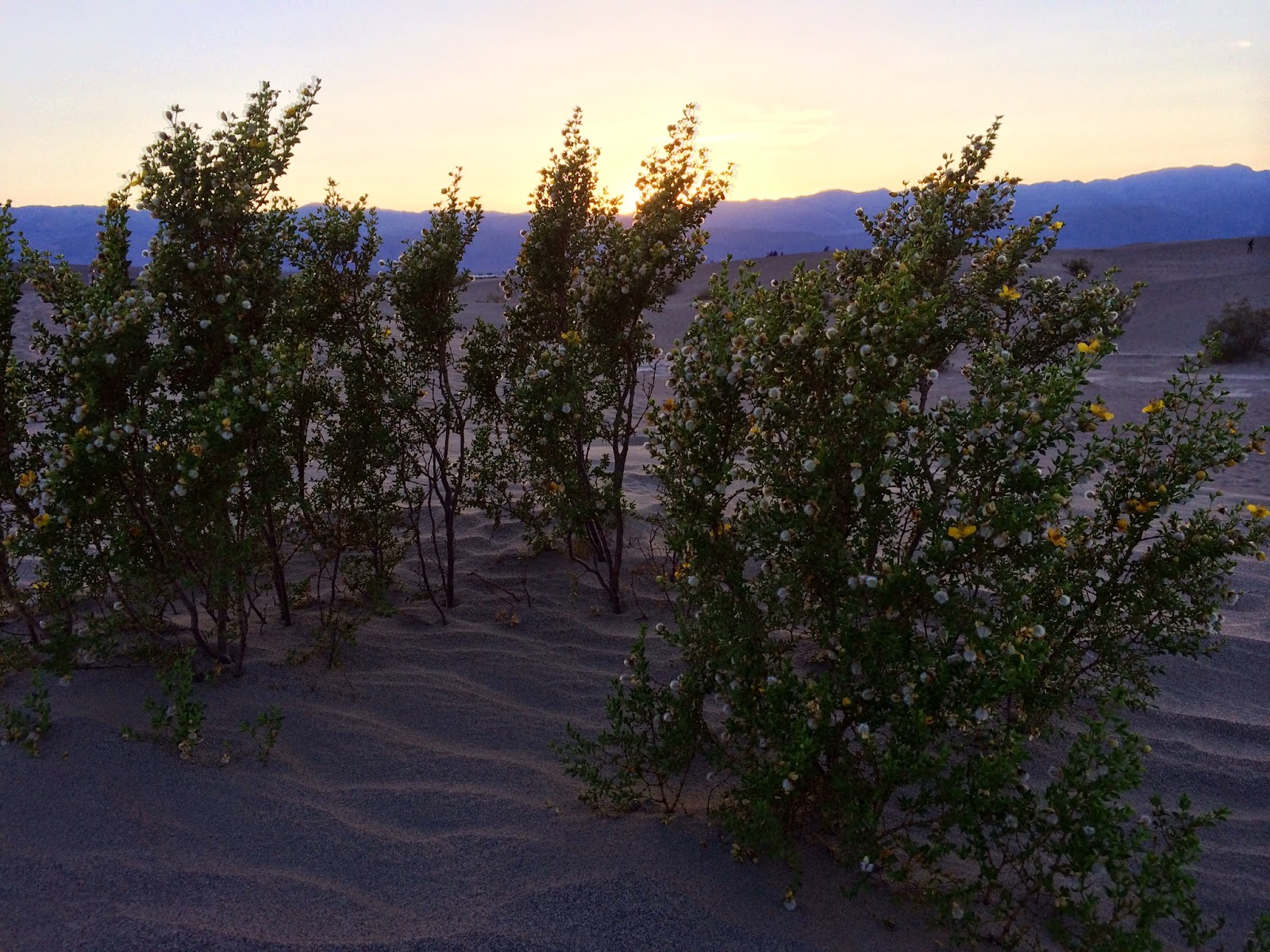 A true highlight of the trip was running around in the sand dunes. They're real, rolling sand dunes, and someone told me some of Star Wars was shot there. 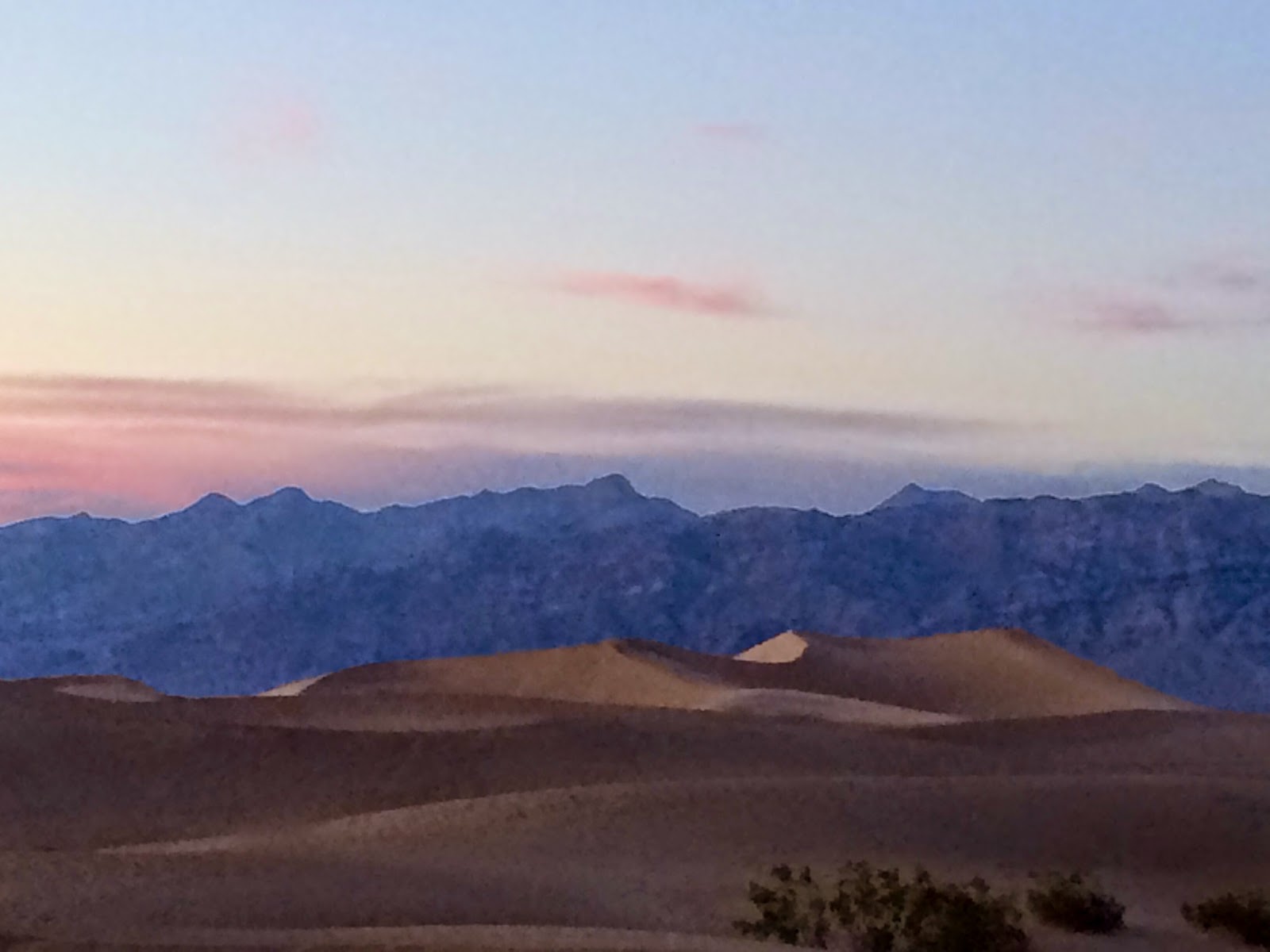 I believe it, because Sand People are about the only people that it would make sense to be there. We watched sunset and moonrise there, and it was out of this world. Purple mountain's majesty in full effect. 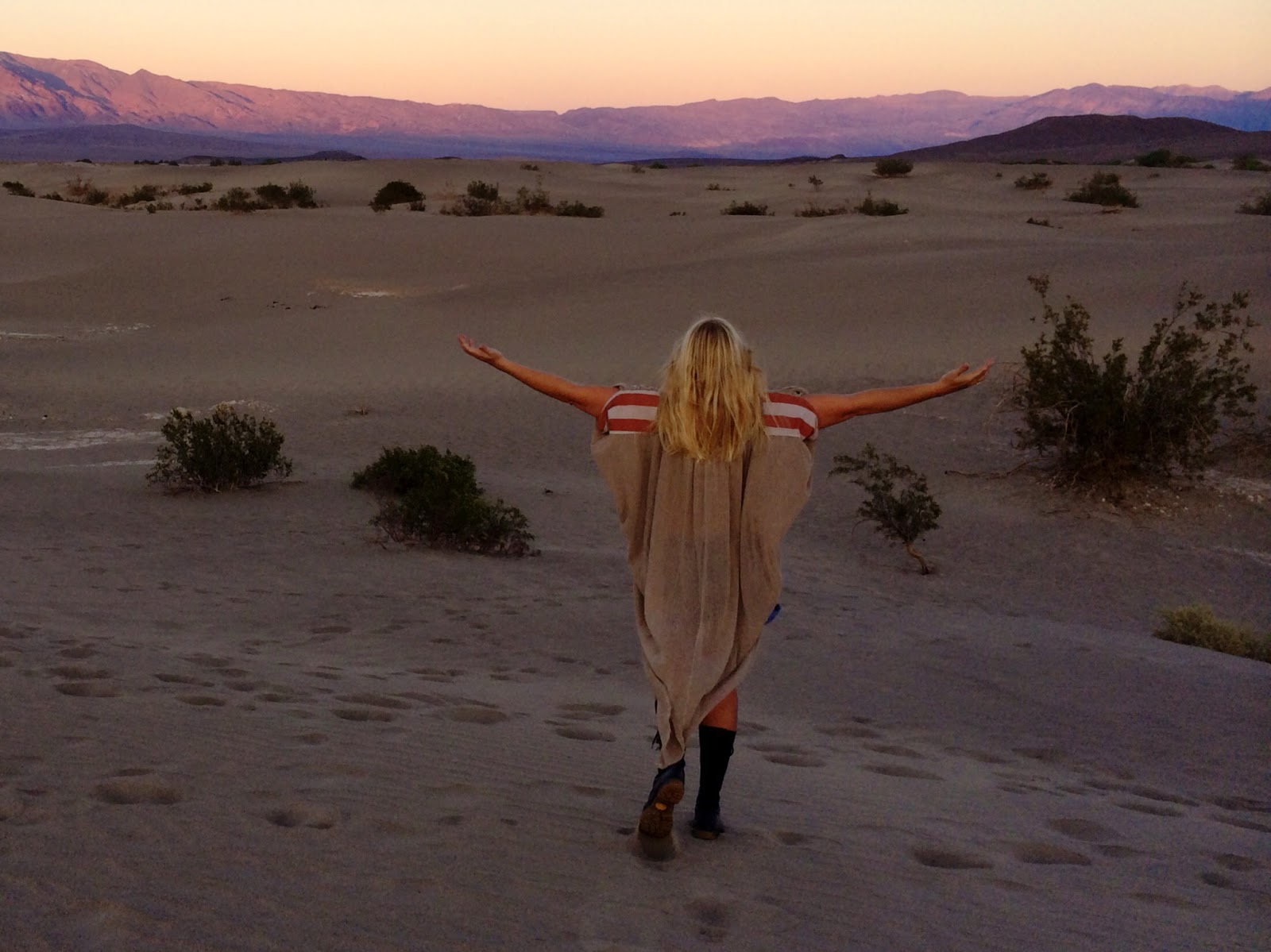 We stopped in the village of Stovepipe Wells to get supplies and ask about lodging. As a slew of bikers (both spandex and Harley) came through for the weekend, there were absolutely no rooms at the inn. Anywhere. 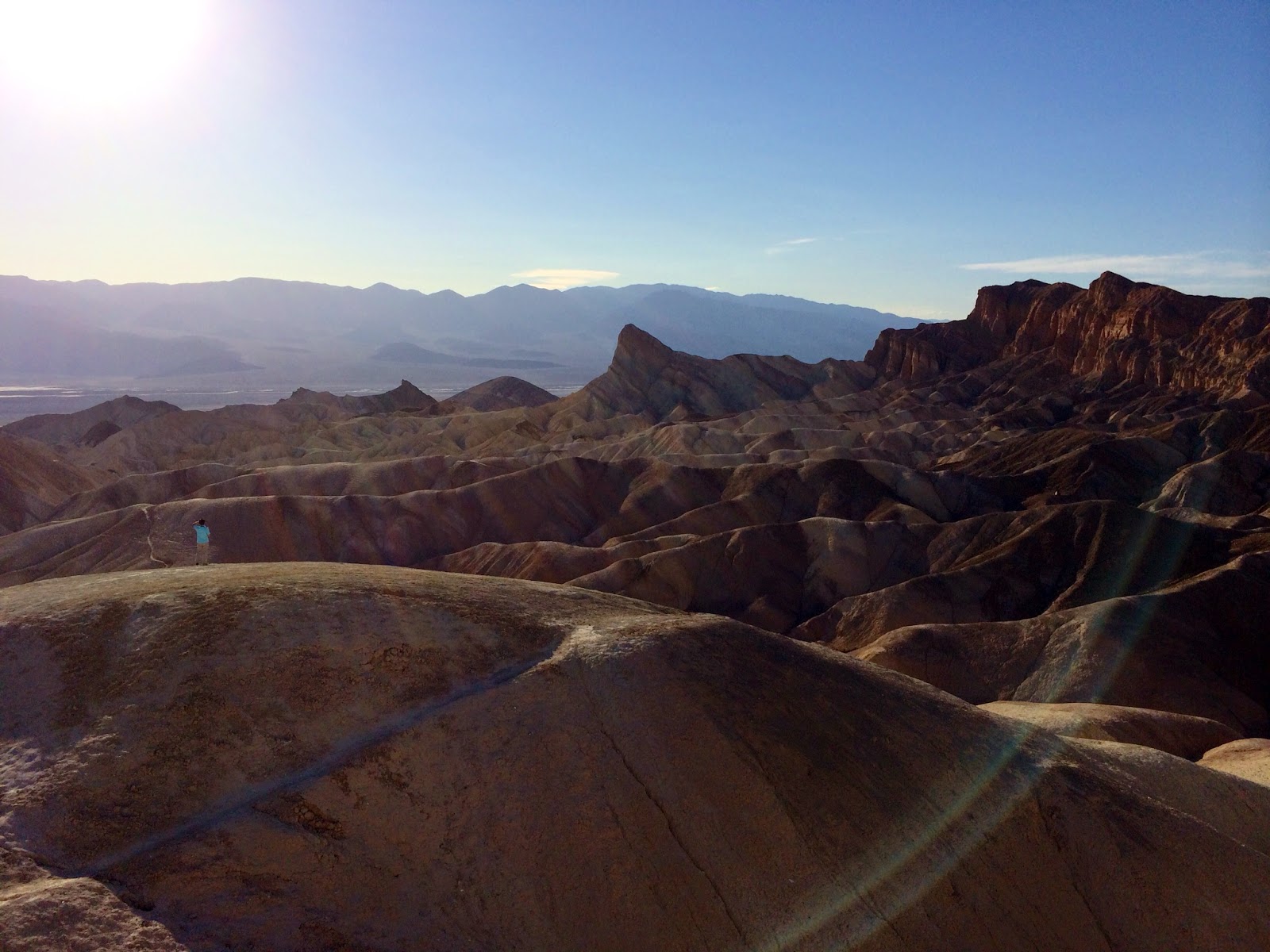 We ate an exhausted and marginal meal at the town bar, and geared up to drive another two hours back out of the park to find a bed to sleep (and recover) in. I thought I'd ask one more time before we left, and sure enough, someone was a no-show, and the nicest, cleanest, most welcomed bed was mine at the Furnace Creek Ranch, right there in the heart of the Valley. Praise Jah. 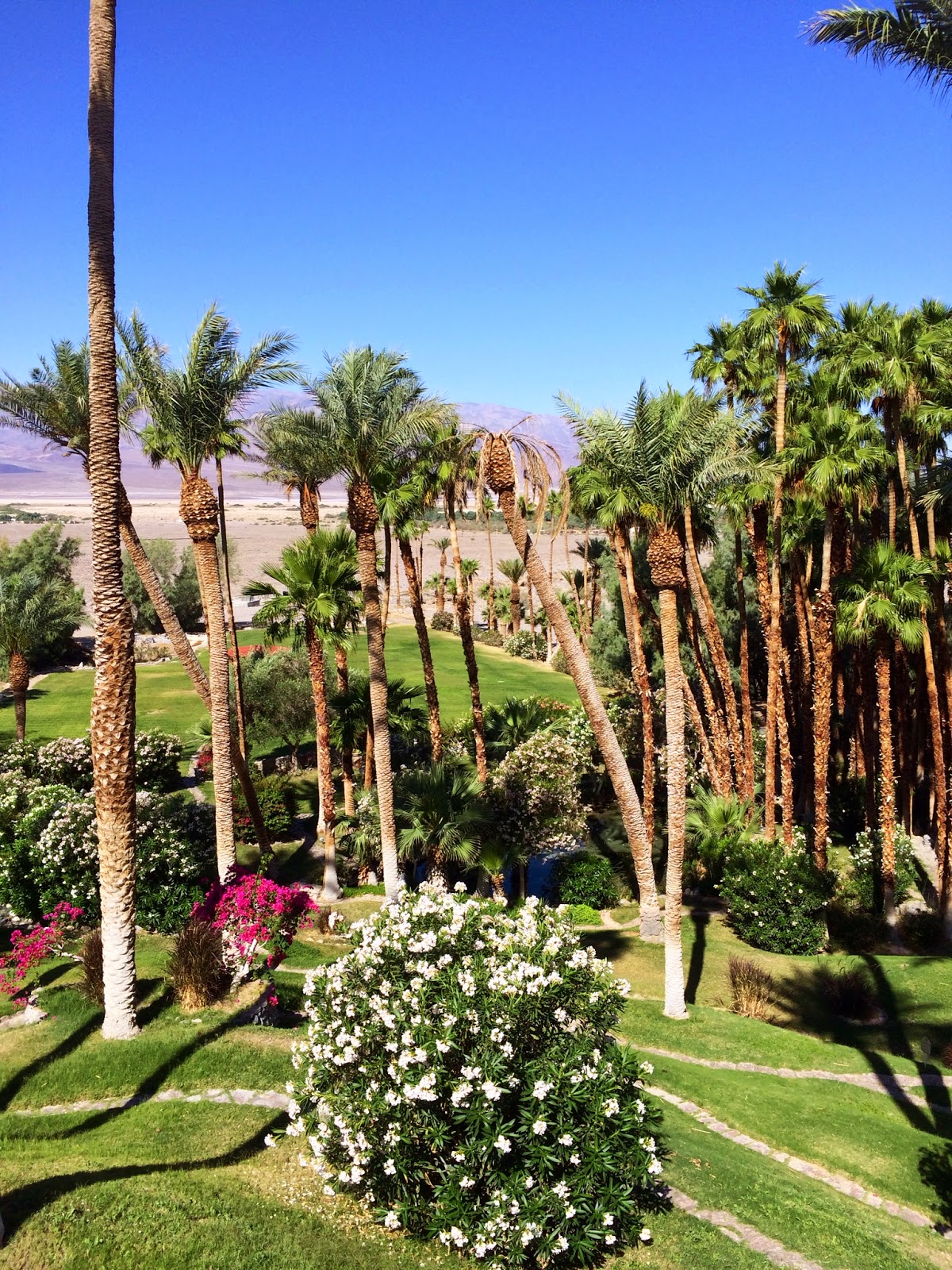 After being a dusty, sweaty mess for the entire day, the pool was about the happiest place on Earth. Floating on my back in water that was the same temperature as the air, looking up at the billions of low hanging stars and bright moon, it was like being suspended in the womb of the Universe. It was an out of body and deeply within my body sensation all at once. I was saying all weekend that the theme of the weekend was rebirth - I'd meant that mentally, but in this pool, it also felt physical. Spring is the rebirth of the planet too, but where most places it's rebirth from the dead of Winter. Here, it's life before the death of Summer, when the sun burns everything to a crisp. Trippy. Plus it's Easter time. Rebirth, Life, Death ... Timely. 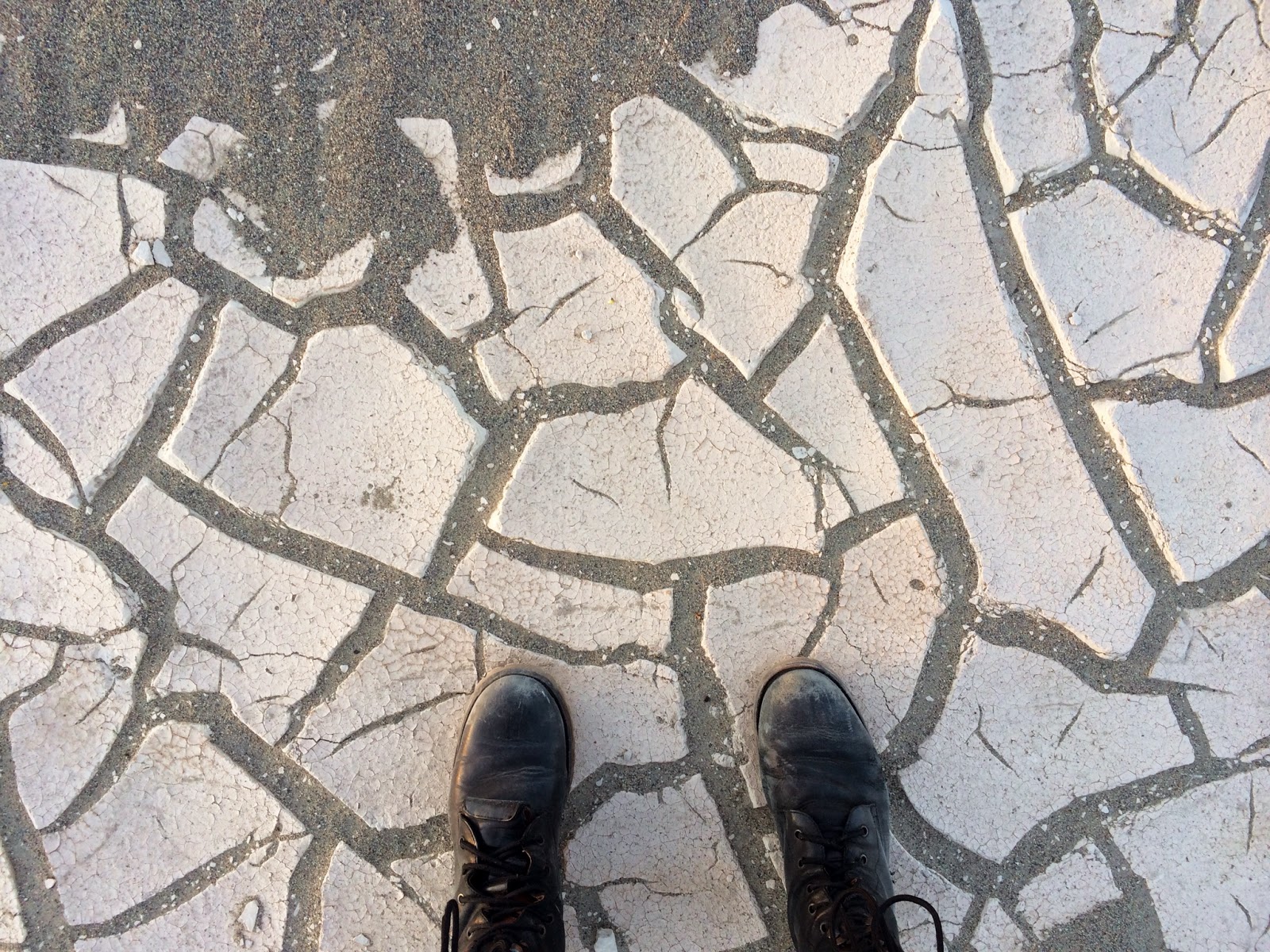 We set the alarm to get up at 3:30 am to see the stars after the moon had set. The only place I've ever seen the stars better was at the top of Mauna Kea in Hawai'i. After a brief panic attack thinking our car would get stuck on this old mining road and I'd die in my pajamas and flip flops (dumb idea), I laid back on the hood of the car and watched the stars dance and shoot across the sky. It was magic ... until fatigue and the thought of another full day of heat in a few hours sent us back to our cool beds. 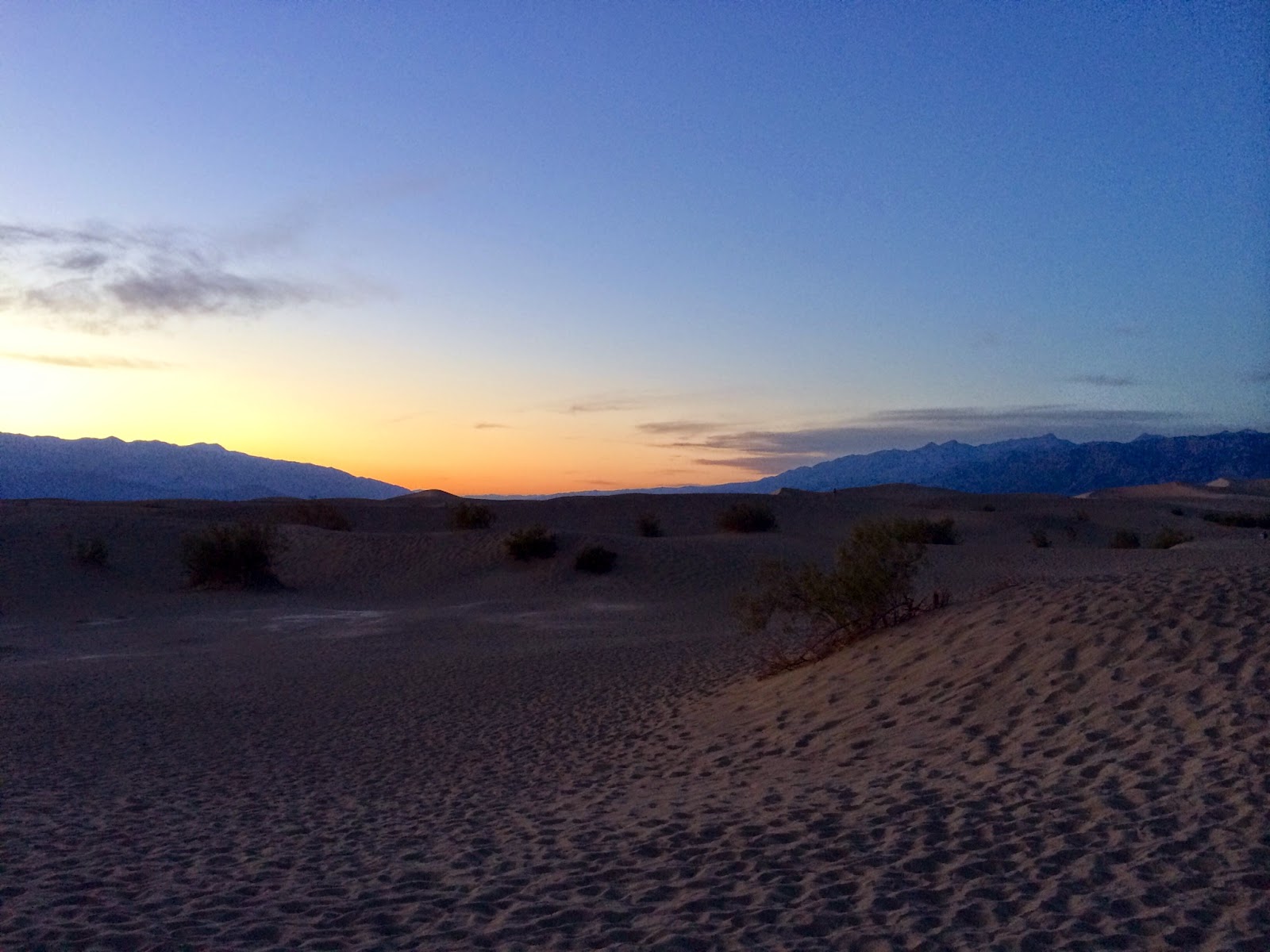 Back up and at 'em, we set out to look for flowers where they'd allegedly been spotted in the south end of the park. Another long and lovely drive brought us to a mountain pass that  had a field of yellow flowers reaching to the peaks, but we could almost see them slowly dying right in front of us. The rare bright spot of color and life is even more pretty than normal here, because the stark contrast against the brown and lifeless terrain. This was about the happiest yellow ever. 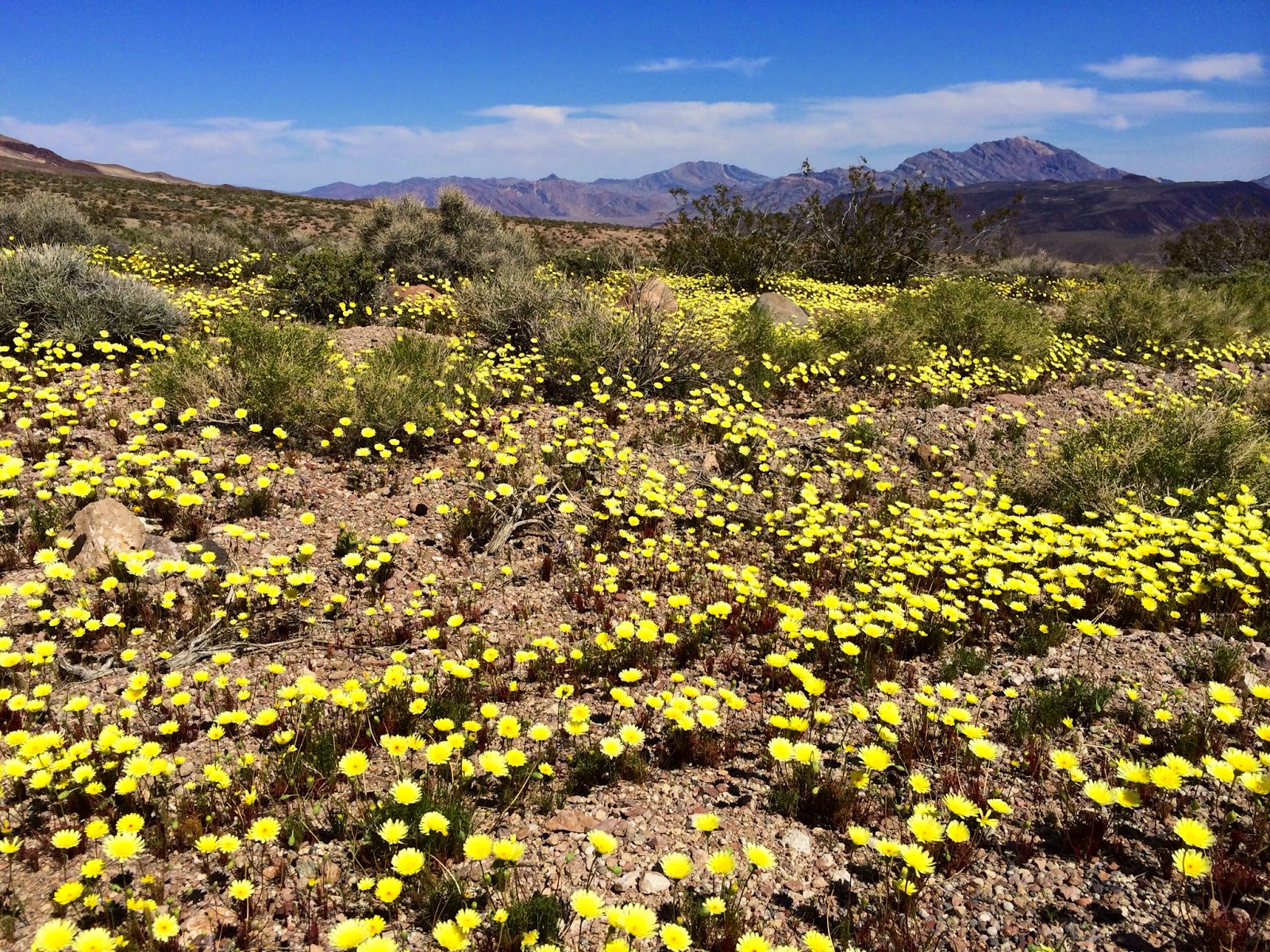 The whole place was founded on mining, which kind of wrecks it a bit for me, because it's an obvious sign of mankind messing with nature. People only ever came here for the mining, and then they needed more people to come once the mining dried up, so their inns and things could still be of use. 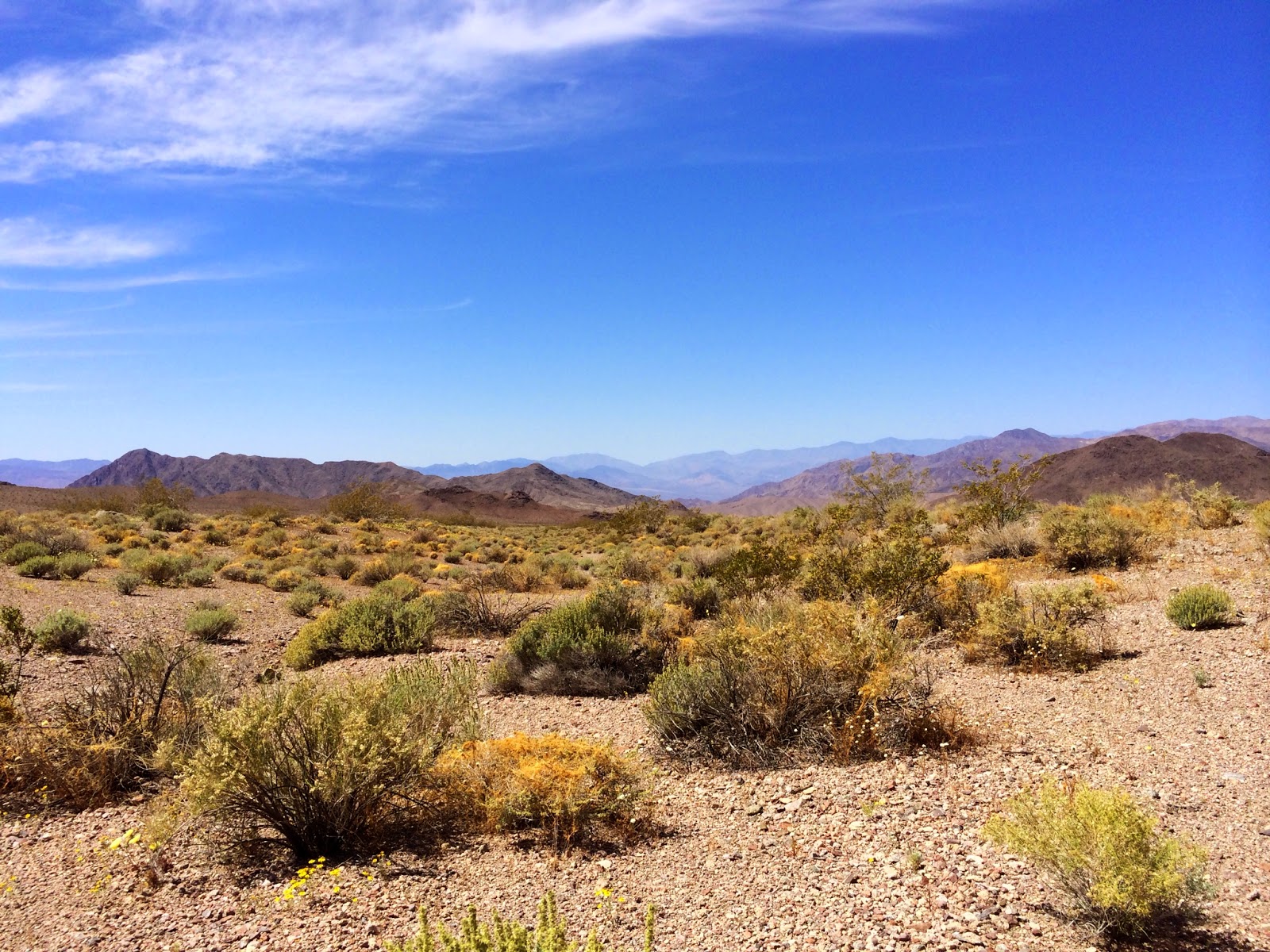 They made it a National Park to get people to go to this outrageous place, and they've been coming ever since. You see people running - actually running - and wonder what the hell is wrong with them. It's insane. 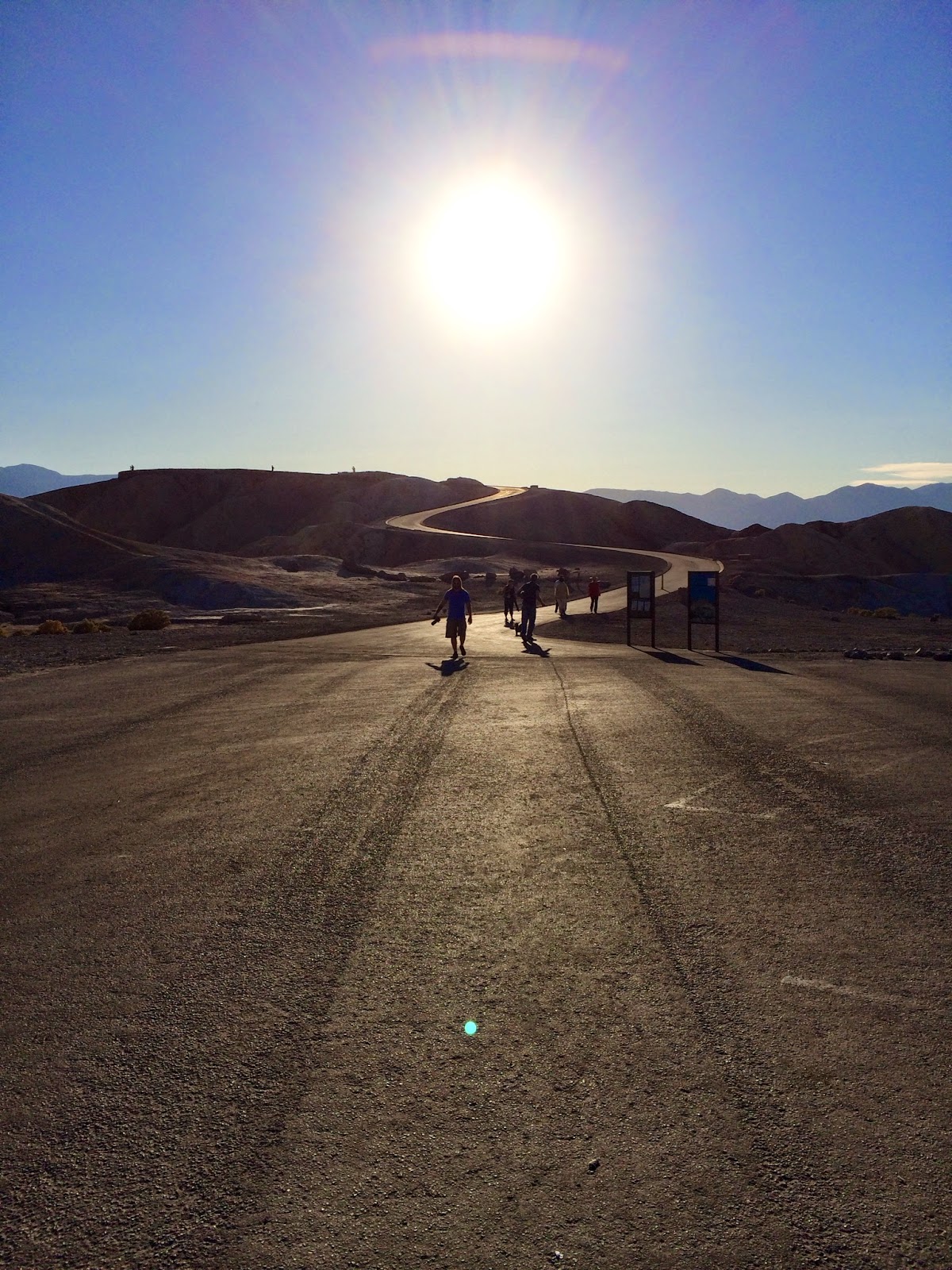 A weird thing is that all the salt everywhere makes it look like snow and ice, so you're the hottest you've ever been, yet it looks like it could be tundra. Very bizarre. 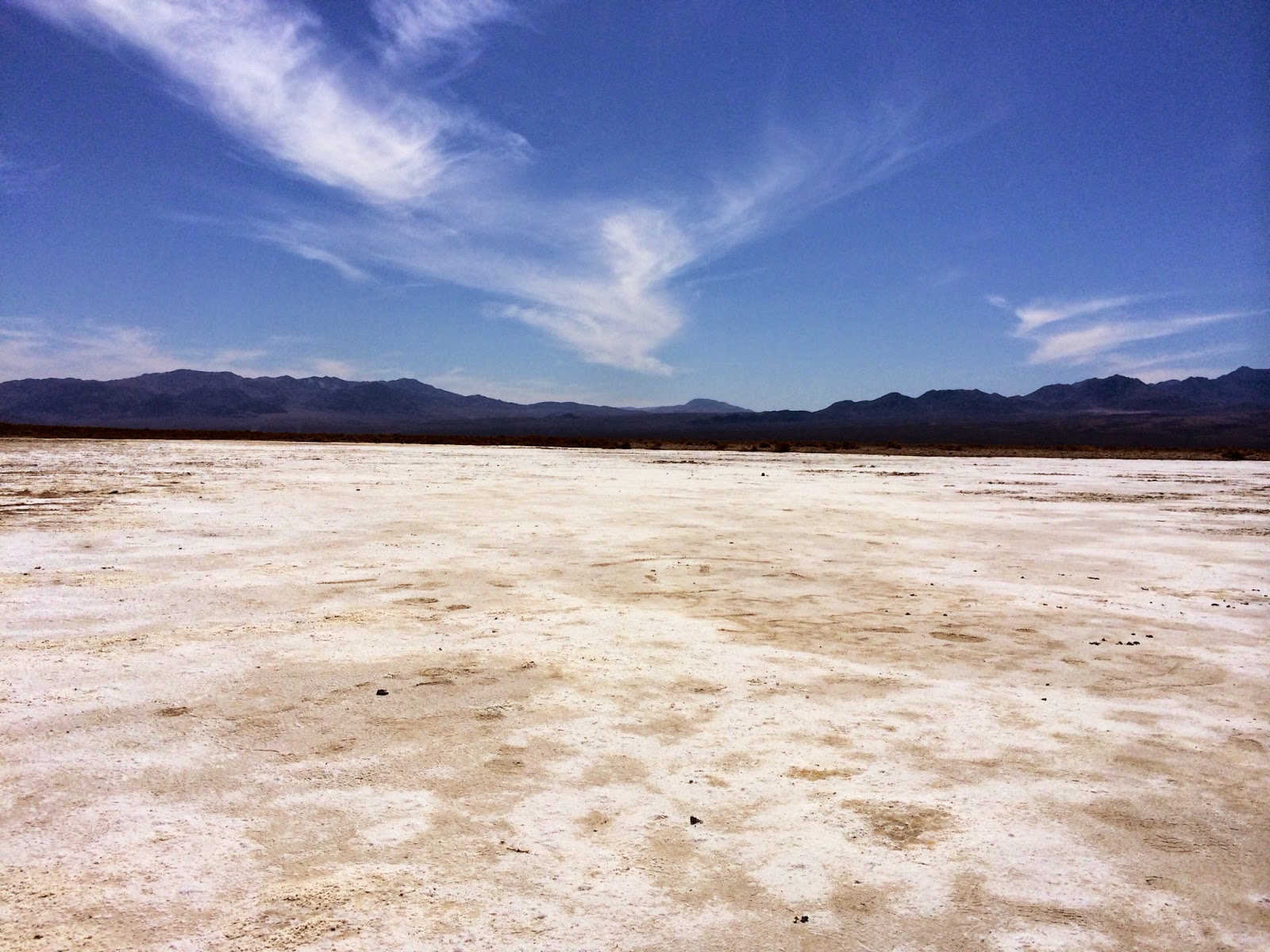 We climbed another mountain to see another view, and this time, we made sure to be absolutely waterlogged to try and avoid the previous day's pounding, debilitating headache. I did much better. 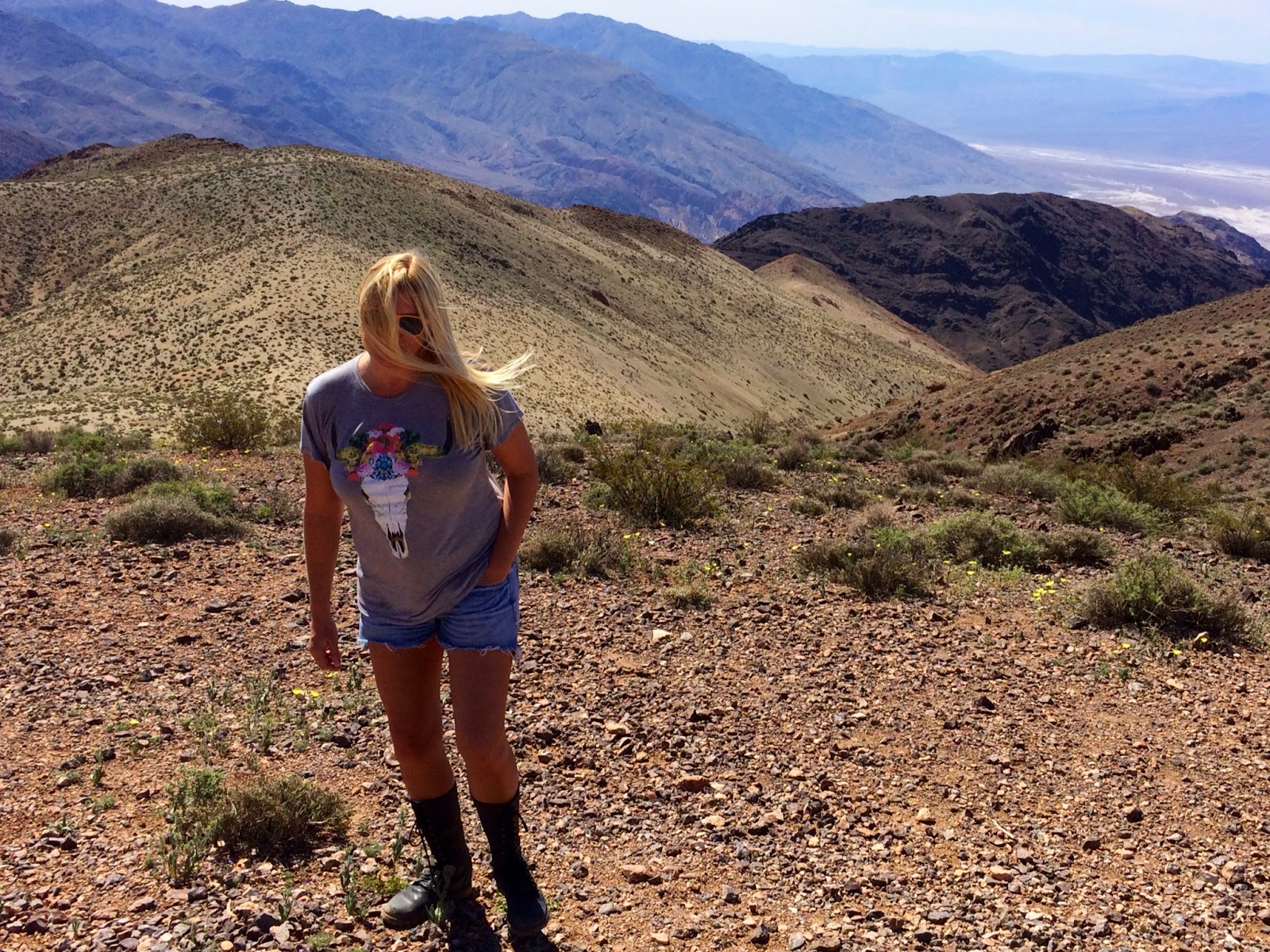 This park is much less populated than other National Parks, so you can get the photos without other people in them. There's also a bit of a camaraderie among visitors, as you're all in the same boat, wearing the same spent smiles, and encouraging each other that they're almost at the pool at the top of the hike (lie). 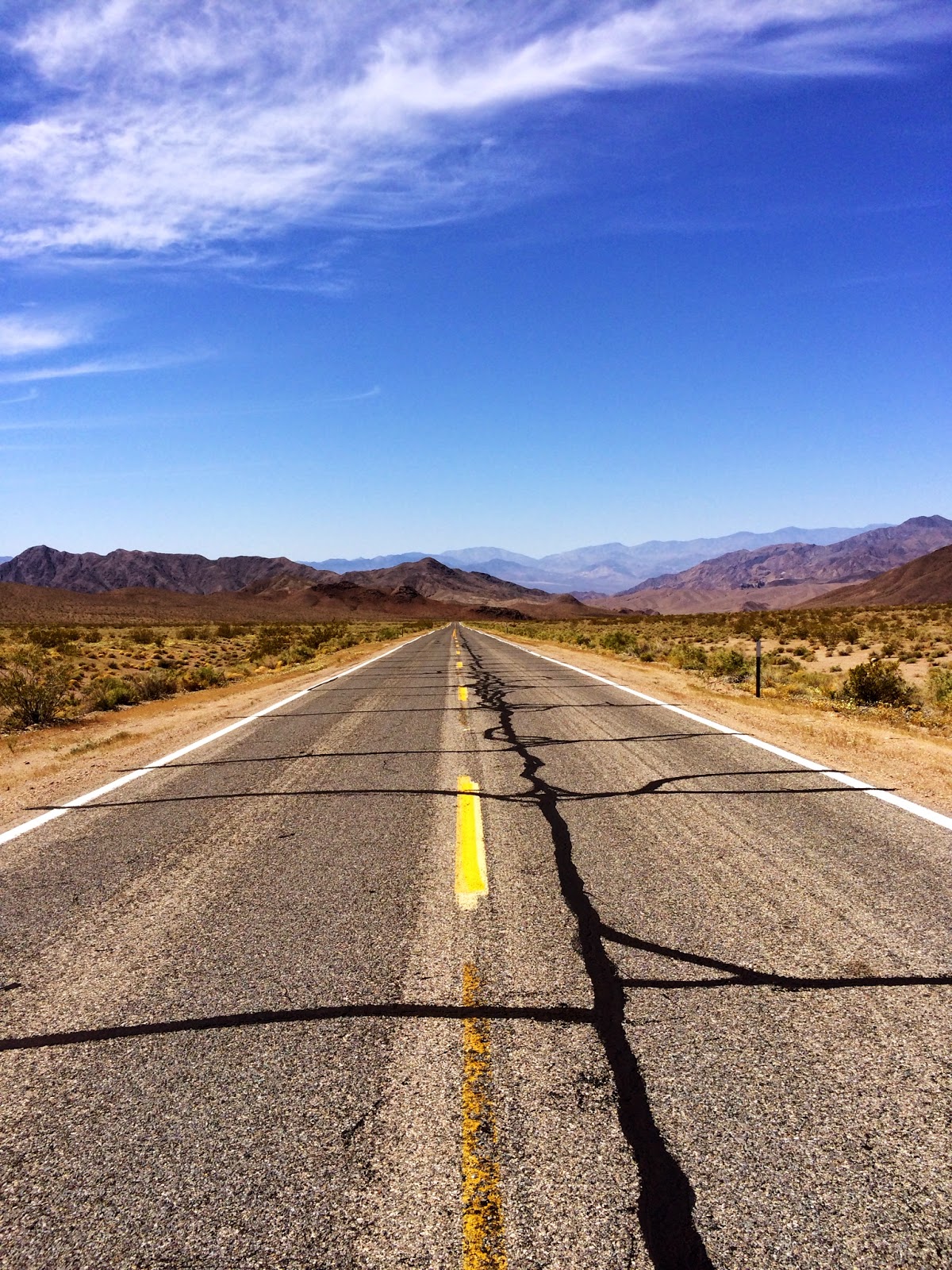 Paul had a show at the Troubadour that night, so we had to hustle to see as much as we could, so we raced through our Sunday at Death Valley like greased lightning, but even with that deadline looming, Paul still had to get the shots (and still made it in time!). 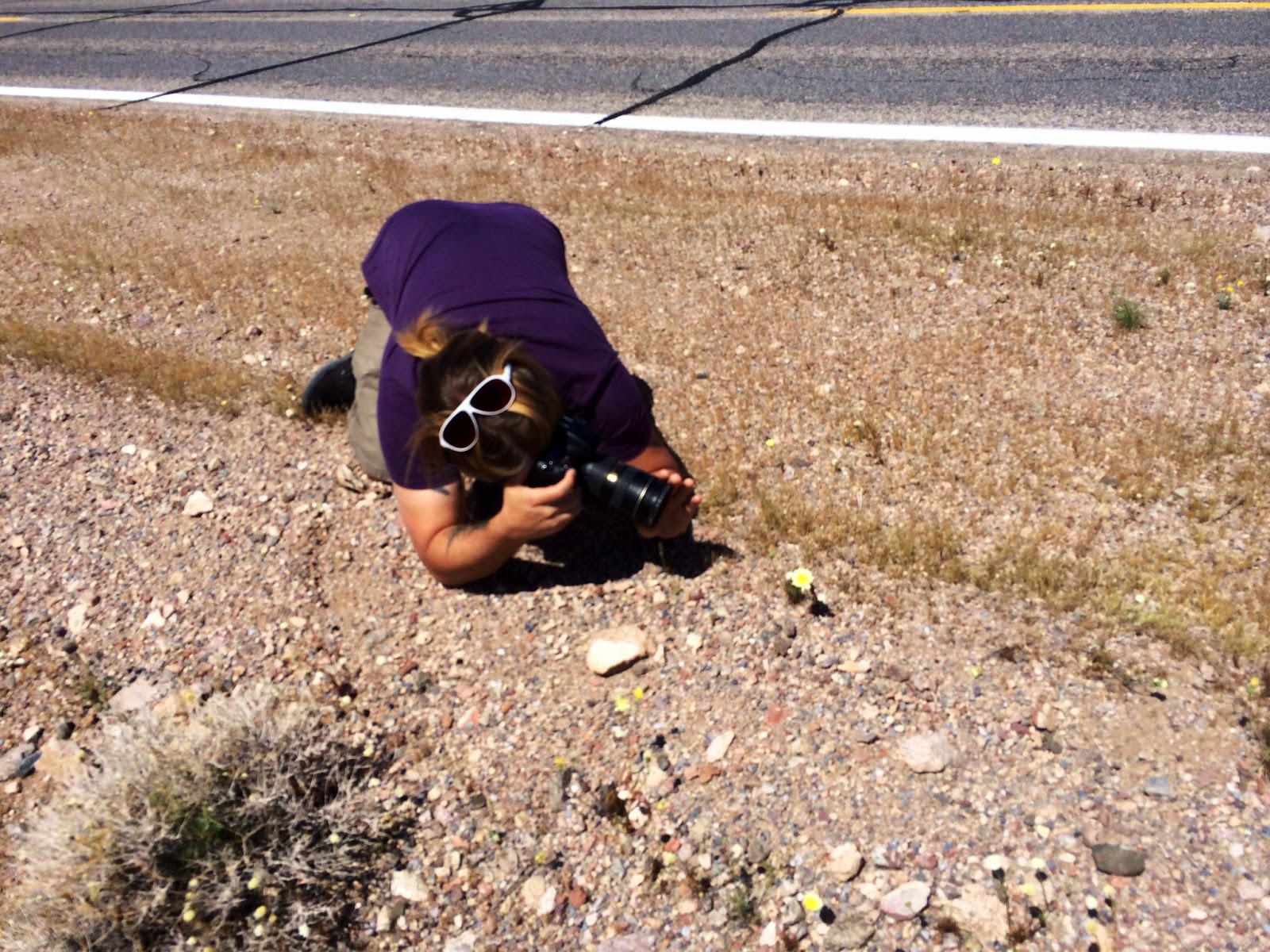 There was a hike called Mosaic Canyon that was one of those really narrow slot canyons like in the movie where the dude had to saw his arm off to get free of a boulder. We didn't stay too long there. To be that hot AND stuck ... naw, thanks. 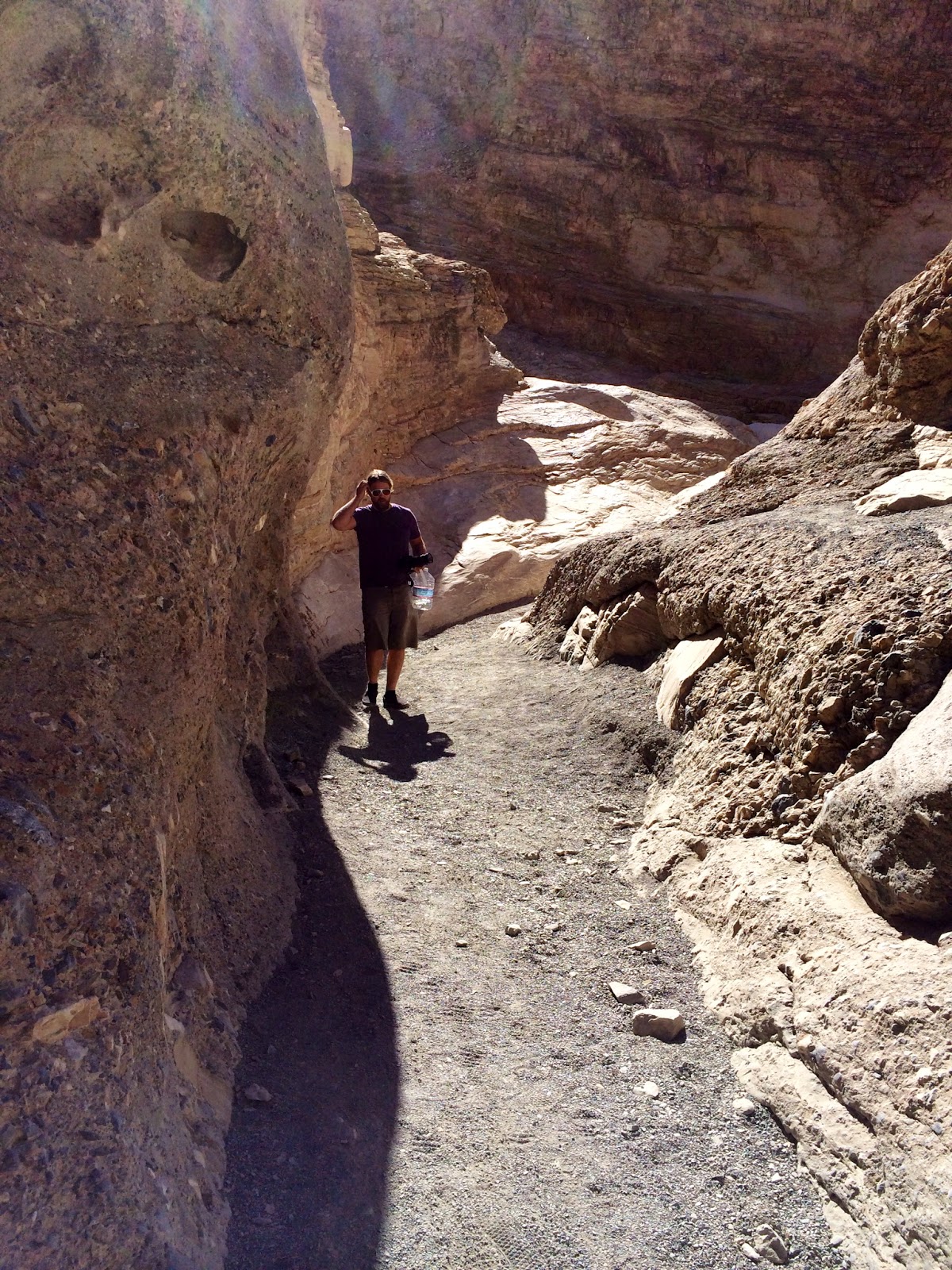 We didn't see quite the superbloom that I'd imagined, but we saw LIFE in Death Valley. We saw rebirth, and experienced a little bit of our own. It's always good to get away, and it's always good to unplug. I had no way of connecting with the outside world for two days (well, I could've, but chose not to) and it was great. To only think about what is right in front of you is one of the best trips you can take, and Death Valley will do that for you. 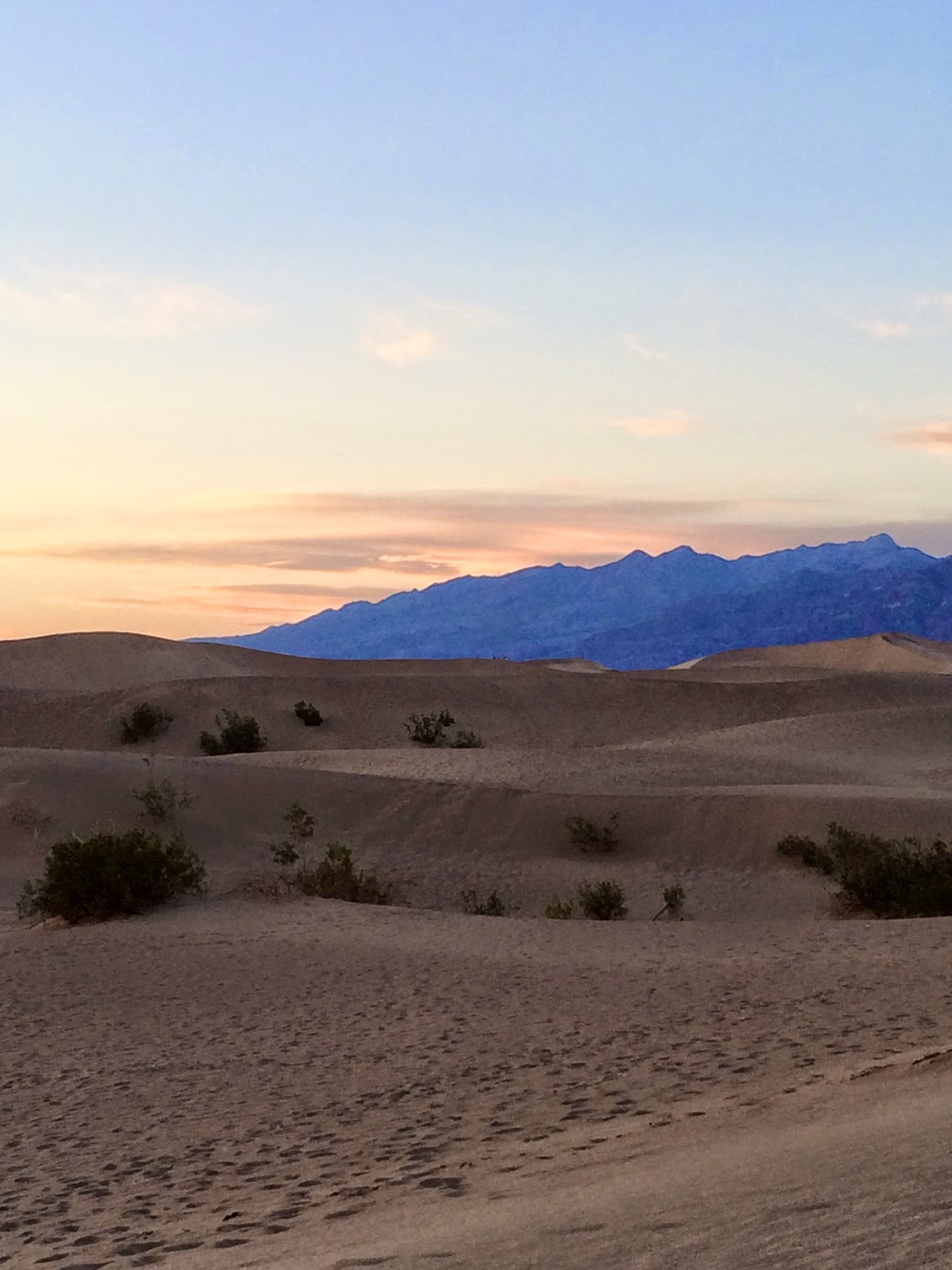 Existing under those conditions - even for just a weekend - makes you sincerely appreciate all the beachy breezes, abundant life everywhere you look, and the sheer convenience of everything in your life. That is one of the true joys of travel and exploration ... loving where you are when you return.
Thanks to Death Valley for reinforcing that lesson, and thanks to Venice for being that happy place to come home to.