I got a kind and last minute invitation to see Steve Earle play and speak last night at the Grammy Museum's "The Drop" series, and I jumped at the chance. I've long admired Earle's gift for storytelling and picking on that guitar, and this Americana Music Association event was on the release day of his new album, Terraplane. It was also Mardi Gras, and as Earle starred on Treme, I felt he'd be a good guy to spend the occasion with.

I was right. We sat there and listened to Earle spin yarns in that "I don't give a fuck" way of his (which he did also utter several times, and is one of the things I dig about him the most) in the silent Clive Davis theater, full of true Earle scholars, as is often the case at Grammy Museum events. It's for the hard core appreciators of the given evening's music, that is always clear. You always feel like you leave with an education, and Earle is a great professor precisely because he is also a scholar of music. Especially the blues.

The talk began with the Grammy Foundation's Scott Goldman asking Earle why a blues album now, to which Earle simply replied, "I had the blues." He's blunt like that, a plain talker. I appreciate that. He's also extra-prolific, with novels, plays, acting roles, and you name it also going on. It's evident and much written about that Townes Van Zandt and Guy Clark were Earle's mentors, and he "debriefed them fucking constantly". "Their influences were Lightning Hopkins and Robert Frost, and I don't want to hang with people who don't get that." Me neither.

In discussing the new album, Earle said, "There is only the Chicago Shuffle and the Texas Shuffle. There is no L.A. shuffle, no offense." The album, as he described it, is one part Howlin' Wolf and Chess Records, one part Canned Heat, and one part ZZ Topp (whose Billy Gibbons was repeatedly brought up by Earle as a badass blues man). If that sounds good on paper, trust that it sounds even better on the stereo, and definitely sounds great in person. He added that, even with all those icons of the genre, "All the blues goes back to one Robert Johnson song."

As it was Mardi Gras, Earle gave a little insight to the day, having learned much during his time spent in New Orleans while acting on Treme. Mardi Gras is really about the Mardi Gras Indians (who were originally street gangs protecting their turf) out to settle scores before the next day that begins Lent. He also mentioned that there will most likely be a New Orleans style album from him one day. About the release date, Earle shrugged, "Records come out on Tuesdays, but I think it's auspicious." 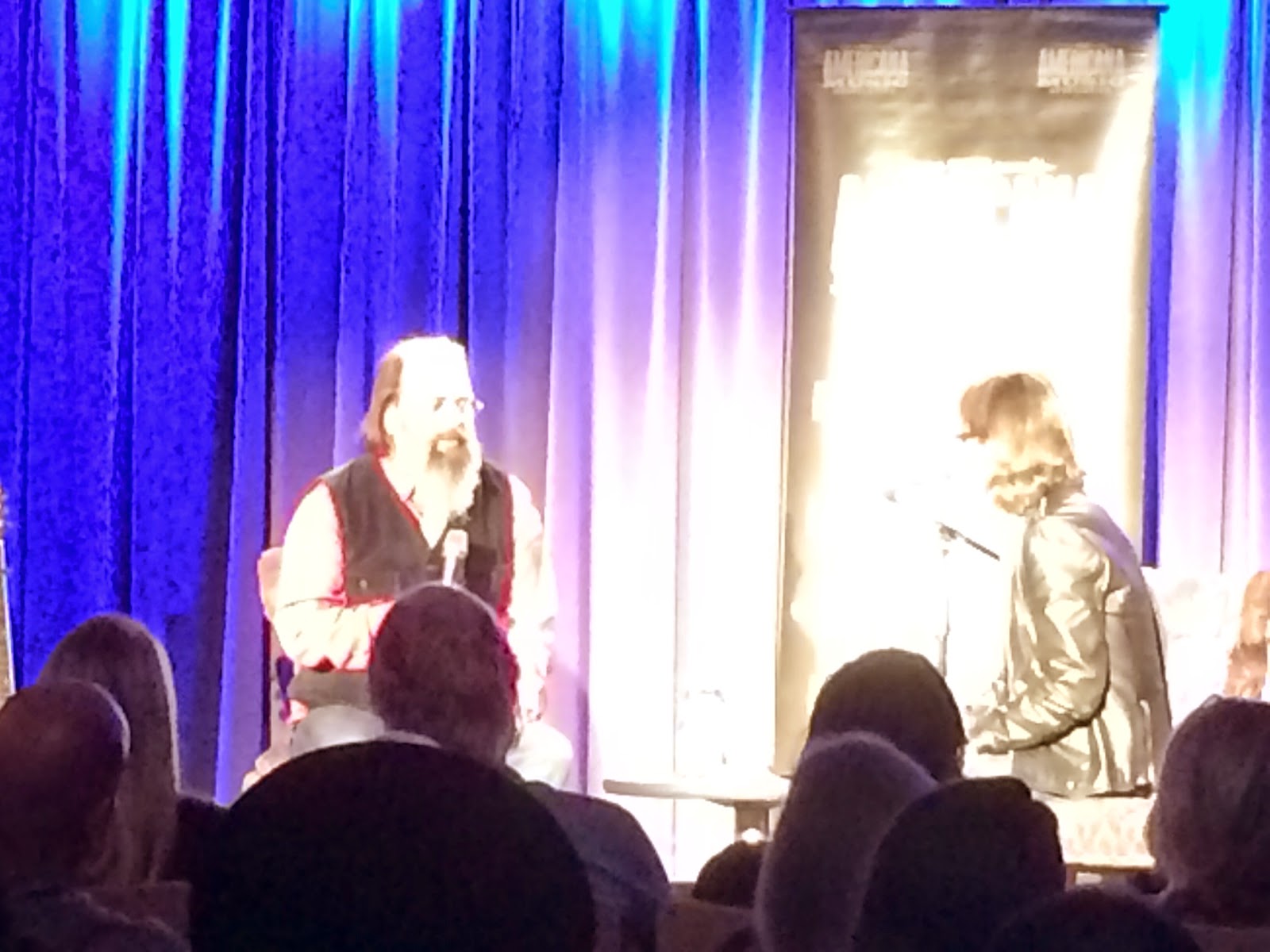 Earle also spoke of his upcoming memoir that will be "Less Keith, more Patti." It's about his mentors, Townes and Guy, about the street people that helped him, and about his Grandfather, who began 12 Step meetings in Texas ... "So, it's a book about recovery." I expect there will be many readers. When asked why a memoir now, Earle said, "I have a son with autism and his school is expensive. The publisher said memoirs pay more."

The Grammy nights are great because they just kind of let the performer go, and let it flow where they want the conversation to go. Earle told us he's recording an album with Shawn Colvin in November. He told us about his Camp Copperhead in the Catskills, where he holds an intensive four day songwriting (his job, after all) workshop. He told us that he's playing Letterman for the last time on Monday night. He told us that his tour starts April 15th, and he'll be playing the Stagecoach Festival out here. He told us he's a better performer now because of his acting. He told of how he saw Bruce Springsteen (who he thinks is THE best performer in rock) play an arena like it was a coffee house, and he went home and wrote Guitar Town the very next day.

Of Guitar Town, he said that a lot of songwriters (even Garth Brooks) tell him that they came to Nashville because of that record. "And I apologize." He said Nashville isn't really a town for singer/songwriters (which Earle often called his "job"), they just churn out from the machine. He came to Nashville himself in 1974, "and we all came because of Kris (Kristofferson, of course), but he was already gone being a movie star by then."

"I write chick songs so my audience doesn't get hairier and uglier, but they're not about the girl, they're still about me." That got a laugh, but I also got it. All songs are about the writer's experience and feelings. Earle explained, "I've got to keep myself interested if I'm gonna keep an audience interested. I'm not Andy Kaufman, an audience makes a difference. What I have in common with my audience matters more than how I'm different. And it keeps me in a job." Well, this audience loved that.

Speaking of Van Zandt and Clark, Earle gratefully said, "I was the beneficiary of a real life, old fashioned apprenticeship, which doesn't happen much anymore." True. "Songwriting as an art form is the job that Dylan invented ... it happened because Lennon wanted to be Dylan, and Dylan wanted to be Lennon."This is a man who knows his music history.

I've always enjoyed Earle's rebel streak, and his line of the night for me was when he said, "I loved corporate money. I love to take their money and write a song about Revolution." Yes. YES! 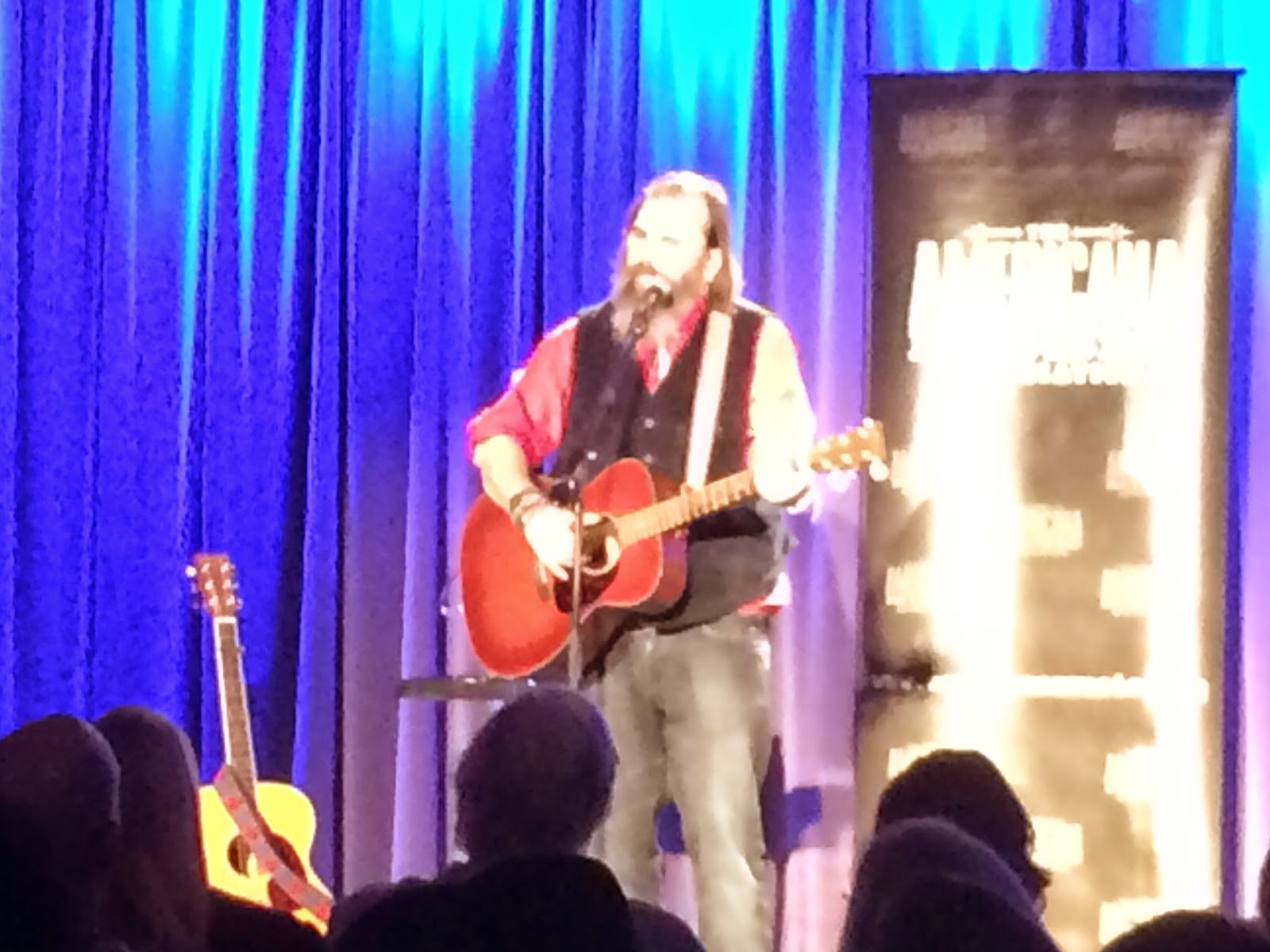 Then it was time for some of those songs we'd been talking about. Earle began strumming his guitar and releasing a huge sigh, almost of relief that the talking part was done and he could get down to his job now. He opened with "Ain't Nobody's Daddy Now" off the new album. And it ruled, as you knew it would.

"This is as close as there is to a chick song on the record," said Earle by way of introducing "You're The Best Lover That I Ever Had." It was great, and steamy and these chicks appreciated it. "Gamblin' Blues" was more for the dudes (and Lightning Hopkins), and they dug it too.

"King Of The Blues" had heads bobbing and toes tapping, and after hearing those stories, really having a grasp on where it came from, rounding out the song's experience beautifully. He told his oft-told tale of Van Zandt riding a horse in a snowstorm (which he fully intends to replicate) as an intro to his great ballad, "Fort Worth Blues", so visual and literary both. Earle ended with the crowd favorite and classic, "Copperhead Road." At song's end, the audience (that matters!) leapt to their collective feet and applauded until Goldman broke it up to say Earle would be signing his cd in the lobby.

As I watched the long line of people waiting to meet Earle and share their Earle stories, I remembered that Earle had said during the show that people always asked him if Van Zandt was Pancho or Lefty. Earle laughingly answers, "He was both." Observing Earle the performer and Earle the person with his fans, I suspect that like the King of The Blues Earle sings about ... Earle too is both.

What a great evening of music ... that didn't end there! We high-tailed it back to Venice to catch Lacey Kay Cowden and Matt Ellis at The Townhouse, and listening to their songs ... you might think that Earle is now a mentor himself. Beautiful, literary, cinematically visual songs that might break your heart, might teach you something about yourself, but for sure will cure any blues you thought you had.