Babes In Toyland - Reunited In The California Desert

I feel like I just emerged from an awesome time machine. It took me back to the 90's, right in the middle of a frenzied punk show that was all I cared about in that given moment. We left Venice in some of the worst traffic I've ever encountered (like it almost made us cry) to head to the desert for the long-awaited and hoped for Babes In Toyland reunion at Pappy & Harriet's in Pioneertown. Like, I mean we left at 3 pm, and we were late for the 9 pm show. Yeah. L.A. traffic has been grizzly lately, something has to be done to help the people. It's wrecking our buzz.

The buzz that we didn't yet have when we walked down the dirt road toward Pappy's ... already hearing the punk rock of my Minneapolis youth pounding out of the building, as we ran to get there and avoid being hit by all of the zillions of stars in the sky. Wow. 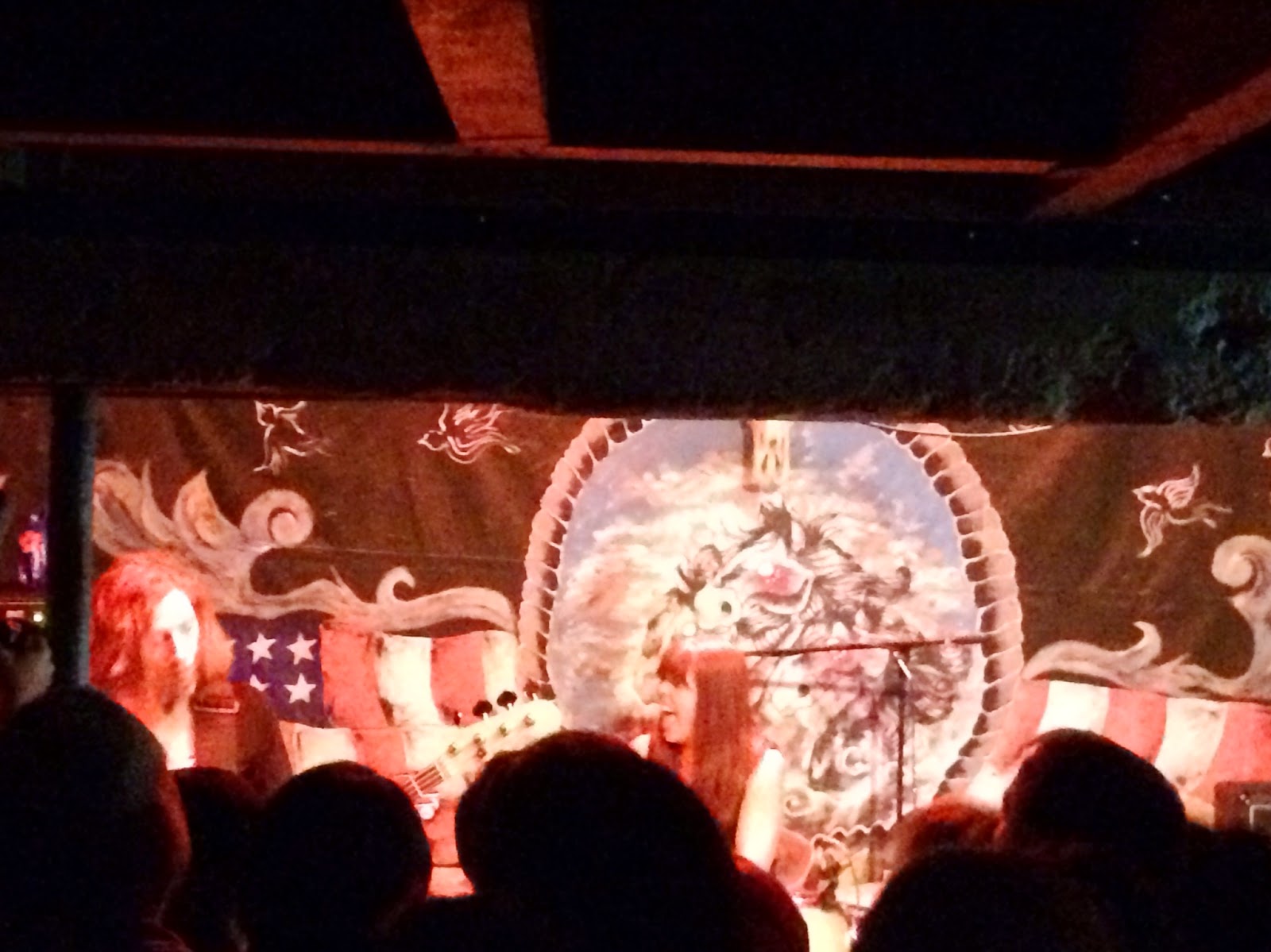 The sold out venue was packed with fans, many of whom I overheard say they'd just flown in from Minneapolis, or Europe, or Australia (or just up the road) just to see this seminal and inspirational to many band. We completely missed the opening band, Deap Vally, but I heard people say they ruled, and the lead singer's Mom told me they did too. Awesome.

Kat Bjelland, Lori Barbero, and Maureen Herman were already tearing it up when we got there, and the fans were ecstatic, in an arms raised froth, yelling for their favorite jams. As it was so packed (and we were late), I didn't really get to take awesome notes, or hardly any photos where you can see anything on the stage (Pappy's could maybe raise the stage a couple feet to avoid this dilemma). No matter, it was awesome, Babes In Toyland are as awesome as ever (maybe even better, playing soberly and TIGHT), and that's all you really need to know. As well as what they played, so here's the set list I snagged. 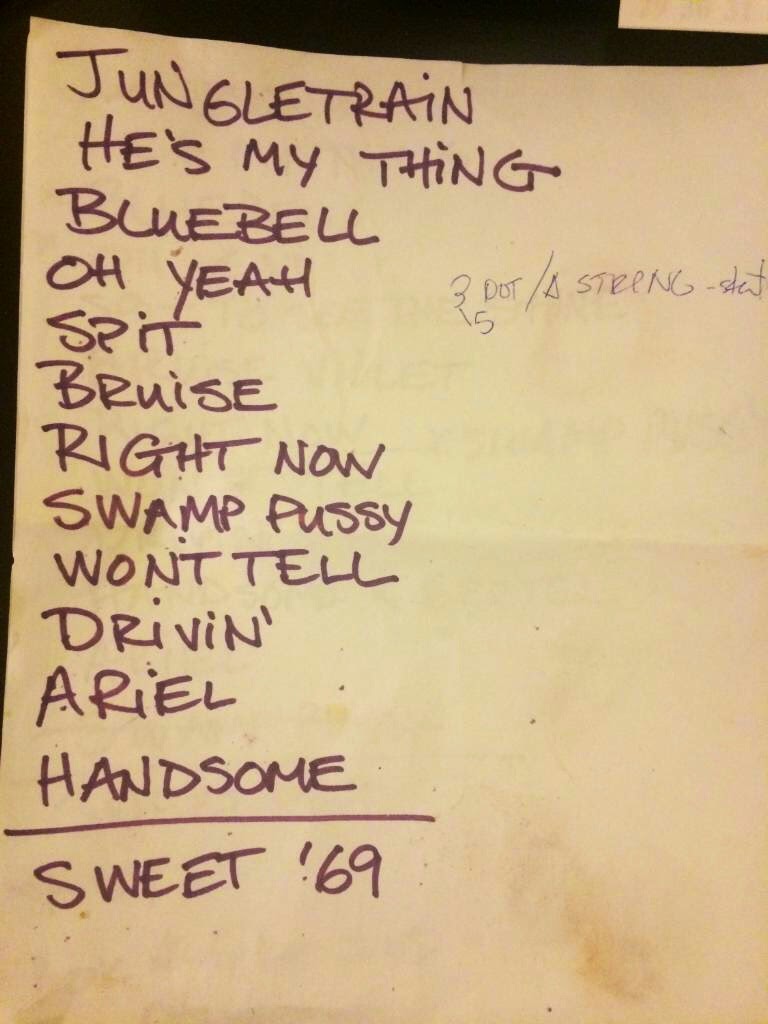 And here's a crappy snippet from the thick of it, of the absolute rock being thrown down by these fiery dames. It was so heavy, even superfan Peaches was seen throwing arms up and head back in true respect. Even with a bunch of tech difficulties, this band was BACK. YESSS!


It was all over too soon (especially after that drive), but that freed everyone up to catch up and congratulate, and celebrate the fact that the Babes are back!

I met up with my bass playing friend, Maureen Herman, and just gushed all over her at how great it was. As we walked together to the back area, a fan (one of the ones who had flown in from Minneapolis) told her that she had loved them since she was 11, and she was now 33, and this was, like, the happiest day of her life. You could tell she meant it. How great is that? Your band breaks up, life's drama ensues over a bunch of years, you overcome that drama, get the band back together, and the response is so huge the rafters were still shaking, and then you're told that you gave someone the happiest day of her life. I'd say it went pretty well. 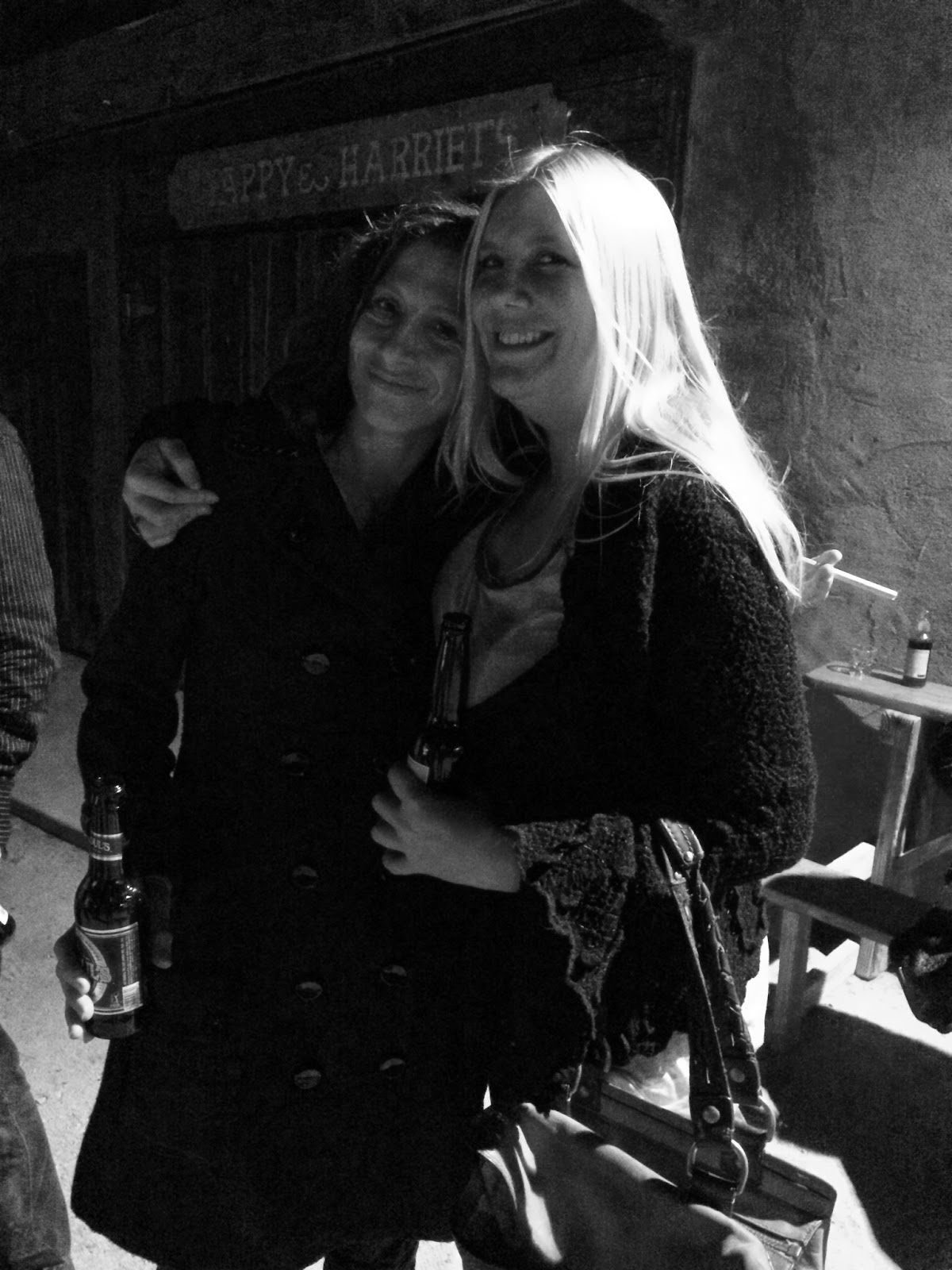 At one point in the show, Bjelland said, "This is our first show in a really long time, so we're kind of nervous." That didn't show at all. Then she said she hoped we wouldn't mind if she didn't play with her E string. Nope, and that didn't show at all either. Fans were too blissed out to really notice anything other than that their Babes In Toyland were playing live in 2015 right in front of their faces. It was actually pretty emotional for fans and the band alike, prompting Barbero to say, "I'm seriously going to start crying in one second... No, that's bbq smoke in my eye." To which Bjelland said, "Bullshit." And she was right. The shit was REAL.

Bjelland is sort of fascinating because she speaks in this tiny, sweet, little voice, then unleashes this absolute blood-curdling ROAR when she snarls out "CEASE TO EXIST!!" (during "Swamp Pussy") ... a good analogy for women all-around, I guess.

Fans hung around after the show and the band hung out for them, signing merch, taking photos, hearing stories about how far fans came and how much it meant to them. It was just great.

And then we stared at the stars until the sun came up over the pastel desert, got back into more hours of traffic, and clambered out of the time machine (car) to wonder if it was all just a really good flashback, or did it really just happen?

Turns out it happened. And will continue to happen, with shows all over the place, starting with The Roxy in Hollywood tomorrow night (for which tickets sold out in two minutes a few months back and why I shlepped to the desert to see them first), which you know is just going to kill it. Really do try and see these impressive ladies - pretty much every woman in rock and roll today owes them a massive debt - you will be rocked back to the future.