I thought I was going to go insane with all the Black Friday ads and all the consumerism off to the races the second Halloween was over (not to mention the very important general need to get away from it all), so after a lovely Thanksgiving with dear friends (Thank you, Jenny and Shane!), I needed a massive dose of nature and real beauty vs. the accumulation of more stuff. So we jumped in the car and headed for Yosemite, with not a single plan made.

I'd never been to Yosemite and it's always been on my list, and I can't believe it took me this long to get there. Now that I've been, I think I may be a regular. Wow. Even just the drive up was spectacular, with fluffy clouds putting on a show in the bright blue sky. My phone had no signal from about an hour outside the park, so the whole time was spent with my phone as just a camera. Totally unplugged, no option. It was Heaven. 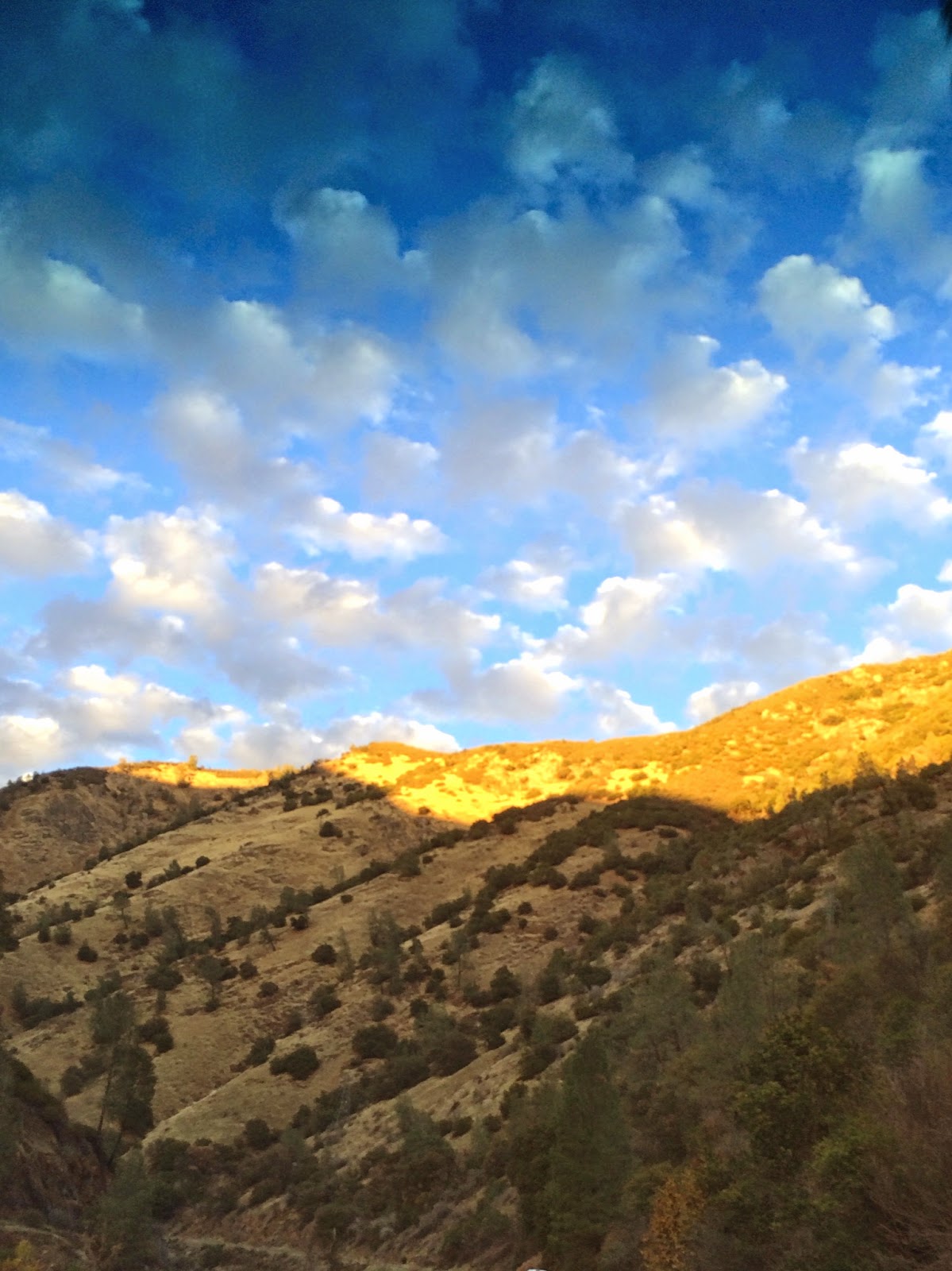 We arrived pretty much just in time for sunset in the Yosemite Valley, which we sped to see, but really just caught a little glow on El Capitan as we drove in. It was so majestic and beautiful that I immediately teared up, and all the thanks from the day before felt even more tangible - and REAL, not material. 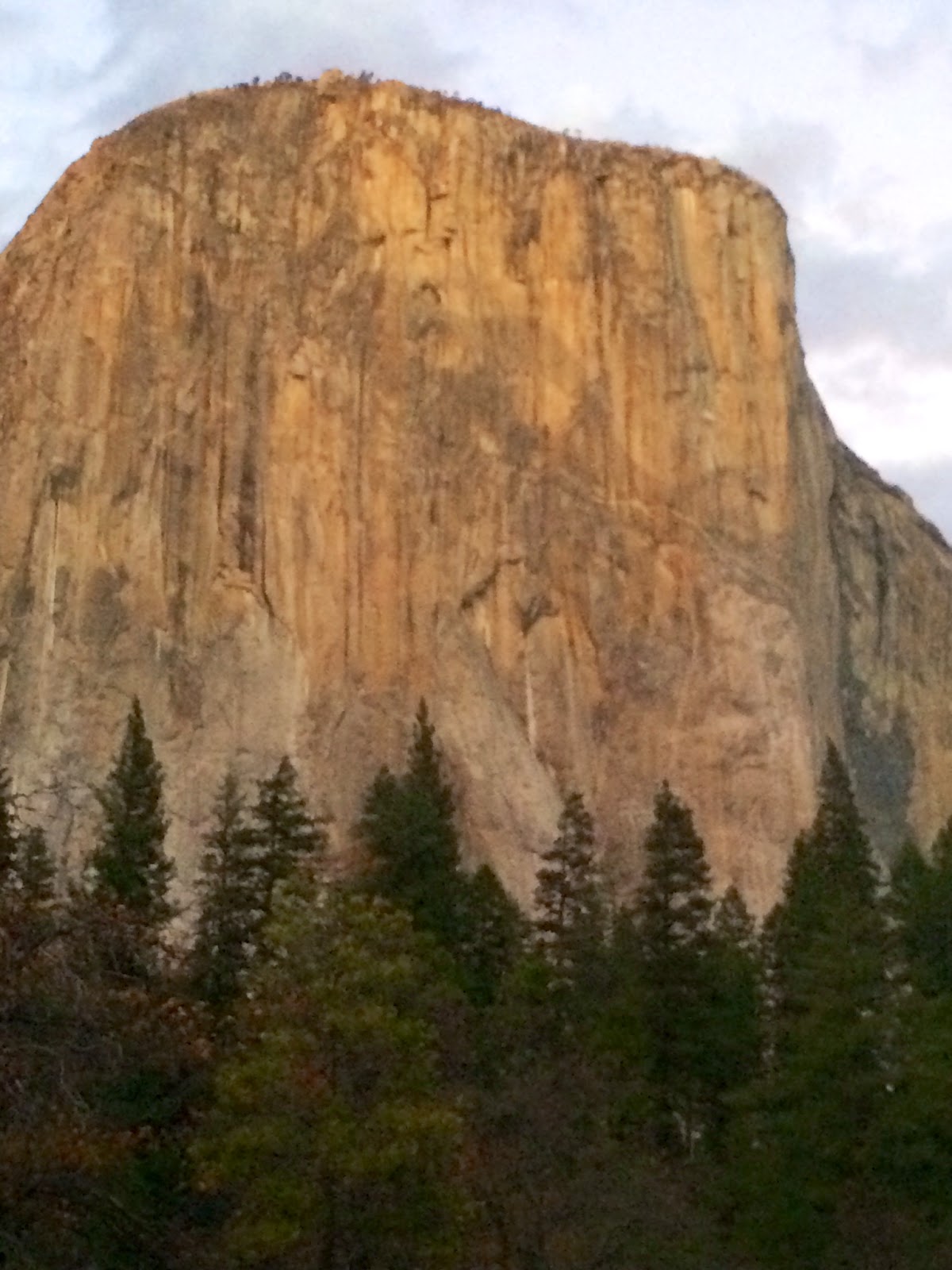 It was pretty cold and as we just jumped in the car last minute, with no equipment (or even coats), we had to forgo the option of a canvas tent in the valley, but it was tempting. 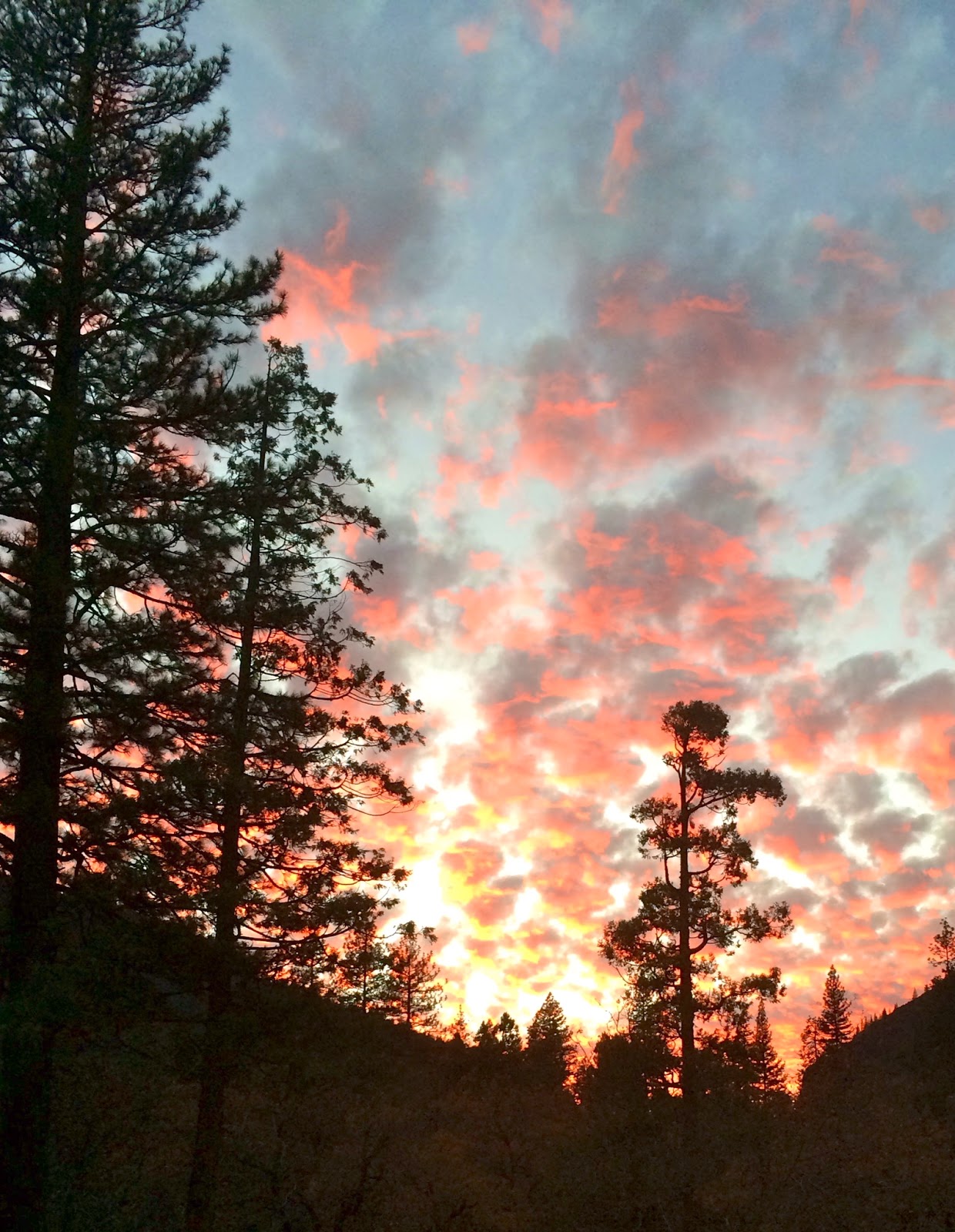 Instead we warmed up by the giant fireplace in the beautiful (and very Harry Potter like) Ahwahnee Hotel, and I finally got the hot toddy I've been after at the Yosemite Lodge. A good one.

I found a room at the Inn right at the park entrance, and was up early to pack as much Yosemite in as possible the next morning. 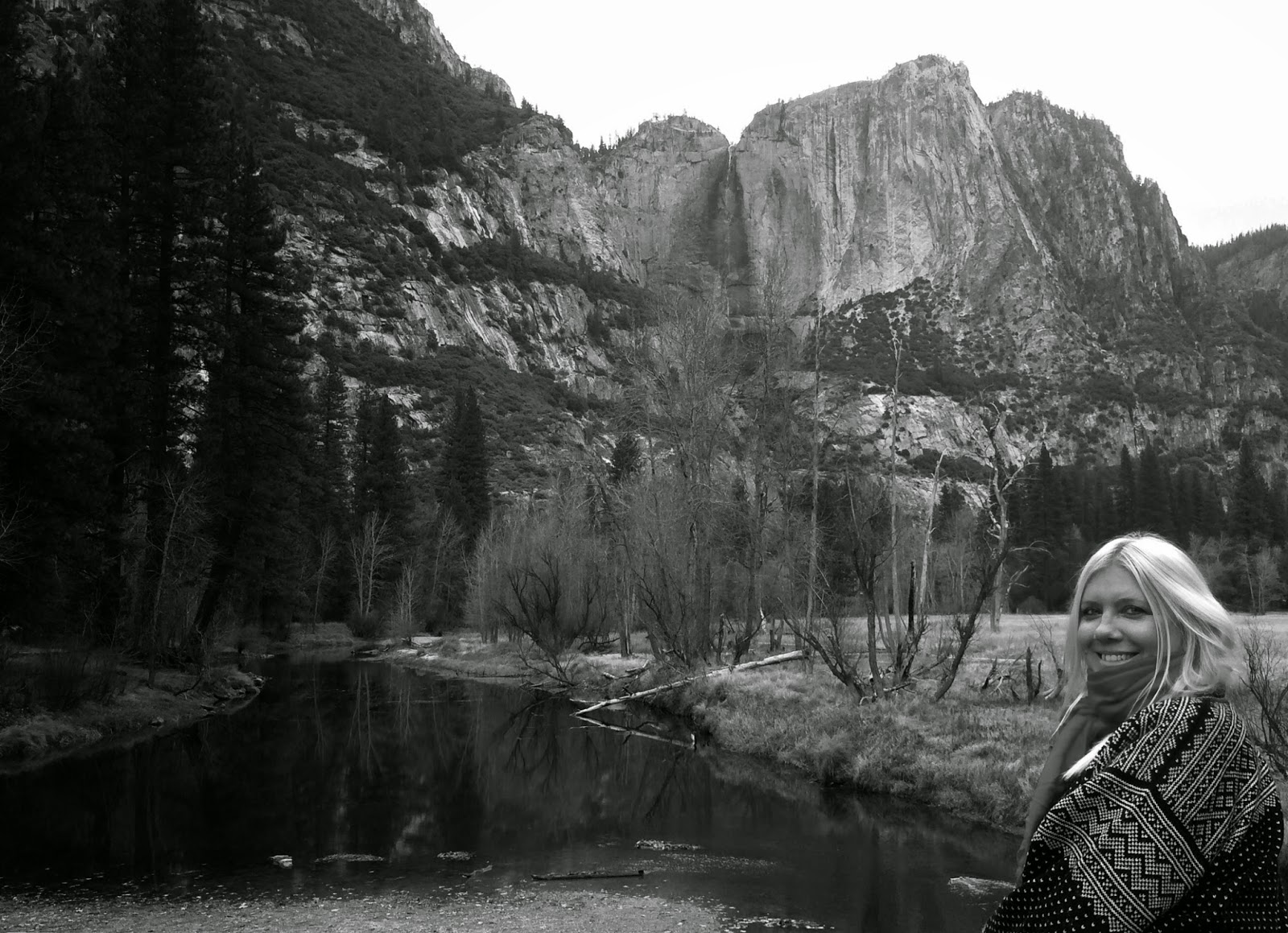 After a hearty breakfast (and Peet's Coffee available in the middle of a valley!), it was on. Armed only with some water and our cameras, we were off. Everywhere you turned, one vista was prettier than the next. 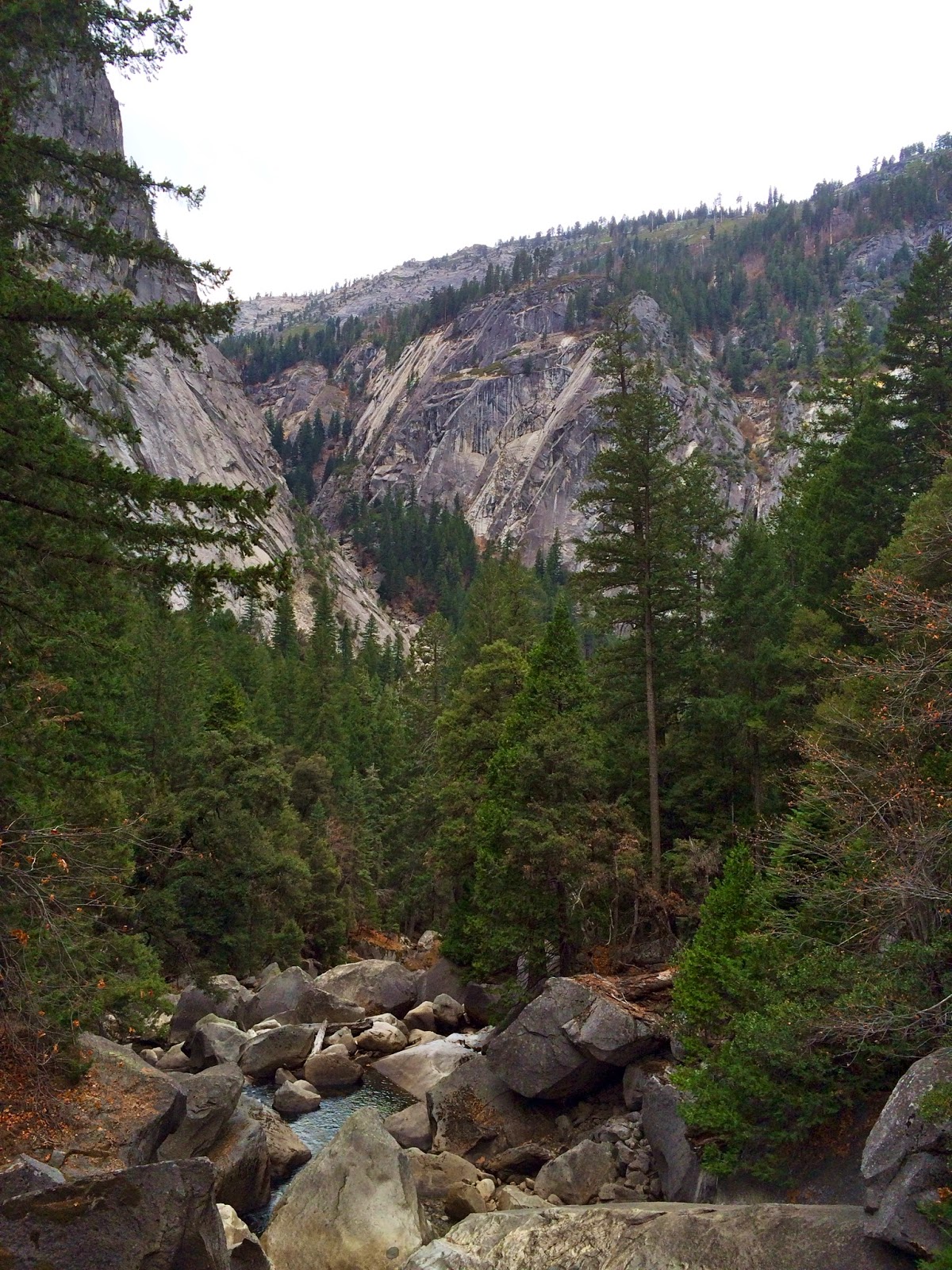 A lot of people shared my need to get away, it seemed, as the trails were full of happy and rosy-cheeked nature lovers from all over the world. What a joy to know that people from everywhere still flock to these natural wonders in our techno world, as they always have. I loved every minute of it, even as I was half-dying as we hoofed it up the mountain trails. 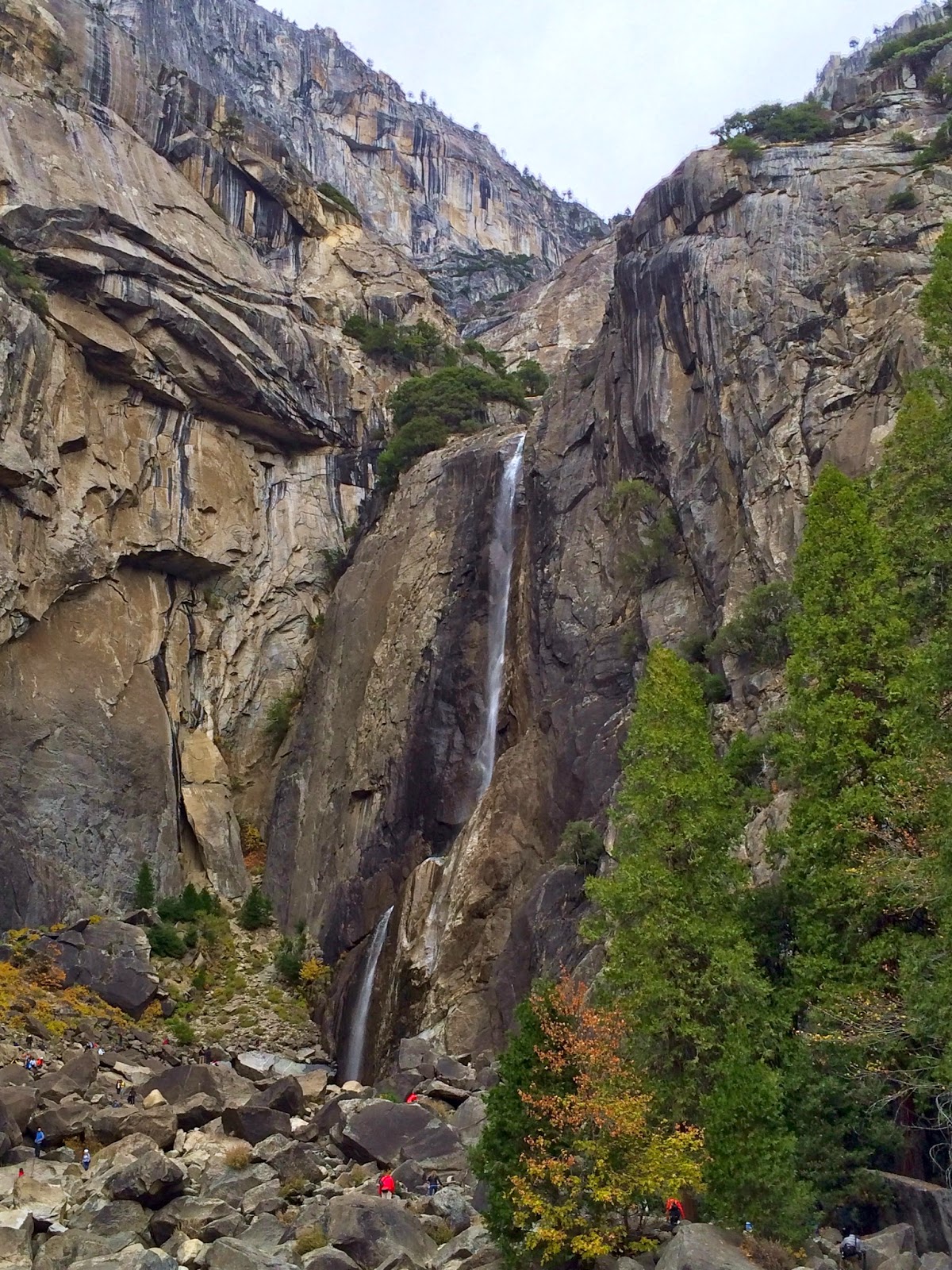 The various falls were pretty timid, as we've been in the worst drought ever, but the sheer height and fact that they still exist was wondrous enough for me.


I was hoping for a bear encounter, but was delighted to be a bit of a deer charmer instead. These fearless babies walked right up to me, but maybe they were so cool because their big Dad was kicking it close by in a bush, his giant antlers camouflaged among the branches. It was great. 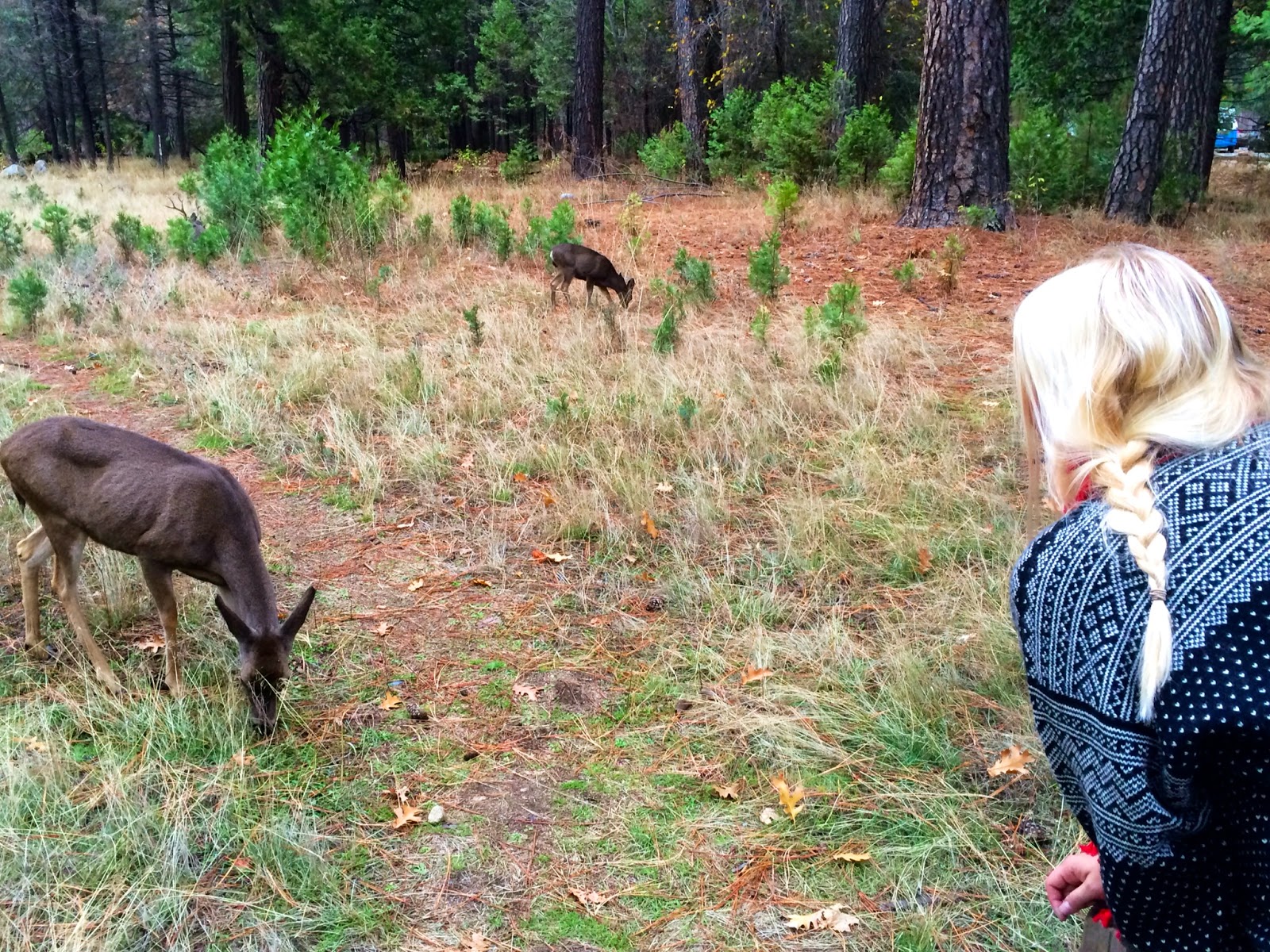 The John Muir Trail goes forever, but we had a lot to squeeze in, so decided to climb up to Vernal Fall, the first stop on the Mist Trail. It was pretty heavy metal, super steep, and as the air got thinner the higher you went, we had to stop and gasp and shoot the breeze with fellow hikers a few times along the way. 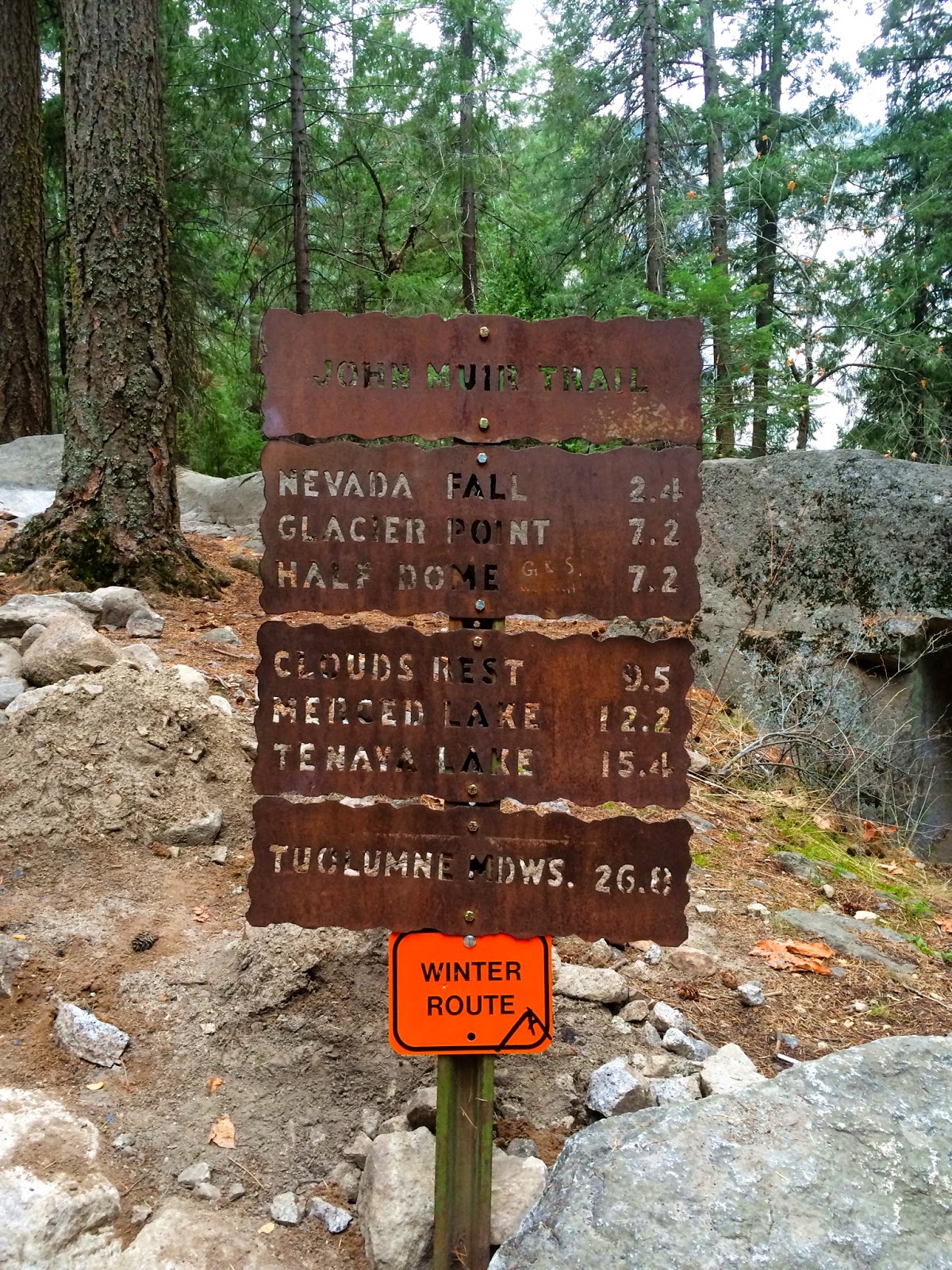 Awesomely, I ran into a skater couple all the way up there - with their boards! They had just come from skating in Venice, if you can believe that. Instant friends. But seriously, I have no idea what they were planning, as you would surely die going down this trail (way steeper than it looks), but good for them! The higher up you go, the trail narrows into stone steps that someone long ago built to get everyone up the side of this giant mountain, and I was thinking of those guys with every step. The sheer effort in making it so everyone can see these natural wonders through time is breathtaking - as is just walking up them. 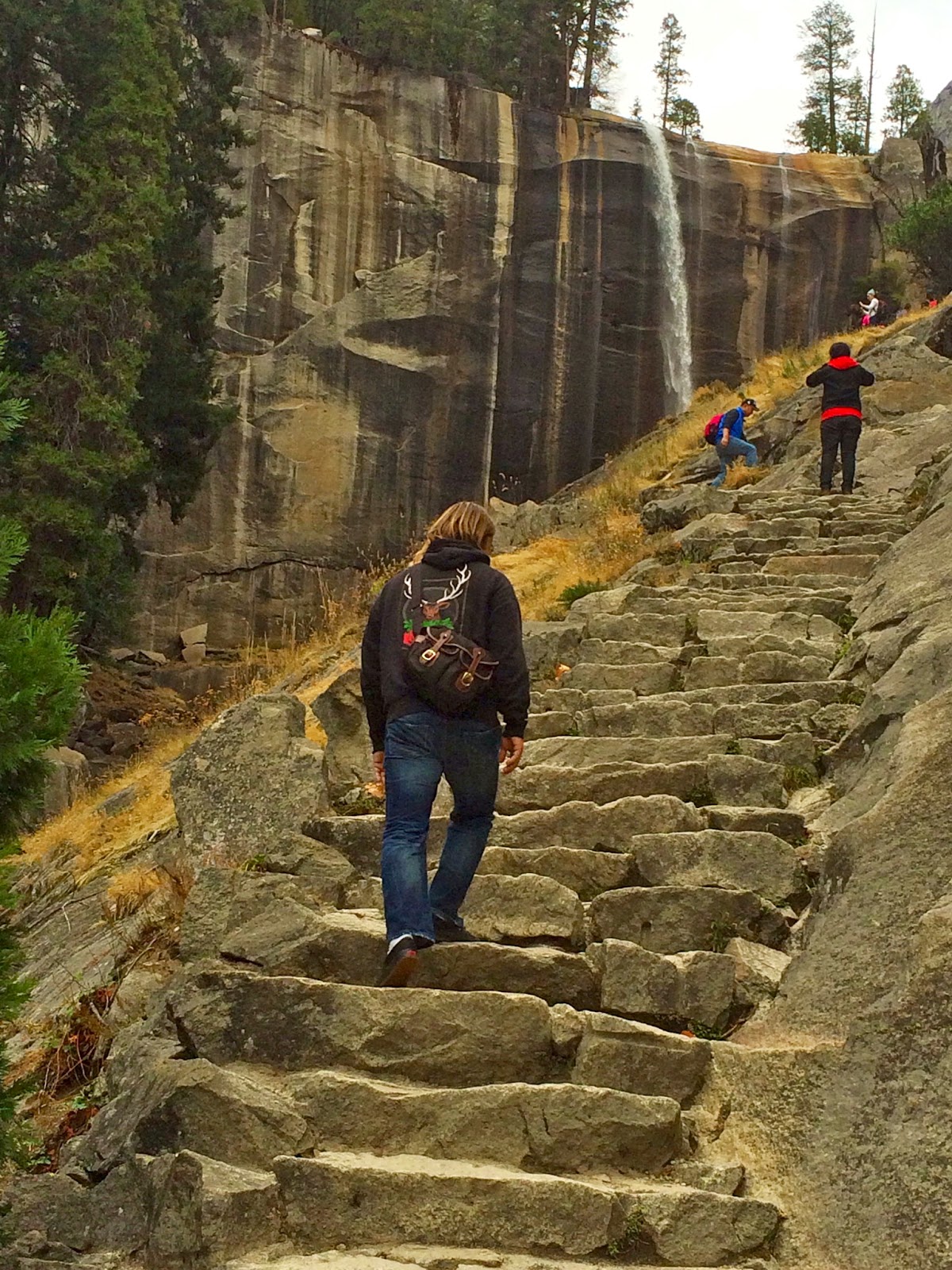 The reward is mighty once you reach the falls. We climbed down a dirt path and up and over stones to get to where you could actually feel the splash of the water on the rocks, and it was thrilling. 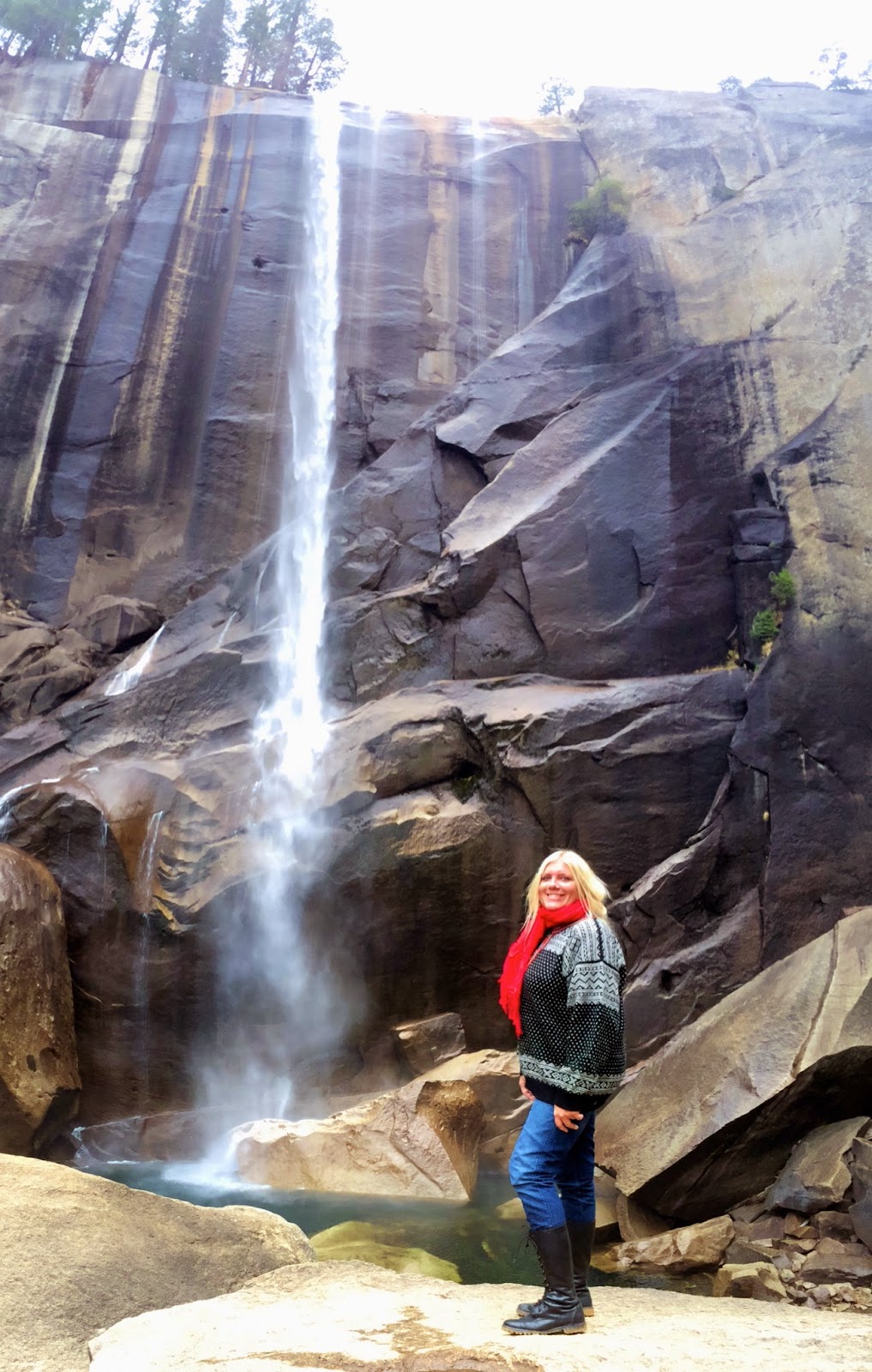 You can keep going all the way up to Half Dome, but we had other sights to see, so raced back down the mountainside after a few Griswold-worthy nods and photos.

Then it was zip back to the car and check out Bridal Veil Falls and then the long and winding drive up to Glacier Point - only to discover that the remaining road was closed due to snow! We had no chains (or even mittens!), so we stopped at the very top at the Tunnel View vista to take it all in before getting out of the snow zone before we were stuck there all winter. 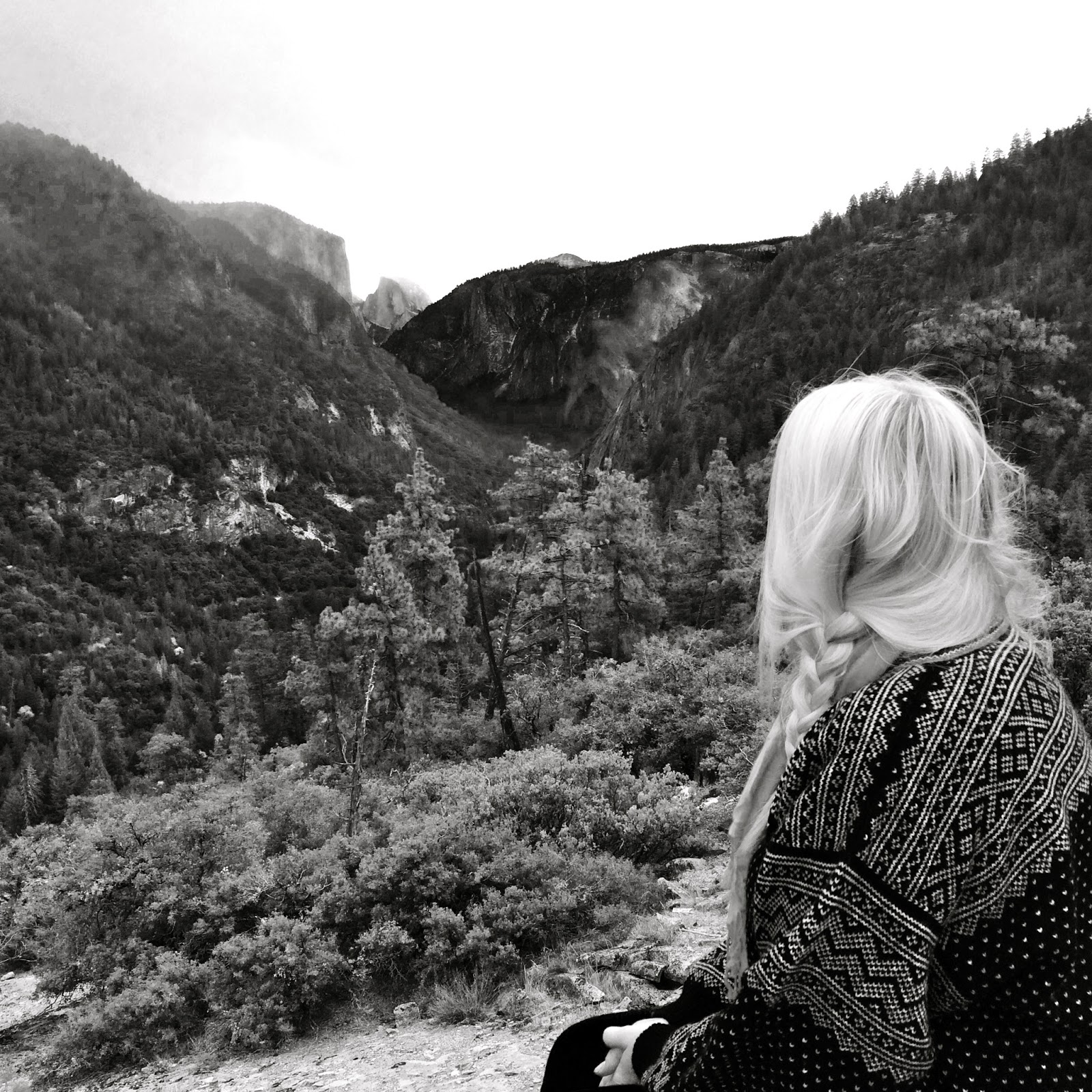 Missing Glacier Point meant that we were (just) able to catch the giant sequoias of the Mariposa Grove on our way back out of the park. I mean GIANT. You could see where there had been forest fires and knocked some of these miracle trees over, like the Fallen Monarch one you come upon first. Insane. More deer came out to greet us as we raced to see as much as we could before darkness fell, and it was coming quick - as was the snow. 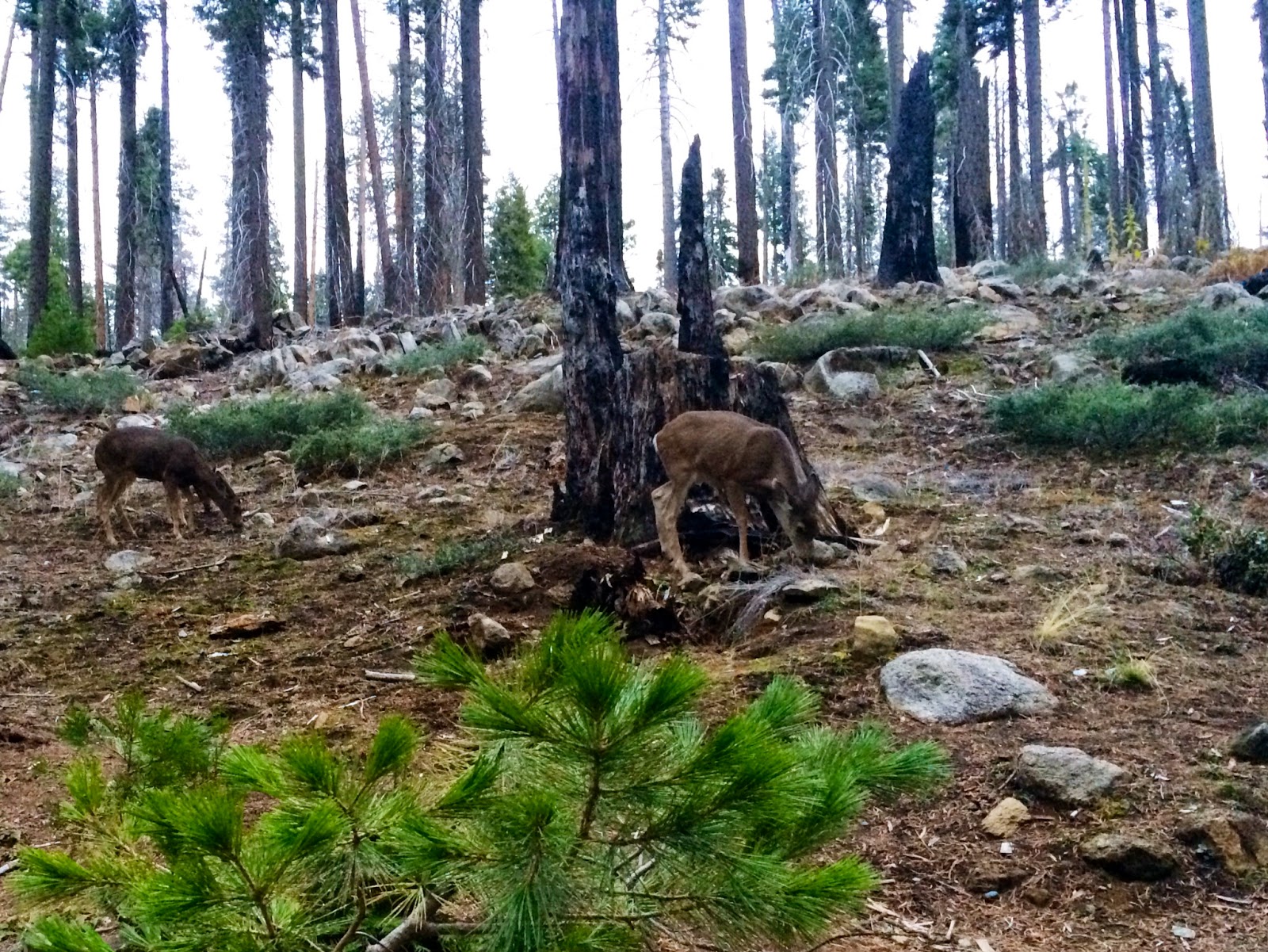 Hard, little flakes started hitting our faces as we clambered over roots and stones to behold the Bachelor and Three Graces before getting out of dodge back to Venice. 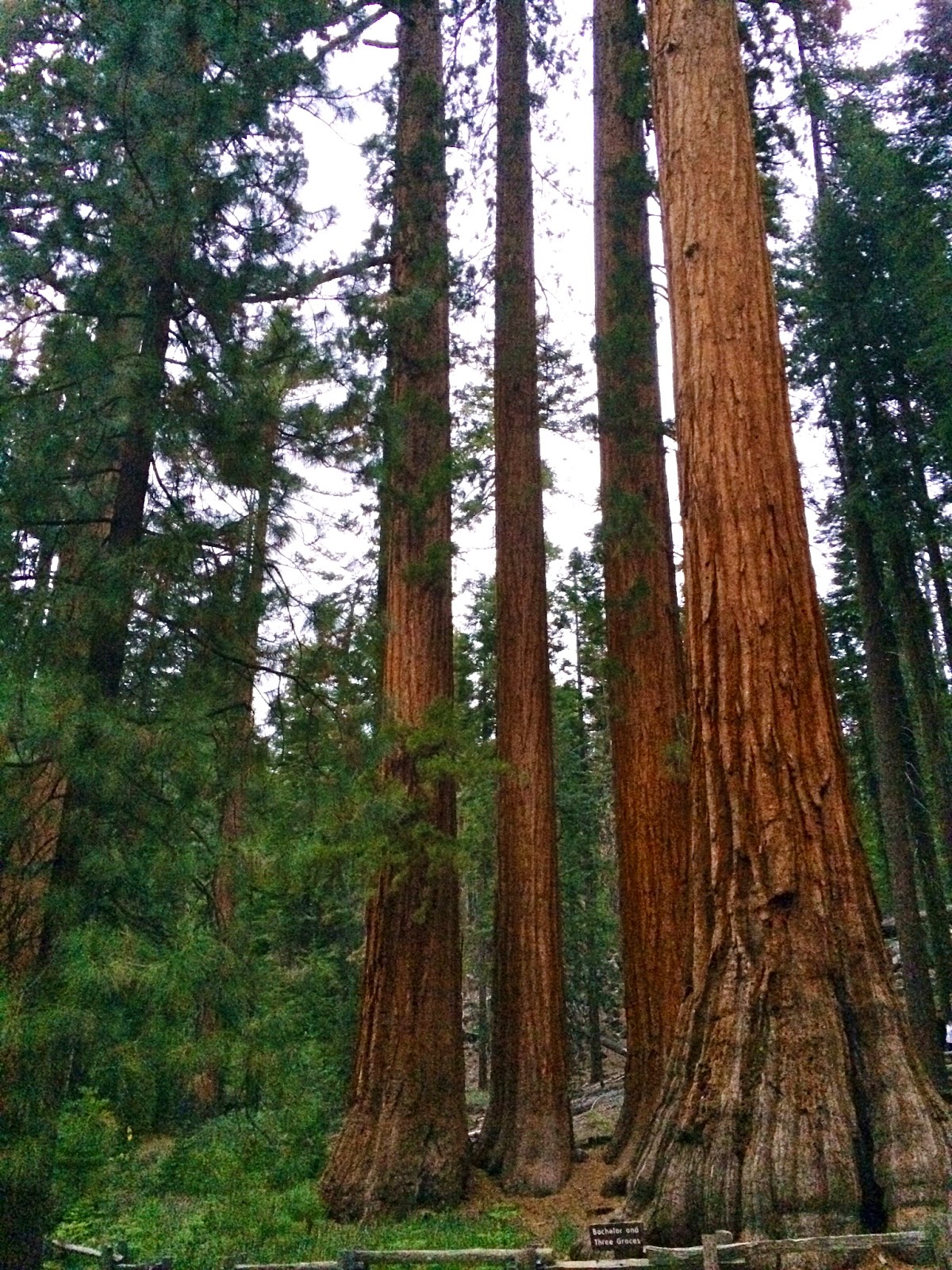 I saw this cool little covered bridge as we left Mariposa Grove, and loved it. That's all. 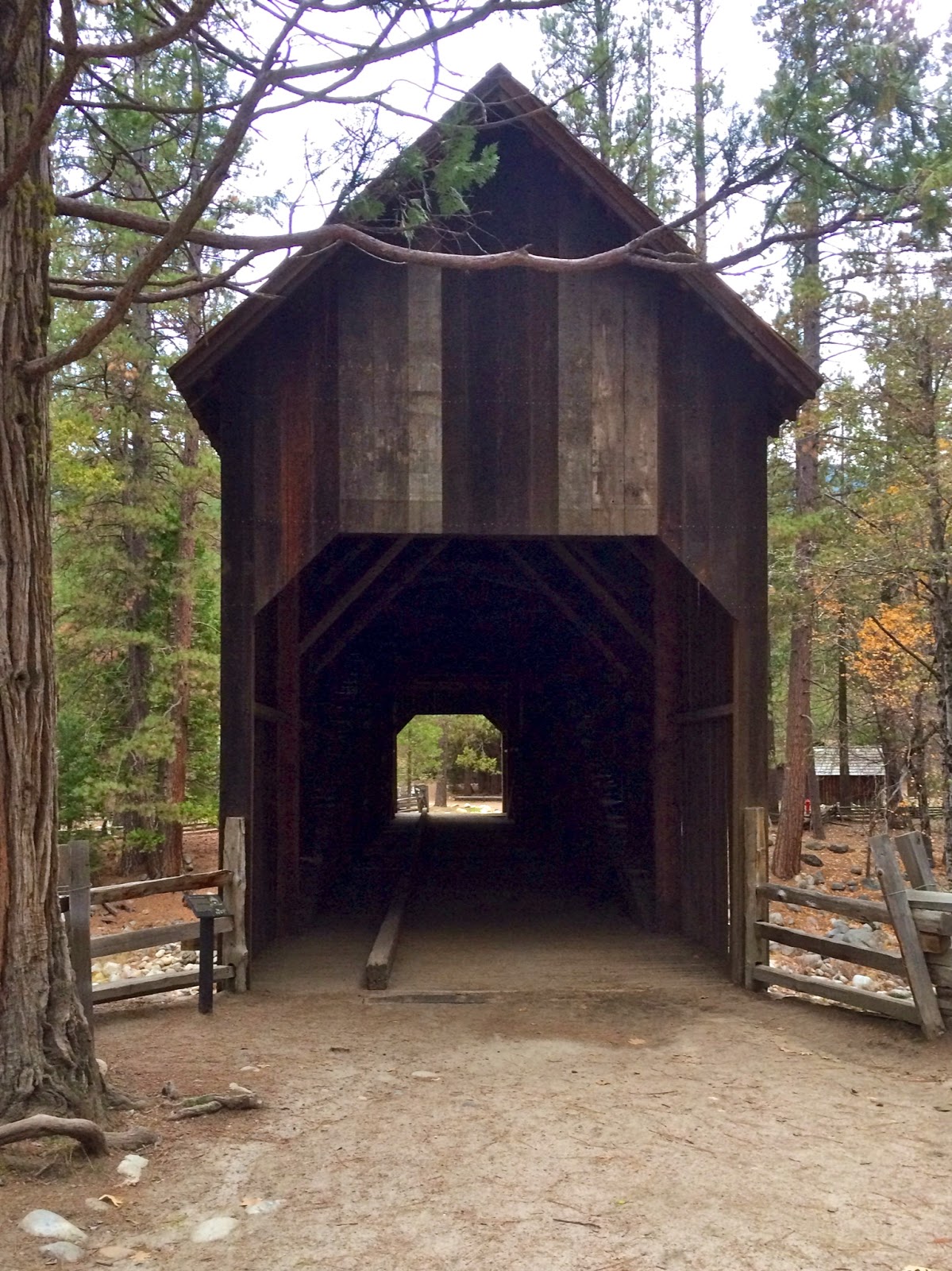 The snow was beginning to swirl and the skies darkened as we winded our way back down the mountainside ... back into T-Mobile airspace and reality. It was a brief, but incredibly welcome and necessary respite from it all. ALL of it - Mass consumerism, racist nightmares and the protests that they demand, jerks, flakes, a real disappointment and dismay with humanity in general, and regular life responsibilities. Gone in one spectacular view.

Nature did as it always does, left us in awe and feeling super thankful that these wide open spaces still exist in our crazy world. Then, when I returned to Venice, I was greeted by our badly needed rain and this spectacular rainbow over us all. 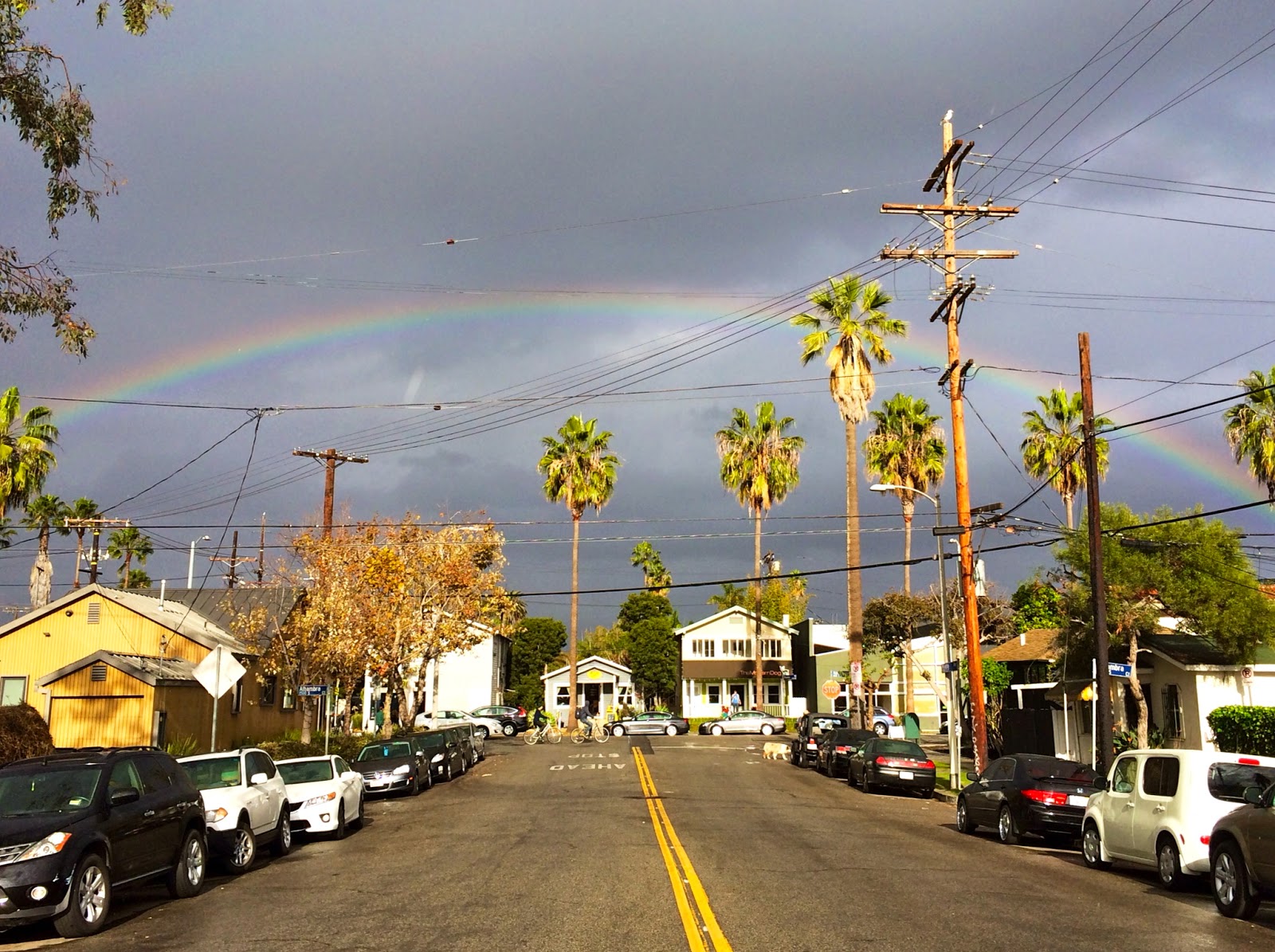 And once again, it's all good. Remember to breathe deeply and get out into nature this holiday season to remember what is truly important - natural beauty and your own sanity. Merry, Merry!