OH, Man. It's been a while since I've had a good, old-fashioned bit of a rant, but I haven't been this upset or disgusted in quite a while. The whole Michael Brown in Ferguson and Eric Garner (a father of six) no indictment MURDERS (among many other similar situations) simply cannot be tolerated. 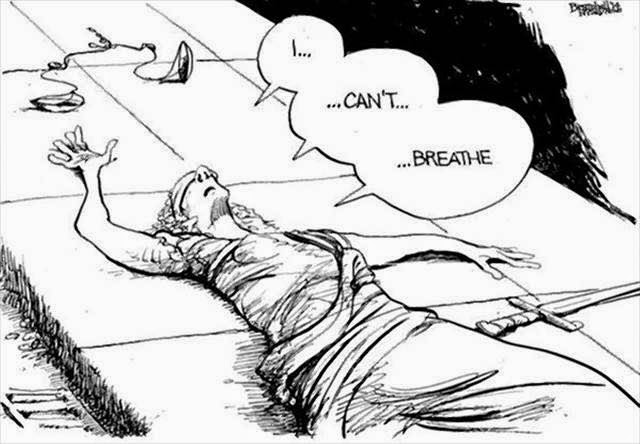 A day after that decision in New York, the number one thing trending right this second was "Elsa doll". If the most important thing to Americans right now is accumulating more stuff for future landfills, then I'm not sure we can be helped ... but we have to try. I'm all about Christmas (my name is Carol for a reason), but the spirit of Christmas isn't about stuff, and you all know it. The Rockefeller Center tree lighting was last night, and I really hoped it would be disrupted, just so this national DISASTER would be forced in viewers' faces, so they can't keep being ostriches about it all. All they said in the telecast I saw a clip of was that there were some high emotions around town. Understatement/sweep under the rug if ever there was one.

Anyone who gives a rat's ass about any Kardashian ass or whatever other bullshit distraction you're choosing over the absolute implosion of our country simply deserves what we get. You should all renounce your citizenship and build a colony in a cave in Greenland or somewhere where you never have to even care about the climate or other people or anything but yourselves and your illogical fears. You can just stare at your screens and live the virtual Wall-E lives you're already living. It seems that film was very prescient. Only those people were probably smarter.

Of course it all comes down to education, be it from books or the streets. It's up to you to learn about your world. Be smarter.

It's once again to haul out the old Einstein adage, "Remember your humanity, and forget the rest." For goodness' sake!

The remaining people can try to salvage what's left, and what those people don't care about anyway - the climate, that humanity ... My stance is really more The United Countries Of The World anyway.

These recent grand jury decisions are pure outrage, and anybody that doesn't think so needs some real self-examination. What the hell in this day and age are we even still having to talk about race for?! We're ALL THE SAME! (Tangent, but the fact that there are tanning salons in this country seems to be a colossal joke now, right?) This is an international embarrassment.

It seems to me like it's some weird payback for all of the people who worked so hard to get President Obama elected, and all that HOPE, that we might have finally put this country's racist history behind us. That we could finally move forward with positive CHANGE. Now it's just like "In your face, suckers!" from almost all areas of "authority". It makes me wonder what the payback will be when we elect Elizabeth Warren (see, still HOPING)? Oh wait, women are already being beaten by their husbands on camera, and the pigs are getting away with that too. These are simply mortifying times.

But they don't have to be. We can unite and refuse to accept this treatment of our fellow citizens, for the sake of us all. Singers need to be singing out. Ball players need to stop hitting and KEEP their hands up (Go Rams, even if I'm a Viking!). Photographers need to keep shooting the REAL stories, even if THEY wind up being the ones indicted (another crime against free speech). Marchers need to keep interrupting traffic. Writers need to keep telling the TRUTH. That's the only way a change is gonna come, the only way it ever has.

As ever, we shall overcome, not BE overcome. We cannot - and will not - collectively lose our breath as a nation. We just have to come together to honestly do what is RIGHT.

Now I need to go breathe. Thanks.