Last Saturday I did something I've always wanted to do ... I went to my very first polo match. The Veuve Clicquot Classic was held at the Will Rogers State Park Polo Fields, all decked out in VC orange. It was a blast. What a perfectly gorgeous day it was to get out in and see hot dudes on fine ponies while sipping champagne and checking out peoples' fancy outfits. 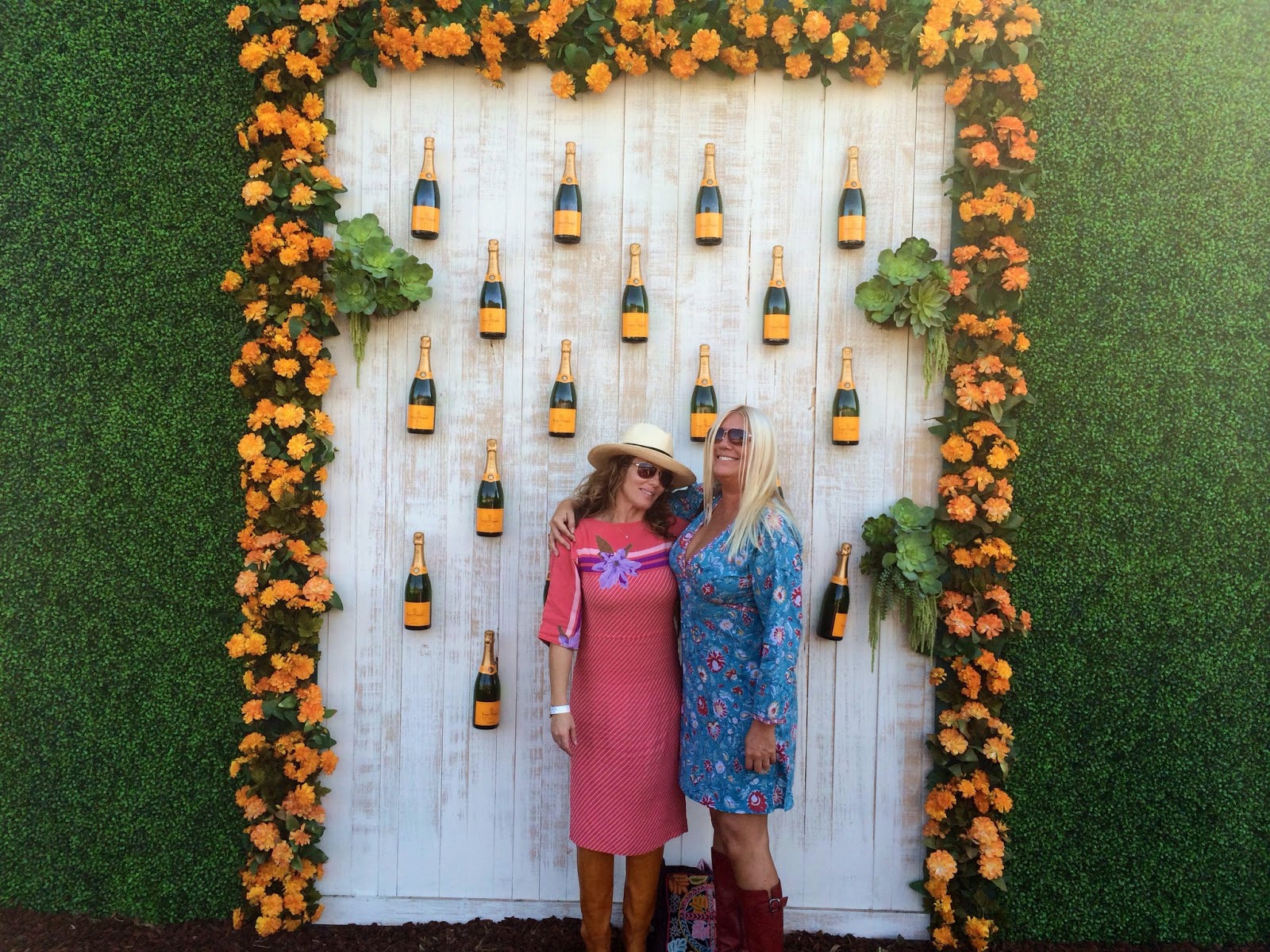 My friend Sally hooked it up as a birthday outing and we sat on the really nice VIP side of the field, where the Veuve Clicquot was everywhere, from champagne bottle chandeliers to the swag they handed out, like sunglasses and fans. 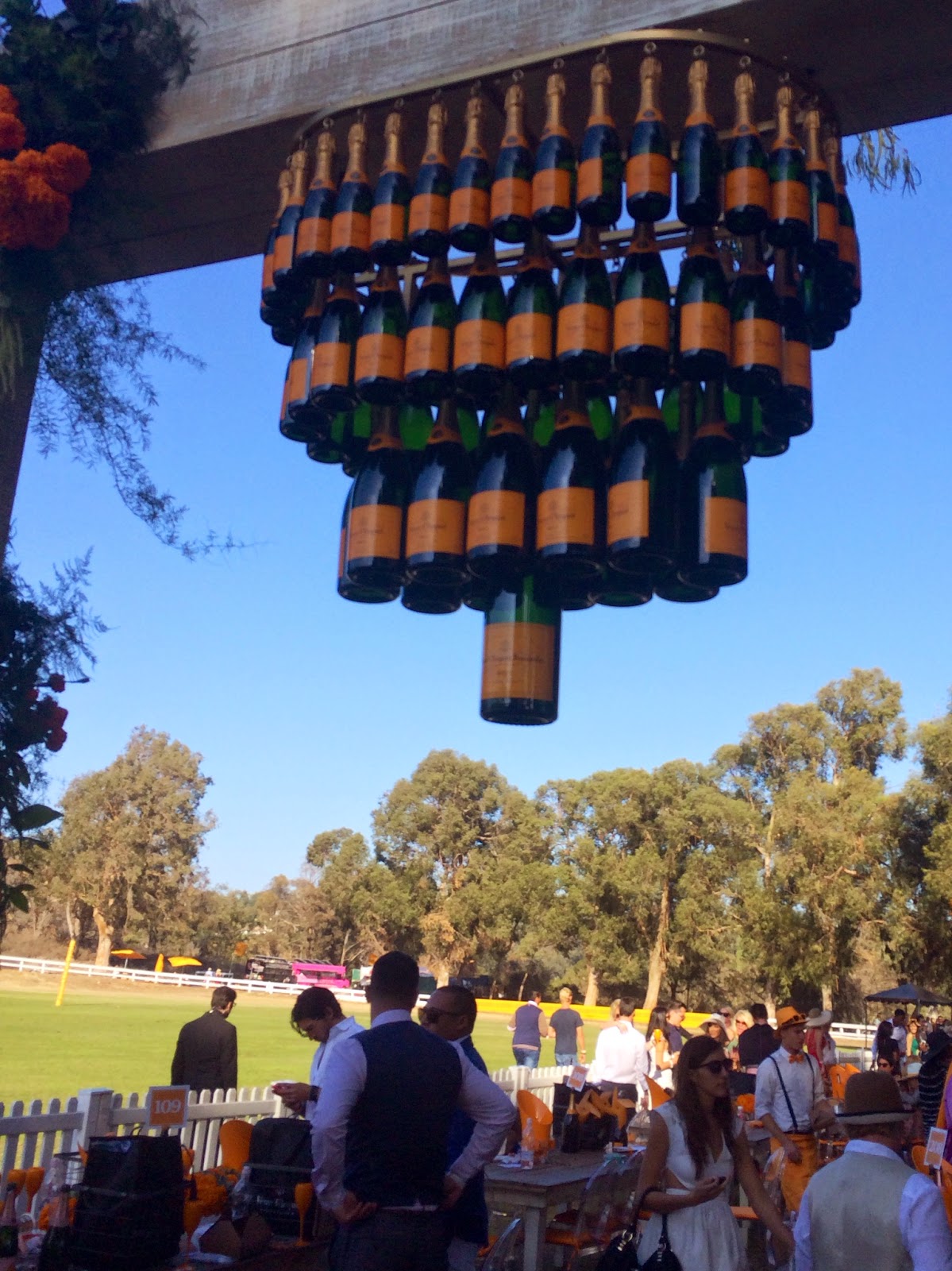 Ladies wore big hats and men wore pastels. There were many, many dresses I coveted, and a whole bunch of fake boobs I did not. I'm not so sure I'm into what the dudes wear to things like this, it's a little fussy for my men, but I get it. The drag was that VIP and General Admission are on opposite sides and you are not allowed to mingle (rather Titanic of them). 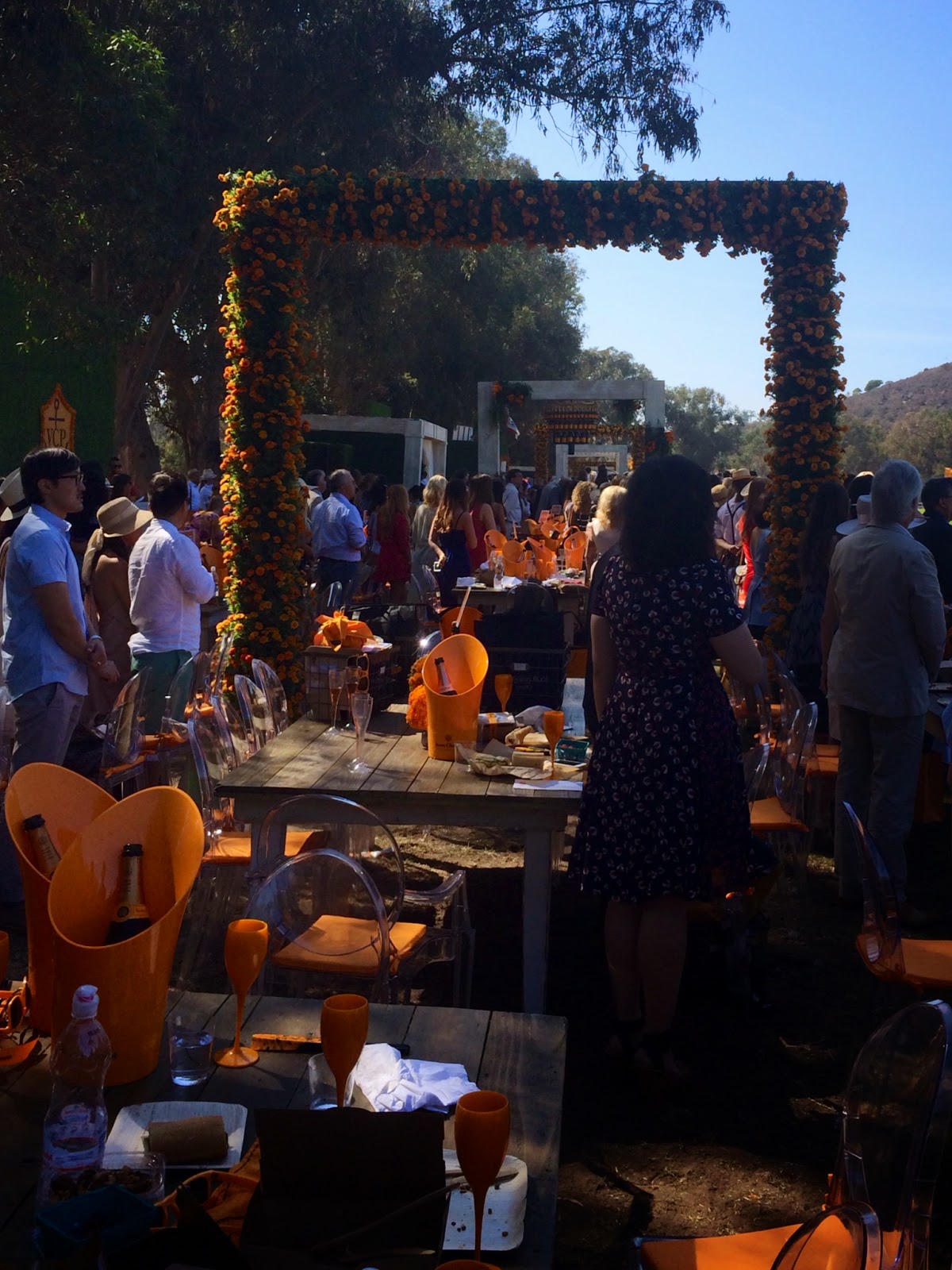 Though the GA did have to sit on the dirt or grass (vs. the tables with centerpieces and waiters on the other side), they had a slew of food trucks that were actually a lot more enticing than the kind of lame Wolfgang Puck lunch baskets we were given. Soggy sandwiches and wrinkly berries type stuff. Plus I had friends on the GA side and the only opportunity to see them would be at halftime in mid-field where staff held a rope separating the sides. Seriously. I'd like to see it be a little more one love. Free to roam if you want to. Why not? 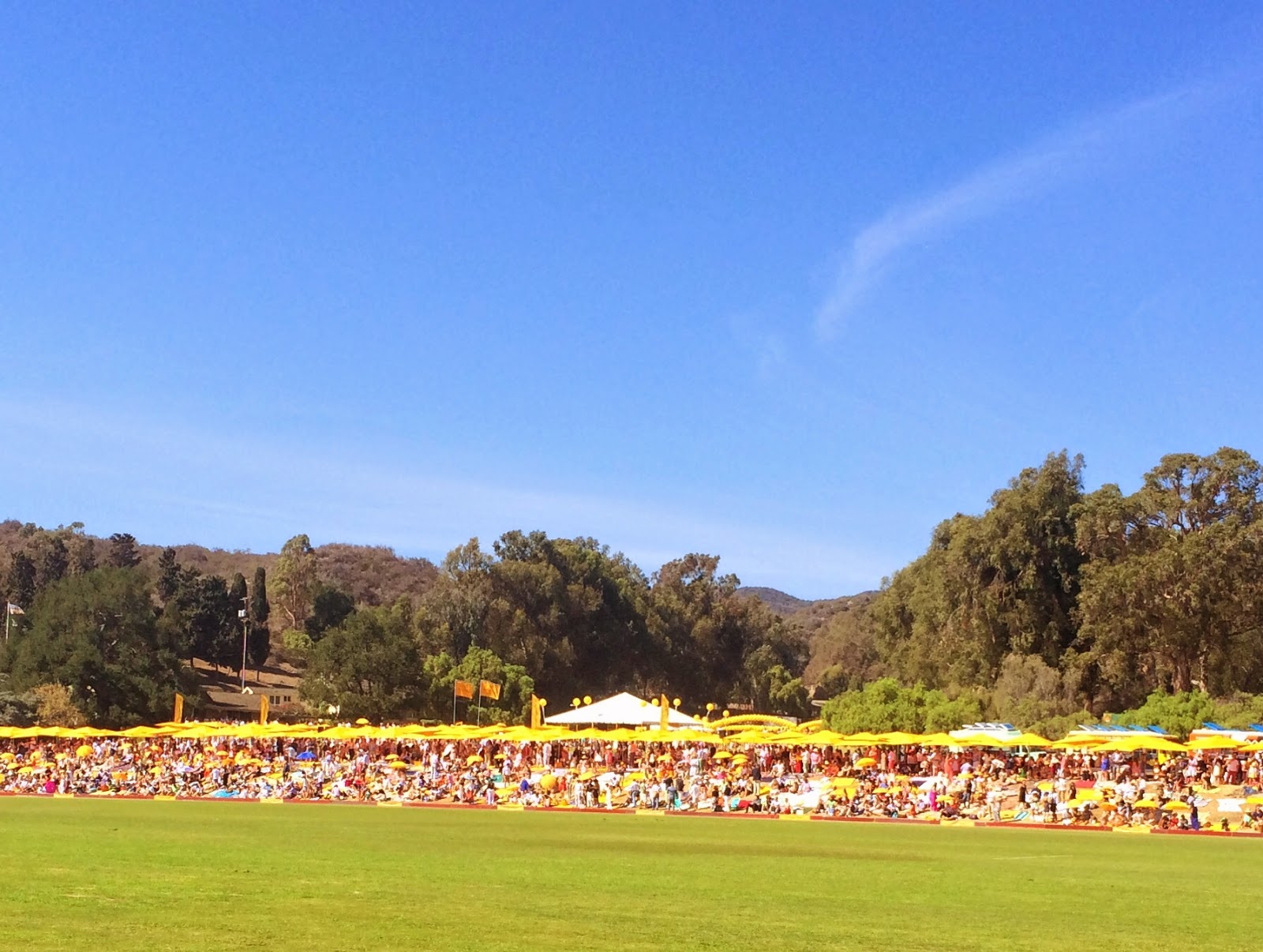 The actual polo match was really great (when we were paying attention to it) ... it kind of reminded me of hockey on horses. One guy would wind up and shoot, and it would go wide, and we'd all moan like in hockey stands. Only this is almost more fierce (as fancy as it is), with horses roaring down the field and guys swinging mallets ... it's pretty heavy. 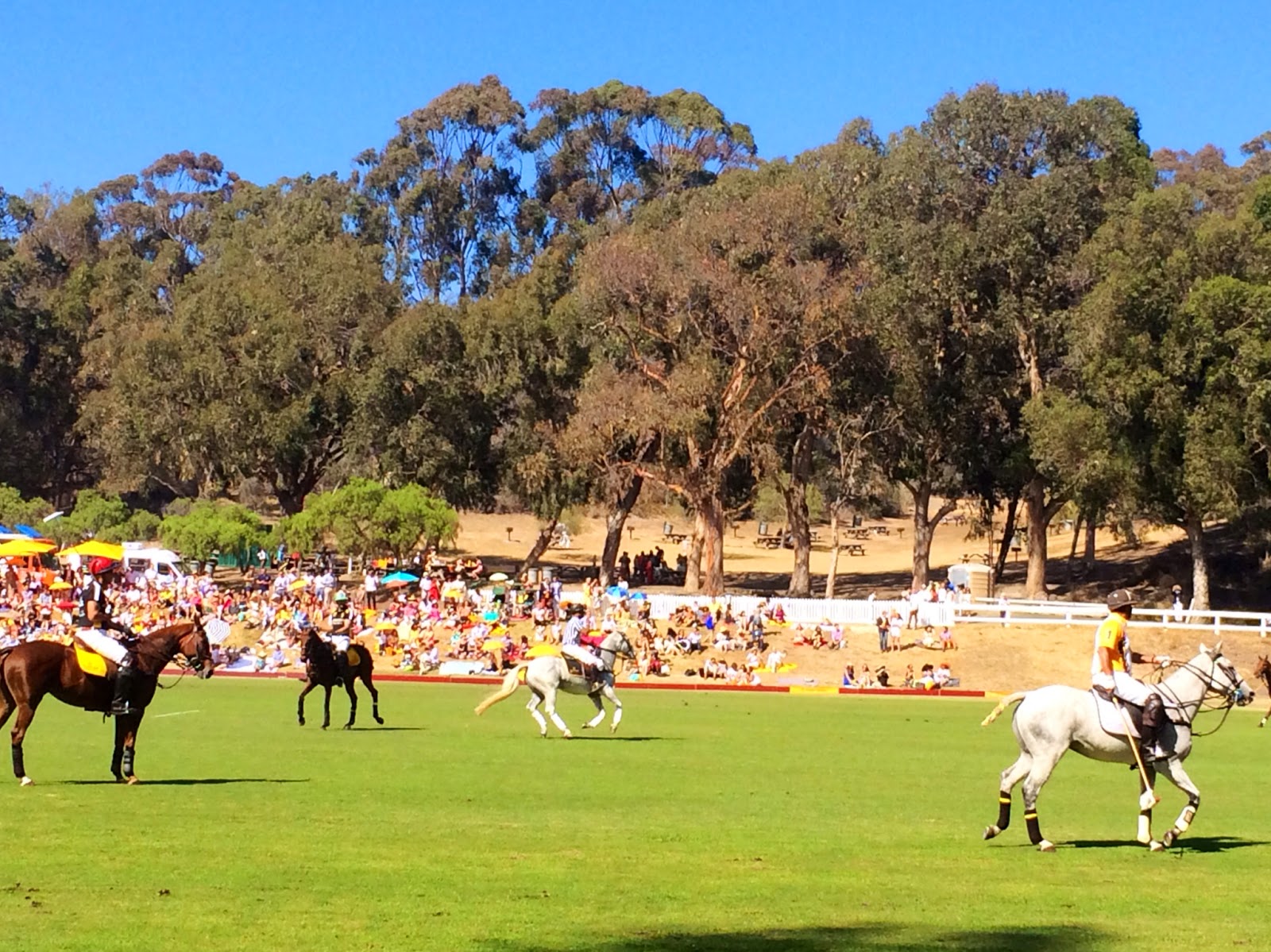 The guys are fun to watch (also like in hockey) and there are certainly polo groupies (many with the aforementioned freaky boobs), that got all excited when the men would ride along the fence and clang their mallets against the slats to rile up the crowd. It worked. 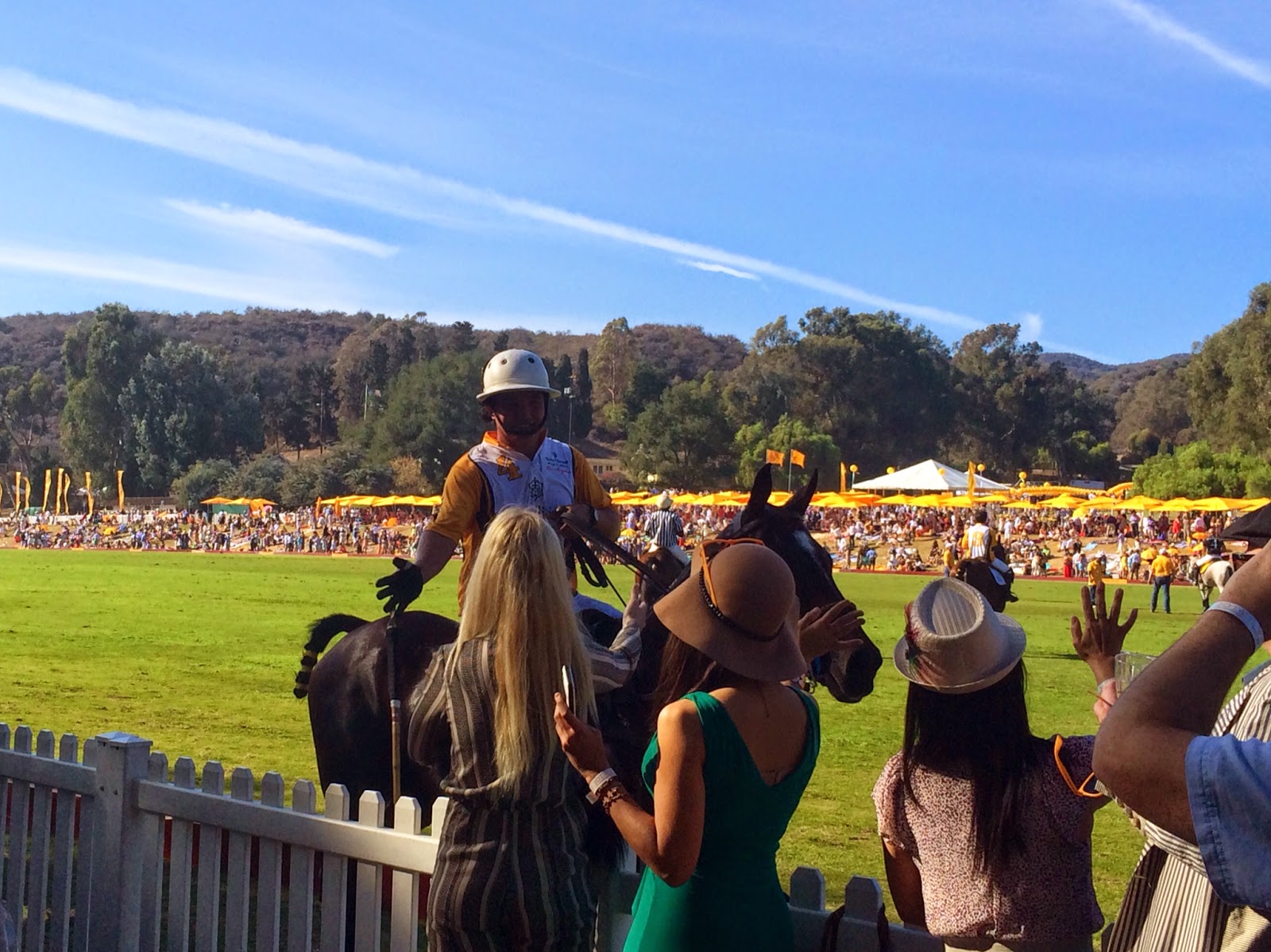 Halftime is the best, because just like in Pretty Woman, you're invited on to the field to stomp down divots in the grass. You're allowed to bring your champagne, so you're just out there having a grand old time, making friends (cool because it's such an international sport, so we were talking to people from all over, not just the Reg Bev Hills sorts) and clinking glasses as you tried to avoid the mounds that were not divots. 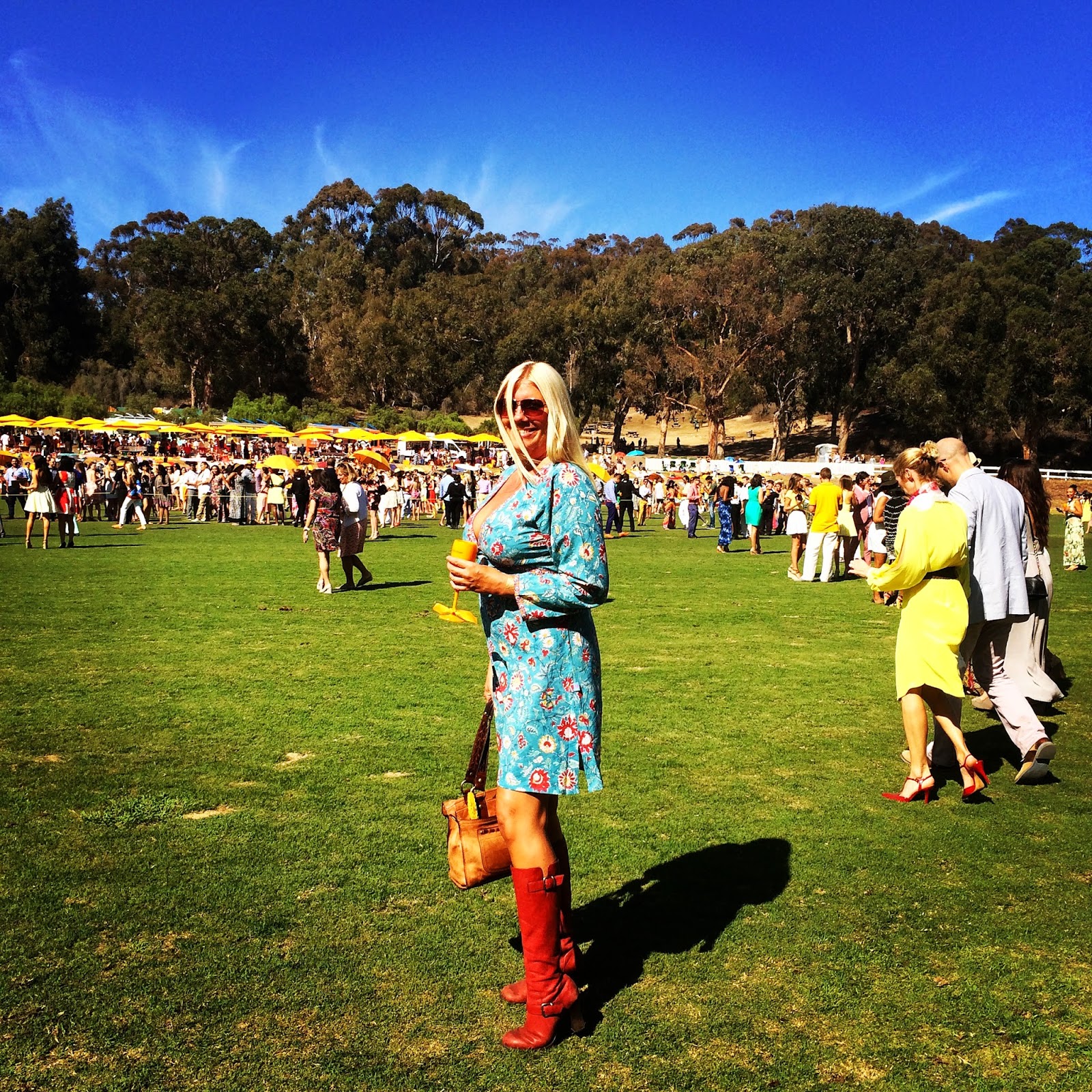 One new friend was so into it, she had a milliner in Australia make her a special Veuve Clicquot big orange and black hat just for the occasion. It's good that it's an annual event ... and also close to Halloween. Her friend made jewelry out of champagne tops, that you could customize with the event on the back. It's a thing. 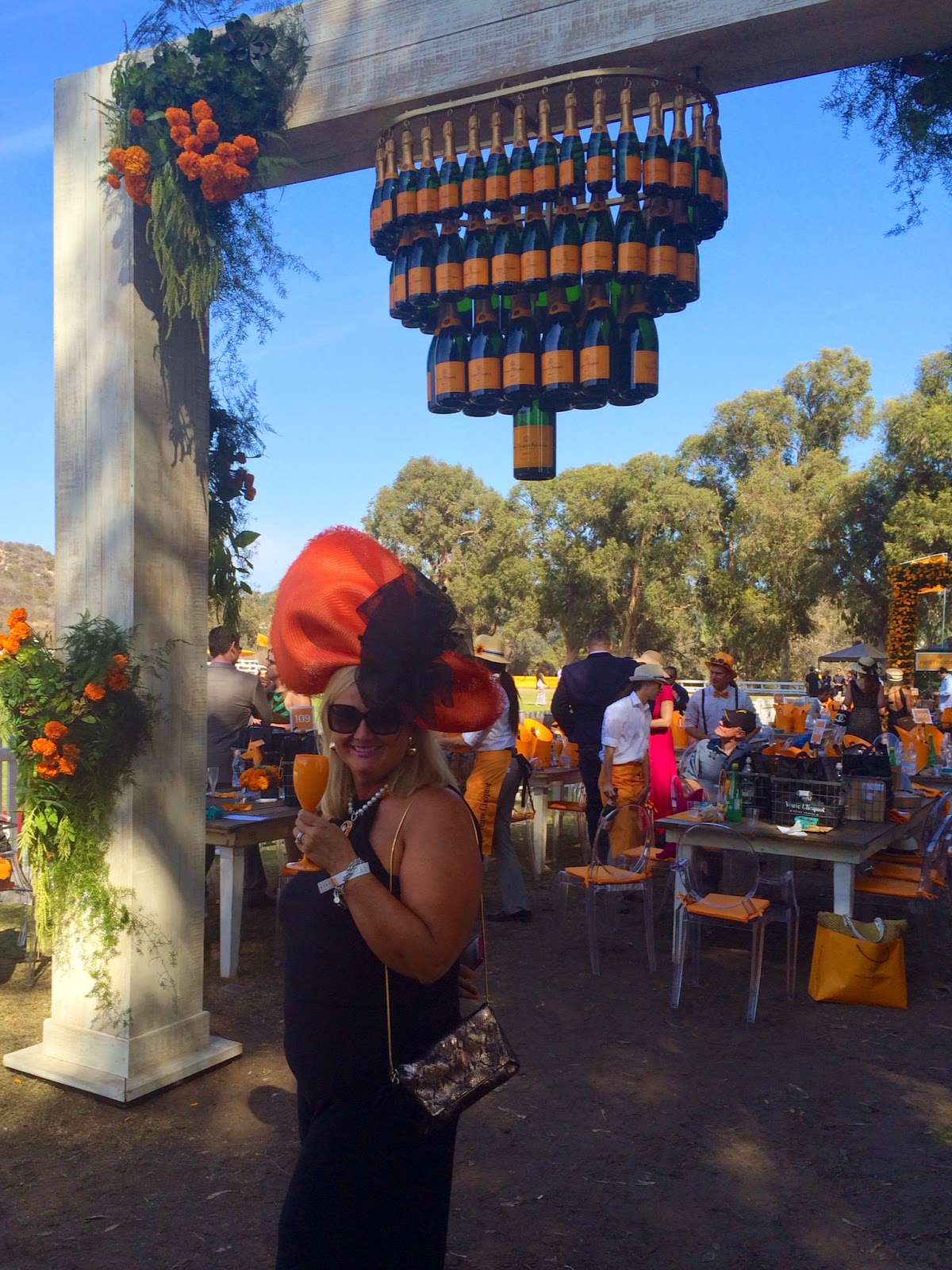 Nacho Figueras, the Ralph Lauren model guy, is clearly the hot shot in the polo circuit, and the P.A. announcer seemed to really have a thing for him .... everything was Nacho this, and Nacho that, and how bad the guy wished he was Nacho (he actually said that a few times before we tuned him out). Nacho's team is called Black Watch, and they're - no surprise - sponsored by Ralph Lauren. They were stomping all over the Veuve Clicquot team, but I think it wound up at a closer 11-8 victory for Black Watch (by that time it was all a bit woozy). 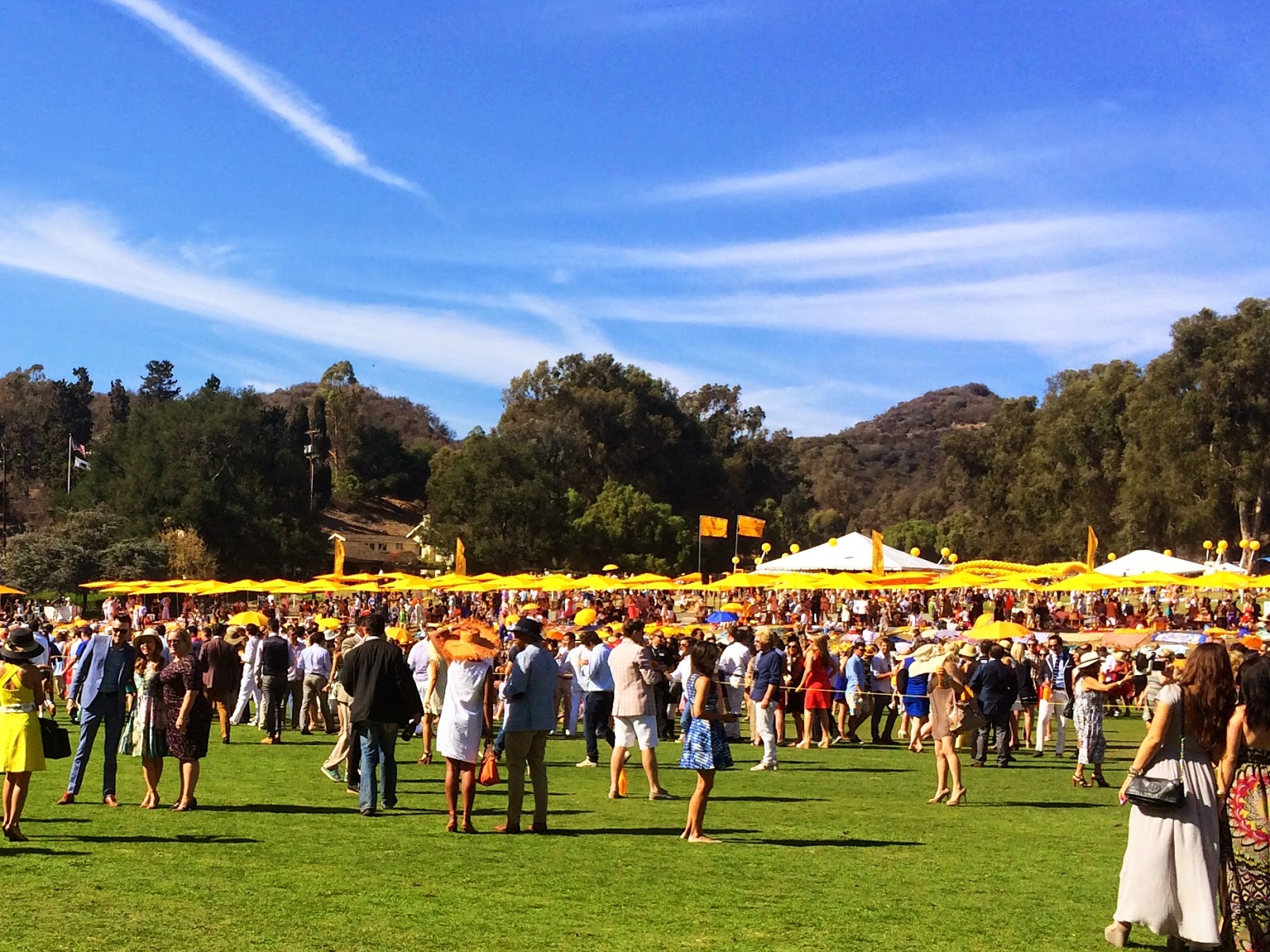 Speaking of woozy ... Men are not that good at drinking champagne. Neither are many of the women that were in attendance. By the end of the four chukka (period) match, it was pretty sloppy up at Will Rogers, believe me. I was happy to have worn my red equestrian boots over the spiky heels many of the ladies in attendance were stumbling around on the lawn and dirt in. 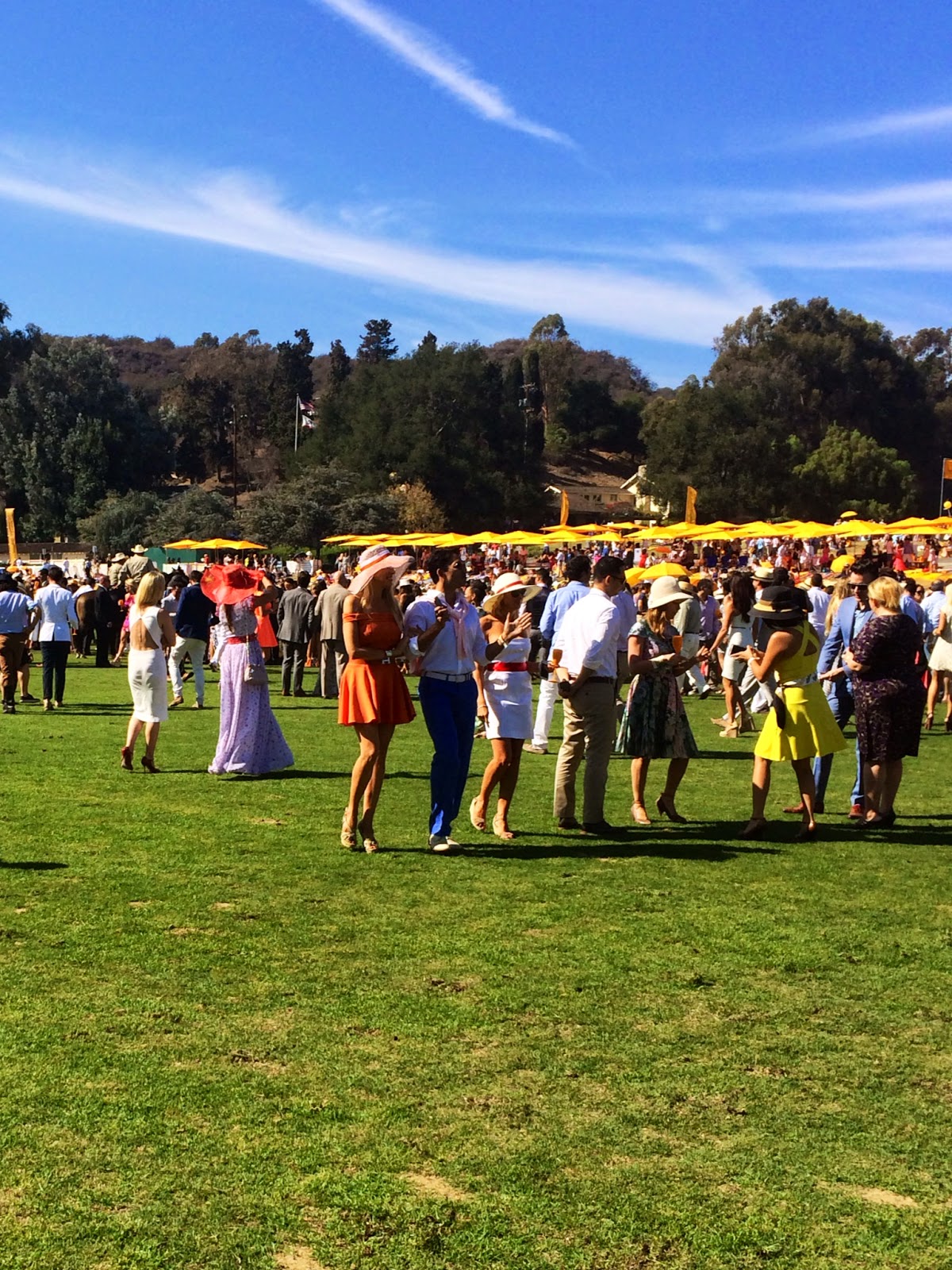 The shuttle ride back to parking was more something to endure. One filthy drunk guy kept going off about how he's so rich, he could own everyone at that thing ... and he almost got gang beat by the time we arrived at VIP parking. It's sad to know that people that utterly obnoxious really exist. But they do, and events like these are their haunting grounds, sadly. It's people like that douchebag that are ruining our country, and I'm getting mad at him again, so I'll stop. But wealthy dickheads - check yourselves. People aren't having it - even your peers. 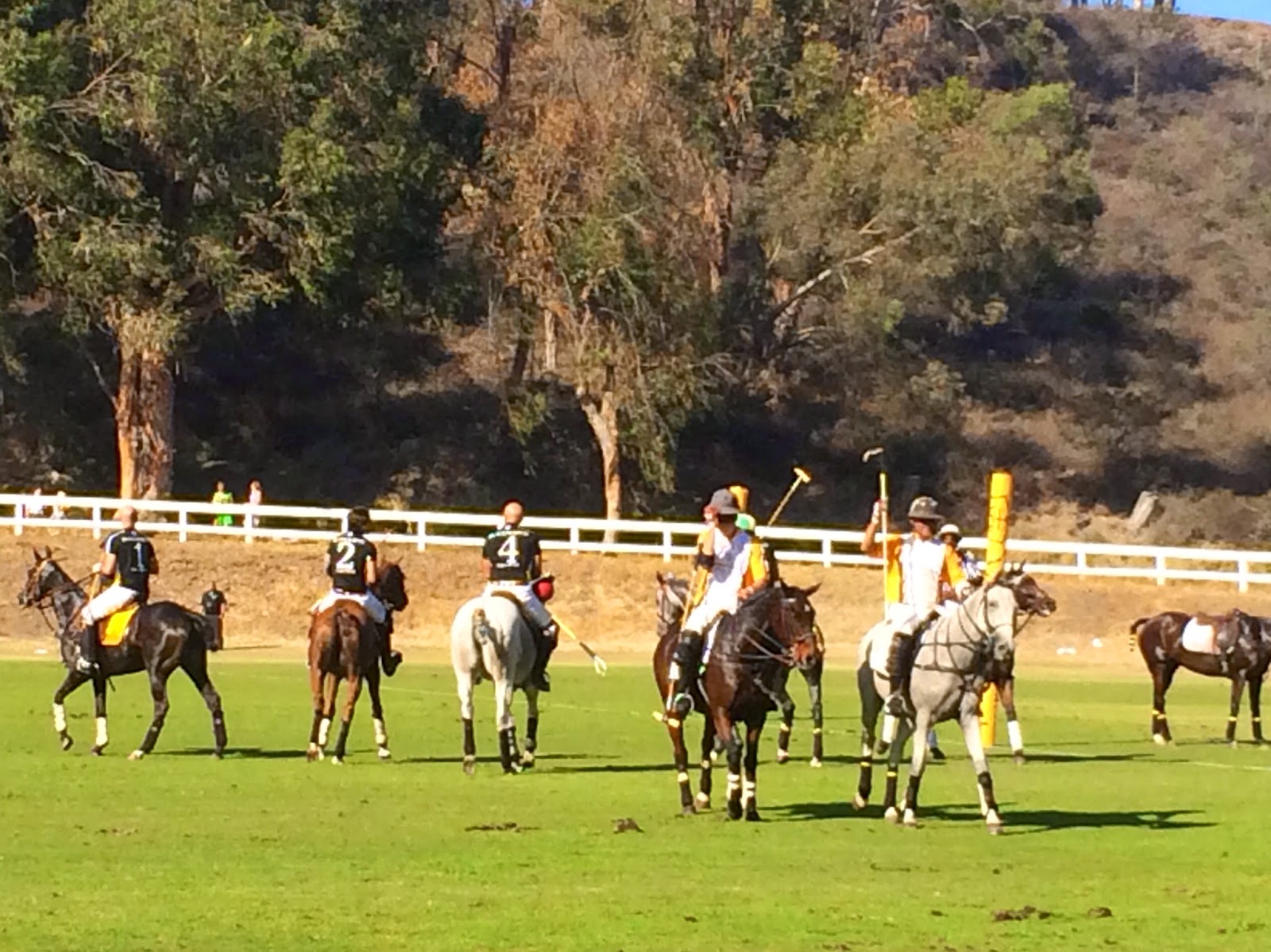 We didn't let that wreck what was a truly gorgeous and decadent afternoon, out in nature, being fancy and learning about the royal game of polo. It's real impressive athleticism on the parts of both the humans and the animals. I'd like to give it a swing. It really is a great day, and rather than thinking "Ok, cool, I've seen a polo match, done.", instead I found myself really digging it, and looking forward to next year. I'm gonna need a new swanky hat.