Animal House has been decking out Venetians for so long that owner, Ronny Kleyweg, can't remember exactly when he opened. "The '70s? The early 80s? I'm not that good at the math." Me neither, but I DO know that I've loved every time I've ever stepped through the door at 66 Windward Avenue, and it has been many. 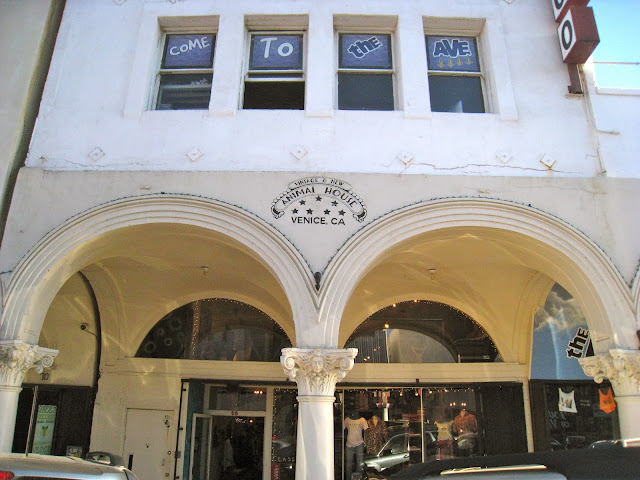 Kleyweg's family came over on a boat from Holland in 1959, straight to Culver City (where his neighbor was Jeff Ho). A teenaged Kleyweg got a job working at Aardvark's Venice location, which he managed for 10 years. This stint taught him all the ropes of managing a vintage clothing business, and he opened his first shop of his own called A-Zoo ("Because Venice is a zoo") in the spot that is now Venice Originals. The current Animal House space used to be an ice cream manufacturing place, and when the owner tired of that, he sold it to Kleyweg, and Animal House has been there ever since ... over 30 years now. 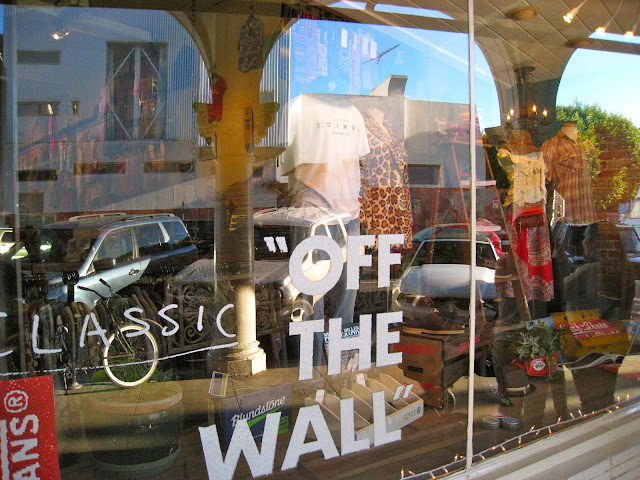 Back in the 1970s, it was all about roller skating and skateboarding in Venice (see, SOME things never change!). Kleyweg and his friends, Daryl Hazen and Jeff Rosenberg, used to host big skate bashes, attended by all the celebrities of the day - Brooke Shields, Scott Baio, Patrick Swayze, etc... - and it was all about afros and spandex. Rosenberg had the idea to put the polyurethane wheels from skateboards on to roller skates, and then it all just blew up. Stores like Cheap Skates, and the United Skates of America kept everyone rolling, and Kleyweg even appeared in a movie called, Skatetown USA  that showed off those disco times in Venice. (I'm urging him to screen it at the shop - stay tuned!) 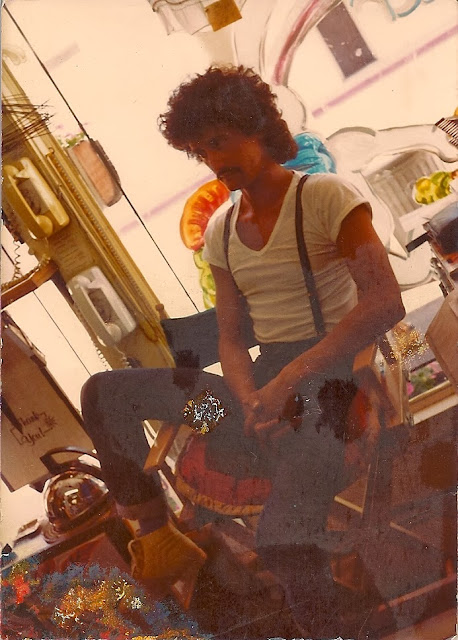 Animal House has always been at the center of the action, a bedrock of the Windward neighborhood and must-stop year after year for loyal tourists that have found treasures there on their previous visits to Venice. Animal House is known world-wide for the remarkable selection of vintage pieces, rare and collectible, from concert tees to original Pucci dresses and Aloha shirts that sell for thousands of dollars. The biggest international customers are the Japanese, who will line up once a month, 40 deep sometimes, waiting for the doors to open, so eager are they to snap up the Americana items they love so much (especially vintage Levis). Kleyweg has already done a lot of the treasure hunting for you, so that when you go through the racks of things, they've already been edited to be just the very coolest pieces. 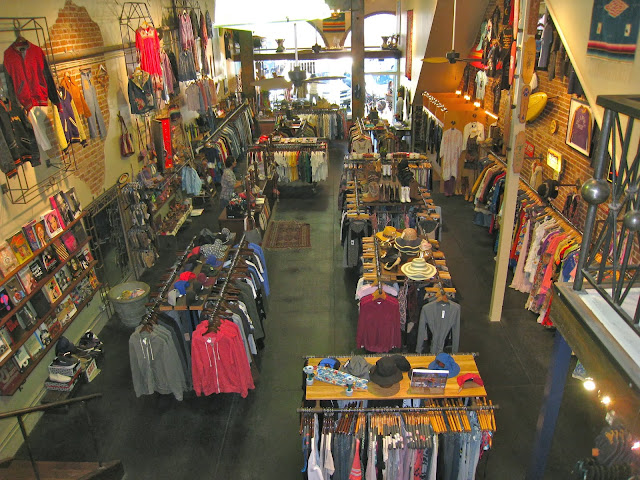 It's not just clothing either. Animal House is a great place to find vintage skateboards, books, bags, jewelry, art,  ... all of it contributing to the laid back beach vibe felt inside the shop, and right outside the door just steps away from the sand, sun and show that is the Venice Boardwalk. The shop has expanded from vintage only to carrying new lines as well. Clark's Shoes, Havianas, Splendid, Diesel, Goorin Hats, Hanky Panky, Vans ... all compete in the contest of when was cooler, then or now? It's ALL cool, if you ask me. 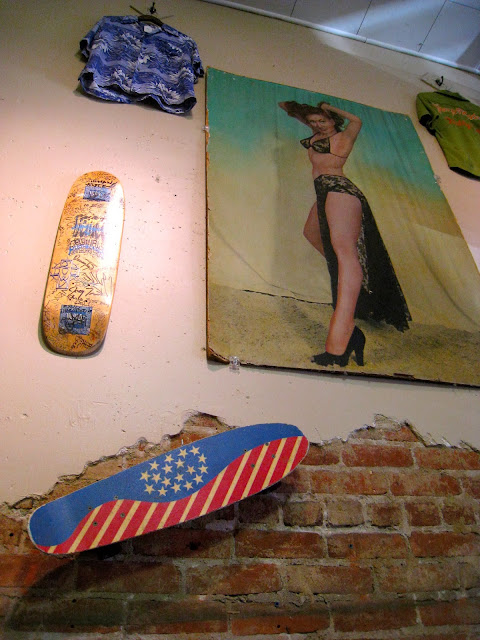 That's pretty much Kleyweg's attitude about Venice too. It's ALL cool. When I asked him about how much things have been changing around town, he shrugged and said, "It's change, it's fine," in the easy-going way that has made him such a valued member of the neighborhood for so long. His two sons grew up coming to the store with Dad, and would stand on step-stools to help ring customers up. The merchants on Windward are friends. Kleyweg and his dear friend, Louie Ryan (Townhouse, Menotti's) and Danny Samakow and James Evans (James Beach, Danny's Deli, The Canal Club) are leading the charge for a Windward Revival, coming together and organizing FUN for the community. I saw Ryan and Kleyweg out on ladders hanging up Christmas lights along the arches the other day, out of their own pockets, out of their own time, because it's just more fun. Animal House has always thrown great parties, just for still more fun (the next one is December 13th, a holiday jam with live music from Tom Freund). 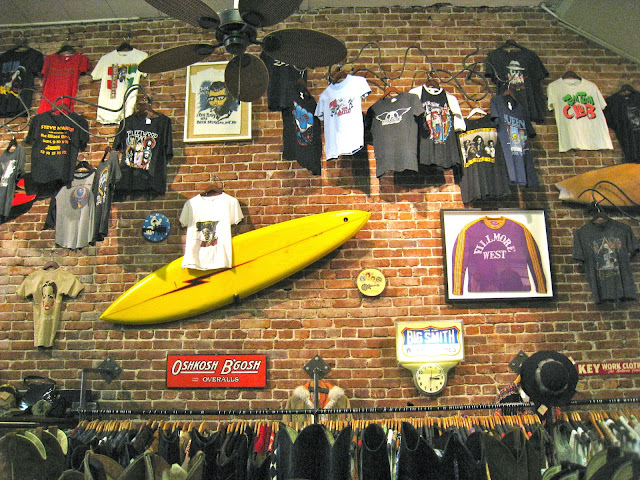 In talking about how much HAS changed, Kleyweg mentioned that often people are relieved when they visit Venice again, and find that Animal House is still here after all these years. "Money does talk, so it's important for people to remember what they love about Venice when deals are being made. Some people don't get it. WE care." Yes, we do. 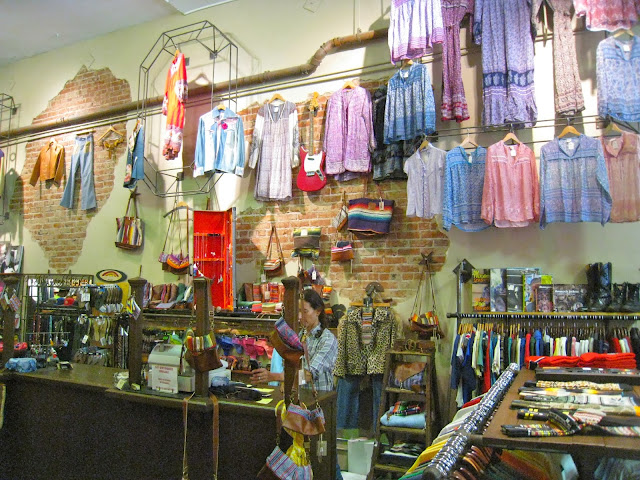 With the rich and famous (Johnny Depp, Brian Setzer, Gwen Stefani, etc etc...) frequenting Venice, the locals are still Kleyweg's favorite customers, creating friends and relationships that have stood the test of time. Gone now are his old favorite restaurants, the Meatless Mess Hall - a vegetarian spot on the Boardwalk that Kleyweg would take all his first dates to, and the Pelican's Catch - a seafood place where The Barnyard is now. He misses them, you can tell (especially the spinach nut burger at the Meatless Mess Hall). What remains is what made Kleyweg love it here in the first place, "The Beach vibe and the girls everywhere!" True enough, and as he added with a knowing smile, "I think it's going to stay special here for a long time."

It will if we can keep people like Kleyweg around. He still loves going to work every day. He loves the hunt for classic vintage finds. He loves how every day is different, and it's all ever-changing. He loves "hanging out with Louie," and seeing what's new around town. Most of all, he loves "the EXPERIENCE of Venice." 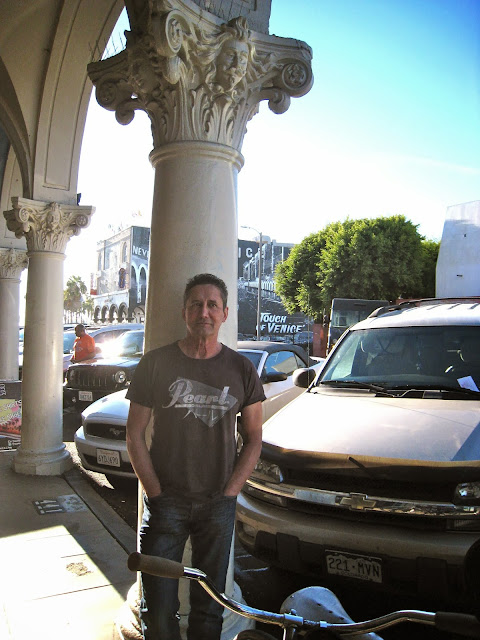 After showing me some excellent photos of himself in his own afro and spandex, and the various incarnations of the facade of the building, Kleyweg and I were standing in front of the shop in the sunshine, talking about the changes through the years. A friend of Kleyweg's passed by and said, "Whatever version of Animal House it is, it's always a landmark." There in the shadow of the Venice sign, standing next to one of the historic Windward columns, with people waving as they rode by on their bikes, that fact was never more true. Thank you, Animal House, for being there for Venice all these years ... and many more!
Posted by CJ Gronner at 12:12 PM