Do you know who Leo Kottke is? I'm always amazed at how many people don't. He is perhaps the best 12 string guitar player in the world, and an absolute icon to my brother and I. We LOVE him. We were delighted to hear that he was going to play at the Smothers Theater at Pepperdine last weekend, and hightailed it on up there to sit and listen and gaze in wonder as he made his one guitar sound like an entire room full of them.

Mr. Kottke is a rambling man, a raconteur, a story teller so random and esoteric that you want only to be his best friend after the 90 minutes or so of time spent hearing him weave his spells. He's very unassuming, walking on stage in his jeans and loafers, not saying a word, just picking up one of his two guitars (6 & 12 string) and launching into his gorgeous, inimitable style of finger picking. 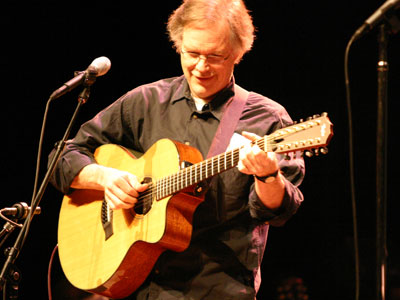 He jammed through a few sublime instrumentals before singing "Julie's House" in his resonant baritone ... but not before telling a story about how a Julie from his youth tackled him and "the night crawler six feet below me felt that kiss." He smiles as he plays with his eyes closed, and his guitar seems to be simply an extension of his body. As he tells his stories, he fiddles about on his guitar without even thinking, and ends up sounding better than anyone else simply doing that. After living just about everywhere it seems, he's a Minnesota guy now, and often shows up with Garrison Keillor on A Prairie Home Companion - another all-time favorite of mine. It makes total sense that they'd be friends - they both like to come off a bit curmudgeonly ("This neighbor invited me to their backyard party ... usually that's my cue to move to a new town."), but the way they find tenderness and beauty in tiny moments exposes their true and warm hearts.

Though his tales tangent all over the place (endearing him to me, who has been accused of same), he always winds it back to the original place, and punctuates them with his stellar playing. Examples: "Dick Tracy's villians had the best housing ... Periscopes, lots of periscopes. Real romance." "Although I didn't live in a propane tank ..." "I was talking to the Bog People, they're FLAT. They're fresh. Weird." "I wanted to play something more portable, and I was willing to both die and give up my gender to do it." People were beaming and laughing through the entire show, none more so than the Gronners.

When introducing his lovely song, "Gewerbegebiet", he said, "The Germans have done for the consonant what the Hawai'ians did for the vowel." Every little bon mot out of his mouth is quote-worthy, and yeah, I'm gushing. Love him. He forgot his slide backstage and called for someone to look in his black bag for his "slide, my capo, defibrillators." He was randomly spouting fragments of sentences at one point, amusing himself, to where he said, "I really don't need you here to do this," prompting the entire house to roar, as they knew this to be true. He played "Snorkel" from his classic One Guitar, No Vocals album, and the man in front of me (and we lucked out into being RIGHT down front) was literally clutching his cheeks, he loved the music so much. His wife looked at him, patted his back and knew it. So touching, I felt the burn of tears spring forth.

Though inspired by everyone from Mississippi John Hurt to John Philip Sousa, no one else sounds like Leo Kottke. He more recently collaborated with Phish's Mike Gordon, which got him on to more peoples' radar, but you should definitely check out any and everything he's ever done, especially my favorite album of his, Peculiaroso. Here's Leo playing my favorite song from that album, "Wonderland By Night":

He wrote one of his biggest songs, "Rings" for a wedding, "And this is all that's left of that marriage." He blew minds with it, ending, as he always does on every song, with the perfect flourish. Everyone leapt to their feet, shouting, clapping, whistling for more. He came back out for one more crazy good instrumental, then simply stood, gave a deep bow, and held his guitar aloft, almost to cede the praise to it.

We want to do a documentary on him, as honestly, there isn't a whole lot more out there that's as entertaining to watch as Mr. Leo Kottke. Turn yourself on to him, so you absolutely will have a life more enriched.
Posted by CJ Gronner at 1:44 PM