Man, I'd rather not even acknowledge the Lindsay Lohan circus in town, but it's a bit unavoidable in Venice at the moment ... and was the TOP news story last night. SAD! She allegedly stole a spendy necklace from Kamofie and Company on Abbot Kinney, and was this morning charged for felony grand theft. Never mind that there is real live revolution happening in Egypt. That our country is still at it in a dumb war. That our Earth's health is at a crucial tipping point in time. That our nation's schools are in the same boat as the planet. That people are struggling to make ends not even meet, but survive. 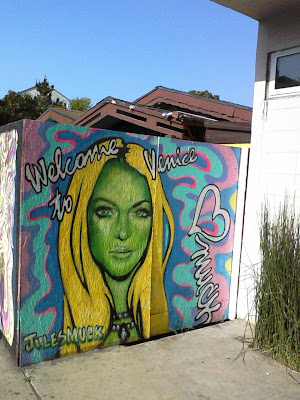 No, the top news story needs to be about a sick young girl that has a ton of problems, and the vultures just keep picking at her. At US - as our brains, and our humanity is what is dying if this is what we think "important" news is.

I was working at Firefly yesterday, when TMZ called up to see if we'd give them any information, as Kamofie had refused to comment further on the matter. The lady sounded genuinely confused and surprised when I said, "We really couldn't care less about this story." In fact, it's kind of embarrassing that this is what people are associating Venice with at the moment.

Last week, the news trucks and paparazzi were fiending around outside the jewelry shop where the shoplifting supposedly went down, and a news lady hit our pal Christophe from The French Market out on his delivery scooter. He was fine, but the last thing our dear friends from The French needed was news of another motorcycle accident. All because people just NEEDED to know what the latest on Lohan was?! Disgusting.

We, the People, sorely need to get our priorities straight in this Country. The celebrity culture that begs this behavior is what makes us look like retarded jackasses to the rest of the world. Let's get a grip, shall we? Massively important stuff is going on every single day, that desperately needs our focus and attention, and we just click the remote until it settles on this kind of drivel, and shut out the issues that, if given our proper concern, could make this world, and the humankind populating it, into really something as glorious as it deserves to be.

Think about it. And send the message that we want to realize our potential. We can be so much better than this.

*Side note: I also cannot stand or fathom the awful, insensitive Groupon commercials. Who's dumb ideas were they? Blech.


**Photo courtesy of Suzanne Thompson (of an ass-kiss mural that did not need to happen).
Posted by CJ Gronner at 1:53 PM