Vanessa Paradis at The Orpheum

If you were looking for the French people of L.A. last Friday night, I'm pretty sure they were ALL at The Orpheum Theater in downtown Los Angeles. French pop star (and wife of Johnny Depp), Vanessa Paradis, was playing her first show ever in L.A., and the Frenchies were very excited. 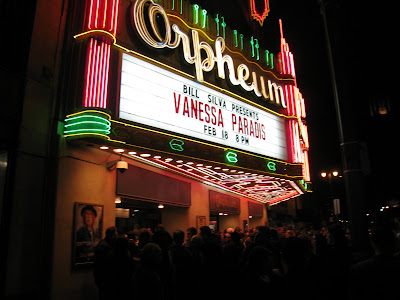 It was a downpour night, but no spirits were dampened as the beautiful old Orpheum filled to capacity, and it seemed like everyone knew each other. It was an interesting crowd, full of hipsters, sure, but also skewing older than I would have expected. There were floor length furs in the house, and berets galore. People waved to one another from the opera style balconies as French tunes played. It was fun to just look around at the gilted opulence.

{Shout out to supercool Bill Silva for our great seats - THANK YOU!}

My friend Sammy Smooth came and found me and the first thing she said was, "Everyone's French!" It really did feel like we jetted over to some big Parisian venue for the night. I even saw lovely Agnes from The French Market, Hooray!

The lights went out abruptly and cheers arose. The giant red curtain parted and out stepped a handsome gentleman with a little ukulele. Hugh Coltman has a dreamy voice, which we soon agreed sounded like a hybrid of Chet Baker, early coffee shop era Jason Mraz, with a touch of Jeff Buckley (a clear influence). Not too shabby, and he earned a fair share of "OW!'s" from the ladies. And a lot of new fans in general. He was a lovely opener for a night that can only be called LOVE-ly.

After a quick intermission/time for one more cocktail, the hall went dark again, the French went nuts again, the curtain rose, and out walked Ms. Paradis to thunderous applause. Dressed casually in jeans, blazer, and a sort of Ice Capades-y top, she floated to the microphone and said, "Good evening, Bon Soir!" Wild applause. "Thank you for having us in your wonderful city, that is a home in my heart for the best reason in the world." Loving cheers. "We welcome you to our little French world," she said in her sweet, delightful voice, and that's exactly where we happily went for the next couple of hours, into her little French world. 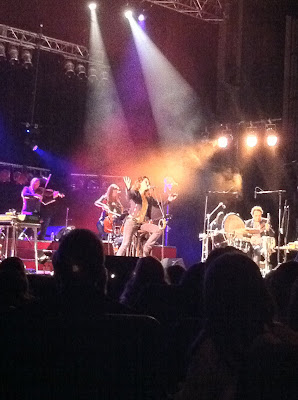 Most of the songs were very Euro sounding ... jazzy, poppy, Moulin Rouge-y confections that somehow never seemed a bit cloying. Most of them were sung in French, and my rusty high school French left me hanging a lot, but I could pick out a lot of Je T'aime's and Les Yeux throughout the evening. LOVE was definitely in the air. A few songs in, Paradis went around and held a little lantern up to each of her backing musicians (there was also a full violin quartet in back). Charming.

I remember hearing Johnny Depp interviewed once, where he said he saw this woman (Vanessa) sitting at a bar, and how he fell in love with just her back. Then she turned around. He was done for at that moment, he said, and this entire audience was in his same boat. Like perhaps Mr. Depp is the lucky one in the relationship. Steph and I kept turning to each other and saying, "Adorable!" She really is, and seems as sweet as she is beautiful. 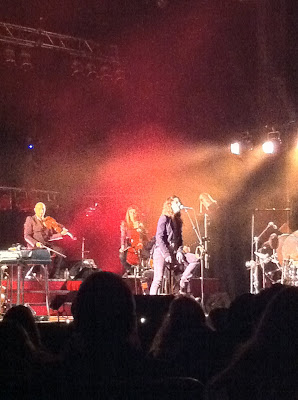 She introduced one song as being "About love and fire" ... sung in a lower voice, sinuously dancing while sitting on her stool, it was super sexy. The whole night it was either crazy yelling and cheering or total silence, as the expatriate crowd lapped it all up.

"At least once in your life, preferably at night, in the rain, listen to Chet Baker in a Studebaker," advised Paradis as they began the song, "Chet Baker" (strange, as we were already thinking about him due to Mr. Coltman). There was an "Ooooo, Ooooo, Oooo" chorus that she asked everyone to sing along with, "It ees so good for your stress!" Indeed, there was zero stress felt the entire night. 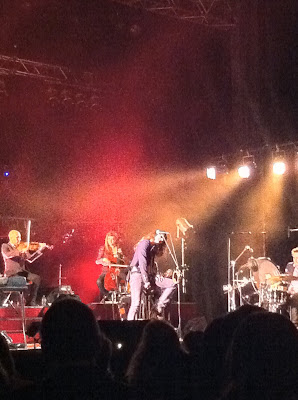 The night built up beautifully, from Paradis on acoustic guitar, backed by the lush violins and cello, for a lusty, feminine cover of Leonard Cohen's "Hallelujah" (which I usually cannot bear to hear by anyone but Cohen or Jeff Buckley, but hers was truly gorgeous, and I'll admit it), to a 50's bopping cover of Sam Cooke's "Wonderful World", to her first French hits, "Joe Le Taxi" (featuring the full house singing along heartily) and "Be My Baby", to a full on French rocker that found her banging on the drummer's cymbals and the Superfans leaping to their collective feet, clapping and chanting for more.

They got a LOT more. Paradis returned for her first encore in a sparkling, twirly dress, and improvised a little back and forth with her keyboard player on a xylophone sounding thing, which turned into Serge Gainsbourg's "La Vague". "WE LOVE YOU, VANESSA!!" was shouted more than once, in thick French accents. Though this was only her second show in North America (New York was a couple nights before), it will not take long for her to catch on here, evidenced by a tool-ish guy in front of me that exclaimed, "What a cool fucking show!" in a decidedly East Coast accent. But he was not wrong!

Paradis danced around on air, then introduced the musicians in the cutest voice ever. The next song was a complete crowd sing-along (we just hummed) that got the entire place up and dancing in their seats. A graceful group bow for another gigantic standing ovation.

And another encore! Paradis took the stage alone with her acoustic guitar, and introduced a Felix Leclerc song "that I learned at 5 and am still singing." It was very folky, and had her fellow French enraptured and singing along again. One more song (en francaise) with her entire backing band, another roaring standing ovation, many thank you/merci's, a balletic bow, and our night in Paris was over. 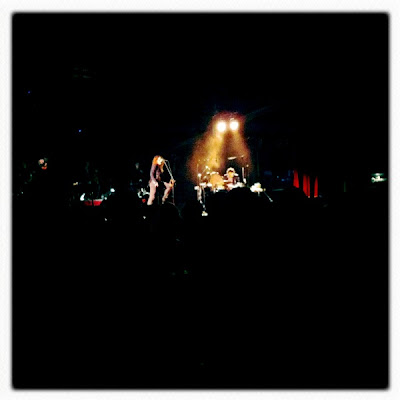 Outside, the rain had stopped, the full moon had risen over the downtown skyscrapers, and there was a French party on the sidewalk in front of The Orpheum. Everyone was beaming, and a not small crowed gathered behind the theater to try and catch a glimpse of their chanteuse leaving the stage door. We didn't stick around for that, but walked to our car feeling literally lighter, and more in love ... with life.

Merci beaucoup, Ms. Paradis ... and WELCOME to your own international, and well-deserved, renown!

*Photos and Video by the divine Ms. Stephanie Hobgood.
Posted by CJ Gronner at 2:17 PM