Venice was a real village this past weekend. A real small town vibe permeated all the proceedings, beginning with First Fridays. The Abbot Kinney merchants finally banded together to get a No Parking permit for the evening, so no cars - or Food Trucks - were allowed to park on the Boulevard from 4-11 pm. It was SO much better, I can't begin to praise the businesses enough. I could actually MOVE down the sidewalks! I could see friends ACROSS the street and wave to them, unblocked by massive food peddlers and their lines. The stores were PACKED - with actual shoppers doing shopping! - proving wrong anyone who thought the dang trucks brought more business with them. 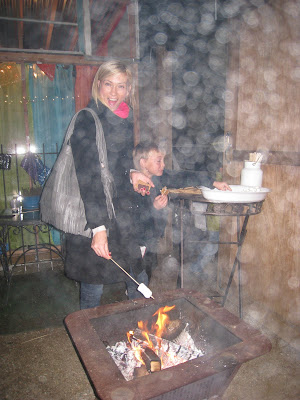 The sole defiant business, touting "We Support Food Trucks" right on their windows was Trim, who must have their reasons, but everyone else I spoke to were SO much happier with the night, and the business they did (and I suspect Trim might change their tune as well if it were a mobile hair salon parked out front of their space). 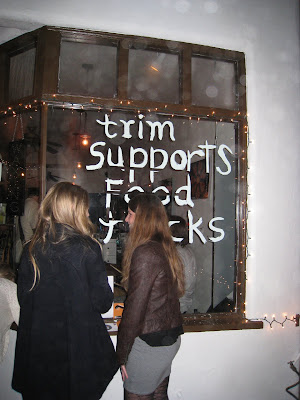 There were still food trucks if you needed to eat off a grill that has no health regulations whatsoever, but they were all parked at The Brig - per usual. The mist made it feel like you were inside a snow shaker the whole night, as we toasted marshmallows for S'mores at a decked out for the holidays Zingara. We got delicious chocolate at Elvino, who were toasting the season with a fun wine tasting. We stood around the fire pit at Robin's Sculpture Garden where we heard live music again at First Fridays (also at Trim! Also Carolers!). We saw MOSTLY people we knew for a change - some of whom said they hadn't been to a First Friday in months (if not longer), so turned off were they by the trucks. It felt great, and neighborly, and VENICE vs. Carny Fair. I even returned to my bike at the end of the night to find not ONE piece of trash in my basket. For that alone, I hope the Merchants chip in every month for the First Friday parking ban ... because it once again ruled. 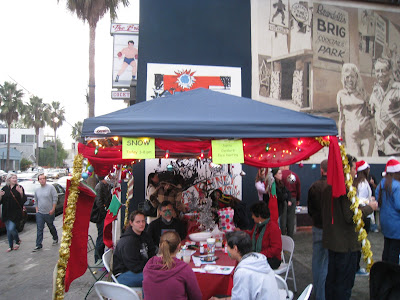 Also ruling this weekend was the Holiday Stroll fun that was centered at The Brig. With REAL SNOW! Perhaps feeling some heat from the locals for all those food trucks normally parked there, Brig Dave lent out his normally packed with trucks parking lot to become a Winter Wonderland - complete with snow! 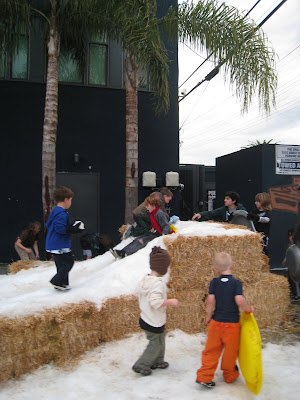 They took a pile of hay bales and covered them up with man-made snow to make a little sledding hill, that the kids super dug (especially since they could be in short sleeved shirts while riding!). One young whippersnapper, who appeared to be about two, kept following me around throwing little icy snowballs at me. I let it slide, as it was pretty exciting. 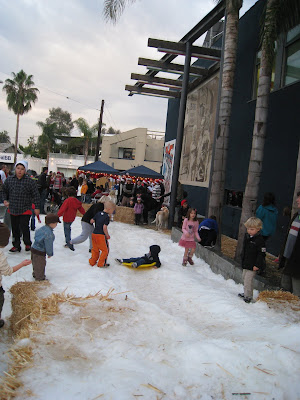 Carolers caroled, there were holiday arts & crafts projects, and even face painting. The very spare room left over in the lot did allow for a couple food trucks to get in and vend some hot pink chocolate snowball things, and hot dogs. Overall it seemed that everyone pretty much had their socks charmed off. "This is so great" ... "Adorable" ... "This was so nice of them" ... "My kids have never seen snow!" "It feels so small town!" ... were snippets of many conversations I overheard, and that is exactly what I love and try to promote about the special place we live. 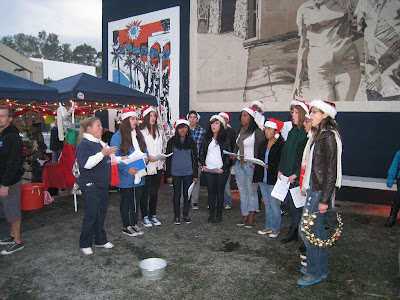 The good FAR outweighs the bad. Whatever beefs you have in your corner of the town, about whatever small picture thing, when you see kids of the community beaming with red cheeks from hustling up the slippery hay slope, and people still arriving despite the rain that began to fall (and melt the snow) - in easy strolls, like "who cares about a little rain, check out how fun this is!", and coming out in droves just to enjoy each other and some frivolity, well, you just get it. 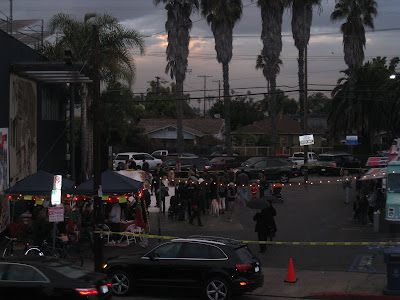 It indeed takes a village, and last weekend proved that we have that, in abundance.