The Shore Erosion project to fix up the beach near the Breakwater is underway, and totally jacks up our morning walk. The entire area from about Rose south to the main Lifeguard Station at Venice Blvd. is closed to anyone other than "Unauthorized Personnel", so they have guards posted at each entrance to the red construction fence to keep you out. This depresses me greatly, but I also get why they have to do it. (A big dip in the beach from erosion needs to be shored up with sand from north of the Breakwater). It's going to take a MONTH!

Yesterday, I walked right past the guard, as I am wont to do in lieu of a hassle in any situation. He said nothing. Today we approached the fence opening, and a new guy said, "Sorry, the beach is closed." I said "What about all those surfers down there?" "It's closed to everyone but the surfers." After trying to trick him that someone was already down there with my board and wetsuit and I was meeting them, I told him that I was here every day, and I was going in, just like the surfers, or he was discriminating blah blah ... (in a nice way, of course). He didn't take much arm twisting at all, shrugged at me, and we sailed on through the fence for our superfog walk.

A band of regular Dawn Patrollers were sitting on the wall watching the waves as best they could in the dense mist, and they hooted and hollered at the guard for being so lenient with us. It was awesome, and we laughed all the way to the shore. 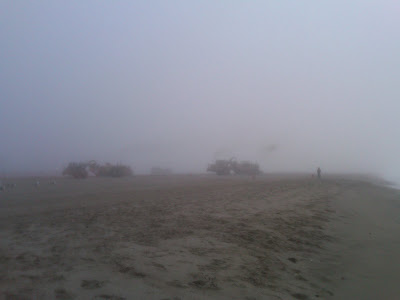 The trucks came out of the fog towards us down the beach, and looked spooky and rather military-esque, like Close Encounters or something. I don't like it. But it's just for a month, I guess. The guard on our return passage was not as much of a pushover, so we had to go the long way up and along the bike path. The silver lining here was that we heard the Native American store blasting its usual soothing soundtrack of R. Carlos Nakai style flute music, only it was Christmas songs! I'm going back tomorrow to get that thing. It was just as surreal as the morning itself.