I stopped by Venicestock 2010 yesterday afternoon to catch my friend's band, Jason Heath & The Greedy Souls, playing in an afternoon slot. While it's got a long way to go before the Venice version of a "Stock" can live up to its namesake (at least attendance-wise), it was a sunny (briefly!) way to spend the afternoon, listening to some great live music accompanied by the bass notes of pounding waves. 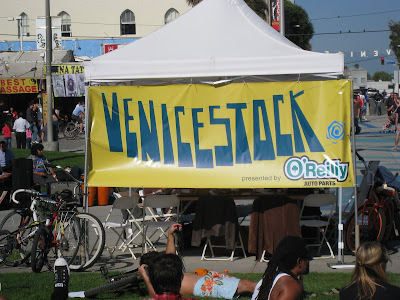 There's something so nice about hearing music in an outdoor setting, and even nicer when it's smack dab in the middle of Venice Beach, and all that goes on here all the time. The Pacific Ocean was in front of the stage, and the Boardwalk was backstage, so there was plenty to keep all your senses occupied. 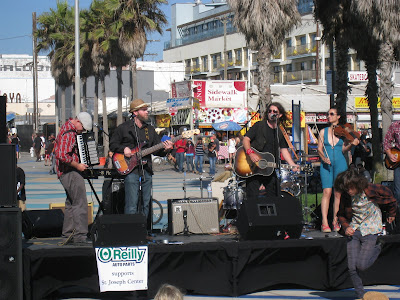 My favorite part of the JHATGS set - aside from their thought-full/provoking folky rock jams - was that it had people dancing from start to finish. And I don't mean nodding along, I mean full body jerks and shimmies! This was my favorite guy. Probably everyone's favorite, for his completely non-caring, non-posing purely joyful expression - the entire time. 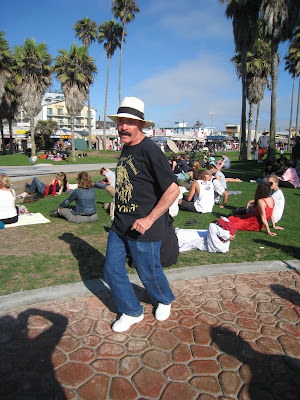 My least favorite guy was this one ... who plopped himself down in the dead middle of the crowd, turned his chair away from the band, and put in his headphones. I was tempted to ask what he was listening to, but then - like him - found that I didn't really care. 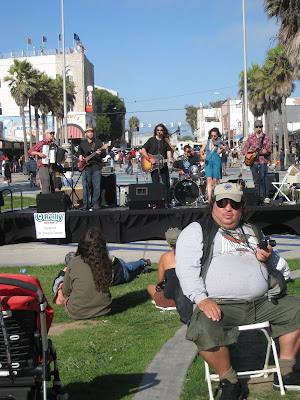 One (probably chemically altered) guy with flowing moves and a completely into it, oblivious demeanor, was dancing so freely down front that organizers seemed to be trying to get him to sit down so as not to distract from the band. Here, however, EVERYTHING distracts from the band, so it's up to the band to distract 'em back - which Jason Heath and Company did a fine job of. But not before a few others in the crowd got up in solidarity with the altered guy and danced along with him, seemingly to prove that merely dancing should not be stopped in Venice. Ever. For any reason. 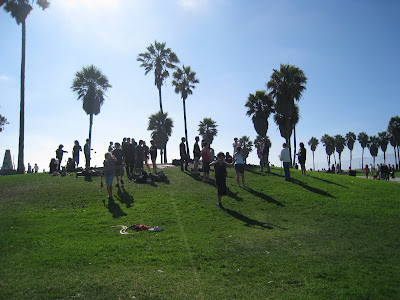 The whole shindig is put on by St. John of local band, St. John & The Revelations, who also played the Venicestock stage ... though I had to head out after my favorite J. Heath jam, "Anarchist Girl", so I can't tell you much more about how the other bands got down. Other than that they did, and I could hear it all the way over at the house warming party I had to head to next. So YAY! (Especially when the proceeds are to benefit the admirable St. Joseph Center).

It's always a great day when you get sunshine and music together outside, and I hope the little Venicestock will continue to grow into its name for years to come.
Posted by CJ Gronner at 3:33 PM