Well, with all the fun and life happening in and around Venice lately, I didn't realize until after the fact that ol' Blogtown is a one year old! Man, time sure does fly. My awesome friends made me this painting for my birthday and Blogtown's Birth last year, and it doesn't even feel like the paint should be dry yet. 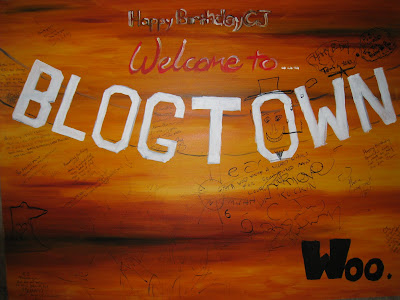 In the past year I've met so many wonderful people and heard their stories. Some people I knew already, but didn't know their background or how they got here. Some people I knew all about and wanted to share their greatness with the world. So many people, places and events, yet I don't even feel like I've made a DENT in the surface of how many interesting characters and tales there are teeming around me here in Venice, California.

There's a little stat data website that lets you see which stories of yours are most popular, and where, and all that, and while The Venice Beach Freak Show, Jane's Addiction, Gjelina, Moods Of Norway, Shooter Jennings, Tom Morello, and all of those stories rank high with me as well ... it's the little ones that stand out in my heart.

Like my Russian boyfriend, Leon. The update on him and I ... is that one day at the beginning of Summer, he completely disappeared. But not just him - ALL of the little old Russian ladies and gentlemen disappeared! No one seems to know where they went or what happened ... making me think ... Hmmm ... I wonder if they were part of that whole Russian spy thing that came to light around the same time?! Maybe they were all deported and Leon had no time (or English) to tell me what was happening? Maybe they found a different spot at the beach to watch the world go by? I think about him every day on my morning beach walk, and regret that I never got the chance to tell his whole story before the KGB (or whatever it's called now) came for him.

There's also The World's Greatest Wino, Bobby Brown, who is now a real friend. We greet each other every morning, and one of my favorite moments of the last year was when my high school bff, Missy, was here visiting with her kids, who wound up getting their picture taken with Bobby. Later on, Missy texted me saying that her daughter said that when she grew up she wanted to "live in Venice and be friends with everyone like CJ is." That was so great to me, that a young girl from suburban Minnesota can GET IT, and understand that there are places and people who are open to everyone and everything, and that it can all get along together. The update on Bobby Brown, World's Greatest Wino, is no, not that he's got a new song to sing (still "Jingle bells, Jingle bells, help me get drunk!" over and over), but that he's a "medical miracle" and believes he has fathered - at 74 - a baby with his young girlfriend in the Philippines. Stop down and see him at the Boardwalk and put something in his cup, as he's saving up to get down there and meet his baby (once he finds out for sure if it's his)! I love him.

Amid all the goodness and fun, there's been all sorts of rumors of petty in-fighting in Venice recently (which I'll soon address) about different little things grown bigger (RV overnight parking, First Fridays, Who is really Venice, etc ...), which makes me a bit bummed. I like to think we're all in this together - which we are. Not just in Venice either, of course, but the whole entire Planet.

So on that note, I'll say that I think my favorite little story of the first year of Blogtown is one of the earliest ones. It is also a fine salutation to kick off a new year ... Good Luck To Us All!!!

*Update: I think the bird might be an American Oystercatcher.
Posted by CJ Gronner at 3:30 PM