L & M Arts opened last Saturday about a block from my place, and it was so great to just amble up the street to attend an opening of such a venue, and spectacle. Valets were running around parking fancy cars, even as a stickered-up VW Bus had the prime spot right in front of the place. Ahh, Venice. 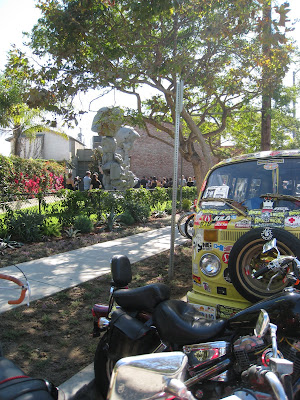 The Sun decided to grace us with sparkle and heat for the first time, really, this year in Venice, and the art crowd was dressed to reflect both the sunshiny mood and bright outlook. Colors! As opposed to the black turtlenecks of only a week ago. Flowers in the hair instead of wool caps! Champagne flowing freely, instead of another coffee you didn't even need but were freezing so got one! 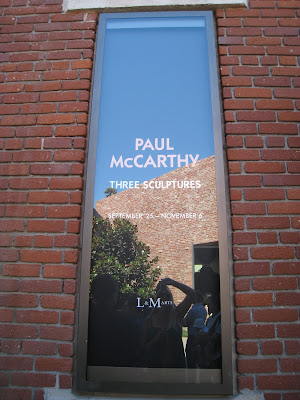 All sorts of Venice artists and characters were there, mingling about to celebrate L & M's arrival to the West Coast (and our neighborhood!), and the bold mind and sculptural talents of Paul McCarthy. 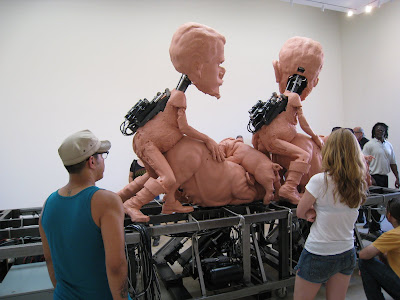 The real crowd-pleaser/statement-maker of the show "Three Sculptures By Paul McCarthy" is Train, Mechanical (2003-2010). It is a couple of huge flesh colored George Bushes anally rendering pigs, fully automated and over and over. Complete with lip pursing, and eye rolling as the George's react to their thrusts. It's disconcerting, and a bit awkward to watch, with perfect strangers squeezed together gaping at the repeated motion of the former President with the pigs. Some will find it straight obscene, and I think that might be the whole point. 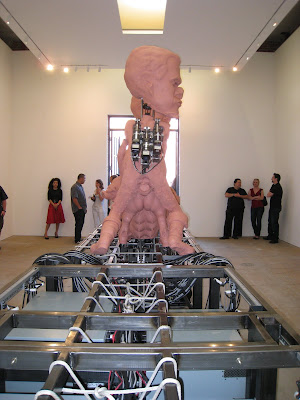 I take our Country itself as the pigs, and that's exactly what Bush was doing to us all - in the skull, like one of McCarthy's pigs is doing - and a lot of the place just stood around gaping, which was, and remains, OBSCENE! Art shaping culture, and society shaping art is unto itself a train.

I hope that by us talking about all of this anew because we looked at this sculpture may bring new attention to the fact that the Bush/Cheney regime is still walking around, free as they may please, speaking for fees, and that's exactly what is sick and obscene. Clinton being persecuted for a lying about a silly blow job is obscene, when you have these crooks laughing all the way to their banks/porches, while sipping on a beer. Not in jail. 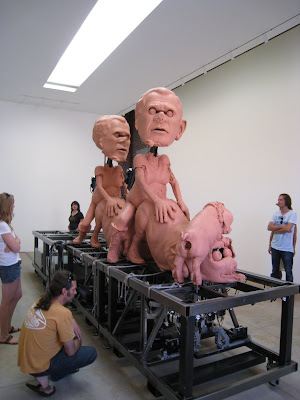 Thank you to Mr. McCarthy for picking at this awful scab in the middle of our nation's face. 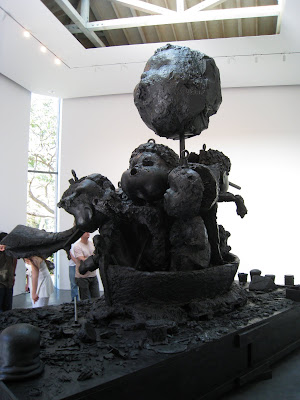 OK. The other two sculptures are from McCarthy's Hummel series (after the folky Teutonic children collectibles of the same name), and are both sweetly innocent and discreetly sinister in the same breath. Ship of Fools, Ship Adrift (2010) is a giant black bronze sculpture of kids on a boat, only they look they've been covered in tar and are decomposing. You really have to see it for yourself to feel the size and weight of it (And you can! In Venice! Right by the Fire Station!). 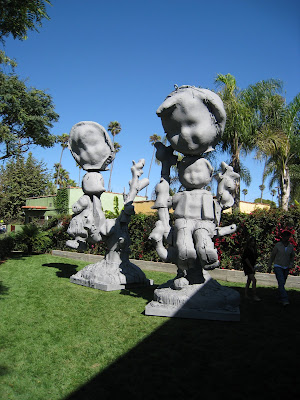 The outdoor statue is Apple Tree Boy Apple Tree Girl (2010), giant kids that at first glance suggest purity, but then you notice the smushed deformity of them, and you gather that the sin of that apple tree has not been kind to them.

Everyone discussed all of this outside on comfy lounge areas or casual picnic tables, as Gjelina catered the affair and kept the wine flowing. 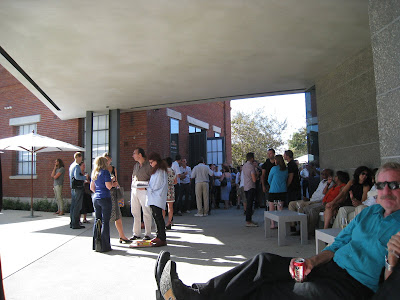 {Speaking of Gjelina ... I just want to give a public shout-out to Chef, Travis Lett, right here and now. That dude made a giant butterscotch pot de creme with sea salt and creme fraiche (aka: the best dessert on the planet) 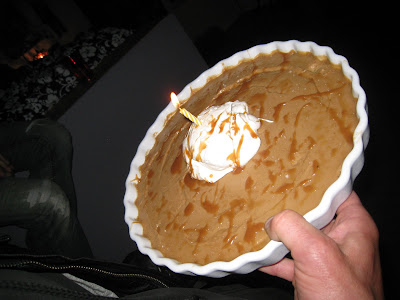 for my brother's and my birthday last month. I said a GIANT one. If you've ever eaten this thing at Gjelina, you know how special this is. This makes him one of the most generous and cool cats around, and high on our list of favorite Venetians. Thanks.}

Usually at art openings, you see the work, greet the people you know, maybe have a glass of wine, and go on your merry way. This one, people were sticking around for. I saw a neighborhood friend of mine (who jumped the hedge. awesome.) and he said, "Well, hoity-toity!" as his greeting to me, but it didn't really feel that way. Yeah, we were sipping on the sparkling all day, watching James Franco schmooze, and listening to Paul McCarthy (the one with the big beard) wax intelligent and insightful about his work, but so were RV's parked right outside and people wearing their Venice Originals t-shirts. I think just by location alone, the place kind of has to remain open and fresh. I've always loved the depot-like building that houses L & M now, and am happy to see how gorgeously they've re-made the place over. 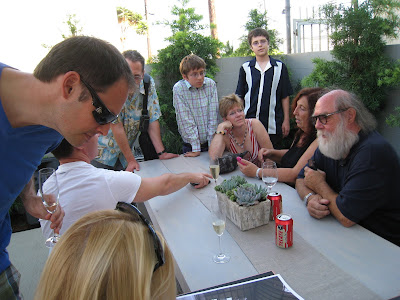 I'm also happy to see people starting to embrace what I like to call the "Cultural Corridor" of Venice more. In the two block stretch of Venice Boulevard where L & M just opened, you also have Beyond Baroque, SPARC, 826 LA, and the Pacific Resident Theater, never mind the little jams that sometimes go on at my own private venue (aka: my place). There's a lot of really great cultural events happening in these spots most every night of the week, and I keep hearing local people say "I've never been".

To that, I say get on it. Because there are bold statements, literary blessings, free expressions and mind-opening works (in almost every medium) happening right in our own back/front yards.

We are lucky people.