Well, that's it. The last full day of "Summer", if you can call the London Fog of a sunshine hand we've been dealt this Solstice season thing 2010, by that inept moniker for what we had. I've now come to terms with it, it's in the books, and I can move on, wistfully. I guess. Everyone keeps saying, "Maybe we'll have a boiling hot Christmas and everyone else will be freezing then?" but that doesn't change the lack of Summer, that I truly feel a little gypped going forward without having had. And yet ... we don't live in flooded Pakistan, or still-devastated Haiti, so Whaaaa to us. We're more than fine, absolutely.

Speaking of Haiti, I saw the Summer of Color lifeguard stations being dismantled and painted over this morning, forcing the reality of tomorrow's Autumnal Equinox to really sink in - up to my knees, in the tide changing sand. Teams of people in UCLA t-shirts were out there in the dense mist re-painting the lifeguard towers back into the pale blue of the normal year. It was kind of depressing to watch, truth be told. The bright flowered and fished panels were said to be going to Haiti to help them have shelter and rebuild with happy, bright materials. But one day as we stretched out atop a purple stand, I looked closer at the panels and saw that they were pretty much made of foam core type, bendy/flimsy stuff that would never shelter anyone from anything other than a living room fort. I don't know what they intend to create with it, but it felt a little sketch to me as to how helpful it could be on its own. Would love to know. 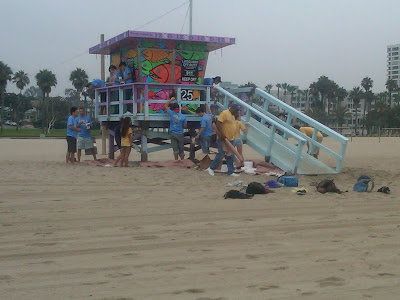 Sigh. So gone are the bright colors of Summer, in all sorts of ways. I dig Fall too, though. It's just different. I was mulling all this over when I went to rinse off my sandy feet and saw a guy on a hill off the Boardwalk going off. Dangerous, real crazy off. I've seen a lot of crazy in Venice, and it's rare that I have felt the kind of menace coursing off of this guy. Screaming with real rage, he ranted non-stop and non-sensically, and looked like he wanted to hurt someone or something. Badly. We steered real clear, and international (we took photos for a few couples on the sand) tourists scattered. And there was no sign anywhere of the 5-0 (Guess we should've ripped our shirts off).

Now, there are some obviously crazy people that you can't look in the eye, or have to entirely avoid, like the guy above. Then there are some also obviously crazy people that you can engage and smile at, and it's harmless and cool. Still hearing the rabid screams of the man on the hill, I rode past a homeless upper-middle aged African American woman talking to herself, and smiled at her. She immediately stopped me and told me in no uncertain terms, "I do not do Men. I've been celibate for 19 years, I'm a nun. I'm not talking to myself, I'm talking to him," and she pulled out a little laminated business card sized picture of Jesus.

She went on and on, but in amongst her rambling, she looked me straight in the eyes and told me a list of things about myself and what she wished for me, all of which I wish for myself, exactly. Crazy, but true. I was mesmerized, and sat there listening to her until Jenny returned to see what had become of me, and rang her bell at me to break the spell. I said I had to go, I was sorry, and bless her. She said, "That sex and drugs lady you see on television at that motel isn't me, that's the OTHER Patricia. You can put me in a room with your man and I won't do a thing, I told you, I'm a nun. And I'm not jealous of your hair either", she tossed in as she stared at it. That one cracked me up, and we parted on cool terms, I think.

Just another early morning along the very edge of the country in Venice, proving that we don't need sunshine or blinged out lifeguard stations to make our lives colorful.

Lesson learned ... let the Autumn roll on in.


*Jenny Evs again snapped the photo on the beach.
Posted by CJ Gronner at 1:11 PM