Abbot Kinney Festival day always feels like a real holiday in Venice. That crackling, electric buzz in the air, some traditional stuff that happens every year, and that rushing into the arms of old, familiar faces that all go along with true holidays.

As I exited a walk street to turn towards Abbot Kinney last Sunday, I felt that holiday excitement. Then I heard a band opening up with the intro to the Beach Boys' Good Vibrations and smiled to myself. What better way to meet the Festival that my friends and I liken to "Venice Christmas"? The good vibrations were everywhere, and it was all happening under a blazing sun that hadn't made an appearance the entire Summer 2010. The day was charmed. 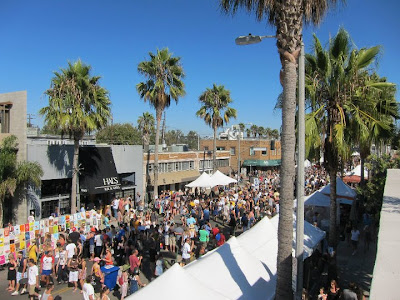 Booths lined each side of the Boulevard, with artisans and organizations selling their wares or ideas. Hand cast belt buckles, sparkly wings for little kids, and wood carved signs saying stuff like "Surf Shack" seemed to be big sellers ... and made by real live locals, not factories, ahem. 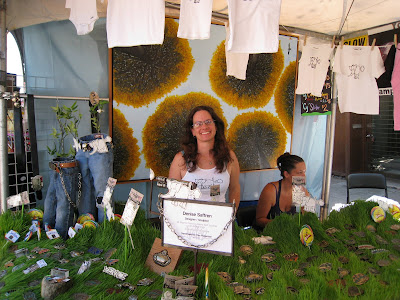 Though I heard a few stories about mega-disorganization during the set-up process, it was all smooth sailing once the whole thing was underway. Everyone seemed to be in a great mood, and everyone I saw was looking good, too. The Festival always brings out the best outfits, again, like a real holiday. 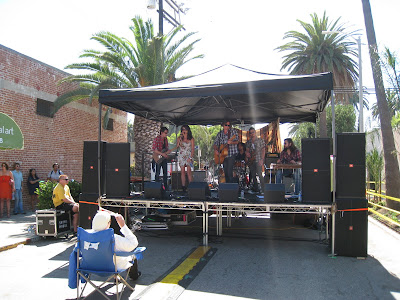 I went to see Matt Ellis's band play, and they were great. So were the Superbroke Orchestra folks playing over at the Kid's Quad. The drag was that I saw a whole bunch of my other VENICE musician friends, not playing, but in the audience. Most every year I have a hard time planning my musical stops at the Festival, as so many bands I know are playing that they tend to overlap. Not so this year. I'm not sure who is in charge of the music, but I kept hearing "It's political", which I hate to hear when it comes to local bands playing a local festival. It was real DJ heavy, which is fine if they're good, but nothing beats a good, local, live band, playing under a blazing sun with their sweaty fan friends raising their glasses and singing along. Whomever books this day for bands ... let's talk for next year. 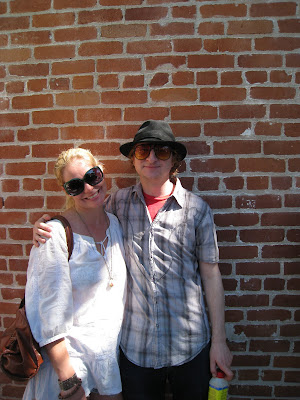 Another weird thing (and then I'm done, as I wholly loved the Festival otherwise) was this year's poster, and the fact that the Abbot Kinney.org people went with some downtown event planner getup, when this place is teeming with creative types. Artists, graphic designers, party planners, bands ... why look any elsewhere?! Pardon, but a third grader could have done the data entry on this year's boredom of a poster (and perhaps did. Sorry, kid.). I know people who collect those posters, as most times they are stunning, and done by someone we know and love. This year's probably won't sell out. Digression over. There were well-used bike valets this year, which I love to see. The food trucks were minimal (you know First Fridays has gotten out of hand when the annual Street Festival seems more in control). There were long lines at all the local watering holes. A spontaneous Rio Carnival type drum line went down the middle of the street at one point, and got everyone yelling and clapping along. 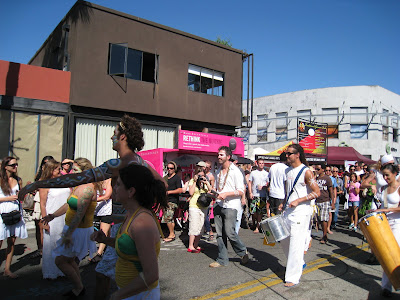 The Spirit Of Venice awards were given out to Jesse Martinez (looking very beat up - what happened?!), Earl Newman (creator of what SHOULD have been the Festival poster this year. Note: though the AK.org site says the "Official" poster is Newman's gem, it was seen hardly anywhere but on the side of The Brig), LAFD Inspector Mike Neeley, and LAPD Officer Heidi Llewes. Tough guys mingled with baby stroller pushers. The Trim stylists looked all hot and cut hair in the street. One wise looking man walked around with a handmade "LOVE" sign hanging from his neck. Outlandish costumes competed with gals wearing almost nothing for attention. As every good festival should have, there was the guy with a parrot on his shoulder. 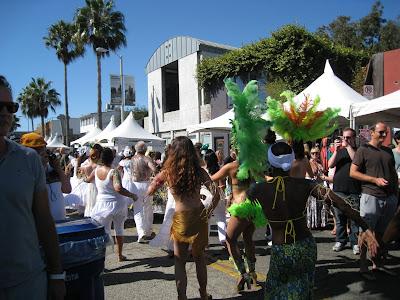 I spent a chunk of the afternoon chilling on the shady side of the street at The Free Venice Beachhead booth. I got to meet all sorts of the cool readers of the paper, who to a person, had only positive and encouraging things to say about how we feel about our Community, and where we want it to go (Cityhood is looking good, if people put their money/actions where their mouths are!). There were some good debates, as well as constant hugs and high fives, from people who sometimes you ONLY see on this day of the year. Like Thanksgiving or something (See? We really should make it an official holiday ... maybe once we're our own city that'll get enacted ...). 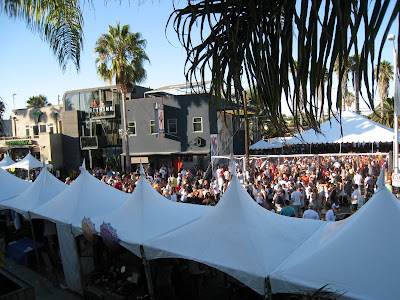 Wrapping up my booth shift, I headed over to my friends' house that overlooks The Brig. The PACKED Brig, which had been turned into an outdoor dance floor. It was sociologically fascinating to watch the spectacle. A clear vinyl fence had been installed, so you could see into the whole throbbing dance floor, but not one person waiting in line on the other side was dancing. Like we've been trained as humans so much by societal rules/norms, that dancing is only allowed on one side of a fence, though you can hear the same music and see people one inch from you, breaking it down. We danced and waved our arms from the balcony we were perched on, to try and get a little anarchic dancing going, and it did work a little. C'mon everybody! Be FREE! 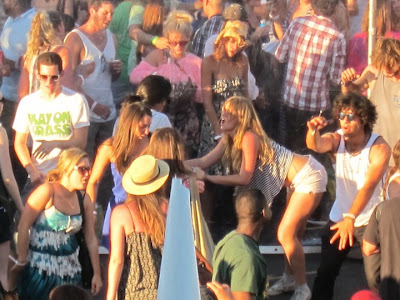 Then BOOM! 6:00 p.m. on the dot, giant trucks began doing a sweep of the street, with the cops following along behind to lasso any stragglers. The dance party was over. Clean up and dismantling began right then and there, and it was up to you to keep the party going on your own. Not a problem. My friend then told me that when they left the house that morning, they'd heard a band playing Good Vibrations, and how it had felt so perfect for the day. "ME TOO!" I exclaimed, and concurred. And really, underneath it all (and the "it all" part of Venice is vast, I'm well aware), that IS what we try to be about and spread in our little area of the Earth. PLUS, a bunch of fine organizations (see AbbotKinney.org for list) will be given grants from the money brought in by the Festival. MORE good.

Good Vibrations, Man. So let's try to remember that, shall we, and keep it going all year long, not just on the holidays. Drink 'em up!


*Photos by me and Jennifer Everhart.
Posted by CJ Gronner at 2:05 PM