There are many times in life - especially in Venice - where you go, "This is like a movie", or "I couldn't even make this up". The place is full of characters, that as a writer, you think, "No one would ever believe this person was real, if they weren't". I'm constantly writing down little moments in my notebook, to use in a script or book later on, as inspiration is constantly everywhere. A good example of this happened the other day. I was on my way home from my morning walk at the beach when I saw my Creepy Landlord pull up in front of my place. If you know me at all, you probably know about this guy. The problems - CREEPY problems - with this person go way back, and our relations lately have devolved in a big way. I recently let him have it in a letter, and seeing him pull up in front was the first I'd seen of him since his receiving it, and frankly, I was not in the mood to deal.

So I went on over to the French Market to get my coffee, and kill some time, hopefully long enough to miss The Creep. I told my friend and waiter extraordinaire, Christopher, that I was sorry I was going to take up a table with just coffee, but I was hiding out from my Creepy Landlord, blahblahblah. I'm usually in and out of there in a hurry, so it's out of the ordinary for me to linger. It wasn't super busy at that moment, so we had more time to chat than normal, and I shared just some of the Creepiness with my French pals.

After a bit, I said my goodbyes to Carole and Christopher, and biked back towards my house. I went an odd way, so I could sneak up and see my place without being seen. When I turned down an alley, I heard the puttering of an engine behind me, but I had my hood up and shades on, so I didn't have any peripheral view, and didn't feel like glancing back and having to deal with something else. Another weird turn by me, another weird turn by the puttering engine. I kept going until I reached the corner where I could see my house. The coast was clear. One second later, a scooter pulled up alongside me, the helmet came off, and there was Christopher, on the delivery scooter! 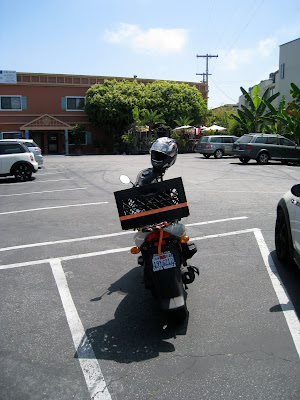 "I had to make sure zat you were alright", he said in his super thick French accent. He'd hopped on the scooter and followed me as soon as I'd left, going above and beyond the call of waiter, into true friend territory. (And he didn't want any credit or his picture taken, so I had to snap this in passing): 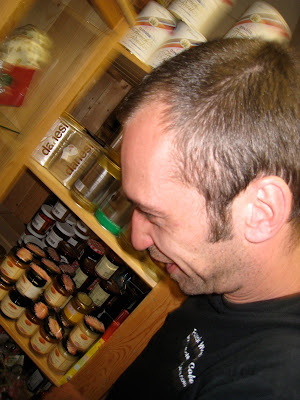 That's what a Community is all about, man. Caring, taking a moment of your own time to make sure someone else is ok, and doing it just because you're a good person, not because you expect anything in return. I treasure that about the relationships I've formed over the years here in Venice. They are legit, and people really do care.

So you see ... cool things don't just happen in the movies, they happen right here, every single day.