Festival Of The Chariots = Technicolor Dreams

Waking up on the first Sunday in August to actual sunshine already felt like a dream ... but when you yawn, stretch, shower, coffee, and bike down to the Fig Tree for our annual Festival Of The Chariots brunch ... the dream bursts into full Oz-like color.

When the Hare Krishna bunch puts on the Festival each year to celebrate their whole deal - I'm actually still not exactly sure what the whole deal is, but they all look extra happy -the Boardwalk in Venice bursts into bloom, like a rare flower that only blooms out once a year. Our favorite part really is watching the faces of the oblivious tourists that have no idea what is about to overtake their walk along, scanning the wares, and the spectacle they think they're supposed to be seeing while here. 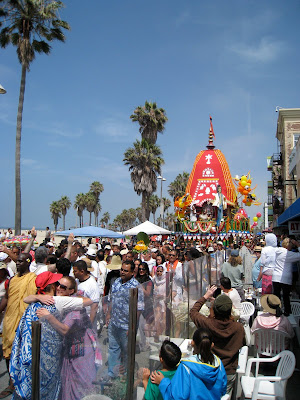 The enormous, brightly painted and adorned Chariots draw into sight, led by, first, the "JESUS SAVES" People, carrying their various protest (?One Love?) signs ahead of the parade, and then, the vibrantly dressed pilgrims of the Hindu faith that dance and chant alongside the crazy-colorful floats/Chariots, with their elaborate balloons trailing behind (Sacred Cow balloons! That better not be found washed up on the shore, Krishnas!). They hand out little gift bags with religious tracts, sun face stickers, and Dum Dum suckers, for some reason, but you always feel coolest if you get a flower tossed to you. Even if the innocent bystander has no idea of what is coming up along behind them, their quizzical stares almost every time turn into delighted smiles, often coupled with claps along, and nowadays, the camera phone outstretched by an arm to catch themselves with all the action. 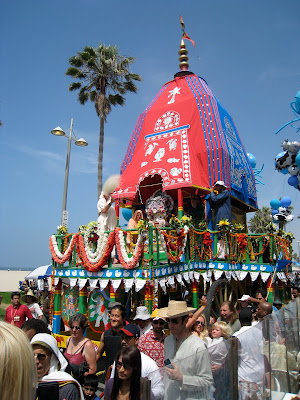 We like our front row seats at The Fig Tree, to view it all from the safety of not being run over by an enormous golden wheel. While sitting there, wearing my Sponto Orange dress, I had the distinct feeling of someone's arm encircling my waist as it all passed by. I turned to see who new had arrived, only to find - absolutely no one standing there. I'm not kidding. We always had our pal, Sponto, there with us at these brunches, and have really missed him at this and other occasions ... but maybe he WAS there, hmmmm? It was just weird. 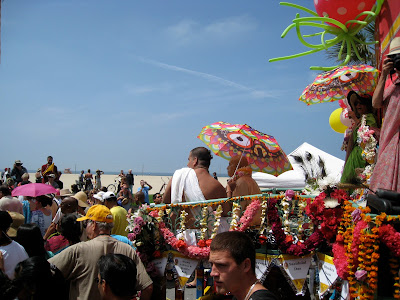 Also weird was when I found out that the little old Lord Krishna dude (that never seems to age year after year of these parades), complete with an umbrella holder, was really a statue. aHA! Trippy. It's a trippy kind of day, really, but all the color (more extravagant this year even, as it was all lit up by the increasingly rare sunshine we so love at the beach) just seems to brighten up everyone's moods automatically. Even the people protesting in the name of their faith - again, such a strange reaction to fun and good deeds - didn't seem as militant as in previous years. We can talk about my religion theories some other time, but I'm all for people getting up and out on a Sunday morning to rejoice in a beautiful day with strangers. 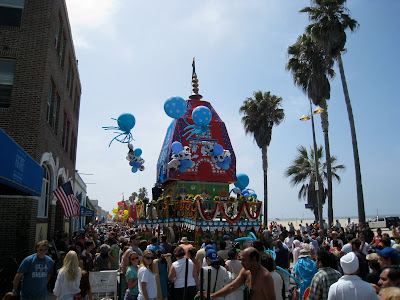 They do more than that, too. The Festival of the Chariots Sunday is always a big carnival-type event too, off Windward Circle. 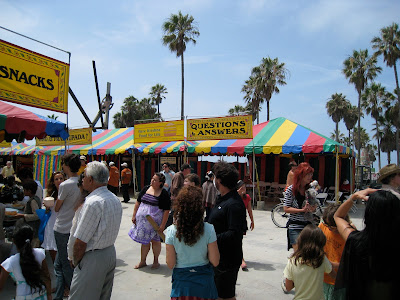 You can hear music, watch great dancers, learn about Reincarnation, Ask Questions and Get Answers (finally, Los Angeles!), but the best part, especially to the many who really do need it, judging from the long, long line - is the Free Feast. 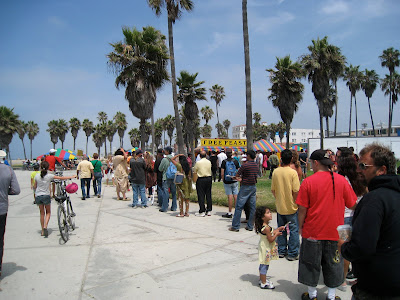 The spirit of giving, whether that be of food, flowers (I later found a rose that I'd caught from a person on a chariot, forgotten, and still tucked neatly in my cleavage), or simply fun, is what I always take away from this special day in Venice. 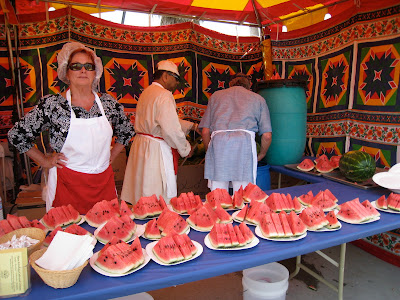 I almost wish I could rewind to the time when I was the person that had no idea what was approaching. That kind of pure and lovely surprise is pretty rare, but it's kind of like the place we live ... you get enjoyment every time you share it with someone new, and feel lucky that you kind of get what's going on. 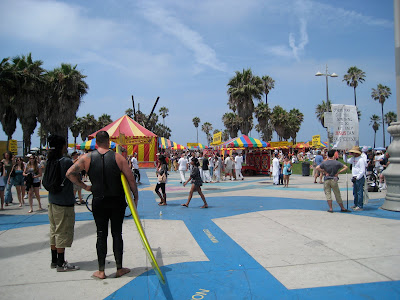 So a surfer talks to a Bible beater talks to a robed Hare Krishna person talks to a Cop talks to a street performer talks to an English tourist talks to a homeless guy talks to a fruit seller talks to me (and so on ...) on a fine Sunday in August in Venice, California. Which is exactly the way it should be, the way we try to live here, and just how I like it. I had to leave before everyone else to do a little work thing, and said, "The real world is a drag sometimes". To everyone milling around The Boardwalk last Sunday, the "Real World" meant anywhere but here.
Posted by CJ Gronner at 3:55 PM