April 20th is the day each year that Venice friends and loved ones gather to play croquet and celebrate each other. Sponto was always an attendee, and now that he's gone, we've changed it into a Memorial to remember him and all the good times we had together.

This year, the day broke gray and ominous. We remained positive right up until start time (1:00) when we had to admit that the rain was actually falling. Horizontally. We put the word out to meet up at Hal's to ride out the rain delay. In costume (as this year's theme was "Alice In Wonderland"). 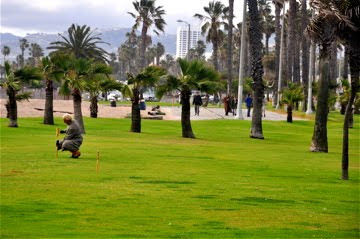 Two Alices, Two Mad Hatters, A Rabbit, A Flamingo, Tweedle Dee & Dum, some in Sponto Orange or Rasta colors, and a host of others (perhaps too daunted by the rain to fully garb up), started the party with some drinks, eats, and Growing or Shrinking pills (orange jelly beans) by the bar at Hal's ... until the rain slowed to a mist, and then stopped altogether. Like we knew it would. 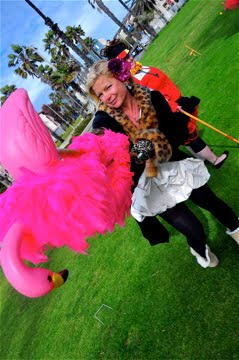 That was our cue to hop on our bikes and head down to our chosen plot of lawn down at the Bike Path to get in a quick round of Croquet before the weather threatened us again. We set up the wickets, laid down the plastic tarps and blankets for the sitters to sit on (with brightly colored cupcakes and tea sandwiches for our Tea Party!), and chose colored mallets, just as the Sun broke through. 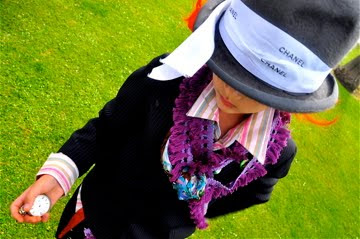 Cold and windy as it was, the high spirits kept us more than warm enough (the flasks of champagne didn't hurt either), and the Spontaneous presence was felt as much as the sunbeams. He would love that the gang gets together in his honor on this day ... dressing crazy, blowing off everything else on a Tuesday, and going absolutely nuts in his name. I know he would also love that a lone saxophone player leaned against a palm tree a big chunk of the time, never even interacting, just serving as the emotive soundtrack for our annual tribute. 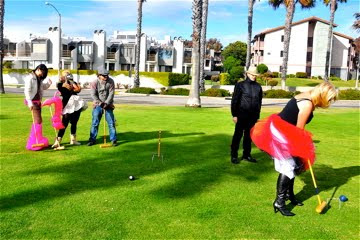 To know Sponto was to love him. And each other. It's a great thing to set aside a day just to revel in that. So we do each year, but it really is something that ties together our Venice family all year long. The One Love vibe ... It's catchy. 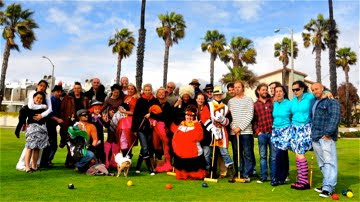