The People's Republic of Venice Welcomes Back The Nightwatchman!

It's been a while since The Nightwatchman (Tom Morello) last liberated Venice. In fact, Venice was the site of some of his earliest liberating. We used to have Friday nights at Abbot's Habit that my brother, Paul, booked, called The Habit Night. Tom and I were friends, so when he was working out his new solo acoustic project, The Nightwatchman, back in 2005, he offered to play at The Habit for Paul and I's birthday jam. It was a packed house of riled up Venetians at the height of the sickening, unpopular Iraq War. It was sweaty and heartfelt and kickass. Really, there's some great footage. There was another Habit jam starring The Nightwatchman in early 2006, and then that ball really got rolling, the venues got bigger ... and so did the country's problems.

Last night saw The Nightwatchman return to Venice, for a show benefiting Afghanistan Veterans Against The War (and IVAW) at The Stronghold. The Same. Long. Awful. War. Gone were the backing instruments of coffee grinders and latte foamers, but back were the sweat, heart and ass kicking. Harder than ever. 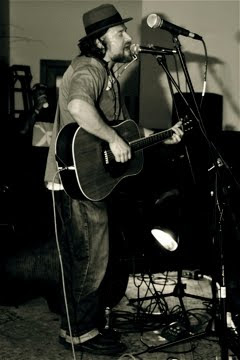 Tom Freund opened up the night with some of his choice musical selections: "Copper Moon", "Truly Mellow", and, appropriately for the night, his Beatles cover of "Revolution", with his bass standing up alongside him. So was the crowd, singing along heartily at the very start of the night. He's playing tonight at The Stronghold too (Go Tom!) so get on over there. His talent runs deep, and it's always a complete treat to behold. Longtime comrades of The Nightwatchman, Jason Heath & The Greedy Souls, were up next to help set the tone of the night with their excellent tunes of pondering anarchy. "Anarchist Girl" has always been my favorite of theirs, (and perhaps a theme song of mine at times), and it reminds me every time I hear it of when Jason Heath told me that if things got crazy with tear gas or whatnot when we were both raging against the Republican Convention in Minnesota (2008), that I should soak a bandana in vinegar to combat the fumes. Good information! (We didn't have to use it, but still). They played "Truth Rag", "Flower In The Sun" (another lovely fave), and the rueful "God's Name In Vain" from their great album, The Vain Hope Of Horse. Jason Federici played the accordion movingly, and Ysanne Spevack joined in beautifully on the fiddle. As I told them, their music makes me want to travel. Escape. Reflect. Appreciate. Rock. 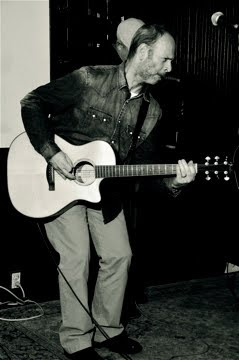 Wayne Kramer (yes, of the MCmofo5!) joined JHATGS for "Anarchist Girl", and then stayed up there for his own set. He is a great friend and co-Freedom Fighter of The Nightwatchman's, and he and I met on the 2008 Justice Tour. (He was the one that first told me I needed to get to the ER when I got bit by a crazy post-Katrina spider in New Orleans. I will always remember how I should've listened to Wayne Kramer right off the bat). It was great to see him again, and especially to hear one of my faves of his anew, "Something's Broken In The Promised Land". Featuring such biting lines as "The whole state of Michigan just signed up for welfare", and "The dream is sold out in the Promised Land", Wayne lets you know this is not music for Easy Listening. You'd better think, and you'd better bristle at injustice if you're going to get Wayne Kramer ... and everyone got it last night in Venice, California.

Wayne launched a new organization, along with Billy Bragg, at SXSW called Jail Guitar Doors that is working to rehabilitate prison inmates through music. Wayne did time himself in 1978 and The Clash wrote a song ("Jail Guitar Doors") about it, hence the name Billy Bragg chose when he started the initiative to honor Joe Strummer's life. Wayne told last night's assembled about it all and said "Send us money. Guitars ain't free y'know. Something happens when they pick up that guitar, and they're not gifts. They're a challenge - to use as a way to cope, and to not go back to the Pen." I think we can all get behind that. So please do. "Bad Seed" was next, in honor of those "bad seeds" they're working with. "Hollywood Boulevard" spoke the great line, "tough thumbs in your belt" that I loved. Wayne is a real poet, and makes you feel wiser after just one listen. He dedicated the next one to his lovely wife, Margaret, "who didn't show up tonight." "Let It Be Me" was an incredibly dear love song that made you feel the true depth between them. He wrapped it up with a jangly acoustic guitar version of "Redemption Song", which everyone sang along, and seemed to truly feel.

Wayne introduced his dear friend, Mr. Morello, who sprang onto the stage saying, "I'm The Nightwatchman, and it begins tonight!" And so began the song called, "It Begins Tonight", with Tom on his trusty "Whatever It Takes" acoustic guitar, and banging along with himself on his stomp box. Shouting that let you know everyone was on board followed that, which led right into "Flesh Shapes The Day". Tom really knows how to throw down as a showman, and the crowd was all the way into it all the entire time, yelling especially for the "Si Se Puede!" line. 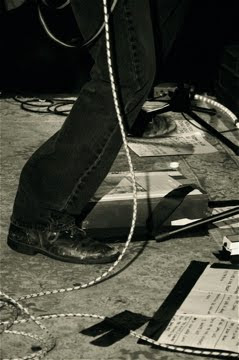 "Maximum Firepower" has always been a rile-er of the masses, and it was no different last night. "The Nightwatchman giveth and taketh away" was as true as a lyric as it was for the volume. One minute the entire place would erupt in deafening applause, the next it was what it must sound like when you're deaf. Silence. "If you take one step towards Freedom, it'll take two steps towards you." Inspirational as ever, Tom sings the truths we all need to hear. And act on. "The Dogs Of Tijuana" was dedicated to Wayne Kramer, with its Mexican guitar melodies and "Ah-Ah-Ah-Ah" chorus, and warning that "Every dog has its day, and tonight we're coming home!" (That made me smile that I was at a sweet rock show a mere two blocks from home!) 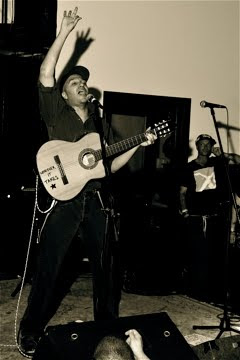 "Thank you! It's always nice to play The Peoples' Republic Of Venice! Full of Hippies and Liberal Activists ... and you have the Beach!" Yes. Yes we do, Tom. And you're clearly welcome back anytime. He dedicated the next one to the Soldiers of IVAW (whom we really got to know on that epic Justice Tour, visiting the horror show of the Walter Reed Hospital - you really should re-read that article here - it was enough to make ANYONE a Hippie Liberal Activist), the beneficiaries of the evening. "When The Tigers Broke Free" was Tom's adaptation of the Pink Floyd song, and made you feel the pain of a child looking back on the death of his Father. More than poignant when you think of the many, many pointless deaths that have happened during this awful war. It's time to end it. We've lost too, too much already. There is no winning for any side of it anymore. Just ending it, and mourning the incredible damage it's done to us all.

Which leads us to the acoustic version of Rage's "Guerilla Radio" - always a crowd favorite, one that Tom hopes will be played when the day finally comes "When War Criminals of ALL administrations are brought to trial and convicted." Huge applause for that, extra so since the night was in honor of those AVAW/IVAW members. "There is nothing more courageous than a Soldier willing to stand up against an unjust War". "ALL HELL CAN'T STOP US NOW!!" was yelled by everyone, not just the super fan guys that sat down front and sang along to absolutely every syllable. Cute. 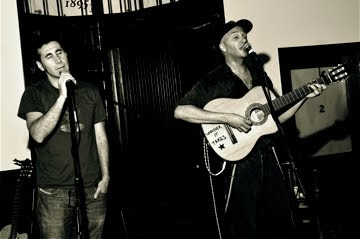 A special guest called Serj Tankian (System Of A Down) joined Tom for their sublime duet, "Lazarus On Down". It features gorgeous deluxe guitar from Tom, and otherworldly vocals by Serj, who was in the best voice I've ever heard him. Hauntingly quiet in there, these two founders of Axis Of Justice brought the house down. Almost literally, so eruptive it was after the last note died out. 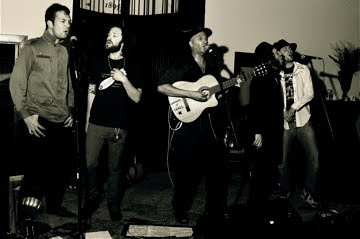 Tom is also producing a band out of Brooklyn called Outernational. Great guys, and they're cut from the same cloth, to be sure. They joined Tom for their call to arms called "Fighting Song". Accordian and trumpet added to the mix, and gave it a Gogol Bordello-y feel, encouraging folks to quickly learn the chorus and sing along for the fight. "All of the People, all across the World, they want something more!" Absolutely they do. And a good start to the more was the "World Premiere" of The Nightwatchman's brand new tune, "Stray Bullet", which Tom sang for Tomas Young, another friend from the IVAW whom we met after he was paralyzed by said stray bullet pretty much immediately after arriving in Iraq. You simply cannot hear his story and be supportive of ANY War, any longer (if you ever were). See Body Of War and you'll understand what I'm saying. Some plaintive Outernational trumpet drove it all home. 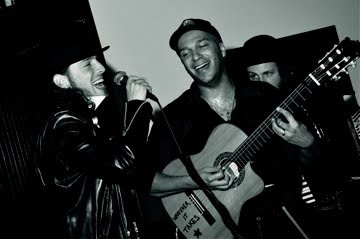 There was a moment for tuning during which Tom encouraged people to scream their lungs out, which they did. He then said, "This is a future Classic ... so Stand Up! If you believe in fighting against Injustice ... against Immoral Wars ... then get on stage and sing along with The Nightwatchman! Get up here!" 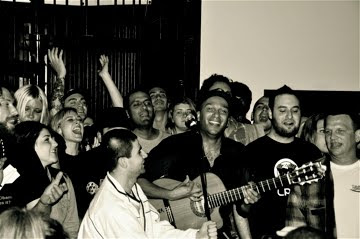 So as many people as the little Stronghold stage would hold crammed up there to belt it out along with Tom to "Worldwide Rebel Song"! It was easy to learn the "Worldwide Rebel Song, sing it loud, all night long!" verse and sing we all did. It was a little "We Are The World", only way, way cooler than that lame one they just re-did. I cracked up at one point when Tom stopped the proceedings to get someone to fix the microphone stand for him ... "I cannot have a microphone stand that's leaning to the right!" No more cool hipsters were present at The Stronghold by now, as every single person in there seemed to have now joined the Superfan ranks, with huge smiles and rambunctious singing overtaking any thought of posturing ... "Here we come!" 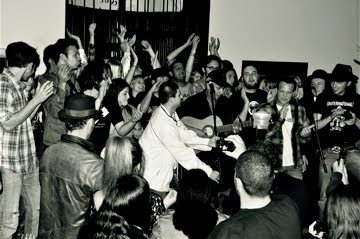 As with every Nightwatchman show, there is more to it than simply rocking it out together. It tends to stay with you long after the stamp on your wrist fades away. Because you can see how music really does affect true change in the world, not just in the uplift of your mood, but in the tone of your thoughts. Enough people singing the song out loud as one - rebelliously - and then walking the walk (or the Picket Line ... or the Peace March ... ) IS the force of change necessary for anything positive to ever actually HAPPEN. As The Nightwatchman closed the evening down with his customary, "Take it easy, but take it!", I hope that Venice - and everywhere else lucky enough to host a throw down like this - will indeed take it ... to heart.


*You can see more pictures that rule at www.PaulGronner.com
Posted by CJ Gronner at 3:02 PM