Though it's thoroughly great to be in Venice, sometimes you have to branch out and take Field Trips. Luckily, I run with a gang that enjoys excursions to the new and unknown right along with me. So the other day, we decided "Cultural Day", and off we went.

I'm embarrassed to say that in all my years living in Los Angeles, I'd never visited the Watts Towers, though I always wanted to. Vavine was down with me, so we made solid plans to achieve this goal, and Saturday was the day. We grabbed Matt, his Mom, Ann (visiting from Australia), Joey and Paul, and headed to Watts. 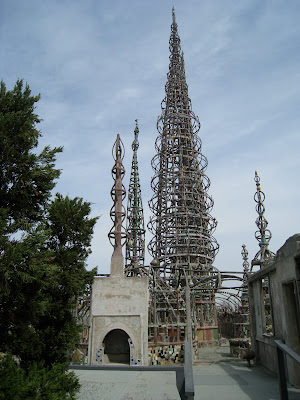 The tall spires of Simon Rodia's Watts Towers rise high above the surrounding neighborhood, and you wonder what the inhabitants of the small bungalows nearby must have been thinking of this little Italian man working away for 33 years on his vision. It's impressive simply to behold, but once you know the story behind it, it becomes even more so.

We went inside the little community center (Charles Mingus Youth Arts Center) across the park from the Towers to pay our $7 entry fee and look at the attached art gallery, featuring Wisdom Knots & Other Symbols by Varnette P. Honeywood. I loved every pretty much every piece, and our Art Day was off to a great start. We met our tour guide, the very knowledgeable Marqueeda, gotten up in a bright neon outfit, and she led us to the Towers themselves. 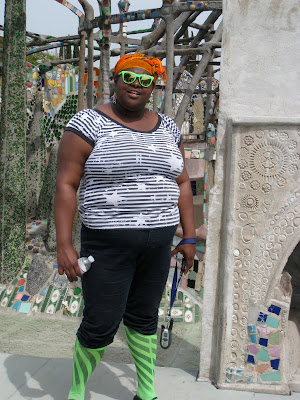 Mr. Rodia bought the property in 1921, and soon began building his giant project. He was a Tile Setter by trade, working at the Malibu Tile Company. Whenever there were scraps from a job, he would take them home and save them. The same went for broken pottery, dishes, glass, bottles, shells, whatever struck his fancy. As Marqueeda said, "He was an early pioneer of recycling." He would get up at 4 a.m., go to work all day, come home to bathe and eat, and then work on his dream all night until 2 a.m., and then start it all over again. For 33 years! He often blasted Italian Opera while he worked, so not only did his neighbors think he was crazy for toiling away on this huge endeavor, but also found him a bit annoying when they were trying to sleep. 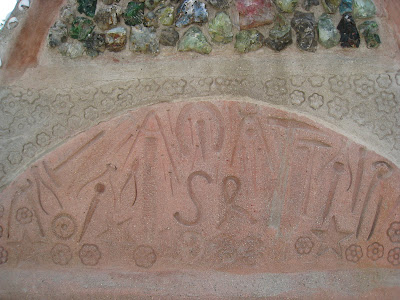 Mr. Rodia used no machinery, no scaffolding, no ladders, bolts, welding, or even plans. He used nothing but regular tool box tools (which he ended up signing the piece with imprints of, and merely his intials), and would build up with cement until it dried, then stand on that to get to the next level. He did it all entirely himself, and couldn't have had help if he wanted it, as he both had no money to pay anyone else, and didn't have instructions to give them if he did ... since he was illiterate, and also just made it up as he went along. He would pay neighborhood kids 5 cents to gather up broken stuff they could find for him to use, which led to some rascally ones breaking their own home's dishes to get paid. You can see tea-cup handles sticking out, old soda bottles, etc etc ... and it really is a living history. 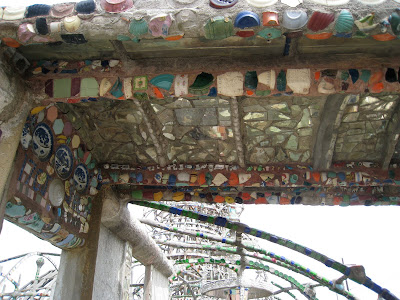 The tallest tower stands 99 feet (because if it was 100 feet, he would've needed a permit) and was intended as a Wedding Chapel (Mr. Rodia later became a Minister - people would get legally married somewhere legitimate, and then go get married "By old crazy Sam"). There were two entrances for a bride and groom to enter through separately, then an exit for them to leave together as one. How sweet is that? There was also an adult baptismal font built in, as well as some bird bath sized ones for infants.

Towards the end of the property is a big ship, as Mr. Rodia was a big admirer of Marco Polo and his explorations. Marqueeda said that he made the replica of Polo's ship, and then made his own. "Can anyone tell me where Sam's is?" "We're standing in it", was our reply, as you realized that the entire property was Sam's ship - the Towers serving as the mast and sails. 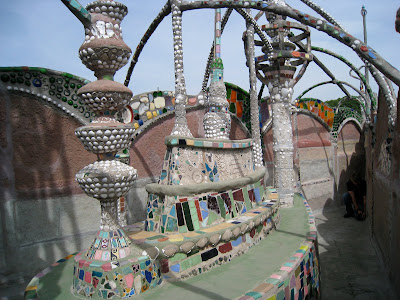 In 1955, Mr. Rodia left the property to a neighbor, with no instructions, and no one seems to know why. The house part burned down a year later (from a firecracker to the roof), and the neighbor had no idea what to do with it all, so sold it to a Mr. Montoya, who planned to open a restaurant called the "Taco Towers". The City soon found out about it and made plans to condemn and demolish the towers, but luckily, as it takes the City forever to do ANYTHING, that didn't happen. Montoya soon sold the property to a group that recognized the cultural importance and ART of the Towers, and were committed to saving it. The City demanded a "Stress Test" to find out if the structure was sound, and the decidedly low-tech test of a truck pulling on it with a rope was enough to pass, as the cables snapped and the truck wheels came off the ground. Marqueeda told us, "Earthquakes are not an issue, but the weather is", which is why monies are being raised all the time to preserve and restore the structure. 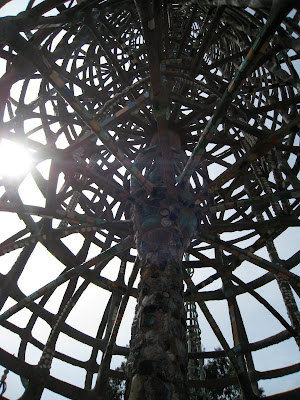 After touring the whole space, we watched a short old documentary about it, and in it, Mr Rodia said, "I had it in mind to do something big ... and I did." He certainly did. It was kind of emotional to see, because it shows the strength and commitment of a simple guy with a cool dream. As the old-timey narrator says in the film, "He wanted nothing for himself. He was content to think of great men, and build in the direction of the Sun." What an inspiration! And I now think that Simon Rodia was himself one of those great men he thought of and aspired to be. 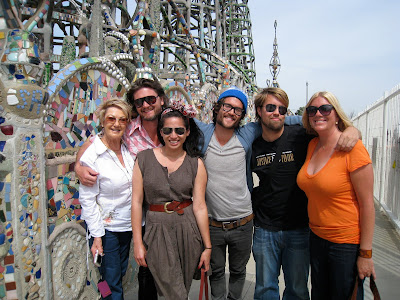 After that complete pleasure, we set off for MOCA to see the new . Driving down Central Avenue to the freeway. We were all a little peckish at this point, and passed by an absolutely condemned looking place called Louisiana Chicken (and Chinese Food). We thought it was just the shell of a building ... until we smelled it, and then saw a line of cars at the drive-through on the side. U-Turn. We waited in line behind a surprisingly sense-making crackhead, and then ordered up our own fried chicken. We made friends with some locals while waiting, and they asked where we were from, taking one look at us and knowing it wasn't from there. First of all, it was the best fried chicken I've had in this city, and second, when we branch out a little from our small worlds, life opens up, friends are made, and that's how world peace starts, I think. A true highlight of a day of highlights. 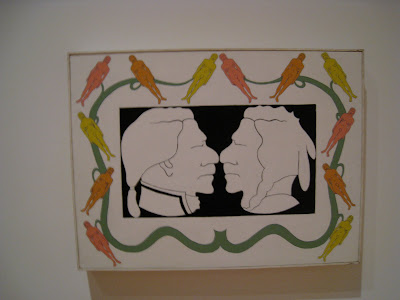 We cruised through the very good and thorough "First 30 Years" exhibit at MOCA, and then went to Harold and Belle's for some delish New Orleans style soul food. It was a long day and we were now stuffed and spent. Movie time. At home. We wanted something that no one had seen - not easy. Flicking through the On Demand section, we chanced upon one called Gentlemen Broncos from the writer and director of Napolean Dynamite. Throw that thing on your Netflix right now, because it is hilarious and sweet-natured (featuring Sam Rockwell, Jennifer Coolidge, and Jemaine from Flight Of The Conchords), and I can't believe I never heard about it in theaters.

So there you go ... the next overcast day you feel stumped as to what to do, just go copy the above day, and you'll feel pretty darned fulfilled.