People have really needed to blow off some steam lately, if the size of our annual Venice Mardi Gras parade was any indicator. The crowd was bigger and better this year, and the level of costume participation was unprecedented in my experience. The beautiful day might have had something to do with it too, as after weeks of super cold and wind and rain, we got a bright, warm, sunny day in which to revel in - and boy, did we revel! 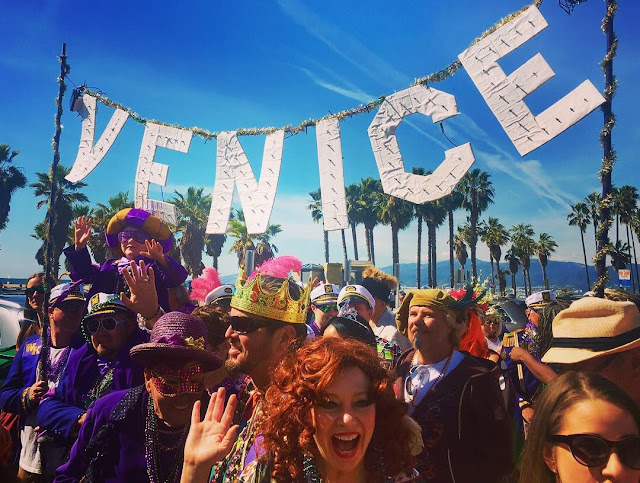 The posted parade starting time was noon, but I knew this meant Venice Standard Time, and sure enough, the Mardi Gras Krewes assembling at the Rose Avenue beach parking lot were still there mingling at 1:30 PST. That was a good thing though, as more people showed up, and more people were more buzzed up after their time inside the Venice Ale House - which makes for a good parade. Mardi Gras Queen, Deanna Navakuku, and King Paul Rivas were all robed up and ready to reign over a day of Venice magic. 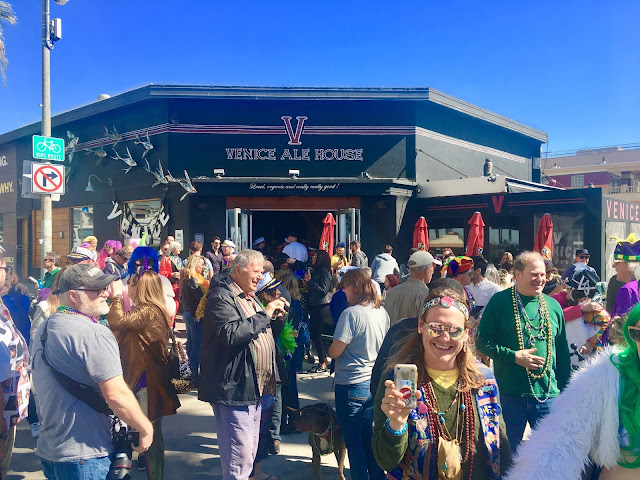 The costumes were very colorful and impressive, as most did their best to be on theme with the "Magical Mystical Tour" vibe chosen for this year. The actual cover of the similarly named Beatles album is pretty creepy, with like pig furries in scarves, but surrounding them is a swath of psychedelic Day Glo swirls ... so I went with the rainbow tie-dye (also honoring Venice's hippie past) and matching Mardi Gras mask. I feel I'll get more use from the dress for sure, in these parts - AND it's the 50th Anniversary of Woodstock this summer, so I'm all set. 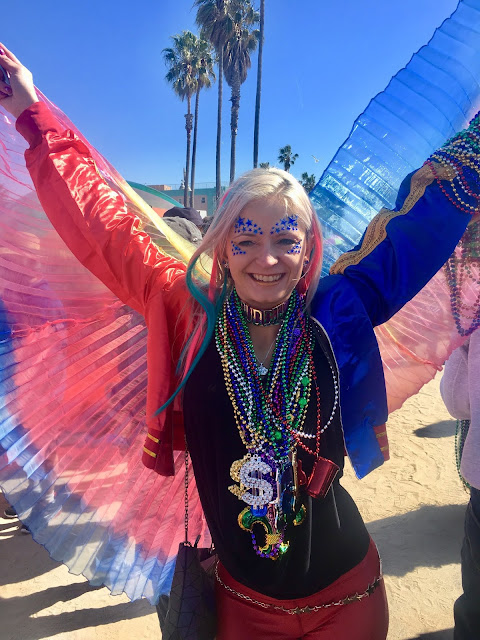 There was a silvery jellyfish, a parrot, a majorette ballerina, a wizard, a butterfly (Miss Jessica Sugar Long - co-founder of this extravaganza with her husband Johann since 2001!), among a ton of other great outfits. As ever, the Venice sign was held by the purple jacketed members of the Windward Krewe. The Gumbo Brothers brass band (led by co-founder Johann Stein)and the hula hoopers finally struck up the tunes and begain to twirl, and we all set off down Ocean Front Walk, to the delight of the many tourists that had no idea that this was all happening. Just another colorful, fun day in Venice! If they only knew how precious and necessary these events are to keeping our Venice colorful, and yes, weird. 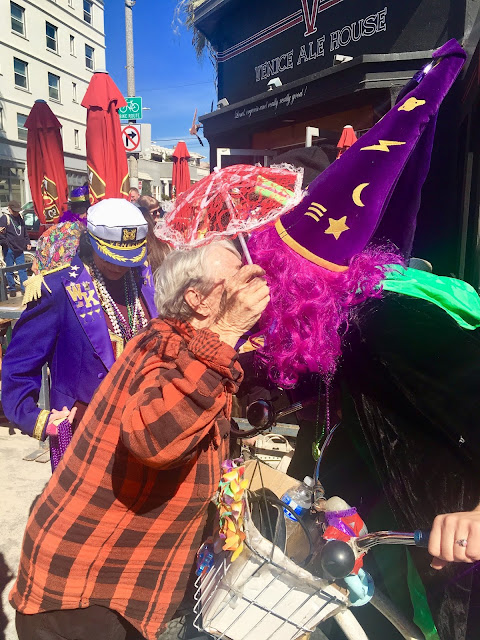 Everyone danced along, tossing out the colorful beads synonymous with Mardi Gras everywhere. (And by the way, this is a grass-roots party with Miss Jessica and Mr. Stein providing the beads and fun off-set only by donations!) Cameras were snapping all along the parade route as people couldn't believe their awesome luck to be in Venice on such a fun day. 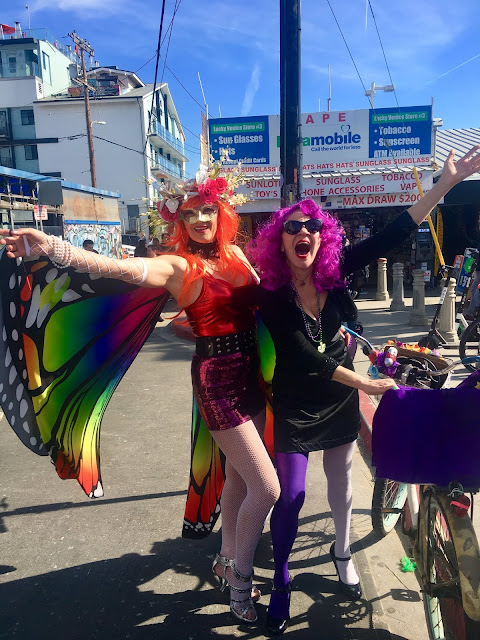 People were hanging over their balconies - just like in New Orleans - and blasting off confetti guns to rain down on the parade passing by below. This got a grateful roar each time it happened, and amped up the good vibes even more. Visitors standing along the sides of the parade would join in so that by the time we all got to Windward Plaza, the crowd had grown to be pretty dang big. 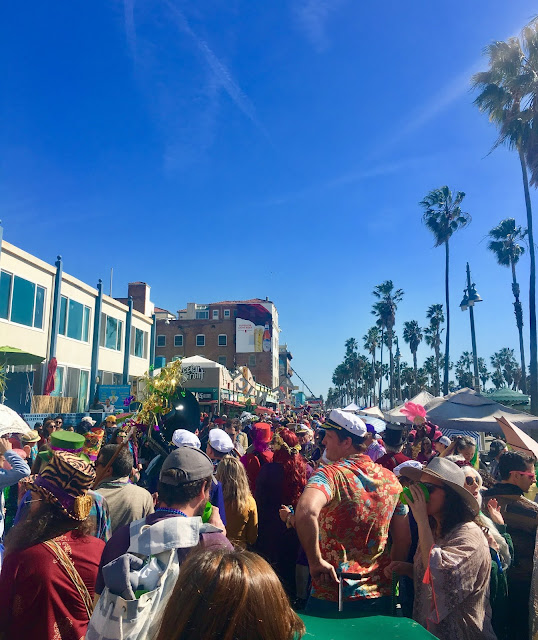 We all danced around to "When The Saints Go Marching In" and "St. James Infirmary", posed for about a zillion more photos. Then it was time to head on into Surfside, where The Gumbo Brothers would keep the party going for all of the parade partiers long into the evening. 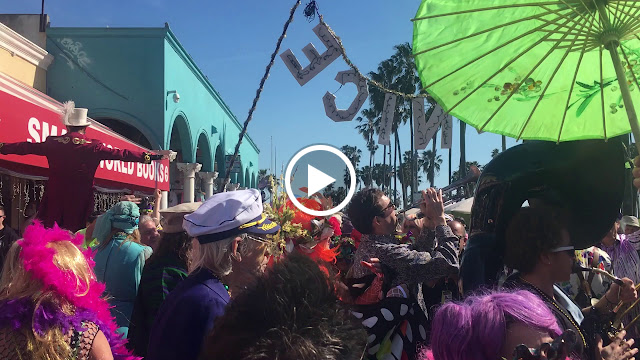 Tree Man was there, all dressed up in formal wear for the occasion! That was something special to see, and he had a tall friend this year, with a fellow on stilts done up to look like an Abbot Kinney sort. Good times indeed! 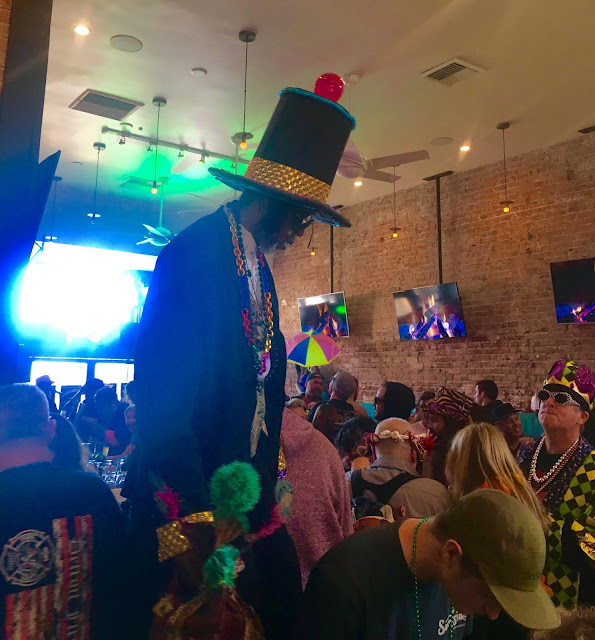 There was a special Mardi Gras menu at Surfside, featuring Po' Boys and Hurricanes, and the venue was once again a gracious host to all of the Venetians hell bent on having the best day ever - and I think that was pretty well accomplished. 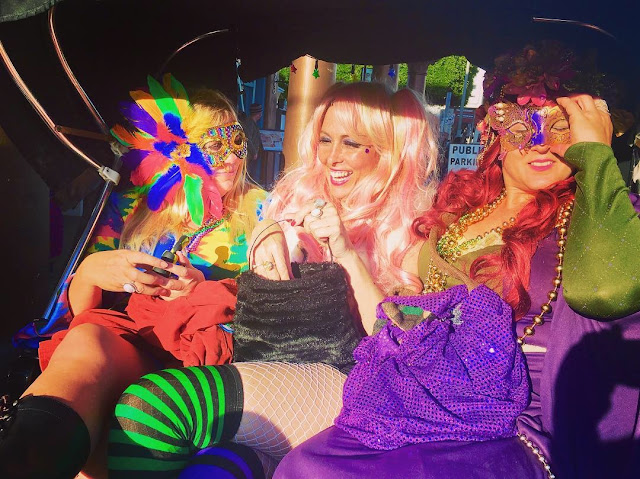 Venice Paparazzi was there with a fun photo booth, and all the good moments were captured and then some. Had you just landed in Venice for the first time on this day, and seen all of this joy, fun, and love for a community, you would think this was the ultimate place to be, and that it lived up to all you'd ever heard about this magical, mystical place by the sea, as far west as one can go. 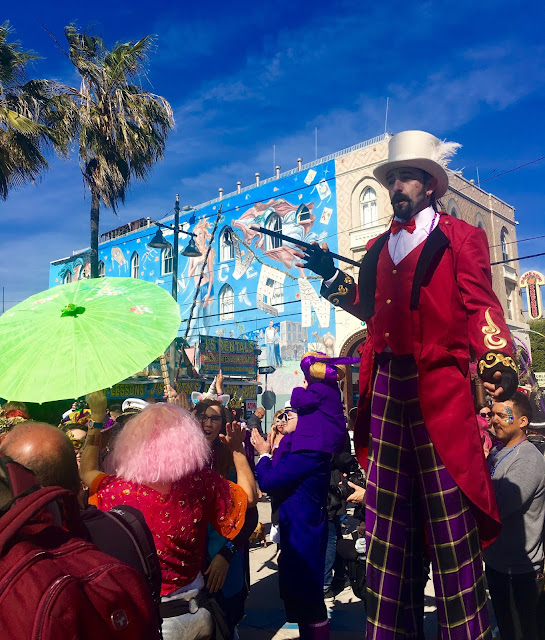 And that's just how we like it. These are just the kind of days that reaffirm we're all in the right place, all we types that don't want to be in a place that's just like everywhere else. 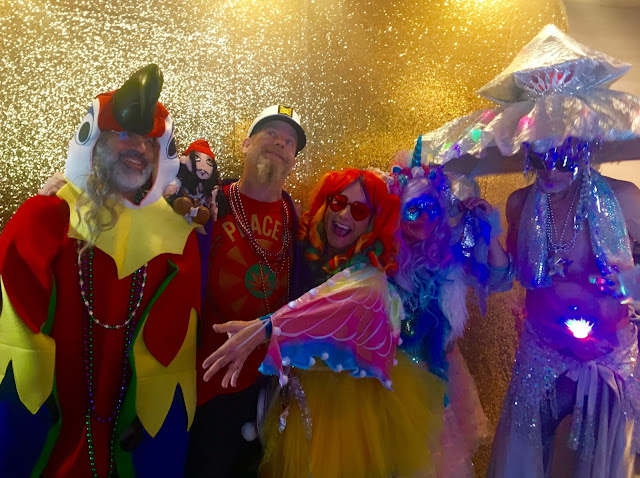 That's why we parade. That's why we dress up. That's why we make art and music and love here in Venice. So that we know that there is still someplace special in the world, where we are all free to be you and me. And THAT is how you let the good times roll! 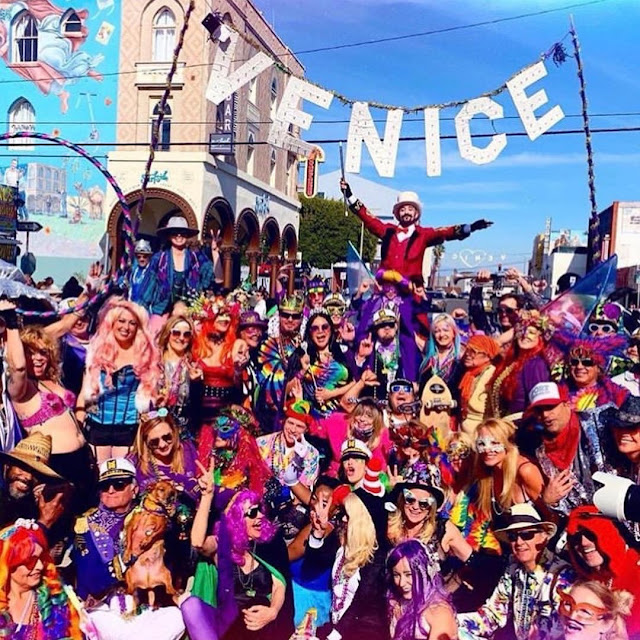 One more awesome Mardi Gras in Venice, Everyone! Thanks and LOVE to everyone there who knows exactly what I'm talking about. You're all just the best.