A Valentine To Venice - The Suzy Williams And Michael Jost Bravo Release Party!

The second story of the day is about the second part of last night, which was a celebration at Beyond Baroque for the release of BRAVO - the new album from Venice (no, Global!) treasures, Suzy Williams and Michael Jost! 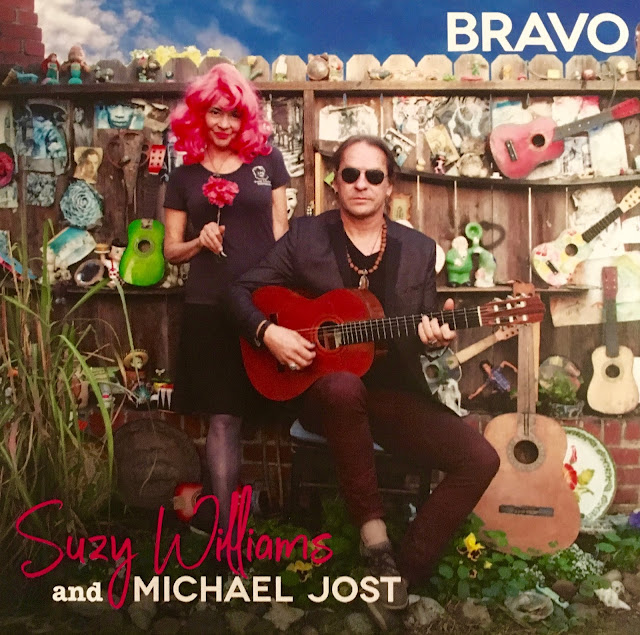 There was a packed house full of old school Venetians, and love was definitely in the air on this chilly Valentine's Day. The lobby was full of Williams and Jost fans enjoying wine, chocolates, hugs, and kisses in the true spirit of the holiday that celebrates love of all kinds. Old friends caught up and new ones were made ... and then it was time for the musical extravaganza! 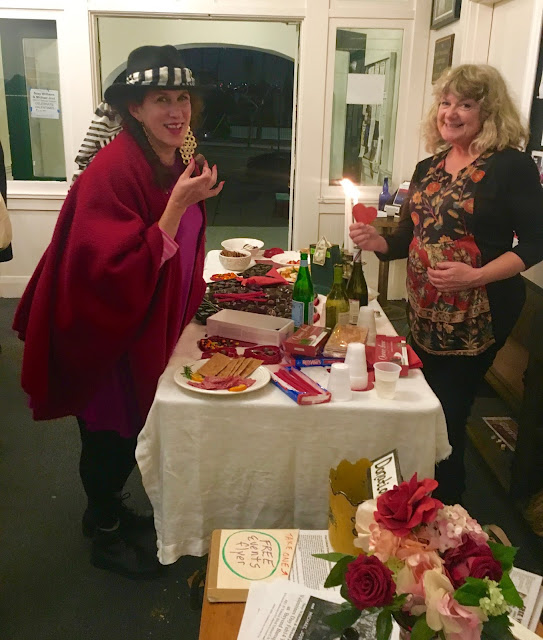 The show was the debut of the tracks from the new album, which they played in its entirety, and in the order of the album. The first one was the title track, "Bravo", and it's hard to believe it's not an old standard, as it already sounds so classic and great. Williams was backed by her full band (of all local musicians!) from the album and Jost wove his guitar magic throughout all of the songs so seamlessly that you knew this album was simply meant to be.

Decked out in a pink wig and red roses from head to toe (with some black lace for good Valentine measures), Williams was a lovely vision even without singing, but then she did her thing and the entire room fell in love with her (if they weren't already). She has a way of delivering a tune that entirely immerses you in the story of the song, and looking around the full house you saw faces that were truly beaming with delight. I heard a guy near me say to his neighbor, "I love her!" - and he had a room full of stiff competition (though her adoring husband, Gerry Fialka, was front and center). 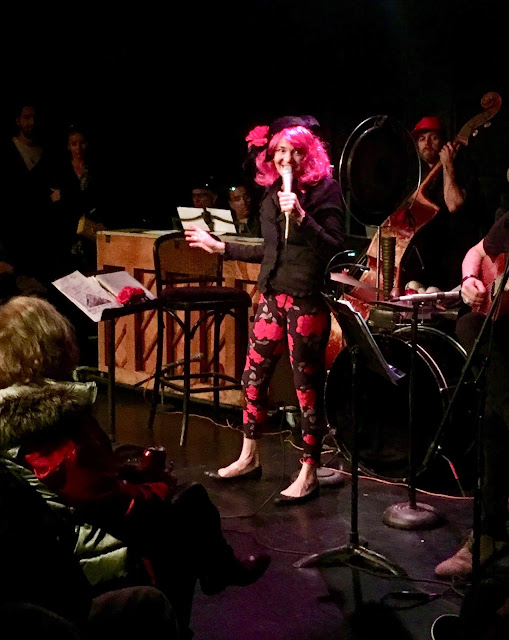 Every song told a different story that Williams, Jost, and company brought fully to life. "My Lover Has Many Faces" was a favorite, and the lyrics showed off that trademark Williams humor. At one point, she yelled at Brad Kay to "Shut the door! I mean J'adore! Happy Valentine's Day! If you're in love, spread your love. If not, do it anyway!" - and that was the general vibe of the entire evening. It was exciting to see that Williams and Jost now even have merch! Fans went home with cd's and t-shirts, and there were even special BRAVO matchboxes! Awesome. 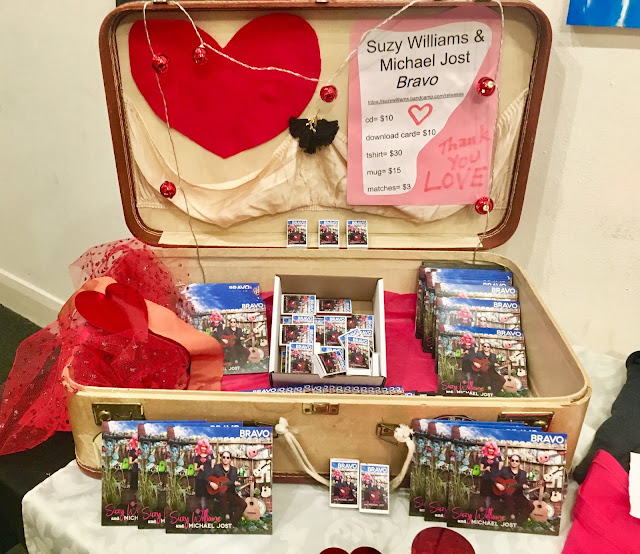 Williams is one of my dearest friends in Venice, and I found myself smiling ear to ear throughout the truly excellent performance. Jost's guitar work is truly virtuosic, and you feel yourself being mesmerized. The same goes for Benny Brydern on violin, who elevated "Beat My Wings" to even greater heights. Like, people were turning to look at each other with raised eyebrows as in "Wow!" All of the musicians are the most top notch in town, and it was a real pleasure just to be there listening to them. But then you get bonus bon mots from Suzy, like, "You don't need to kill a bull to wear a matador hat - and you can quote me on that!" - so I am.

Jost has a big flamenco influence, and thus, we got Suzy in Spanish on tracks like "Comprendo Compadre" and "Alguien Le Dice Al Tango"! We were all transported to Argentina for a tango, and then William said, "If you want to know anything, I'm truly wise. And I'm here. But sometimes you have to get the hell out of Dodge ..." and they lit into "Goin' To The Desert". It had a country rock vibe, and though a bit of a departure from Williams' generally more jazzy torchy vibes, it was one of my favorite songs of the night (and I think Greta Cobar's too, judging from her unique yells for Suzy!) 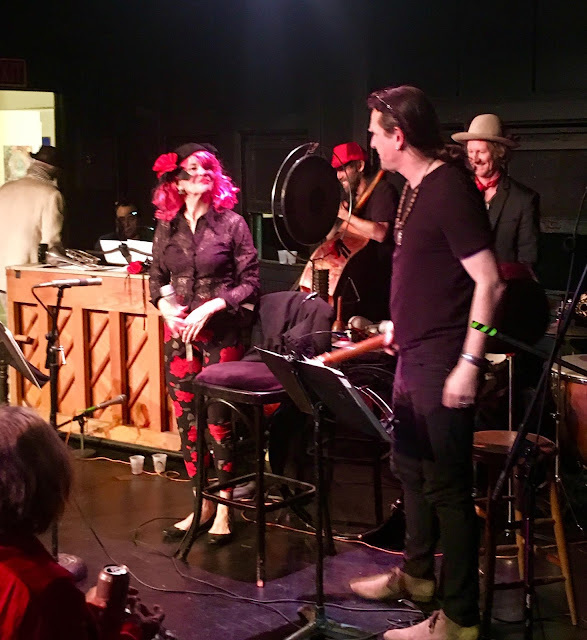 Songs like "The Suicide Tree" ("Our population is a disease ..."), "Beat My Wings" drew pictures in one's mind, and those Williams lyrics once again took us out of ourselves and into a place that we can all understand. This work is really something special. As are these world-class musicians, whom Williams next introduced. Almost all are longtime pals, and I was happy to see my friend, Austin Nicholson there on stand up bass being awesome. Stuart Johnson ("The third Beatle") on percussion, etc ..., Brad Kay on piano, Steve Weisberg on keys, Reinhold Schwarzwald on saxophone and flute ("Some people collect tchotckes like gnomes, I collect Old World Germans" - Suzy Williams), Benny Brydern on that gorgeous violin, and the outstanding, beautiful guitar stylings from Michael Jost rounded it all out to make a beautiful whole.

"Everyone Dies" was both true ("There's a lot of truisms on this album" - S.W.), and the last song of the night and the album. And by the way, this album and evening celebrating it are especially impressive, considering Williams herself almost died last October from pneumonia! The month before recording this gem! Wow. That gave even more weight to he sentiment put forth in song - as well as LIVED by these cool cats - was that yes, everyone dies ... but not everyone LIVES. Nights like these let you know that you really ARE living ... and living well. The empty wine bottles and chocolate boxes were also evidence that a good time was being had by all. 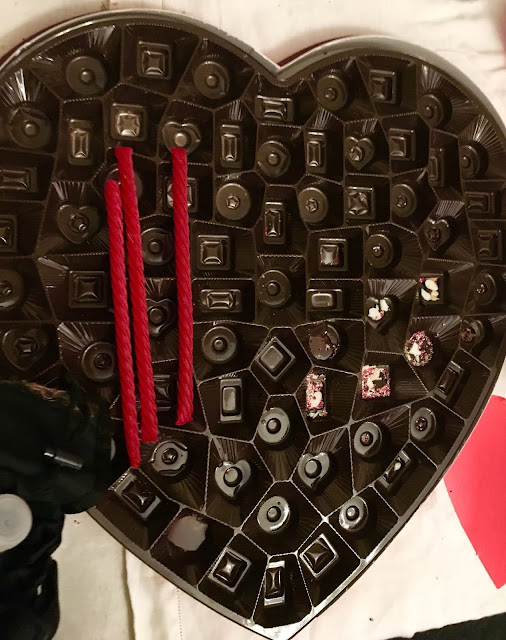 Please support our local treasures by purchasing the new album BRAVO from Suzy Williams and Michael Jost. Go see them play ANY chance you get - it really is something special. Attend programs at Beyond Baroque. Get to know your fellow Venetians. All of these things keep our community strong - and the Arts in Venice in the forefront, where they belong. 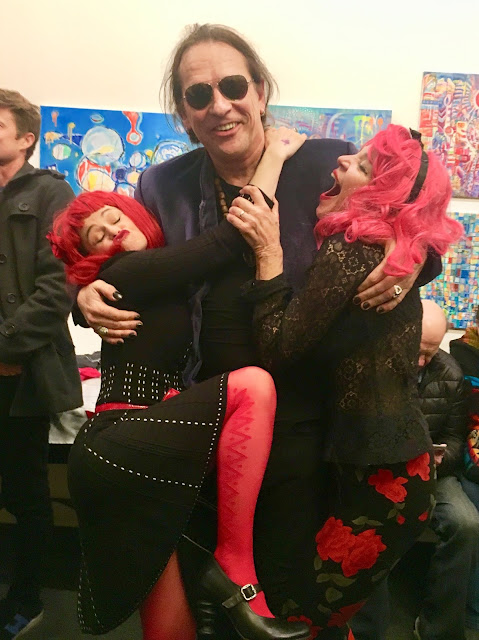 Thank you (!!!) to all involved for a Valentines celebration that filled everyone with love. Love for the things that matter ... love for art, love for music, and above all, love for friends.