Façade Of Time - A Public Performance In The Streets Of Venice


There were several community events going on around Venice this past weekend, with plenty of chances for everyone to get in on the fun. There was the Black History Month exhibit and conversation at the Venice Library. There was the "Venice Hootenanny" in Oakwood Park put on by the VNC that was really just a small stage, a big Jenga and Connect 4 game, and that's about it. No food, no drink, no bathrooms ... if it weren't for some of Venice's favorite musicians playing (Paul Chesne, Tom Freund, etal ... ) it would have been a complete bust. Better luck (or planning) next time, folks - but at least we had sunshine and friendship, and that's a lot. The coolest event of the weekend was the public performance of Façade Of Time, a kind of dance piece that traveled all through the streets of Venice to the Breakwater. 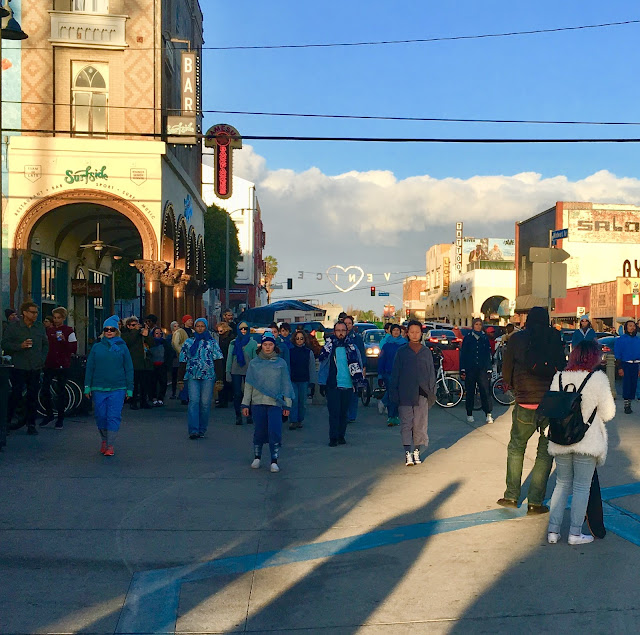 The Body Weather Laboratory was the organization behind Façade Of Time, and they started their performance at the bridge at the start of the Venice Canals. An otherworldly voice chanted from under the bridge - with its awesome acoustics - and then a little raft emerged with a woman singing. Performers were scattered throughout the crowd gathered, dressed all in blue, and chanting back to the woman. It had the feel of a co-ed monastery, with 60 blue monks of all ages, races, and genders together calling all of Venice to worship. 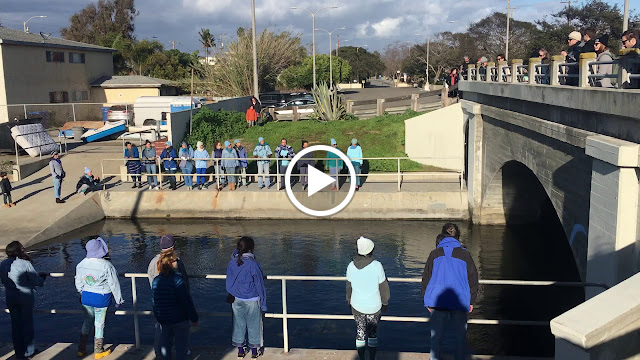 The monk vibe changed to a bit of a zombie vibe as the performers then all began to walk ultra-slowly across Venice Boulevard and down Strongs Drive to Venice Way. The crowd grew as we all followed behind and along the dancers/walkers, with a reverential silence the entire way. A passerby asked if the whole town was out taking a walk together, and yeah, we were. 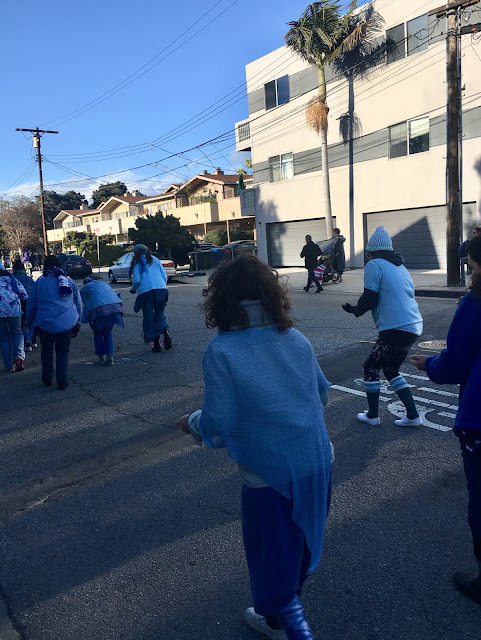 There was also a reverence for Venice itself as the performance moved along its streets. Performers would touch a plant, or a fence, or a wall, with such awe and respect that it was like aliens discovering a new place, or like the ancient Tongva people that used to live here having the ultimate respect for nature. It was moving to see ... and to be a part of, just by being there. A tourist girl going by said, "I don't get it. Is this a funeral of some kind?" And in a way, it kind of felt like it. A funeral for Venice ... for art ... for the past ... but as it progressed, and you saw how the experience was affecting people (Venice is still cool! Venice is still out there! Venice is still art!), by the time it was over, it became a true celebration. 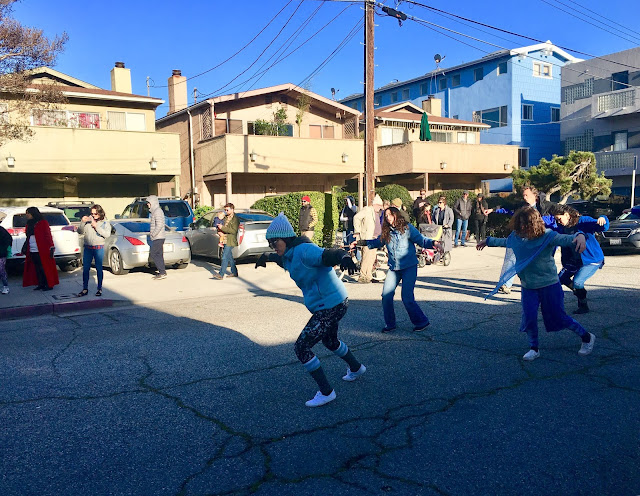 That is a goal of the Body Weather Lab, as its mission statement for the piece talked about how they aim to collapse barriers and enable everyone, without hierarchy, to have access to art. This was most evident as the piece moved through Windward Circle, and the streets became more populated. The homeless pushed their carts by as Teslas had to stop for the big group passing in the street (One driver dared to honk, only to be glared at silently by the entire group). The dancers split into four groups, one in each direction of the compass. The woman who had been singing under the bridge was now in the center of Windward Circle, directing her choir. 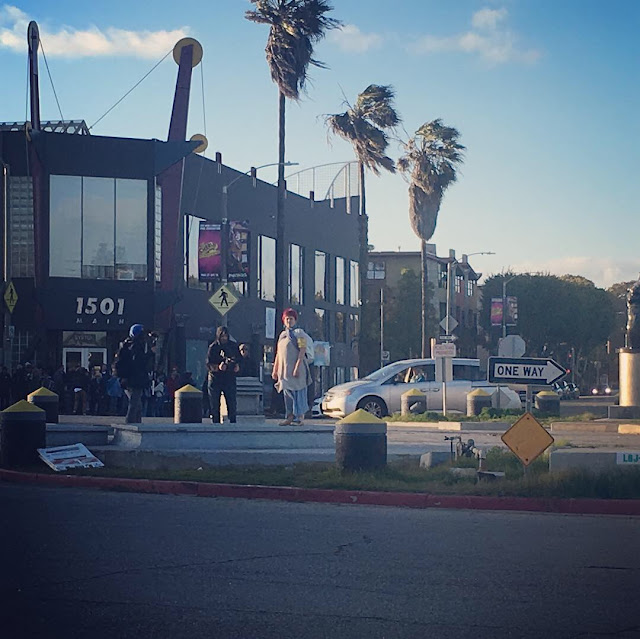 A mystical New Age-y music was in the air, and everyone was wondering where it was coming from (and why it isn't always being blasted out of Windward Circle?), only to realize that the cars making a tight rotation around the circle were actually all broadcasting the music out of their windows, providing a musical background atmosphere for the chanting performers on all sides. Trippy! 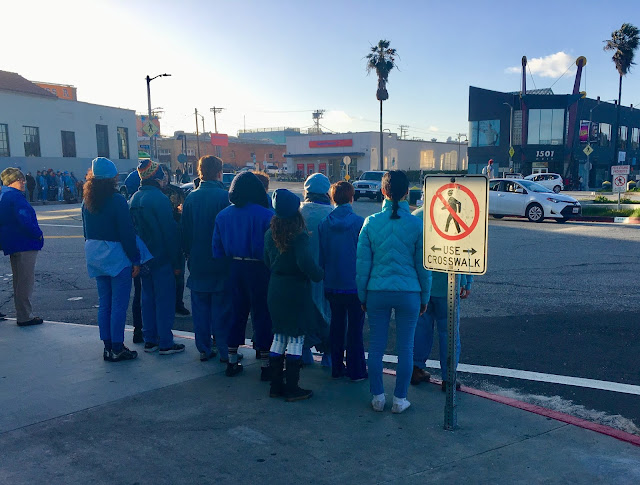 Right then, a man got off of a Big Blue Bus with his bike, and I wish I'd been able to capture his face. Total confusion, but with a smile, like "Where have I just landed?!" This is how I felt long ago when I first stepped on to Ocean Front Walk and knew that this would one day be my home. That this was a magical place, like no other. Imagine just getting off the bus and stepping into this scene ... it made me so happy that our Venice is still capable of blowing someone's mind. In a beautiful way, at that.

The now much larger group processed across Pacific and under the Venice sign, making its way to the Boardwalk. All of the tourists were stopping and staring, wondering ... and then they joined in. This might have been the windiest day I've ever experienced in Venice, and the gale force winds only added to the drama of the performance art happening right in front of everyone's faces. 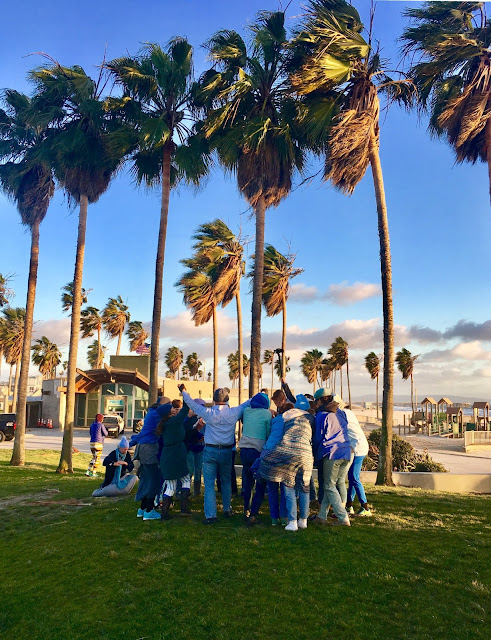 One group of performers laid down on the ground in Windward Plaza, and individuals took turns hopping up and shouting a Venice street name ... "Electric Avenue!" "Nowita Place!" "Venice Boulevard!" with acknowledgement of the years of art and history in this place. They were laying right where the canals are painted on the sidewalk, so it had an added element of a true sense of place. Everywhere the performance passed, you could almost see the Ghosts of Venice Past. Abbot's Habit was even one of the sponsors (among many, like the Electric Lodge and Venice Community Housing), so you got the sense that this was a piece given to the present from Venice's past - both as a gift - and a warning. 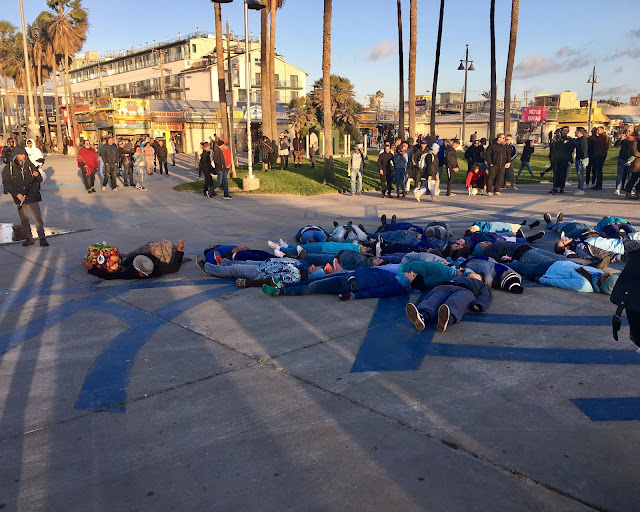 The other group made a circle around the big "V" statue overlooking the beach. They embraced, laughed, circled, and yelled as the wind whipped the whole chorus into a frenzy. Certain performers now brought out little chime and machines that zipped and whirred in the wind, creating a cacophony of sound as the performers came together to process across the sand to the water. 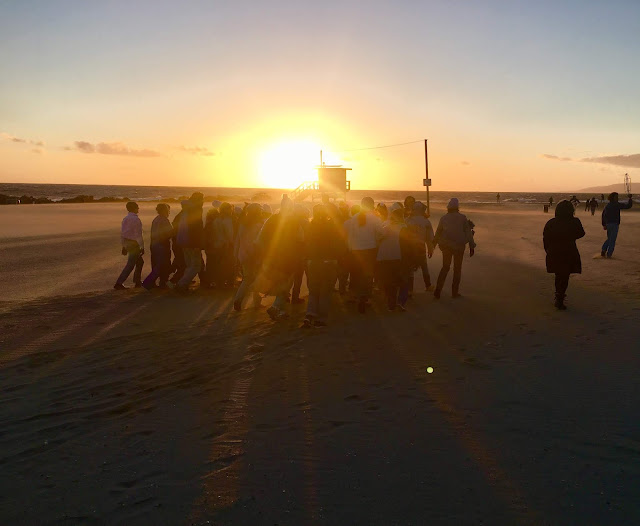 Everyone basically got some free micro-dermabrasion watching this piece as the sand was violently flinging sand into everyone's faces, but now we were invested and had to see this performance through to the end. All of the dancers stood together in a big line, and the choir director woman led them through a series of higher and lower chants and shrieks as the sun set into the far western horizon. It was a beautiful conclusion to a beautiful experience - and a beautiful Sunday - as the Supermoon grew high above. 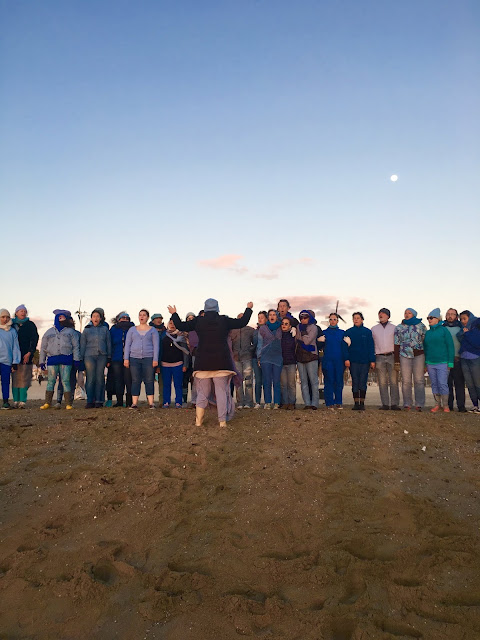 I've always said the beach is kind of my church, and never felt that more so than standing there with a big group of people honoring both our town, nature itself - and our place in both. 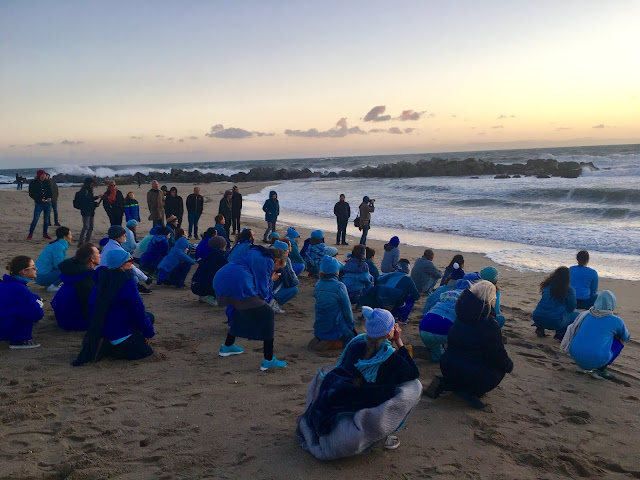 Congratulations and thanks to the Body Weather Laboratory and everyone involved in making this  memorable day about a dream in Venice come to life. It will stay with us for a long time to come. 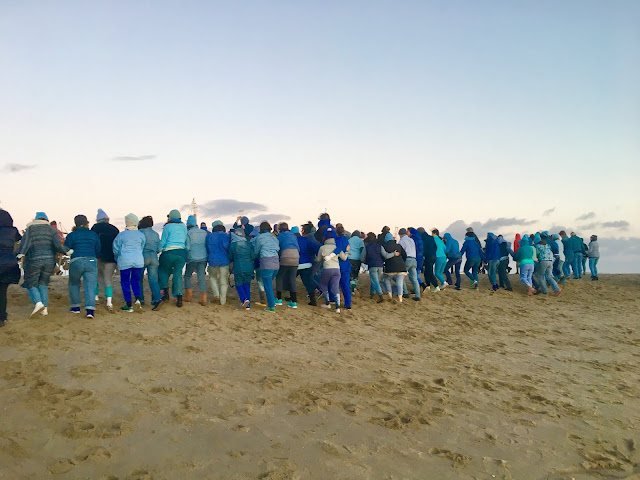 May it inspire others to treat Venice with the same respect and adoration, as we together realize that time truly is a façade - and it is what we make of it. So dance in the streets!