Brandi Carlile In Conversation At The Grammy Museum

I first heard Brandi Carlile about a decade ago on KCRW, and immediately looked her up after hearing her gorgeous, career-making song, "The Story". I was obsessed with that album in 2007, and then life got all busy and I lost track of what she was up to pretty much since. The Grammy Museum invited me to come to an evening of conversation with Carlile last night, and now I'm all back to being a super fan. 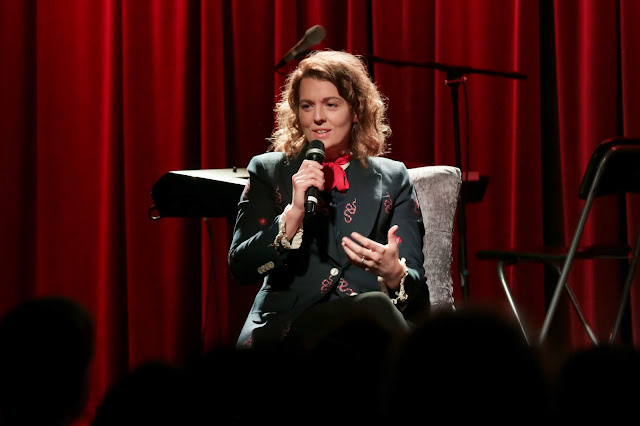 Slicked up in a black and red suit, Carlile took the stage to have a sit down chat with The Grammy Museum's artistic director, Scott Goldman for what turned out to be an extra insightful conversation that they allowed us all to listen in on. The audience was stocked with absolutely dedicated fans, who responded ultra-enthusiastically for everything Carlile said and played. With good reason. When Goldman introduced the Grammy nominated Carlile as "One of our very favorite people in the world", an audience member yelled "Ours too!" The admiration in the room was palpable. 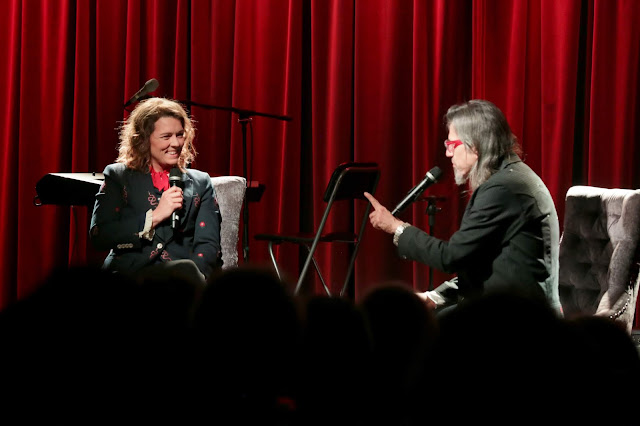 By The Way, I Forgive You was the latest album (and her 7th) being promoted by Carlile, and though I've not yet heard it in its entirety, after what I heard last night, it's a must-own. Produced by my old pal, Shooter Jennings, and his old friend, Dave Cobb, the songs I heard simply soar. Carlile and her identical twin partners, Tim and Phil Hanseroth, have created something very special yet again.

Goldman kicked things off by asking Carlile about the genesis of the new album, and she shared that it all started with a memory that had haunted her since she was a teenager. She had attended a Baptist church and really wanted to be baptized. She did all the studies, invited all her family, wore her bathing suit under her clothes, and on the Sunday she was to be dunked, with all her family waiting in the pews to observe, the Pastor told her he couldn't perform the rite due to the fact that she was out as gay. Her wife told her she should forgive him for that pain he had caused her so she could let it go. So she did, via this beautiful new piece of work. She spoke to how the concept of forgiveness should be more than just a White America hashtag like "#blessed" as it's really "An emotionally radical concept ... I think it cures cancer." I think she's right.

About working with Jennings and Cobb, Carlile said, "They were like two kids in the basement building a spaceship - with my stuff." She added, "There was a lot of drinking." They allowed her to expand her notions of what is possible when recording, and she very seriously said, "I'll never be the same ... and we'll do it again." (That garnered a whole bunch of happy shouts). 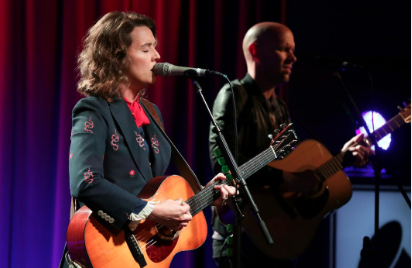 Goldman dug into some individual tracks on the album, and asked about "Fulton County Jane Doe", which is the true story of an unidentified body in Fulton County, Georgia that was found in a field and never i.d'.d in 30 years. She had a tattoo of Jesus on her hand, and it haunted Phil Hanseroth until he had to write her a song. And it's a beauty.

"Sugartooth" is about the opioid crisis, and another true story about a friend the band lost to addiction. As a mother, Carlile now looks at everyone as someone's baby, and this man that didn't make it also needed a song. It's lovely that people who probably thought they'd be forgotten are actually now remembered through song for always. And they were someone's child.

Carlile is also an activist - thank you - and is very involved in depoliticizing children, and wants to "Bring compassion to the free movement of displaced people. I want to humanize people ... I want to make a mark and have my kids be proud of me." Mission - accomplished. She cracked people up when she added, "And I know how to make things rhyme."

Joni Mitchell was on constant rotation while Carlile and the Hanseroths were making this album, and Carlile put all her songs to the "Joni Mitchell Test" that referred to a quote from Mitchell who had said that if you hear her songs and wonder about her life, she wasn't doing her job. If you heard them and thought about your own life, that's the goal (I paraphrase). Well, another mission accomplished.

"Mother" is about becoming a mother to her daughter, Evangeline, and the feelings that went along with not carrying her own child, and also not having any real "Gay Parent Template" from which to work from or glean advice. She didn't feel worthy of the word "Mother", then embraced those feelings and wrote about them ... resulting in a song that for sure passed her Joni Mitchell Test.

"The Joke" was inspired by Freddy Mercury, and "We Are The Champions". She said that Mercury was shameless in being a drama queen, and though every sports team has co-opted that Queen anthem for themselves, Carlile always saw it as a song of triumph for the LBGTQ community - and now I see that classic in a whole new light. 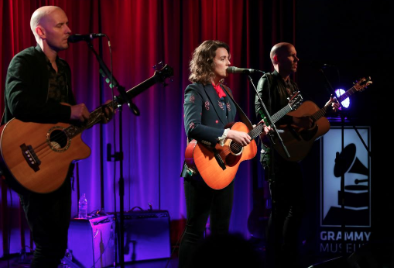 In talking about her partnership/friendship with the Hanseroths, Carlile said that "We even live on the same property now, so it's gotten weirder and weirder." Though they all three take a different approach to song writing, she said the relationship is a very fulfilling one ... and the results are clearly awesome. Goldman asked about Carlile working with the legendary string composer/arranger, Paul Buckmaster, and found out that a young Carlile even had a poster of the dude on her teenage bedroom wall! She got obsessed with him while doing a book report at 11 on Ryan White, the young AIDS activist who was close friends with Elton John ... whose music turned her on to Buckmaster. When they finally met when she was 16, she played him a song and he cried (and he also cried about Bach ... about olive oil ... he was apparently a very emotional cat. I get it.). He told her he'd arrange her songs when she grew up, and he held true to that promise ... and By The Way, I Forgive You was the last album he live-conducted before he passed away last year. "The song 'Party Of One' is all him." Chills. And a lump in the throat for good measure.

When asked about the album's cover art, Carlile admitted to having a massive crush on its artist, Scott Avett (of the Avett Brothers, who is also an excellent painter, judging by this cover). "Have you seen his face?! He's BEAUTIFUL!" swooned Carlile, adding that "He paints earnestness." She also admitted that flying to North Carolina to be painted found her renting a car for the first time in her 37 years, as the Twins have always taken care of hauling her around the country. But she did it! 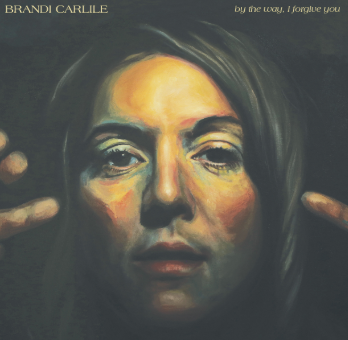 The conversation then veered from her admiration for Joan Baez, Emmylou Harris, Lucinda Williams and Patti Smith on to her Cover Stories project where artists as diverse as Kris Kristofferson (!) to Pearl Jam, Jim James, and Dolly Parton covered songs from The Story in a career-affirming achievement. That album alone shows the respect that Carlile has earned since bursting on to the scene in the Aughts.

Goldman opened things up for questions, which ranged from how does she find the time to write ("Songwriting just happens to me, usually at really inconvenient times.") to when she knows a song is done ("I get my affirmation from an audience ... they tell me when it's done. The songs don't come alive until I perform them.") to how drummers change the meter of things - from a drummer in the audience who hinted that she was available. Questions asked and answered, Goldman invited Carlile and The Twins to play some songs for us, and the room hooted and hollered its excitement.

"By The Way, I Forgive You", the title track from the album was first up, and truly beautiful with its harmonies and acoustic guitar picking - as well as its sentiment. "I'm doing just fine, except any time I hear that song" ... instantly relatable (passing that Ms. Mitchell test again).

"Cool, Man.", was Carlile's response to the thunderous applause they got for that one, then intoduced the next one by saying, "Here's a Freddy Mercury song", as they launched into "The Joke". Carlile just BELTED this one out, and I found myself with the lump in my throat that Carlile alluded to when writing it. SO good ... especially when the last lyric rewards the whole song, with the line, "The joke's on them." Awesome. 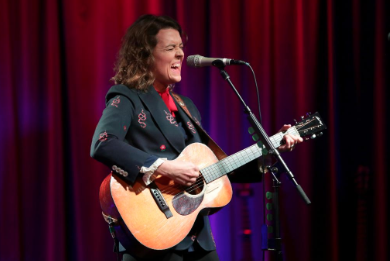 "Mother" was preceded by an anecdote about Carlile's young daughter, Evangeline, having a current obsession with death. After a dog and some chickens died, and being explained about death to, the little girl said to her baby brother, "Elijah, I love you, but you'll die too." Out of the mouths of babes! The song was tender and touching, and full of throat lumps, and great lines like, "When we chose your name, we knew you'd Fight The Power too." C'mon. That's great stuff.

The band closed the evening with "Whatever You Do" ... and its hard truth about life and love, singing, "I love you, whatever you do, but I've got a life to live too." We've all been there, and as Carlile's voice soared to the Heavens to finish it, the room collectively rose to our feet, almost involuntarily. It was just that good. 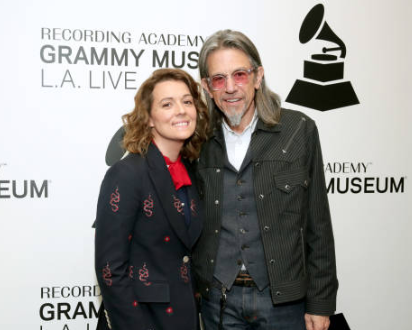 They took their bows, waved, and were off to catch a plane. I've slept on Carlile's career for a while, but I'm back, and grateful to know that there are still really good musicians that are also really good people. A rare combination, which Carlile embodies in thought, song, and deed. Treat yourself to her new album (and listen to it as an album, how it was meant to be listened to), and do go see this super talent any chance you get. Prepare for lumps in your throat.

By The Way, I Forgive You is available everywhere.


*Photos Courtesy of Rebecca Sapp/Wireimage.com for The Grammy Museum