There was another enchanting evening at The Hollywood Bowl on Sunday night, when Big Thief, Gillian Welch, and Father John Misty took over the venerable Los Angeles landmark to weave musical spells under the moon and stars. To say it was utterly gorgeous in every way would still be an understatement of this sublime gift of a night. 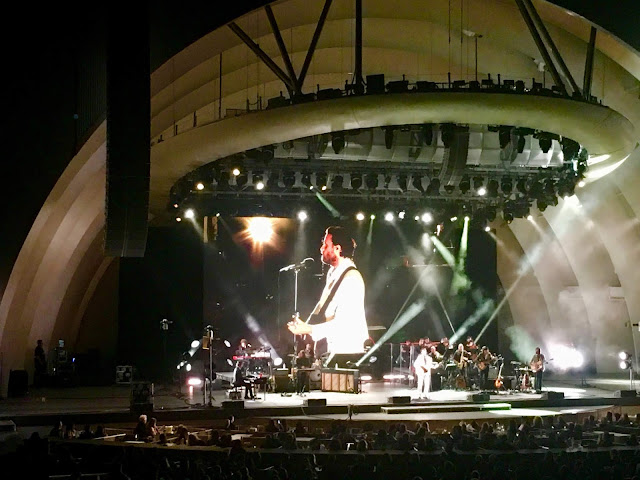 I'm sorry to say we missed Big Thief due to the always congested journey to the Bowl - and that I was told they only played three songs in their set. Our box neighbors described the band as "Like a female Father John Misty." I could get into that. Will definitely check out, and apologize for missing their Bowl debut. 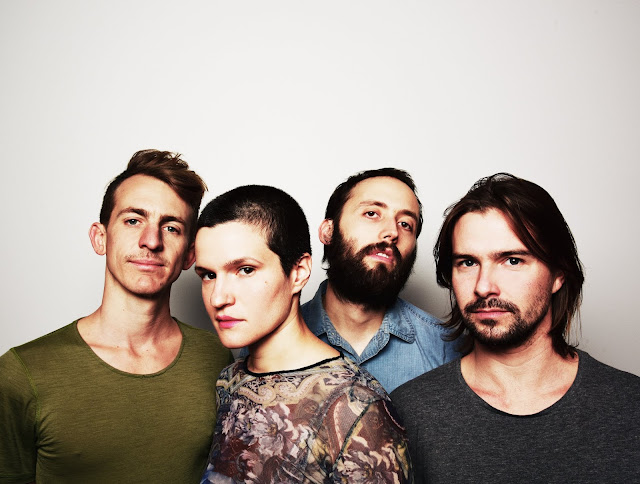 Gillian Welch is an Americana treasure, and she and her musical partner, David Rawlings, wove their tunes together in such a natural groove that you could close your eyes and imagine yourself on a porch swing in the country somewhere, just listening and loving as the stars came out and completed the perfection of their set. 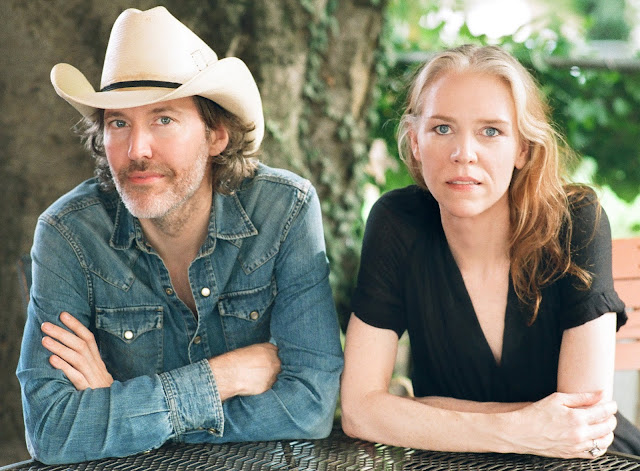 We wondered why the crowd was so sparse in the picnic areas when we arrived, and it was because nearly everyone was already seated and raptly taking it all in. This is rare at the Bowl when it's still light out, and once seated, we understood why. I'd never seen Welch (looking rather like Joni Mitchell) and Rawlings (looking rather like Dwight Yoakum) live before, and it really is something. The duo perfectly compliment one another, and with highlights like "Look At Miss Ohio", "Hard Times", and "Revelator" featuring such deep musical prowess you really were left with mouths agape and minds pretty much blown. Welch's playing of banjo - and even knee-slapping - are just as great as her lush harmonies, and Rawlings guitar picking is the glue that holds it beautifully together. Their final song was a cover of Alfred E. Brumley's classic, "I'll Fly Away", and the sky was such an unnamed, perfect dusk color at that moment that one really did want to fly away right into it. I'm now an even bigger fan of these ultra-talented songsters who perfectly bridge the past to the present, bringing us all together. Wow.

That wonderful performance led into an intermission of picnic and wine enjoyment as acid-trippy music played over the p.a. and swirled everyone into a mellow groove. I'd read recently that Father John Misty likes to micro-dose on acid these days, and this music then made sense as the prelude to his Hollywood Bowl debut. 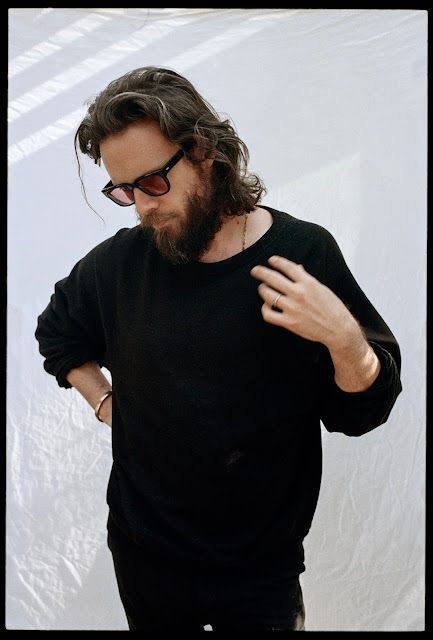 Touring in support of his recent album, God's Recent Customer, FJM (as I affectionately referred to him throughout the evening), seems to have blossomed from a kind of sarcastic social commentator to deeply reflective pop poet. My usual photographer (and brother), Paul, skipped this show, and texted me "Father John MEHsty", to which I took umbrage. But I also got it. Misty (aka Josh Tillman) has come off as extra-pretentious to some in past interviews and performances, but I've always just found him funny. And awesome.

Which he fully was on this night at the Bowl, playing his expertly crafted numbers so fantastically that my notes are rife with words like "Gorgeous!" "Epic", "Smart!" "Awesome lyrics!" (for all of these: "Funtimes In Babylon" - "Nancy From Now On" - "Chateau Lobby #4 (In C For Two Virgins)" - "Strange Encounter" - "Disappointing Diamonds Are The Rarest Of Them All" - "Only Son Of The Ladiesman" - "Total Entertainment Forever"), and Misty more than proved that he was ready for this majestic stage.

Old Hollywood footage was screened behind the band, and Hollywood references are abundant in FJM's lyrics, so it almost felt like a hometown show, though he's really a dude from Maryland. "Look out, Hollywood, here I come!" was more than a lyric ... it was a statement of arrival for real. I love this guy - and wrote that several times in my notes too. You could just read his lyrics and be mesmerized, but that they're accompanied by such excellent harmonies - and even elevated with strings and horns on several tracks - makes it all simply entrancing. Yeah, I'm a fan. A gushy one. 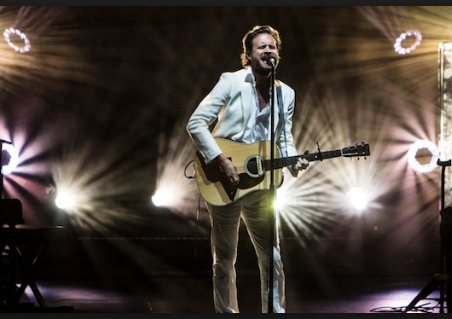 My companion for the evening was not, however, leading into this show. Another Meh-sty type of guy (maybe it's a guy thing?), unknown to me when the invitation was extended. By the time Misty got to "Ballad Of A Dying Man" though, I got the raised eyebrows/frown face of "Impressed" and a slightly begrudged "Good one" from him. "Mr. Tillman" was more Hollywood cleverness, and then the laser-lit extravaganza "Bored In The U.S.A." was the one that really turned my friend into a real fan. His grin was ear to ear, and held the glow of the newly converted. Bless you, Father.

"Hollywood Forever Cemetery Sings" kept us in Hollywood, and every song just kept getting better, until the lights and lasers and sheer mastery of showmanship crescendoed with "Pure Comedy" and the last pre-encore number, "I Love You, Honeybear" - which I still can't get out of my head. FJM said (and he rarely addressed the crowd, letting his wisdom come through lyrically), "It's been a hell of a night!" so truthfully, and again, understated. My friend just said, "Thank you, CJ", only all thanks should have gone to Father John Misty and his band. Hell of a night.

But it wasn't yet done ... the encore was even better, with FJM returning in his white-suited glory to thunderous applause and whistles (us) to give us "Date Night", "Real Love Baby" (which I was fully feeling), and the finalé of "Holy Shit" - which is exactly what I wrote in my now barely legible notes. Holy shit was exactly right. FJM finally left the stage, having given his absolute all, by saying, "Quite a night, y'all! Thank you very much!" No, Mr. Misty (now I want some Dairy Queen). Thank YOU. 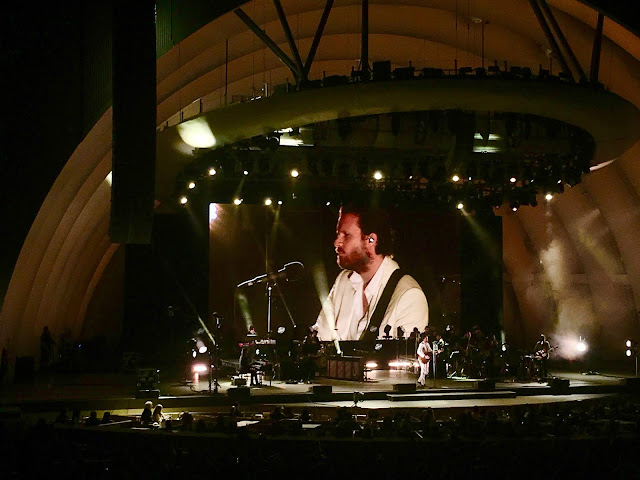 It seemed as if no one wanted the spell to be broken, as folks finished up their wine and sat there in our afterglow until ushers came to kick us out. Humming and whistling together, the droves made their way back out into the Hollywood night, having experienced one of my truly favorite experiences ever at The Bowl. And that's saying a lot. I even got to see someone be freshly converted to the gospel of Father John Misty. And it was very good (Genesis 1:31).