Let's Be Better Humans - With The I Have A Name Project

What an excellent morning. I had my gorgeous beach walk, and wound up chatting with a dude on a lifeguard tower all about the ocean and nature and how and if we can save it. He thought that by us even having that chat with each other as strangers was a good start. It was really good to know that there are others out there thinking like you do in these times. Then, on the way back from the sand, I saw this big, magic bus parked on the side of the road, with "Let's Be Better Humans" painted on both sides of it. I had to know more, and luckily for me, the bus driver was there. 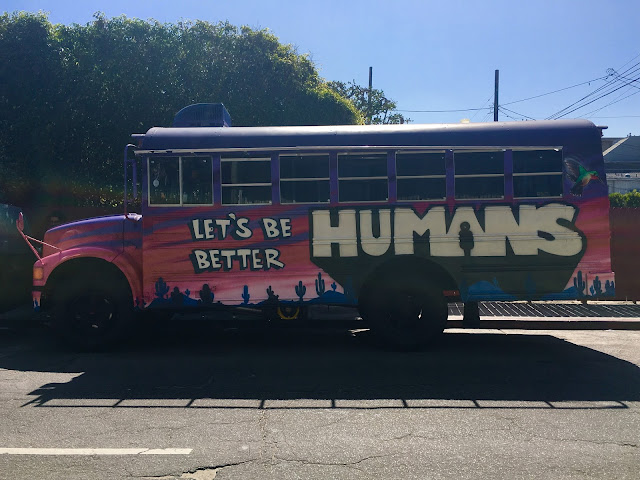 Jon Linton, founder of the I Have A Name Project was about to take off to Skid Row to go help the homeless, but invited me aboard the bus to tell me about his organization. Linton started this wonderful campaign after volunteering at a homeless shelter and being told by one of its residents that he was touched, because no one ever asked him his name. "You have no idea how long it's been since someone cared to ask me who I am. We are the forgotten, the walking invisible," said the homeless veteran, Chuck Ridgeway. That gave Linton both the idea to do something to help these people - and the name for it. (I had a similar experience myself while volunteering at PATH in downtown L.A., when a man told me it had been so long since someone had looked him in the eye. It's the little things that bond us together, and that is just basic human respect.) 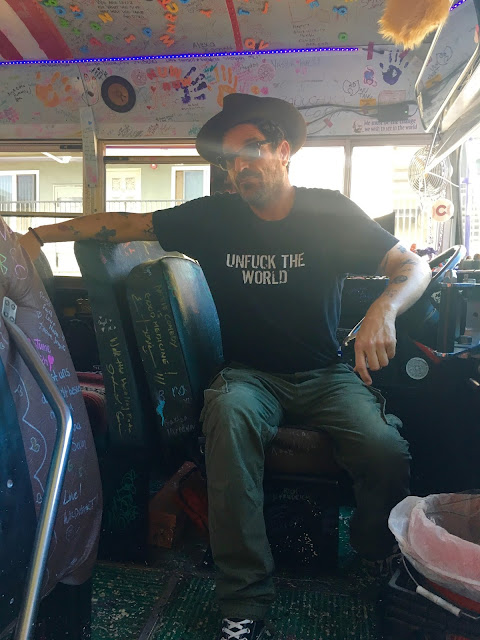 Linton began photographing the plight of the homeless, which led to feeding and clothing thousands in need, photographic exhibitions, mural projects, and a book. The Let's Be Better Humans revolution began because ... just look around. We need a revolution of love and humanity. We exist for one another, we can make a difference, and we can leave this world a better place than we found it ... but only if we do better.

The Let's Be Better Humans hits the streets twice a month to do just that. They distribute backpacks filled with socks, a rain poncho, snacks, and bottled water. FYI - Backpacks and socks are the most requested items in shelters, and the least donated. There's one way to help right there. Linton had just been in Venice to give out clothes in a little pop-up shop they created on the Boardwalk, and they were cleaned out in no time flat by the grateful houseless residents of Venice. 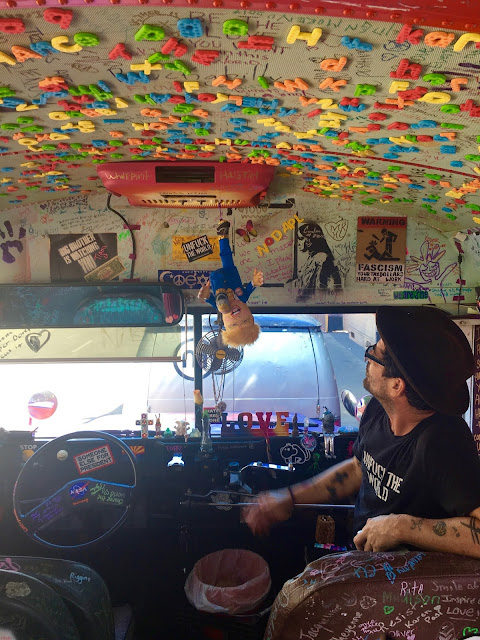 This is the kind of thing I just love, and I was honored to accept the marker Linton handed me to sign one of the seats of the Let's Be Better Humans bus. People from all over have joined this revolution, and their autographs cover every surface of this fantastic vehicle. My heart was full as I stood on the sidewalk, waving farewell to Linton as he honked and headed off to Skid Row. It does the soul good to know that there are still good people doing good works out there ... but it does it even better to do them yourself. 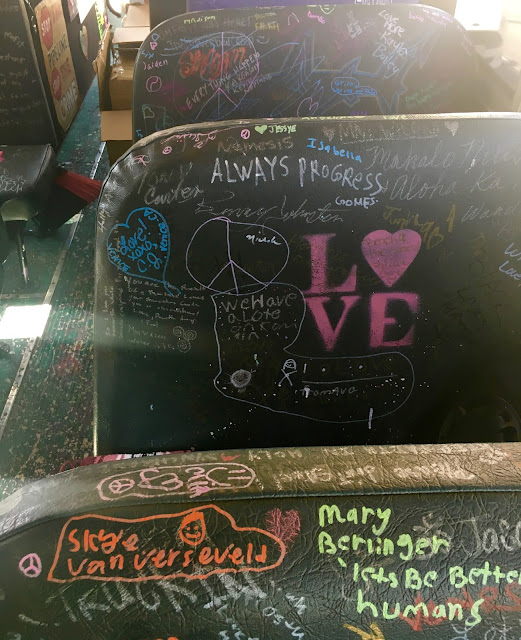 You can do as Linton says ... "Whether it's advocating for the homeless or the planet, you can make an impact. Don't wait for a hero, become a superhero. Never underestimate the power of ONE. Follow your heart and step into action."

Done. Thank you for an inspiring moment of an already inspiring day, Mr. Linton. And thank you to Venice for still being a place where magical encounters like this are not the exception, but the norm. C'mon, Everybody! Let's be better humans! One Love.