I always love the Abbot Kinney Festival, and have always considered it Homecoming weekend for people that have lived in and loved Venice. This year, it was especially so, as I'd been gone a month, and not exactly positive that I was coming back. Seeing all the friendly faces and having all that fun absolutely confirmed that I made the right decision in doing so. 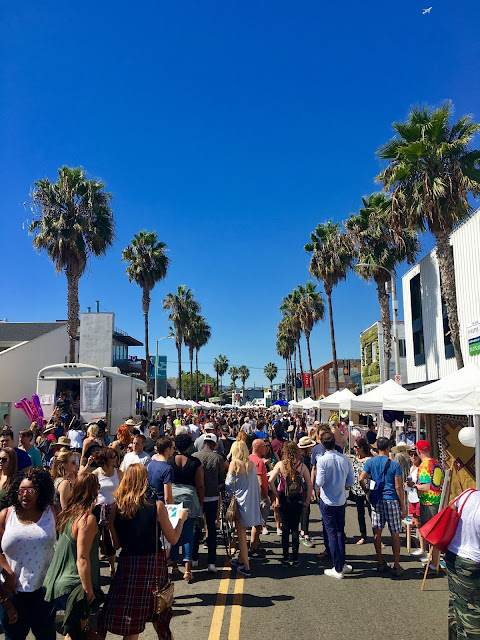 It wasn't just "Oh, hey, hi" style bumping into people either. It was the eyes and mouths wide open, arms outstretched, grabbing each other and rocking back and forth while hugging extra tight and yelling kind. Like every two feet. The whole day was awesome, and I'd like to rewind and do it all over again so I could see even more people and cool things. So, to relive it a bit ... The day was perfect, let's just get that out of the way. Blue skies, no clouds, bright sunshine, slight breeze to make it all comfortable ... you could not ask for more, weather-wise. On the walk down to the Festival (after a resounding Vikings victory in the morning!), we came across two little enterprising kids that had a lemonade stand on the outskirts of the Festival. I didn't have my notebook along, but if memory serves, these gems were Hayden and Phoebe. It was the best customer service I had all day, and I wish them well in everything they do, the little dolls. Thumbs up! 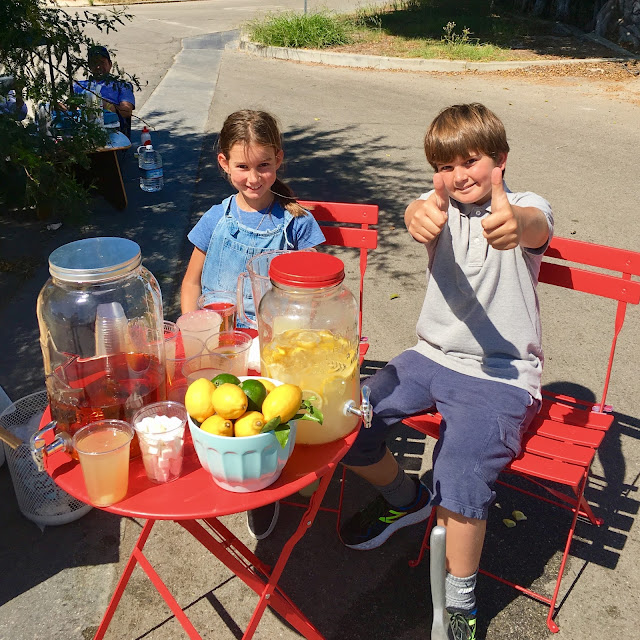 We had a slight game plan for doing and seeing it all, but when you keep bumping into the incredible people of Venice, plans change. I honestly could have stood in one spot all day and just talked and caught up with everyone going by, but we did our best to keep it moving. We had to stop into The Green House and have our annual Festival photo with our longtime friends, who I LOVE, and was so happy to see. 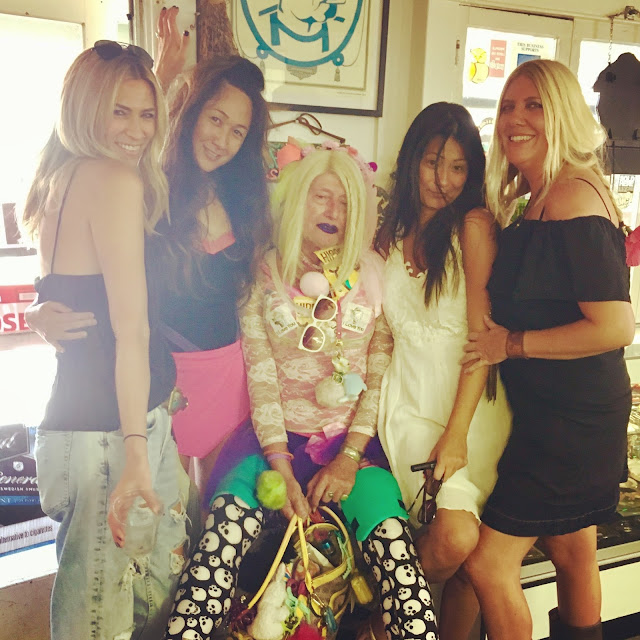 The Brig (and all the Beer Gardens) and Trim were going off with more fun, as usual, and the lines were long everywhere you looked. This might have been the most packed Festival I can remember. When you got to the area where the food booths were on both sides, the middle of the street was nearly impassable. Yet no one really seemed to mind. 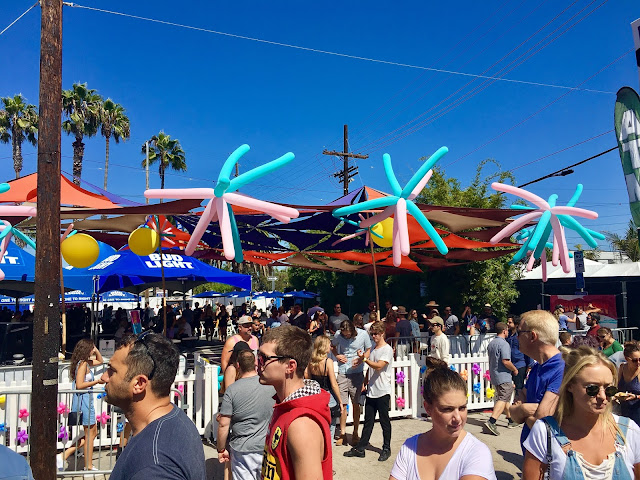 Patience was key. As was love, as Venice legendary activist, David Busch was there to remind us. "Love is not a point, but a circle." And I was enveloped within that circle all day long. 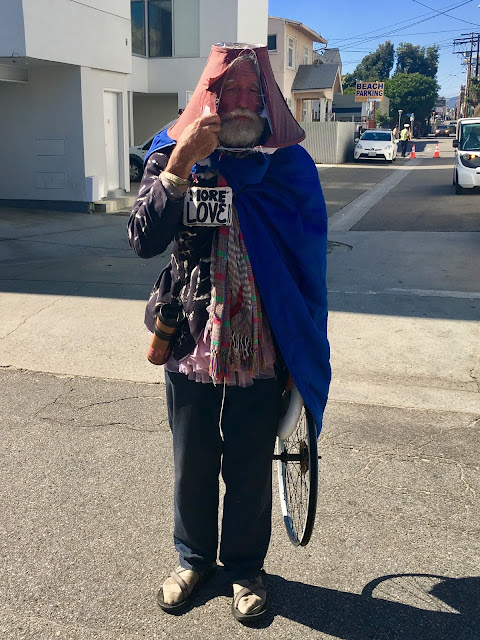 The Venice Historical Society was there to remind people of what has come before ... and to emphasize those great days when there were no chain stores on Abbot Kinney - where they do not belong. It re-inspired me to get my Venice book launched, as people today need to know what made this place so cool to begin with ... and it certainly wasn't the rampant greed you see today. I had a friend say today that he didn't go yesterday, because he felt it was all about commerce now. That's too bad, because this day really is about so much more - mainly COMMUNITY and our NEIGHBORHOODS. That was felt ... so much more than the presence of the brand name jerks. In fact, I didn't even notice them with all the great people around. I also saw several "Snapchat Must Go" type shirts and stickers. Good for them/us. 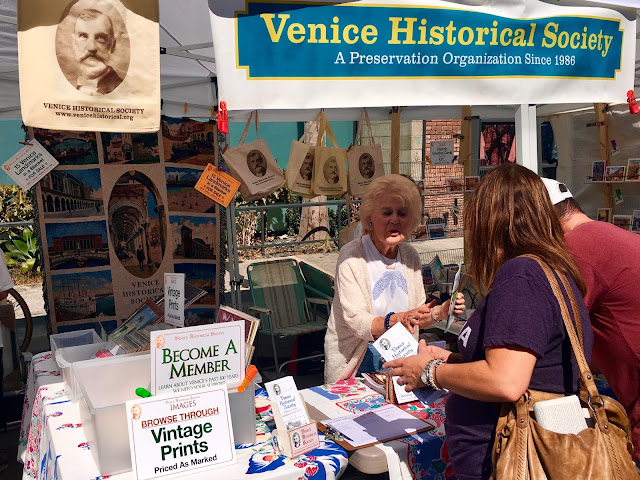 It was a delight to see my friends at the Venice Pride booth, all happy and celebrating the recent victories of both the Rainbow Lifeguard Tower becoming a permanent fixture on the beach, and the announcement that The Roosterfish will indeed by reopening, by the fine fellows of South End up the street. 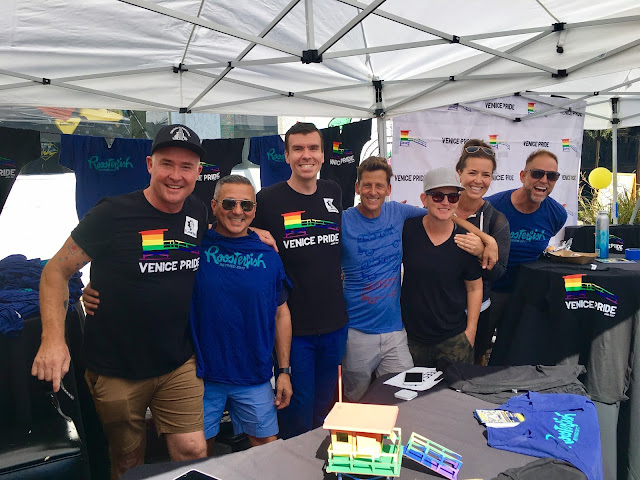 It was rumored that The Fish would be open as a pop-up for the Festival (which we all wanted dearly, not least because the ladies bathroom lines have historically always been the shortest there), but that didn't happen. Not sure why. There was a BBQ place out front, so it felt all festive there anyway. 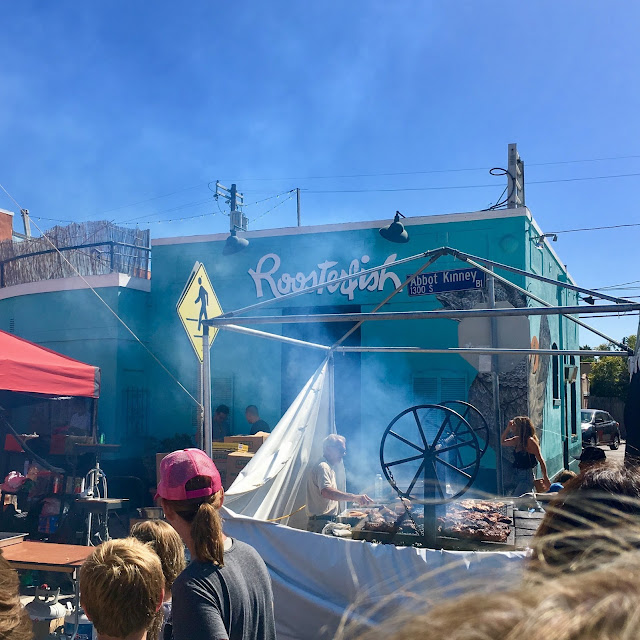 There was sensational music all day, on a slew of stages. We caught some great funk, we missed the Superbroke Orchestra, heard Citizen Cope was playing somewhere ... but you've only got one body, and you do your best. 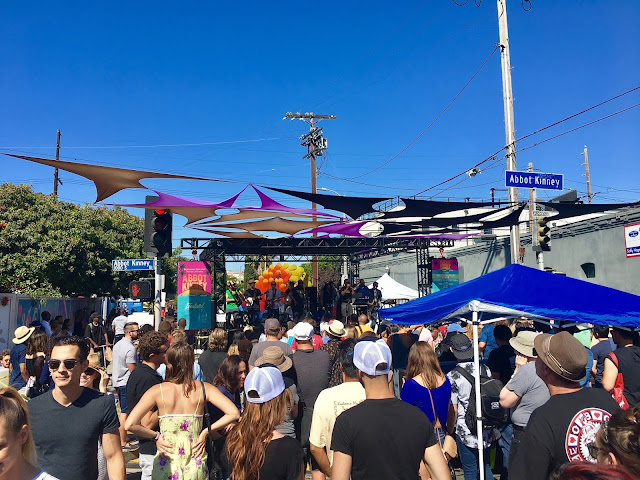 The Venice-Brooks Festival again piggy-backed on the Abbot Kinney Festival this year, making it even harder to do and see it all. Which is fine, because it was really fun, with reggae d.j.'s making it feel like a tropical get-away all day. 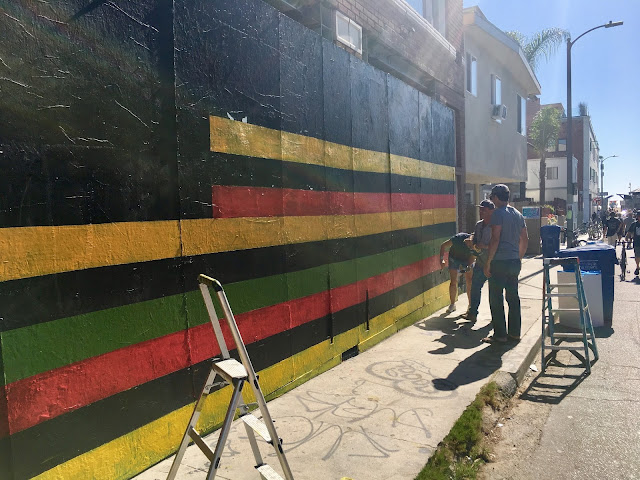 They had AWESOME music, great cocktails, cool merchants, fun people ... I just wish it was its own Festival day, so we wouldn't have to be spread so thin, racing from one end of Venice to the other all day (you definitely get your steps in on this day). Too much of a good thing is not a bad thing. 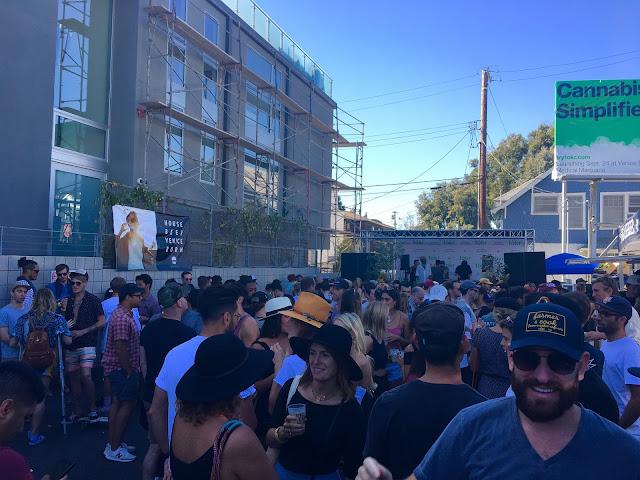 General Admission and Fioré Designs put on the alternative festival, and it gets better every year. I would have loved to have hung there all day, but my good friends were playing at the "Locals" stage on Andalusia, and we had to get back over there to reunite with all the homies. 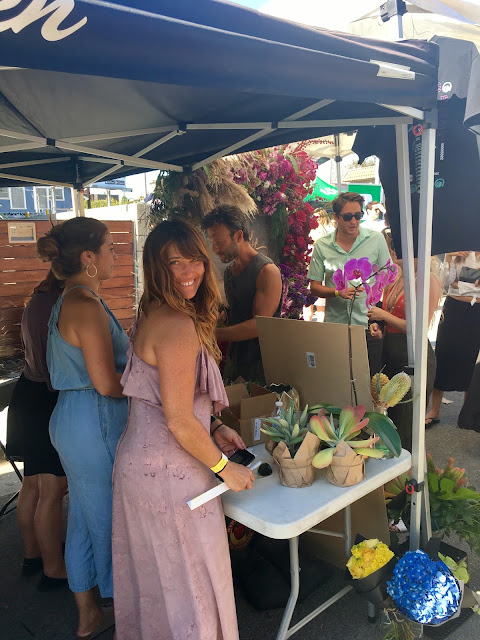 I didn't really stop in to the Kids Area, but was very impressed to see this one little girl giving her all at the hammer game thing. Girl Power! We almost got our faces painted for the fun of it, but those dang kids made the lines too long. Oh, well. 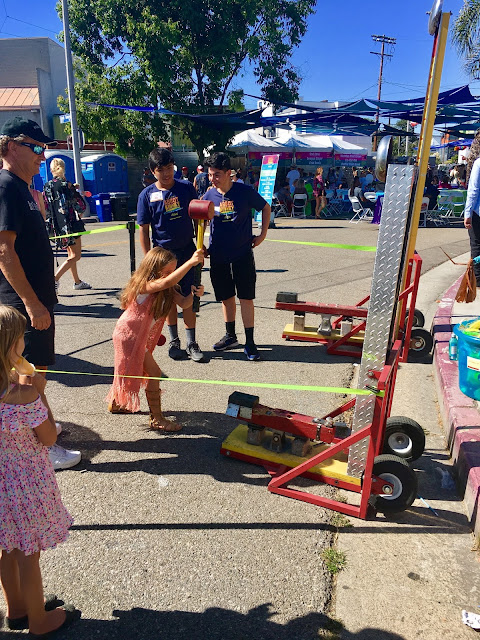 Speaking of kids, I got to meet my new, little friend Coyote, enjoying his very first Abbot Kinney Festival! He seconded that it was one of the best ever. Shout out to Laura and Strader for bringing such a cool cat into Venice ... we'll need him. 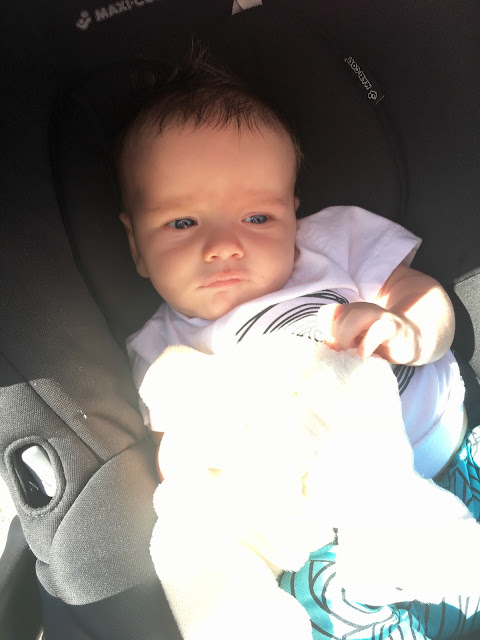 The sidewalk chalk street was great again this year, with neighbors and friends all coming together to create a mandala of love and creativity. I can't wait until the Chalk Festival is its real own thing. (A different day than the Abbot Kinney Festival, please!) 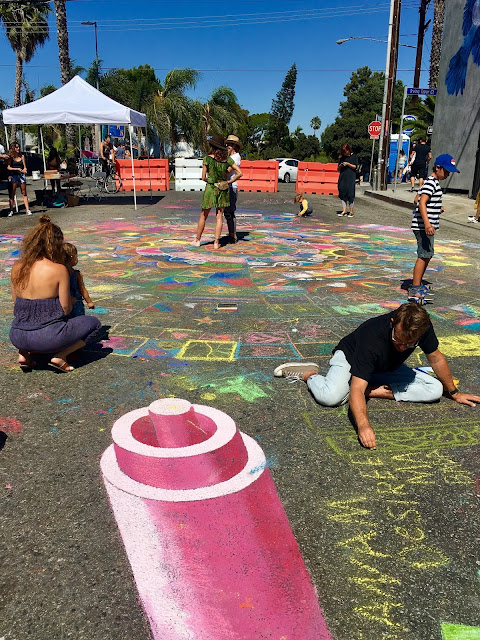 I was happy to see the fine Venice activists still at it, showing all who came by that it's a tradition in Venice to resist. And resist we will. 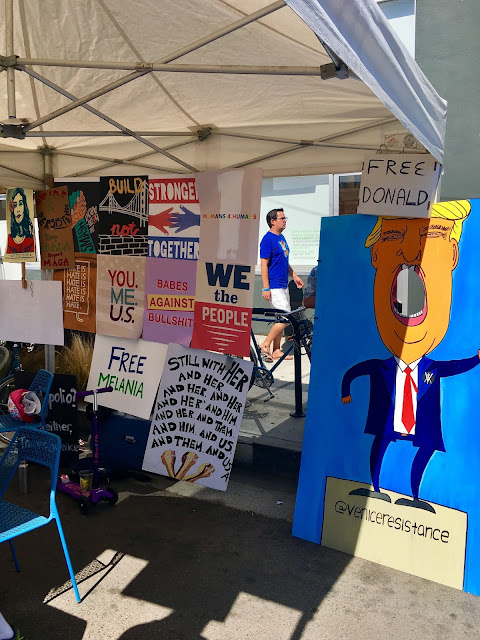 The Locals stage was well under way by the time we got there (after again stopping every two feet to greet a new face that I loved), and it was truly a headquarters of all the longtime Venice beloved family. 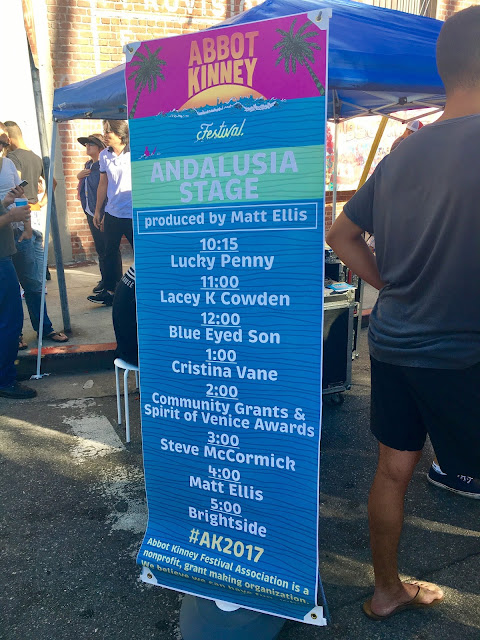 Logistics made me miss Lacey K. Cowden, Blue Eyed Son, and Steve McCormick (dang it!), but we got there just as Matt Ellis took over the stage, bringing up Paul Chesne just as we arrived for the aptly titled, "They Don't Make Them Like They Used To". Yes, of course, it was awesome. 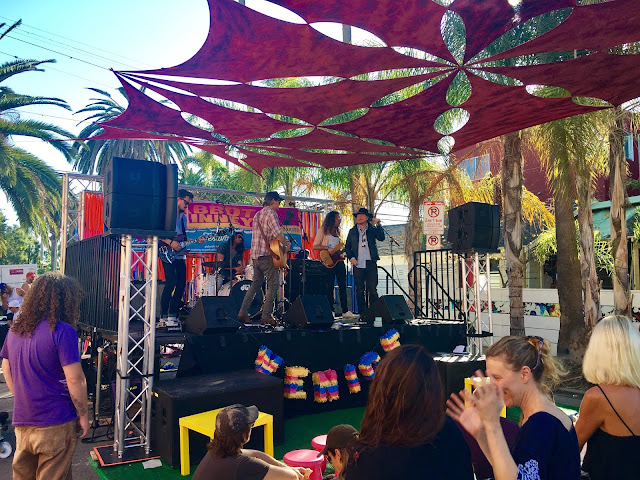 With so many of the friends now gathered in one spot, it made it difficult to leave. Especially when the backstage area featured refreshments and a bathroom. We posted up here for pretty much the rest of the fest ... it was just too easy. 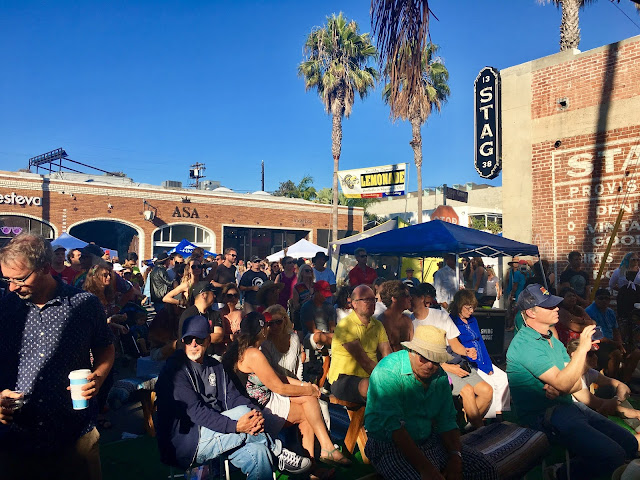 The day always go by too fast, but then the after-parties kick in. There were several to choose from, so we went to the one that our friends were going to be playing more music at ... the party spot at the corner of South Venice and Abbot Kinney. We got turned on to a great new band there, Fox Trails (We thought they were saying Fox Hills, but I'm pretty sure it's Fox Trails), that we dug a lot. They sounded like new Harry Styles a bit - and that's a compliment I'm surprised to be giving, but it's true. There's maybe a little Incubus vibes in there too ... good stuff. Good times. 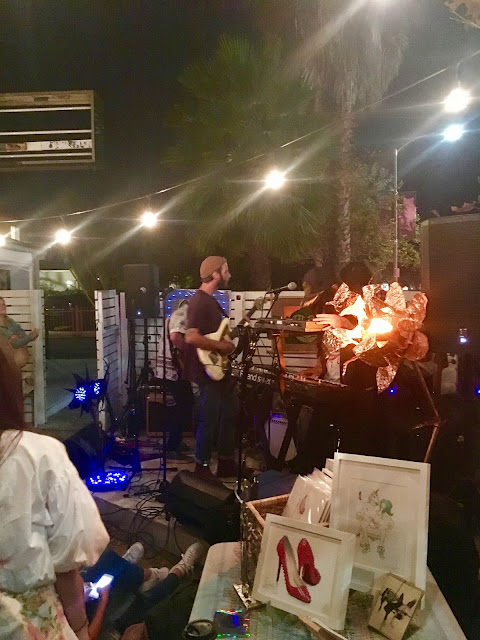 It was such a perfect Venice day, and I was so happy to be back, you just wanted it to go on and on and on ... and it did, until fatigue and dehydration forced us to throw in the towel long after the sun had set. Always the best day of the year in Venice, this year's Abbot Kinney Festival was even better than usual, perhaps because there was no taking it for granted. I KNOW how much I love it here, I KNOW how much the people mean to me, I KNOW that this is still where I belong, and deep down, this is still the Venice we all know and love ... you just have to feel it like we did yesterday, and you'll know too that Venice Lives! 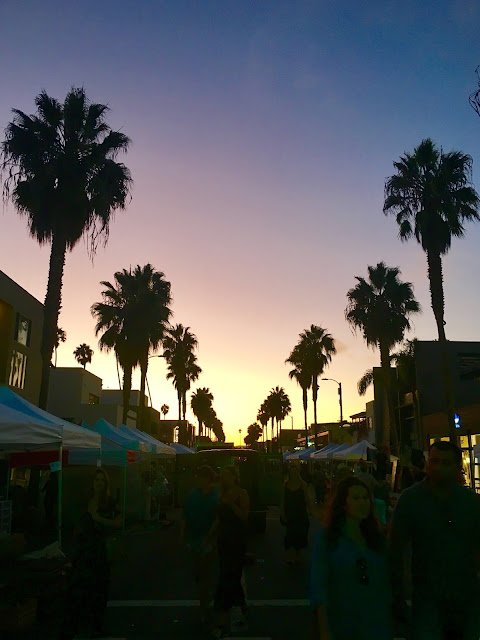 Thank you to one and all for a most excellent Venice Homecoming! It was beyond special. I love you all.