The Women's March on Los Angeles took place on last Saturday, and it was one of the most incredible, beautiful experiences of my life. 750,000 women and the people who love them took to the streets of downtown Los Angeles to make our voices heard, to stand up for social justice for EVERYONE, and to show that we are all about love. My heart swells anew just thinking about that glorious day. 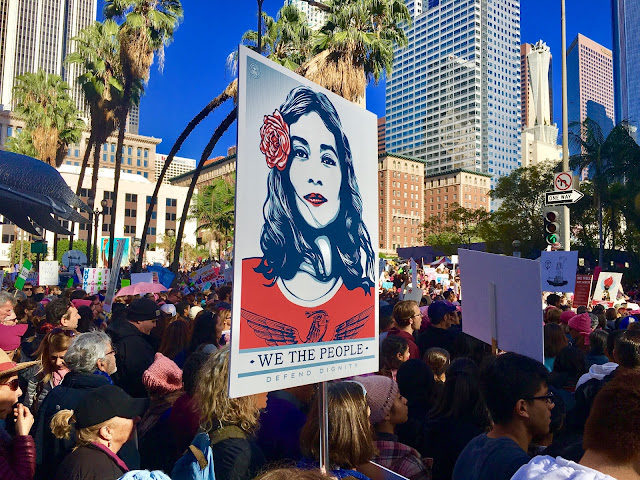 My friends and I had attended the Anti-Inaugural Ball with Prophets Of Rage the night before, and got a room at the Ace Hotel so we could stay over and not have to deal with getting into downtown the next morning. This turned out to be an extra-smart decision, as the lines to get on trains and buses were hours long, if you could get on at all. We got up to go down and have breakfast, and were delighted to see that the lobby was FULL of people dressed in pink and carrying their hilarious, pointed signs of protest and solidarity. It was already excellent before we even stepped out on to the sidewalk. 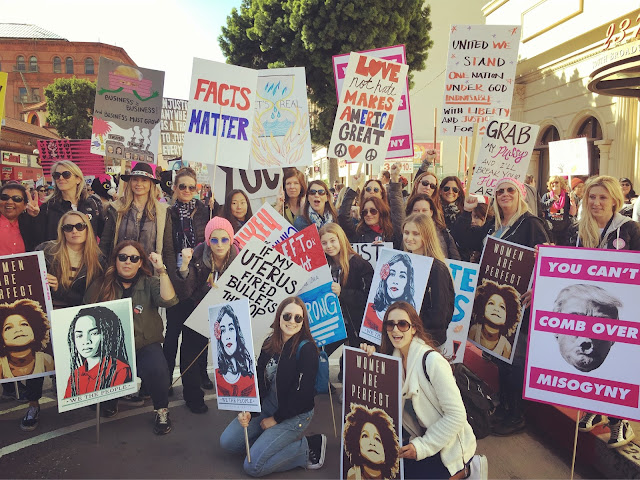 Our gang all met in the lobby, took some group photos, and then headed out to the start of the march at 6th and Hill streets. Before long, we were sandwiched in by several thousand people deep on all sides. The remarkable thing about the entire day was the love and support given and felt by everyone. It was extra polite, extra compassionate, and overwhelmingly wonderful all day long. It's not easy to stand in one place for so long, and the only complaints I heard all day had to do with full bladders. One guy in the crowd declared that on this day all bathrooms were for ladies first. Bless him.

We stood at Pershing Square and listened to speakers for so long (Venice's own Lydia Ponce among them!) that the  crowd began to chant, "Let's March, Let's March!" only to find out that we couldn't march forward at all because the City Hall area we were meant to be marching to was already full of thousands, so there was nowhere for us to go. Rivers of humanity began to branch off into all the streets and alleys, flowing as close as we could toward the general area of City Hall, chanting all the way. 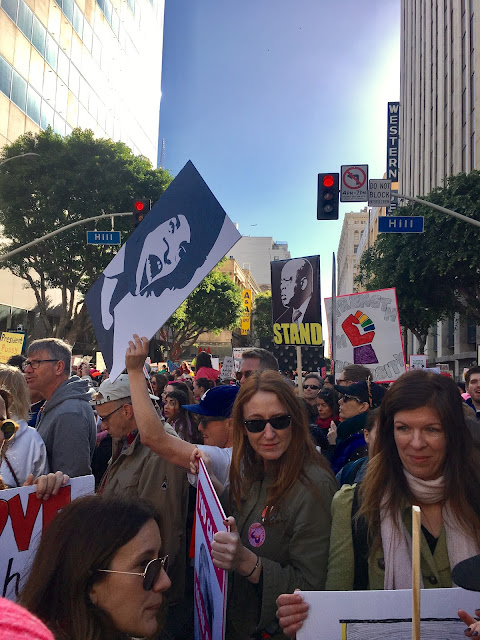 The signs were so clever, witty, and creative that we were pointing them out and cracking up all day. Someone absolutely has to make a book of them all compiled, as one was better than the next. I loved the one that said "I'm with Her" and had arrows pointing out in a circle around it to all of us. There was so much solidarity and love flowing through the city, that I caught myself choking and tearing up about every five minutes or so. People shared their snacks, made way for people to get through, gave each other shirts and stickers and fun stuff, and generally smiled ear to ear in awe of it all. There are some who say marches don't matter, but to anyone who was there, they know better. We know that the entire world is watching, and that they saw who we really are on this wonderful day. That the good in us vastly outweighs the abysmal. That we will stand up and speak out against prejudice and hate. That love will always prevail and that the People will always have the Power. And the entire World had our back, showing out in nearly every country in solidarity, even down in the Antarctica! 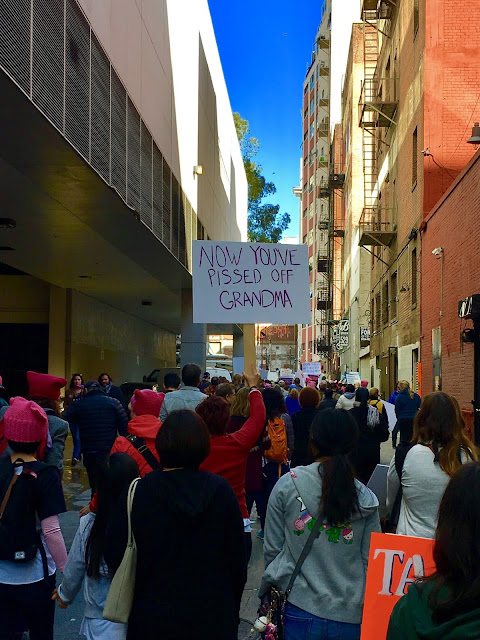 My gang never got close enough to the City Hall stage to hear those celebrity speakers and bands, but I heard all about it, and it sounded cool, but we were more than happy to see the regular, everyday people all in it together. I was impressed at the number of men marching together in support, and particularly loved one young man who wore a jacket emblazoned on the back with "She Is We!" Amen. Awomen.

The day was exhausting, but spirits never once lagged. When starvation began to set in, and the sun began to set, we stopped into a pizza place to grab a slice to tide us over for the journey back home. It took forever, as most everything did on this day of the incredible turnout that no one could have expected. Once we got our slices (burnt, after twice asking about them), I heard a young, black man in line yelling that he wanted his money back, that he'd been ignored twice, and was not leaving until he got his money back. He was upset, and it was the first inkling of any bad mojo I saw or heard all day. That didn't sit right with me, so I went over and asked him if I could help. He went off, chest all high and amped up, about how he'd asked twice for his calzone and they were ignoring him because he was black, and he wanted his money back. I told him that we too had waited long and asked twice, and that it really had to do with how crazy busy the day was, and nothing to do personally with him, I was sure. He eased up a bit, and I told him that we're all in this together, and the message I took from the day most was that we all need to look out for each other now, more than ever. I hugged him, and when I pulled away, he looked a little teary, and said, "That was really brave." I didn't feel that way at all, I just really felt like we're all one. It's about time we start acting like we're just one race, the HUMAN RACE. I think we both walked away from it feeling a little better about it all. 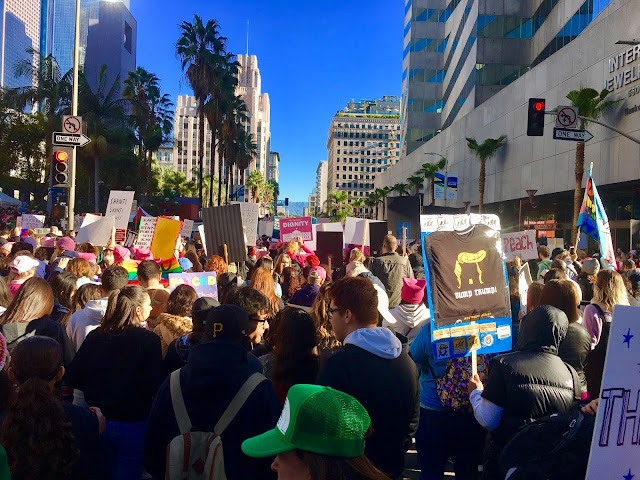 That's what the entire day was about, really. Making us feel a little better about it all. Letting us know that the People hold the power. That Love will always trump Hate, every time. I truly hope you got to be at a March in whatever city you're close to, because it was one of the most beautiful examples of humanity that I've ever been a part of ... that the WORLD has ever been a part of. And it MATTERED.

Venice had a strong showing at the March, as I ran into friends all day, even in the crowd of nearly a million like-minded Los Angelenos. There was not a single arrest among 750,000 people gathered together in tight circumstances. I only saw one traffic officer all day. No one was hurt. It was all love, as you would expect from an event organized by and for Women. The torrential rain we're finally getting took a day off and gave us the brightest, bluest skied day possible, only to return to downpours the next. It felt divine, and as a friend of mine said, "God knows what She's doing." 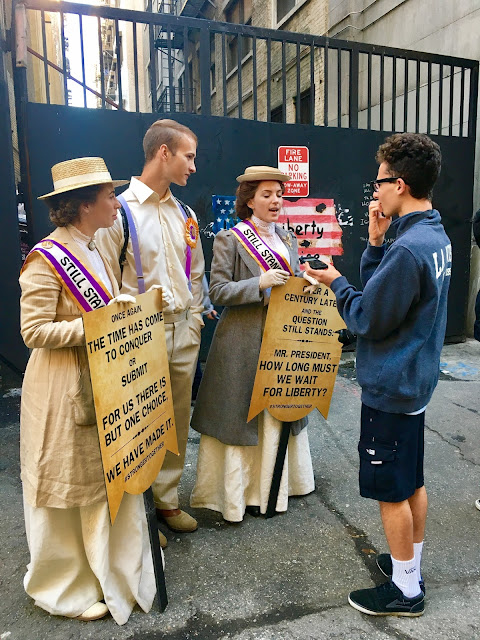 Eternal thanks and love to all who came together for the outpouring of love and strength that was the largest protest march in American history. It doesn't stop here. We must stay vigilant. We must stay united. We must resist hate and prejudice wherever it rears its ugly head, and we've got our work cut out for us with that one, for sure. We must always act with love.