"On The Scene In '17" is my motto for this new year, but I haven't been able to really execute because I've had this dreadful cold for pretty much the whole year so far. The show must go on though, so I headed down to the always great opening night of the 2017 L.A. Art Show at the Convention Center downtown, Kleenex in hand. 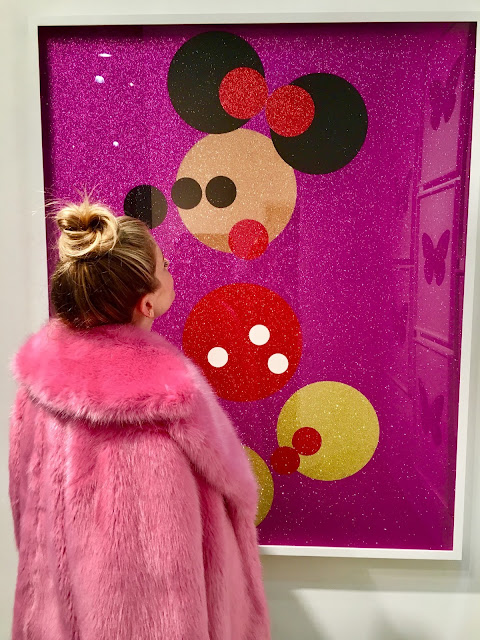 The line to get inside the hall was so long it was like we were trying to get into a Bernie Sanders rally last Summer (ahem). It went pretty fast, and there was good people watching while waiting, like this lady with a dress made entirely out of forks (who made it much easier for my friends to find me with her as a landmark - thank you!). 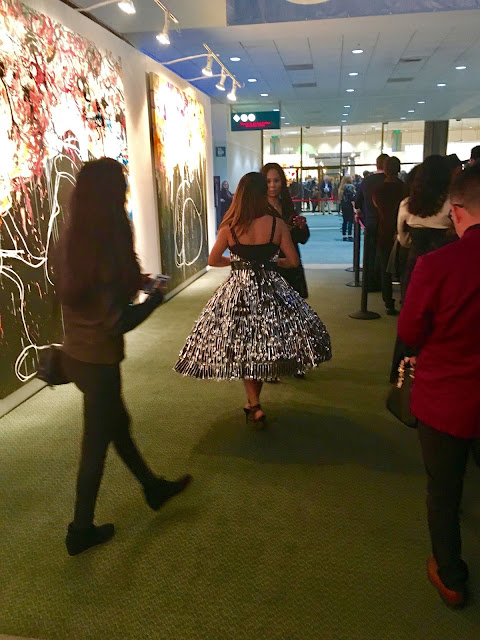 It's fun to attend this event with my brother, Paul, because he's deep in the L.A. art world and has a lot of great insight - but he also gets stopped every two feet to chat, so he needs to be abandoned at times if I was going to see any of the art in an already super-densely filled massive space crowded with art aficionados. 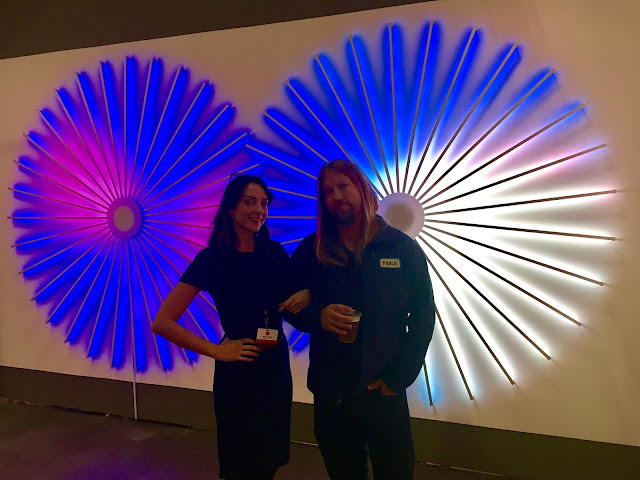 Aside from the intense line to get in at the beginning, the Art Show has figured out some things to make it go more smoothly, starting with several little bars throughout so you don't end up wasting all your art looking time in line for a drink. The whole thing seemed more spread out and manageable, even if I never figure out how to get to the food area before they close down. Oh, well. 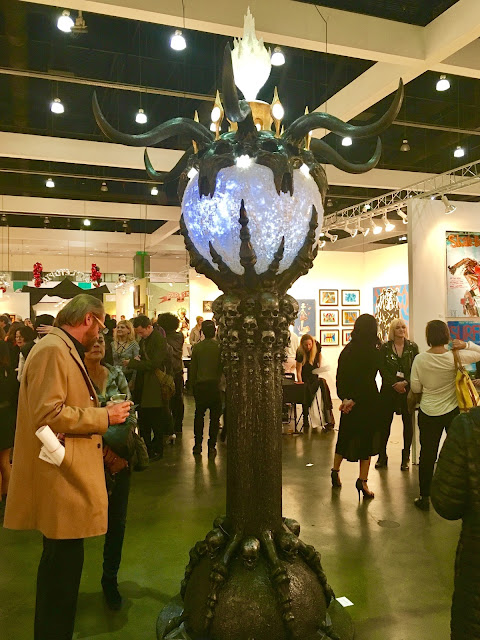 I think I saw my favorite pieces right out of the gate when Paul showed me the sculpture works by Larry Kagan, where he bends wires in such a way that their shadow on the wall is the real image. How cool! It always intrigues me how artists come up with their art, and this one takes the cake. Like, "I bet if I bend this wire just so, it will look like a chair in the shadow on the wall." What?! Smartie. 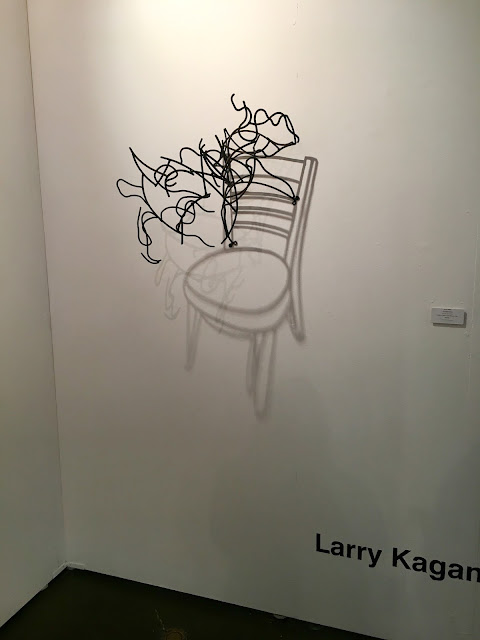 ... Or "What if I make sculptures entirely out of screws?" How do they come up with these things?! I'm actually always more interested in art like this than the classic landscape in a gold frame, but if that's your thing, there's plenty of that too. 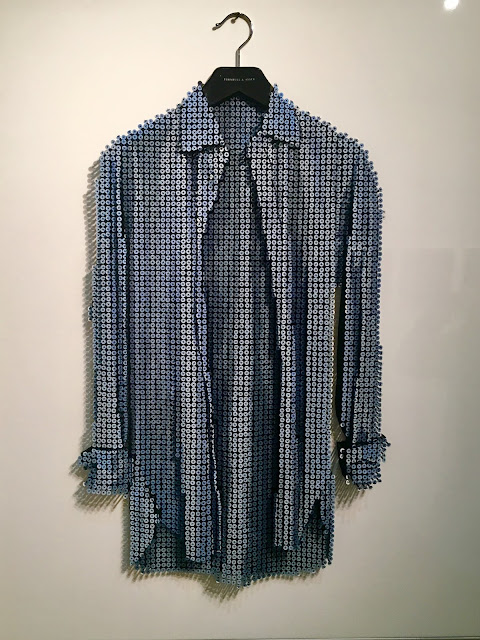 I've always been fond of the quote from Bertolt Brecht when he said, " Art is not a mirror held up to reality, but a hammer with which to shape it." - because it's so true, and this show was no different. There was a ton of art that reflected our times and current events ... and the reporters from all over the world to cover it. 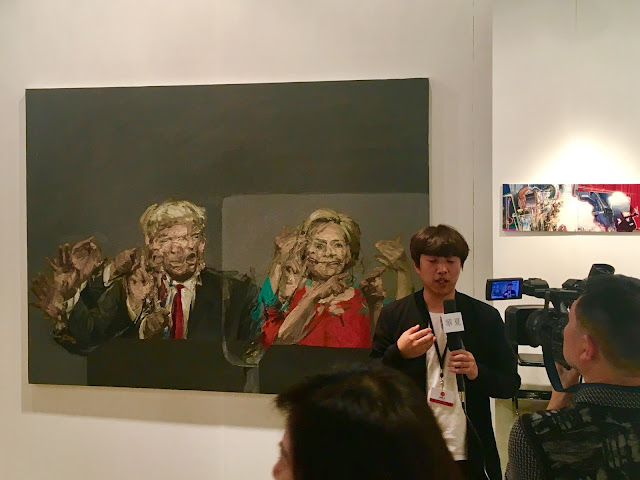 Much of art is derivative, of course, and there are many exhibitors who clearly have been majorly influenced by Warhol and Basquiat - like almost straight knock-offs - but then you get those bent wires and screws and the performance artists, and the relief that there is still some original thought and creativity left in the world. 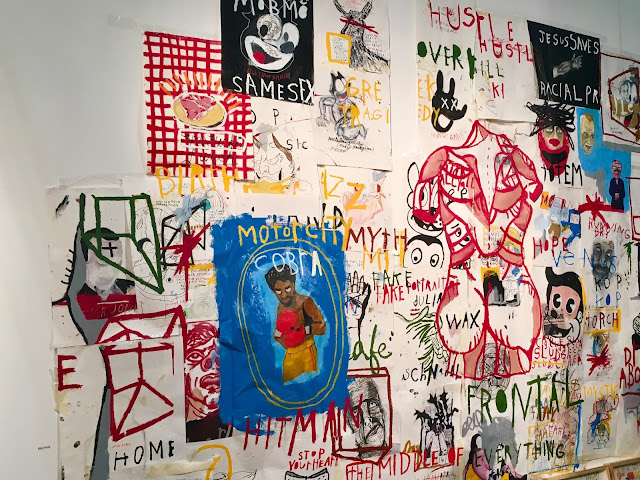 The performance art was all at one end this year, and though we missed a lot of the action/performance of it by the time we got to that side, it was still cool to see what people are up to. An inflatable amoeba type thing with painted dancers cavorting around it was interesting ... 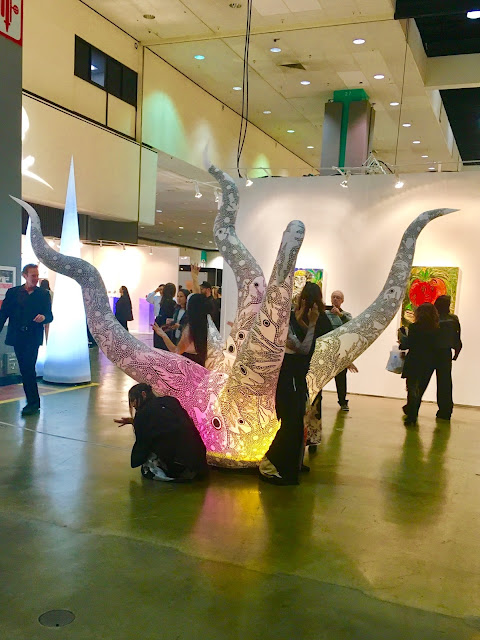 An invitation to destroy a couch had viewers sitting and watching the destruction while "Pennies From Heaven" played and pennies DID fall occasionally from the Heavens (ceiling). 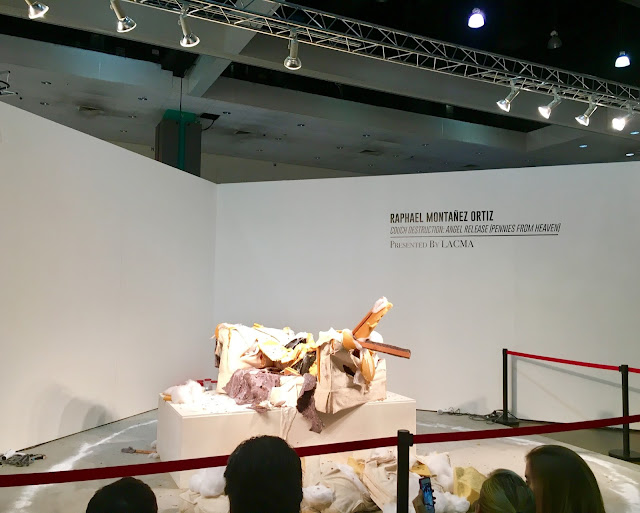 There was a bloody forest where limbs were dismembered that we missed (and I'm fine with that), but we very much dug the pink carwash thing buffing out silver "LA." letters, that so perfectly matched my friend Deb's arty get-up that people thought she was part of the installation and asking her for photos. Awesome. 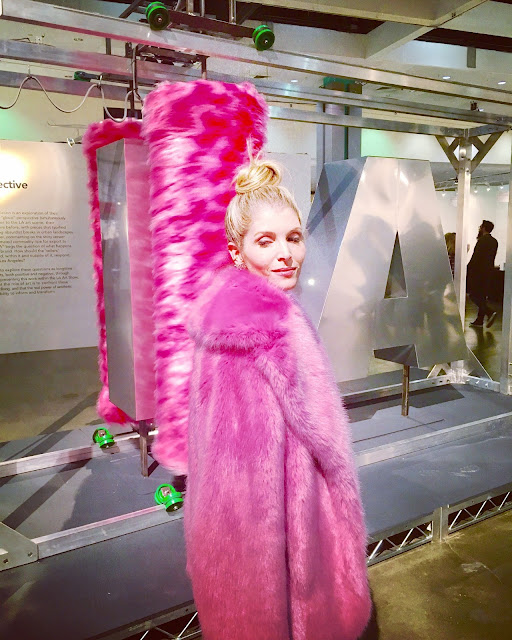 I very much enjoyed the live painting that featured street artists like bumblebeelovesyou (who I also love) creating one of his whimsical, happy childhood pieces ... 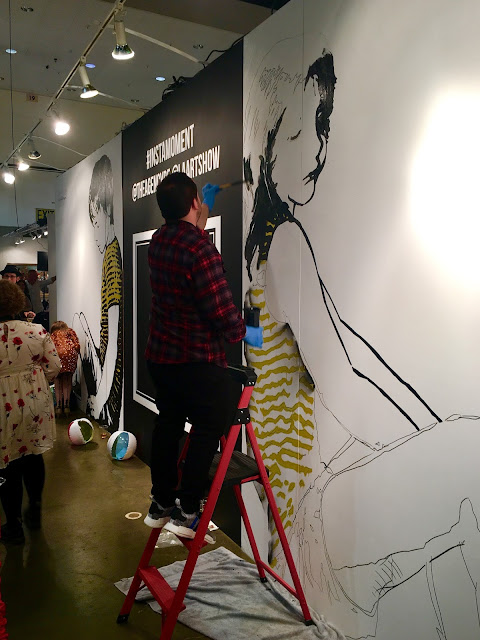 ... and Venice's own Jules Muck there doing a self-portrait, showing this art world that she has indeed arrived. 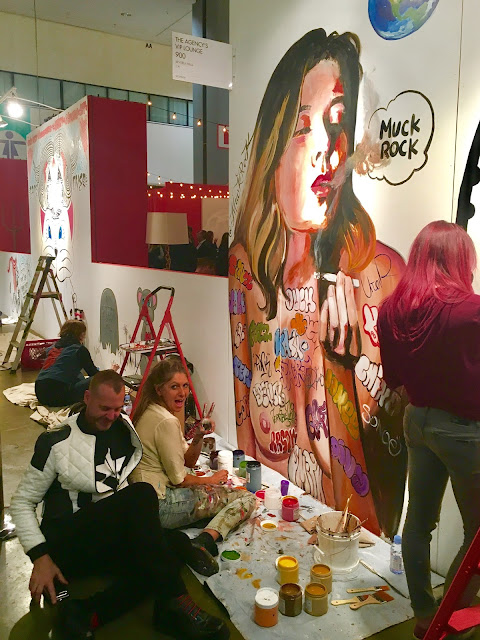 My favorite section of the L.A. Art Show is always the Littletopia area, full of the latest, coolest stuff from artists who always seem to be the most up my alley. 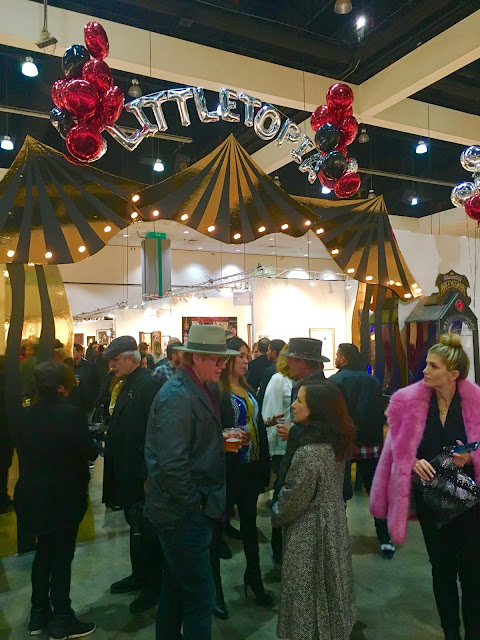 Littletopia is curated by my favorite gallery at the L.A. Art Show, the Red Truck Gallery, from New Orleans. I love me some folk art, and Red Truck is probably the very best place in the country to feature that wonderful genre. 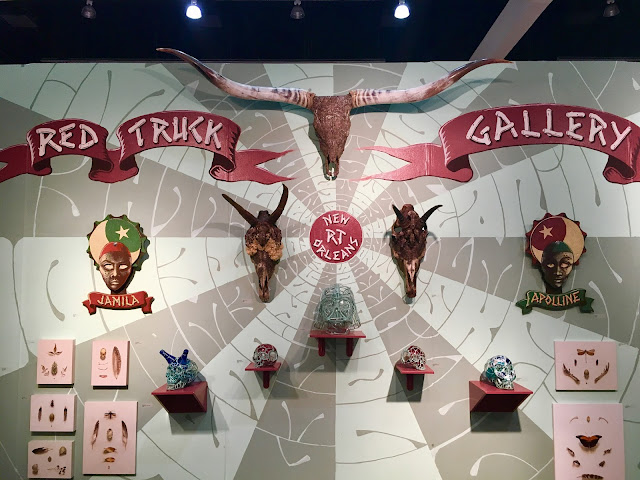 They had a bunch of new art this year, of which I think the one I most coveted was this piece that warns against the dangers of mixing Pop Rocks with Coke. Don't do it. 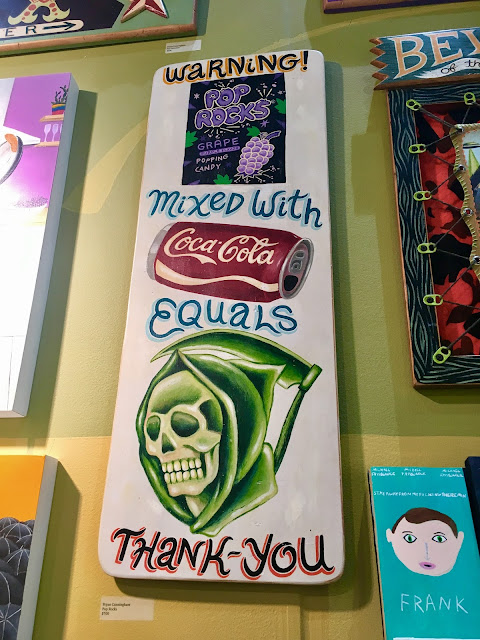 I loved the "Artist's Room" by the duo Dosshaus, where a couple hangs out and talks to you in an entirely monochromatic, colorless room where all of the items, including their clothes, were made from recycled cardboard. Deb also looked especially great here in her pink. 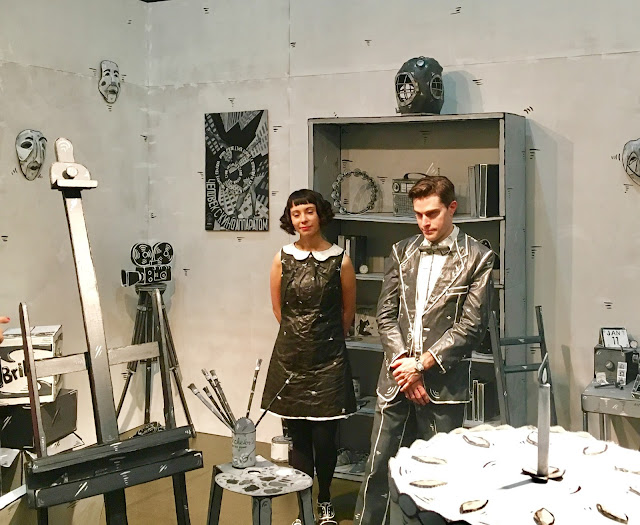 There was a surreal installation of stretched out, super-realistic people from Yi Hwan Kwon, that was also very popular with the Instagrammers in the house. To stand in front of them was to question your own reality - or sobriety - as so trippy were they. 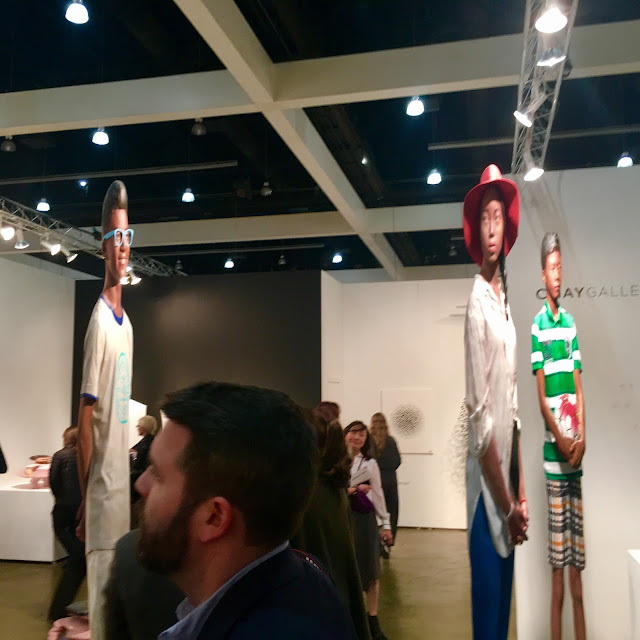 Another really great installation was the big portrayal "Cut-Outs" by Ramiro Gomez of a Los Angeles home. It uses negative space very effectively when the housekeepers and gardeners are cut out of the piece and erected in front of it, proving their importance. It reminded me of the great and important documentary, A Day Without A Mexican from Sergio Arau. Crucial viewing, both. 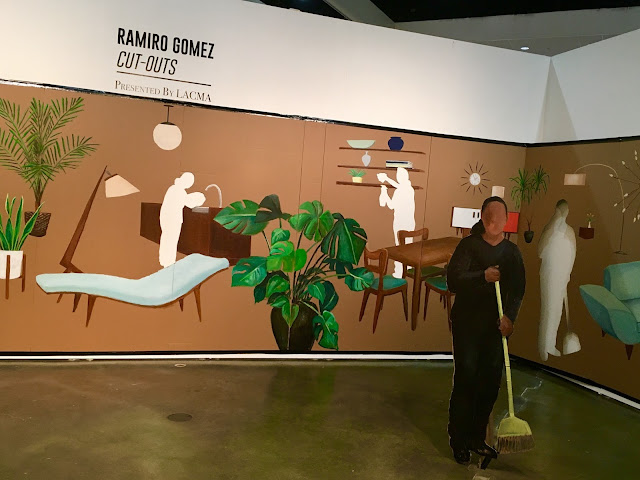 Coagula Projects brought an installation from Fred Tieken that would be very Venice-appropriate as it portrayed birds and skateboards and said, "No birds on skateboards allowed on this beach".  Only we would never stand for that. 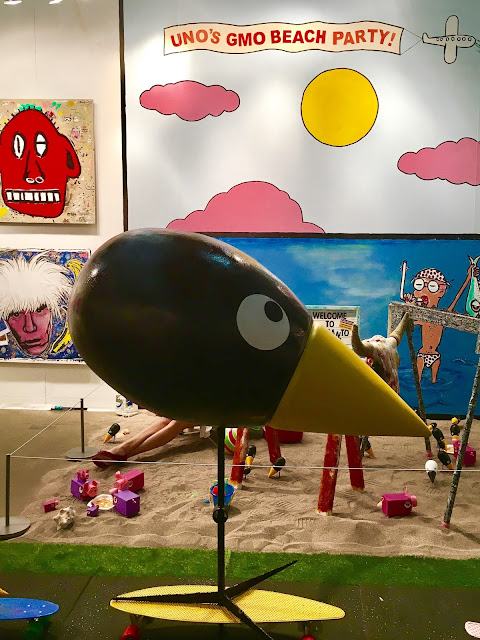 There was so much to see and do at this year's L.A. Art Show that it insists upon a return visit, when it's not so full of opening night crowds and people to catch up with. For every piece I saw, there were probably 100 that I didn't - or more. It's always so gratifying to attend events that are all about the art and the people that make it, and that recognize the beauty and importance of art in our lives. The show runs through January 15th, so you have until then to be "On The Scene in '17" yourselves. No excuses. 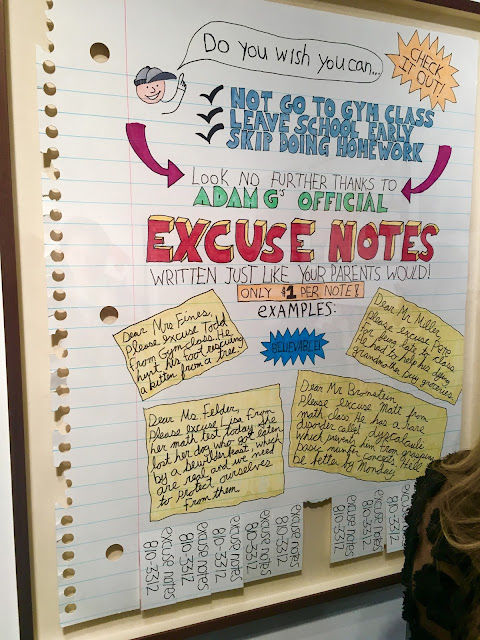 Thank you to all involved for another wonderful showcase of the world's art and artists, indeed helping to shape our reality. Hooray for Art!