The Anti-Inaugural Ball With Prophets Of Rage!

The United States of America inaugurated the ridiculous Donald Trump as our nation's 45th President last Friday ... and the fine citizens of Los Angeles were having NONE of it. Prophets Of Rage organized an Anti-Inauguration Ball for that evening, to state loud and proudly that this is not our President. We will not stand for a racist, misogynist, hateful leader, and the gauntlet has been thrown on that now from Day One. The evening's proceeds would go to RAINN, the nation's largest anti-sexual violence organization, showing that the people will take care of each other, now that we can no longer count at all on our government to do the right thing. 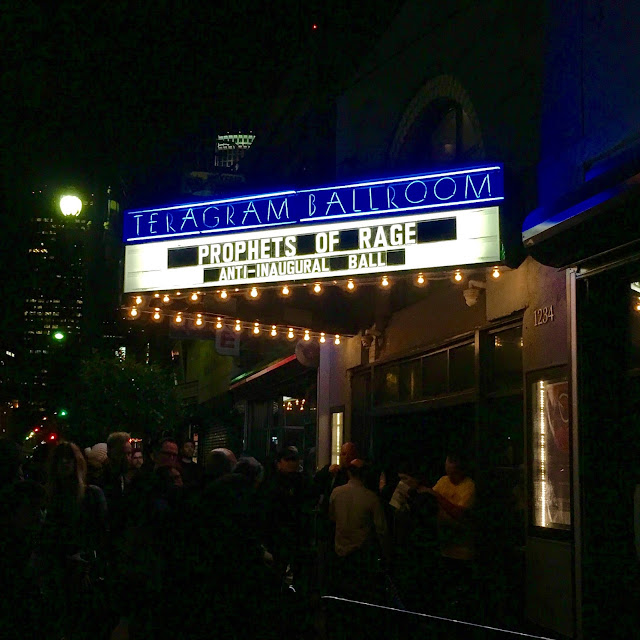 Trump wasted no time in eliminating pages for Climate Change, Native Americans, LBGT, oh, and for you GOP members, also shut down was the Veteran's Families page (explain that!), and is no longer available in Spanish. This President and his cronies fail to realize that he is meant to represent ALL of us, not just the ones he agrees with. And we are here to remind him of that, every step of the way. Friday night was just the beginning. We arrived late to the Teragram Ballroom in Downtown L.A., as you do on a Friday night. We missed the opening acts of The Los Angeles Freedom Choir, Tom Morello and his Freedom Fighter Orchestra, Jackson Browne, Jack Black and Tenacious D, and words from Susan Sarandon. Bummer, as I heard we missed "The Ghost Of Tom Joad" with Tom Morello's blistering guitar solo featuring the night's message of "Not My President" written on the back of his guitar. We walked in just as two young ladies gave a spoken word poetry performance that was as hard-core as anything we'd hear the rest of the night, speaking serious truth to power.

We squeezed up into the balcony, basically to save our own lives, as it was getting pretty heavy metal down on the floor, with the entire square footage pretty much the pit. It was practically a green house in there, as the joint was packed and sweaty with people venting their rage. Prophets Of Rage took the stage to their original tune, "Prophets Of Rage" and from then on ... it was ON. The momentum never let up for a second, and as much of a nightmare as the day began, it was being wrapped up in a gigantic fist of opposition. And it was powerful. At the end of that one, the mighty Public Enemy's Chuck D said, "Make America Rage Again! Make Racists Afraid Again!" to massive applause. It really felt in there like we got this. 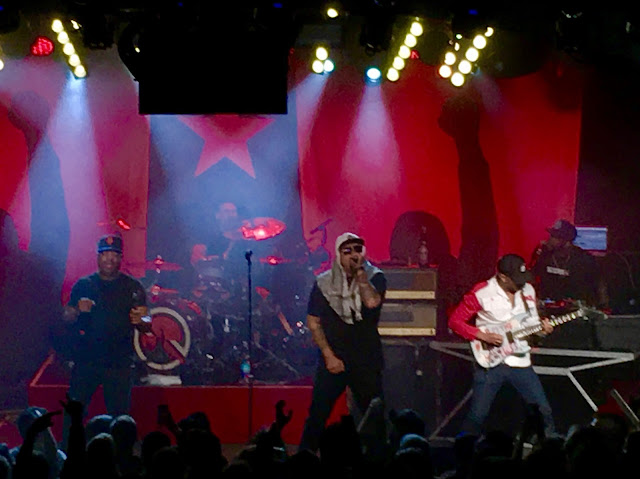 Rage Against The Machine's "Bombtrack" was up next, and it was pure molten lava in there. Sheesh. If we could only bottle that energy in there! "This is the Anti-Inauguration Ball with Prophets of Rage and great friends, and we're gonna continue to fuck your heads up!" shouted Cypress Hil's B Real, Co-MC for POR. Which they did next with "Guerilla Radio", and the ecstatic fans of Morello's guitar solos down front were visibly face-melted. Rightly so. That led into "Shut Em Down", another POR original, that features a crazy battle between DJ Lord and Morello on guitar, shredding back and forth. It was something else.

Morello gave a fiery speech with a five point plan to defeat the ugly injustices that are already going down ... following is the paraphrase of that incendiary moment:

Show up! Keep showing up!
Join up! Together we shape the halls of power!
Freedom - remember you have it!
Stand up! For minorities (who are now the majority anyway), LBGT's, Muslims, Women, ALL!
Rise up! Don't settle for what they spoon feed you, fight for the world you want!

"This is a No-Trump Zone! If someone tries to grab your pussy in the pit, it's your patriotic duty to break their fucking arm!" - this was met with hoots and hollers from both genders in solidarity. And it's about time. 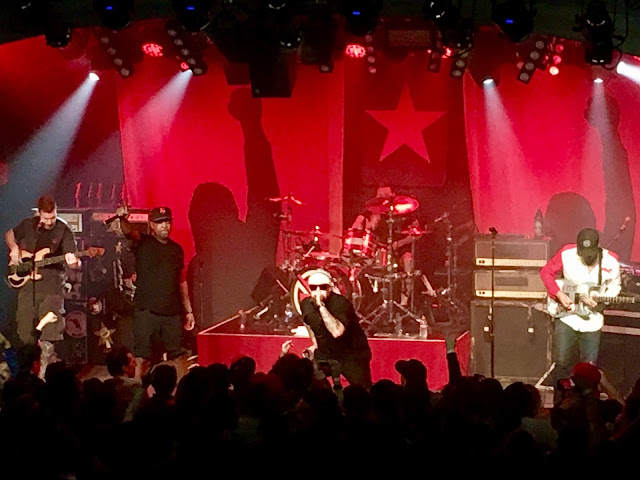 "Take The Power Back" ruled, of course. Then B Real said the whole thing was live-streaming on Facebook (and we all shouted out to those viewers) and said, "When you tell your friends that you raged the fuck out, you know what you did, you TESTIFIED!" - and they lit into Rage's "Testify", which tested the venue's earthquake fitness. It survived, just barely.

Vic Mensa rapped his "16 Shots" and then joined Chuck D and B Real for a medley of the Cypress Hill/Public Enemy hits that made them the legends that they are. "Can't Truss It/Insane In The Membrane/Bring The Noise/Ain't Goin' Out Like That/Welcome To The Terrordome" kept the place hopping until they brought out Everlast (!) for "Jump Around" and then it was JUMPING. All around like crazy. People were so happy to be blowing off the steam of this crazy election and awful injustice happening right in front of our faces, the joy in being together in solidarity was tangible. It only got better with the Rage classic, "Sleep Now In The Fire" when we all sang along, fists raised.

There was no time for a breather, as B Real said, "You're all in for a treat now..." and Morello began the instantly recognizable guitar intro for Audioslave's "Cochise"! People went absolutely mental when Chris Cornell bounded on to the stage and jumped right into the lyrics asking us to "Take it out on me!" It was awesome, and you'd never guess that 12 years had passed since they'd shared a stage together. Cornell's voice is as virtuosic as ever. They gave us a three song set with a melodic "Like A Stone" singalong leading into a fiery "Show Me How To Live" that made us all realize how much this band - like Rage - has been missed. It was capped off with a Cornell stage dive into the audience, punctuating the point that he was back, and happy to be so. The crowd went legit wild, and I was tempted to join him from the balcony. 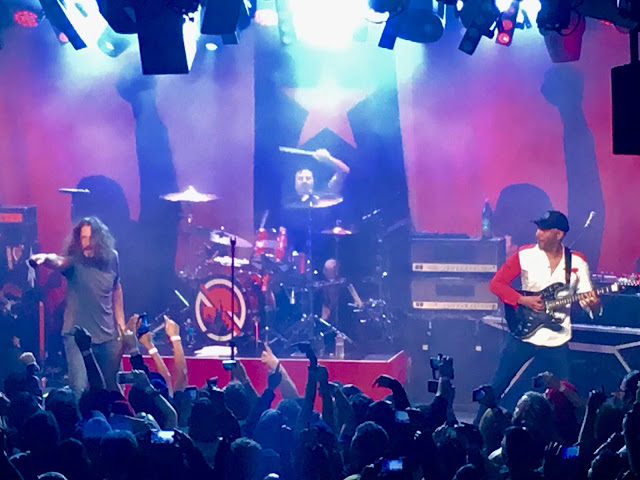 "Bulls On Parade" was all-time, and when we all screamed "Rally 'round the Family!" it was even cooler than ever because that's exactly what we were doing ... rallying around the American family that WE believe on ... as one, indivisible, with liberty and justice for ALL. Like we learned in Kindergarten. It's not that hard, GOP. You recited that same Pledge Of Allegiance we did. Back to basics, Everyone. Golden rule time. 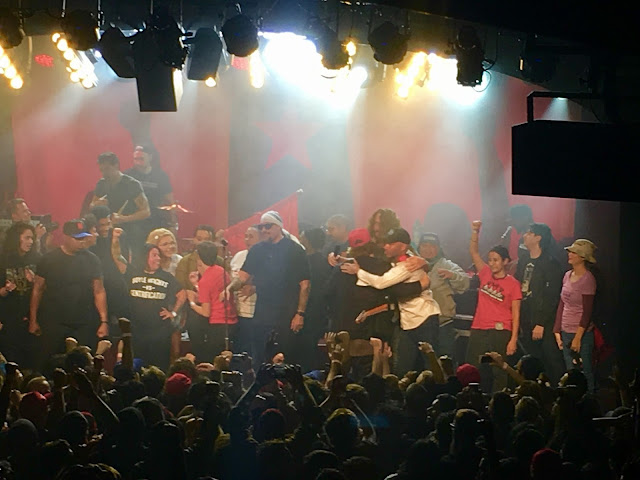 Jack Black came back to bring on and thank everyone involved, and the stage was soon almost as packed as the audience. The All-Star finale was - and had to be - Rage's "Killing In The Name" that climaxed with the entire building screaming "Fuck you, I won't do what you tell me!" at the top of our collective lungs. "Now is not the time for silence, make your voices heard!" insisted Morello, and that we definitely did. This evil new administration doesn't have a chance when the People unite. And I think they know it. If any one of them had been in the place on this night, they would be quaking in their boots, because as stated at the outset above - we're NOT HAVING IT.


A hoarse Morello shouted, "Take it easy, but take it!" as Bob Marley's ultra-appropriate "Get Up, Stand Up" filled the room with even more encouragement. This was about the best way I can imagine having spent the night of one of the saddest days in our country's history. Together with fellow Freedom Fighters, knowing the power is - and has always been - in our hands. It's up to us to continue to let The Man (which it mostly always is screwing things up) know that we're here. That we fight for what's right. That we will never be silent. That this Land is made for you and me and all of us. UNITED.

May the foes of justice tremble.