Hinano Café is a Venice institution. A BELOVED institution, made even more so by the fact that it's just about the last good, old-fashioned dive bar that we have left here in town after the demise of the also much-loved Roosterfish (as long gone are The (old) Brig and The Red Garter). Since we all love it so much, it's time we know the whole story. 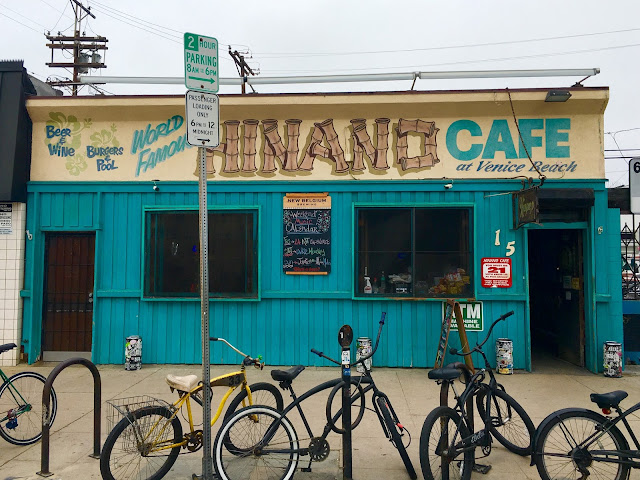 Back in the day, the Hinano's space was a place called Millie's Cafe. It was opened as Hinano Café (though everyone has always just called it Hinano's or as my friend Laura says, The Hinano) on December 23, 1961 by the original owner, Joe Larson (who recently passed away). He added a pool table in 1965, and locals and tourists alike have been shooting billiards in there ever since. Larson was an avid sailor, and once sailed a small boat all the way to Tahiti. Hinano is the big beer over there, and Larson brought both the name and the beer back to sell here. Larson owned this great, sawdust on the floor bar for 30 years until 1995, then moved to Oregon. A bartender who had worked there since 1965, Lee Glaser, took over for Larson, joining forces with two of the best customers, Andy Schelich and Mark Van Gessel (also a partner in Le Cellier up the street), to become the new co-owners. 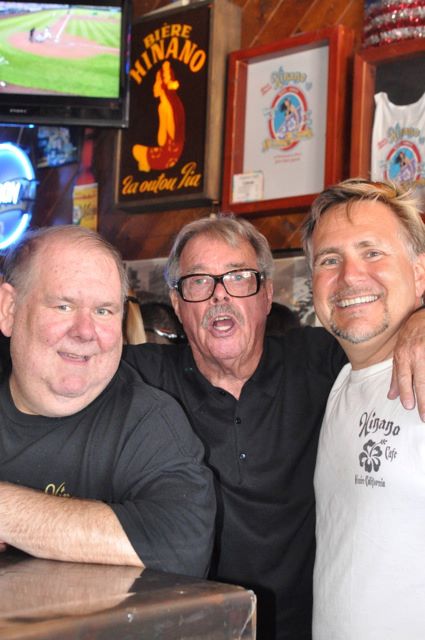 Glaser passed away in 2011, but as current bartender Melissa Monroe told me, "She still lives here." Yes, there are some ghost stories, like when they had a memorial at Hinano's for her, the fan quit working and started smoking. A film company had a photo of a neon sign on the wall inside Hinano's that was never there. That kind of thing. Good for her. When you find a place you love, you stick around.

It was important to both Schelich and Van Gessel that the divey charm of the joint remain intact. "We wanted to make sure it wasn't yuppified," says Schelich. "I'm not here to make a killing, I just love the place and want to keep it the way it is." And we love them for it. We also love them for the burgers they serve. The Hinano Burger is famous all over the world. For Venice folks, there really is no other competition. I can't really explain what's so good about it, it just is. They wanted to serve just basic bar food, and that's exactly what you get. A burger and a bag of chips. A couple other sandwiches, but you really want that burger. 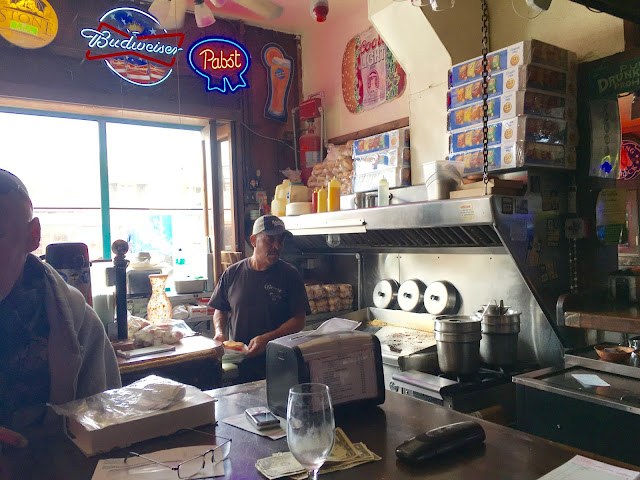 About seven years ago, the owners realized that if they were open early anyway to accept deliveries, they should serve up some breakfast while they were at it. So, now you can get breakfast every day until noon, and their breakfast burrito has quickly grown as storied in stature as the burger. I had never really gotten there that early, until a chef friend told me that they had, in his high opinion, the very best breakfast burrito also. I finally had it, and can absolutely concur. You know why? They put hash browns INSIDE the burrito. Yep. I can wait while you get one and return...

Ok, hi again. It was awesome, right? Well, everyone - from suits, artists, film crews, construction crews, the Venice Police and Fire Deparments (who have always eaten for free and gave Hinano's an honorary fire helmet to display), the homeless, night nurses when they get off duty, surfers, tourists - agrees with you. I sat there one morning with Schelich as one by one, regulars filed in and greeted him like family. "We get all variety of people in here," he said. "It's very friendly, there's a great bunch of people here. They're always down to Earth, even when I was just a customer here, I always felt welcome - that, and I liked the ice cold beers." 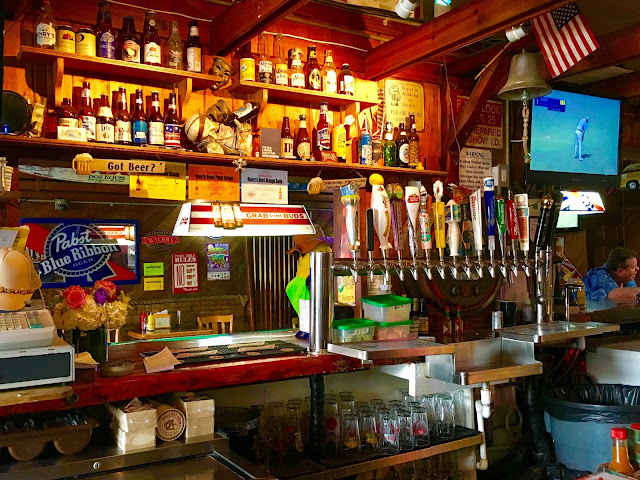 The ice cold beers. I've never had a colder beer in my life, anywhere. You roll in straight from the beach just steps away, maybe even with seaweed still stuck in your hair (and this is the only place in town I really feel fine with doing that), and they hand you a bottle of beer (specifically, a Red Stripe), and it's so frosty cold you're almost nervous your tongue will stick to it (I'm from Minnesota. I'm familiar with this happening). Schelich said he once got a pitcher so cold it slid down the bar toward him, and he said, "I'm home". They also now have 16 beers on tap, with both local beers, and as Monroe told me, "We keep up with the Yuppies a little bit with their fancy beer." True, they do, but they wouldn't even really need to. Monroe and Mary Alice Crowe (the manager for over 20 years) are my favorites, and Monroe told me that Hinano's was the very first place she came when she arrived in California, thought it was the best place in town, got a job there, and hasn't left. Love at first sight. Totally understand. 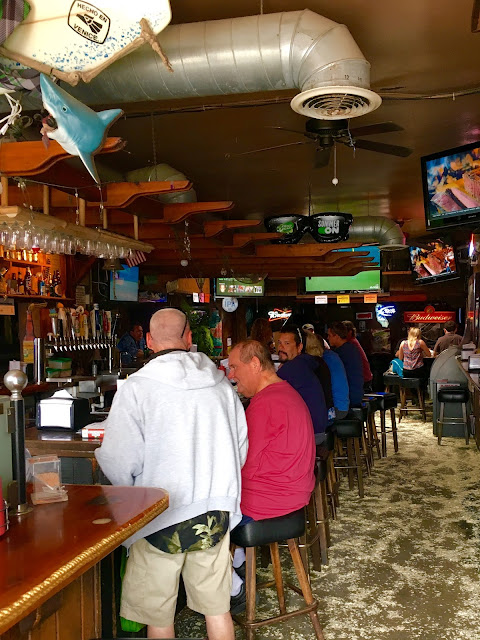 Hinano's is really a family feel, and they'd like for customers to treat it like their living room. To feel comfortable, and to treat it like they would their own home. To that end, Hinano's hosts buffets for holidays, like a pot of chili on for Monday Night Football, or free black eyed peas for everyone on New Year's Day. There is always free popcorn. They hand out roses to Moms on Mother's Day. They host Halloween with spectacular costumes coming through. Every Fourth of July, Hinano's becomes a beach headquarters for the neighborhood, with regulars and visitors coming through all day on their way to and from the beach and fireworks in the Marina (Just know that it's so busy that day there are no substitutions on the burgers - it's just plain or the works.).

There is live music every weekend, usually featuring great local bands, but there was also that one St. Patrick's Day that Billy Idol came in and blew the tiny roof off the place (I wasn't there, but I heard.). It's just always a blast, and one of the few places that you feel fine going in by yourself, because you'll either always know someone, or you'll make new friends real easy over pool and that cold beer. Even just walking by, it feels fun inside, like you're probably missing out on something good. That's Hinano's. 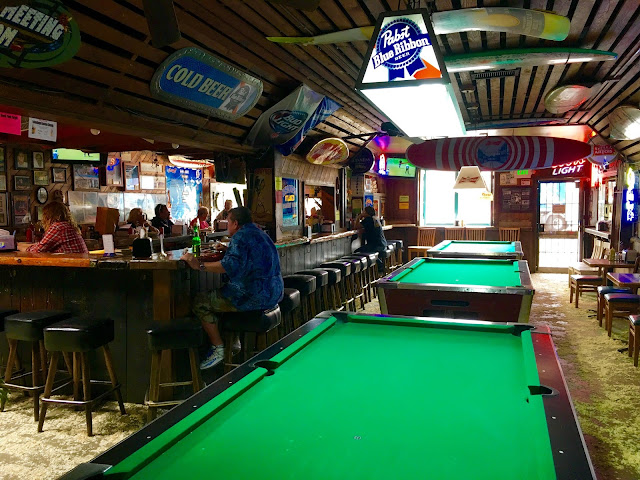 While we sat there at the bar at about 11 a.m. talking, a longtime Venice friend of mine came in, Chris White. I asked him how he feels about Hinano's, and he said, "Well. I just got out of bed, and now I'm here." Yep. It's that kind of place. Then, as we were talking, a guy came in off the street absolutely beaming. He told Schelich that Hinano's had been his favorite spot like 30 years ago, and he was thrilled that the place was still open for business. He was practically bouncing as he said, "I'm so happy I want to play that Pharrell song, Happy!" I get it, dude. 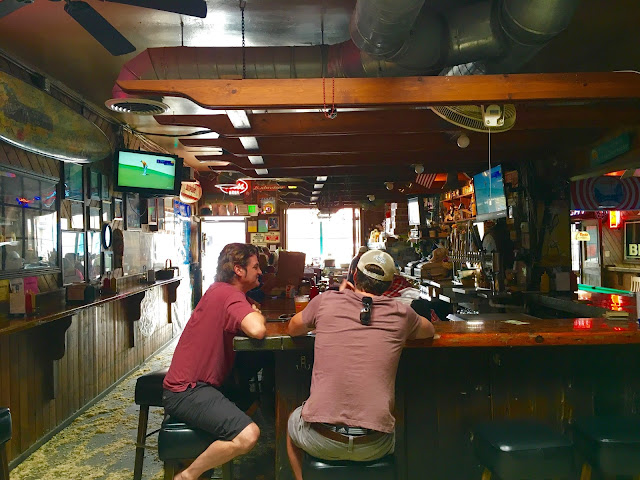 When the happy patron left (with a spring in his step), Schelich told me that happens all of the time. "So many people come in that met their husband or wife here, they'll bring their grown kids and tell them this was their spot 40 years ago." I love that so much, and that is why we love Hinano's so much. In light of all the good old places getting priced out and chains moving in and all that, I voiced concern that we would just be crushed should we have to lose Hinano's. Schelich reassured me, saying, "We've been around so long, we have a great landlord, and we're not going anywhere!" I'm not sure if it was the waves or just massive sighs of relief that I heard then, but we're all good. And so is Hinano's.

See you there! Soon.